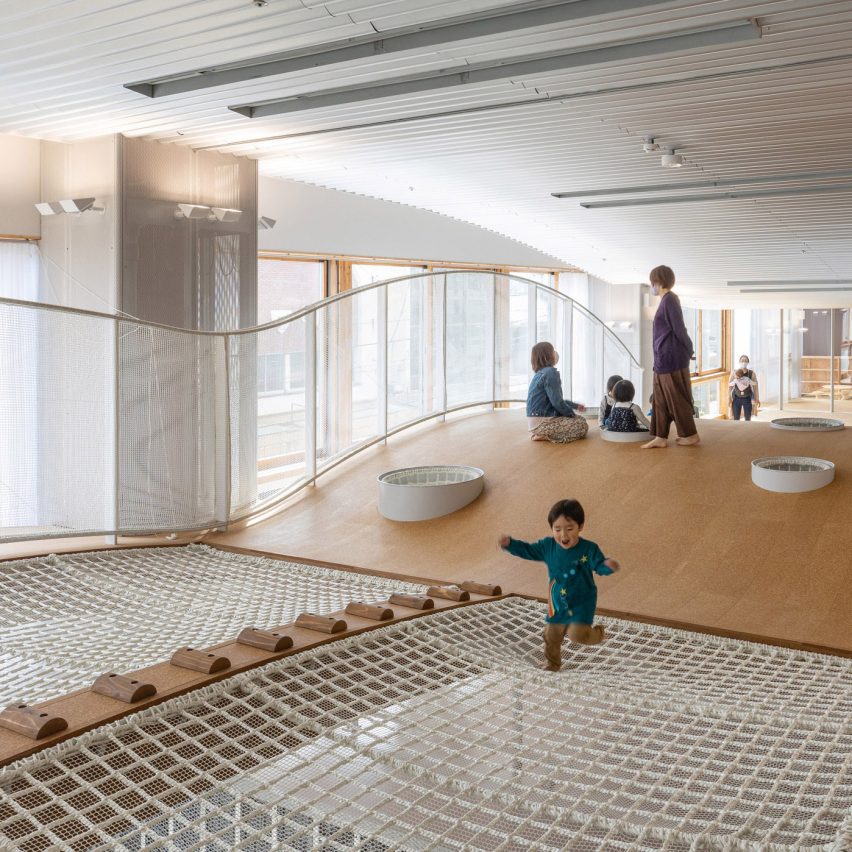 Japanese studios Unemori Architects and Teco Architects have turned a commercial building in Kitakami, Japan, into a health and childcare support centre, adding a new facade as well as undulating floors and ceilings.

The two studios gutted and converted the first two floors of the eight-storey building using materials including corrugated polycarbonate, wood, and textile mesh to give the space a more tactile feel.

The 4,000-square-metre space encompasses health and childcare support facilities as well as a public meeting space for the city of Kitakami.

A glass-fronted facade and sliding doors now welcome visitors into a large entrance area and further into a multi-purpose indoor plaza, with spaces designed to feel more open and relaxed than is usual in commercial buildings.

“In contrast to the existing rigid and closed space, I imagined a space like a park where many people can freely interact and spend time,” Unemori Architects founder Hiroyuki Unemori told Dezeen.

“The idea was to create a paradigm for a contemporary conversion of a rational commercial building, which can be found in any city, into a park-like place where people can relax,” added Chie Konno, architect at Teco Architects.

The ground-floor plaza, which houses a reception and a cafe, functions as the entrance and waiting area.

From here, visitors can enter surrounding rooms for medical checkups and consulting, as well as an exhibition room, cooking space and childcare support centre.

The architects playfully subverted the building’s original interior, which was laid out in simple rectangular grids, by adding undulating ceilings and floors.

By creating the undulating ceiling on the ground floor, the studios ensured there was enough space for medical vehicles, while also adding a wavy floor for the playground above. This floor is partly made from mesh, creating a fun, soft surface for children to play on.

“We deconstructed the existing rectangular grid with softly undulating floors and ceilings that overlap the rigid structure of the room,” the architects said.

“This creates a shift and softness in the space. The dimensions of the undulating ceiling are determined by the height of the ceiling for the examination vehicle and the duct space for the equipment.” 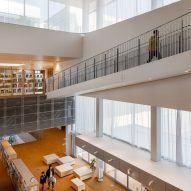 “In addition to such functional aspects, the height changes little by little, creating depth of space, also creating the shadows of the light ceiling,” the team added.

The architects decorated the exterior of the building, which was built in 1999, with an undulating eave to mirror the new floor and ceiling inside.

“To show the structure of the original building, we chose transparent materials such as punching metal for the pillars, polycarbonate corrugated sheet for the ceiling, and expanded metal for the slab section,” the architects said.

Materials were also chosen to give the space, which is used by everyone from the elderly to very young children, less of a clinical feel.

“We aimed to create an intimate space by using wood as much as possible for the touchable areas so that it can be used by children and the elderly,” explained the architects.

“In addition, the central entrance square is a versatile space where events can be held, and we aimed to create an open space where anyone can freely visit, for example students for studying, parents that are chatting with other parents and children, and for club activities,” the architects added.

The decision to convert an existing building into a care centre, rather than building a new one, could help people reassess existing architecture, according to Konno.

“Even if it is a modern building that does not necessarily have historical value, I think that by making use of that stock and changing its meaning and experience, it’s an opportunity to change our perception of other existing stocks,” she said.

“I think the diversity and continuity of time created by combining old and new things does have a huge potential,” Unemori added.

Unemori Architects and Teco Architects worked together on the project under the moniker UtA/Unemori Teco Associates.

Unemori Architects has previously designed an “earthquake-proof” community centre as part of the rejuvenation of Fukushima, as well as a house in the city of Takaoka that is raised on stilts.

The photography is by Kai Nakamura.