Dutch studio Barcode Architects has completed a house in the country’s Brabant region featuring some windows that angle inwards, and another that appears to have been extruded from the concrete walls.

Called Villa X, the house features concrete side walls, while its front and rear elevations are glazed. The aim was to enhance its connection with the garden setting, while providing the privacy demanded by the clients. 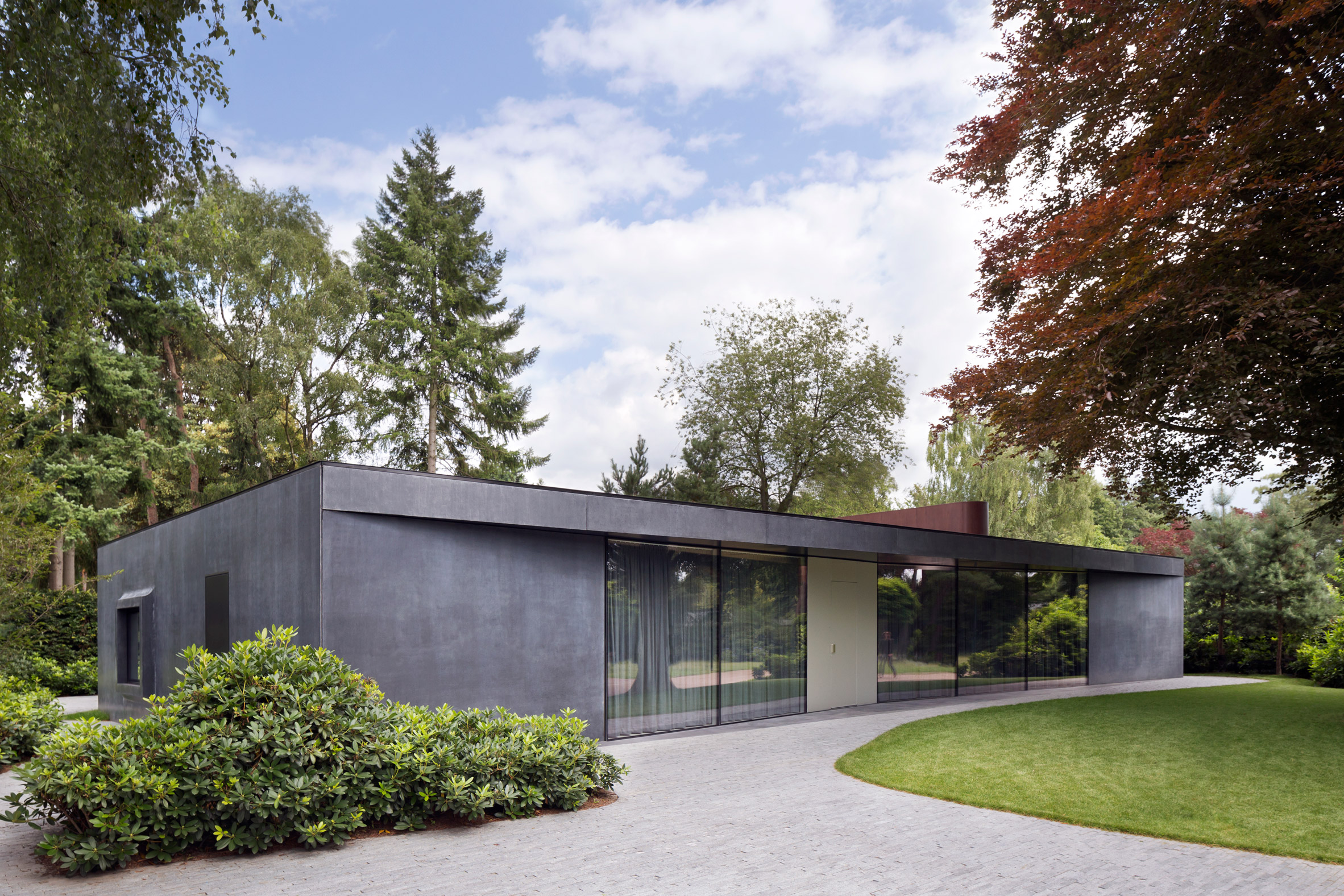 “Villa X combines solid and void in a geometrically minimalistic composition,” said Barcode Architects, which is based in Rotterdam.

“Based on the clients’ desires for both openness and privacy, we designed a living space that blends seamlessly with the garden, as well as enclosed rooms that would allow the couple to ‘close the door’.” 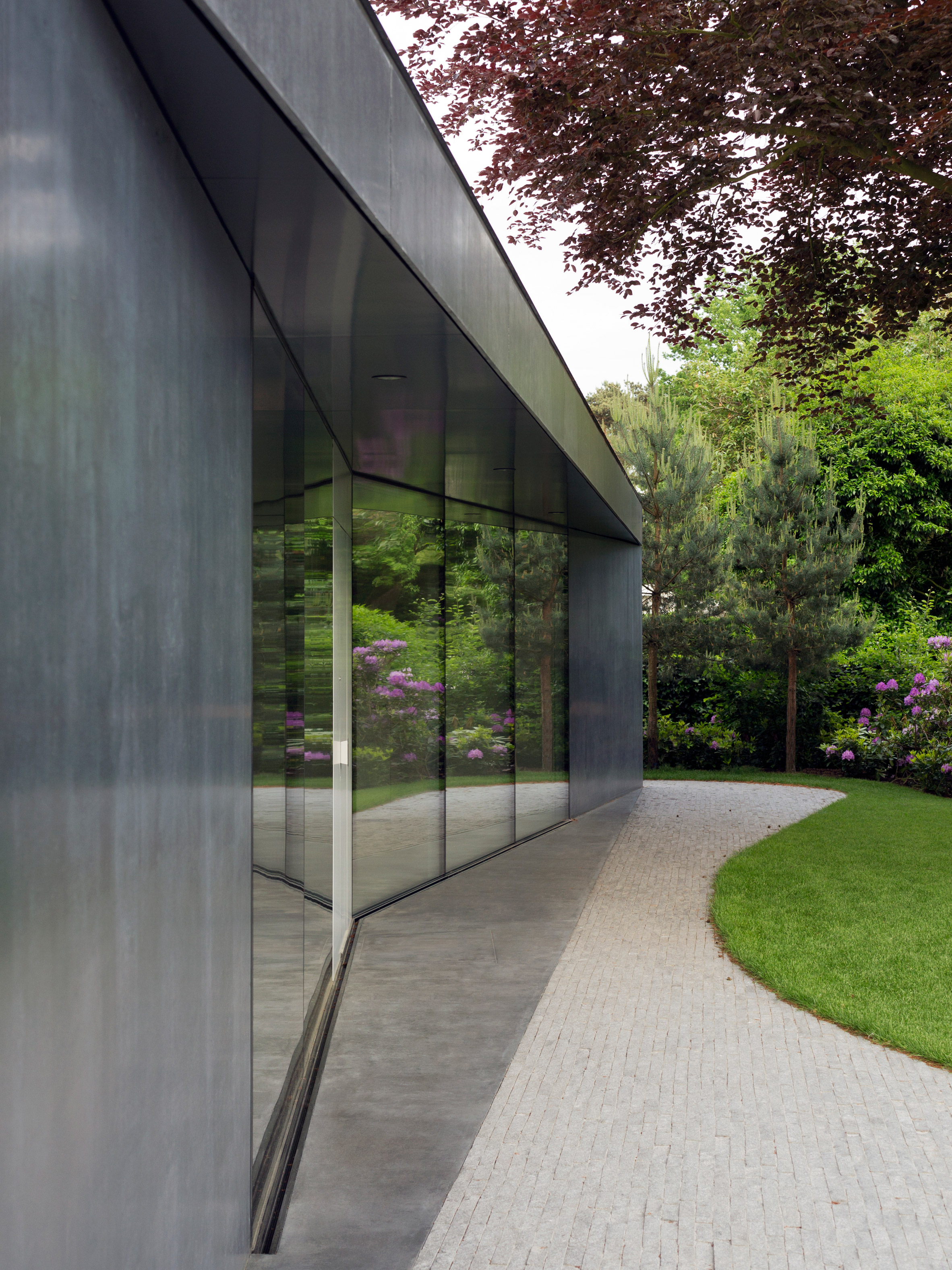 The house comprises a simple elongated form, which maximises sun exposure for the two long facades. These glazed walls, which frame the building’s main living spaces, folds inwards at the front and back, creating small pockets of shelter facing both sides of the garden.

One of these sheltered areas forms the building’s entrance, while the other opens onto a secluded terrace. 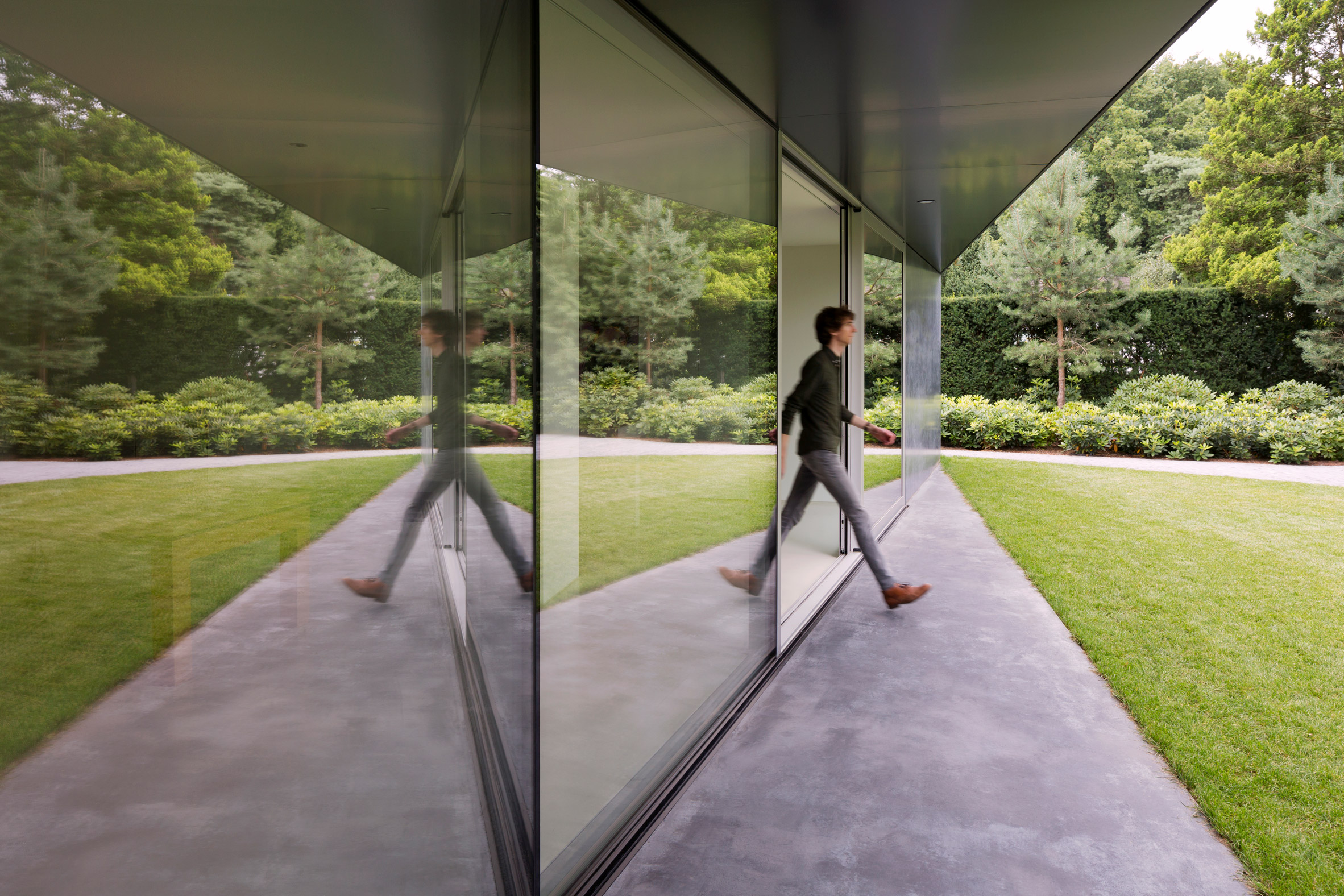 The opaque side walls conceal the property’s bedrooms. These 15-centimetre-thick walls are formed of pre-cast anthracite concrete, intended to feel hefty and protective, and have a smooth, reflective finish produced by hand-polishing the surfaces multiple times. The wall of the guest room incorporate the protruding window, which was cast into the concrete to create smooth, curving edges.

“A malleable and ductile quality is suggested by the protruding guest room window,” the studio suggested. “It is cast into the wall, appearing to have been pulled out from an elastic surface.” 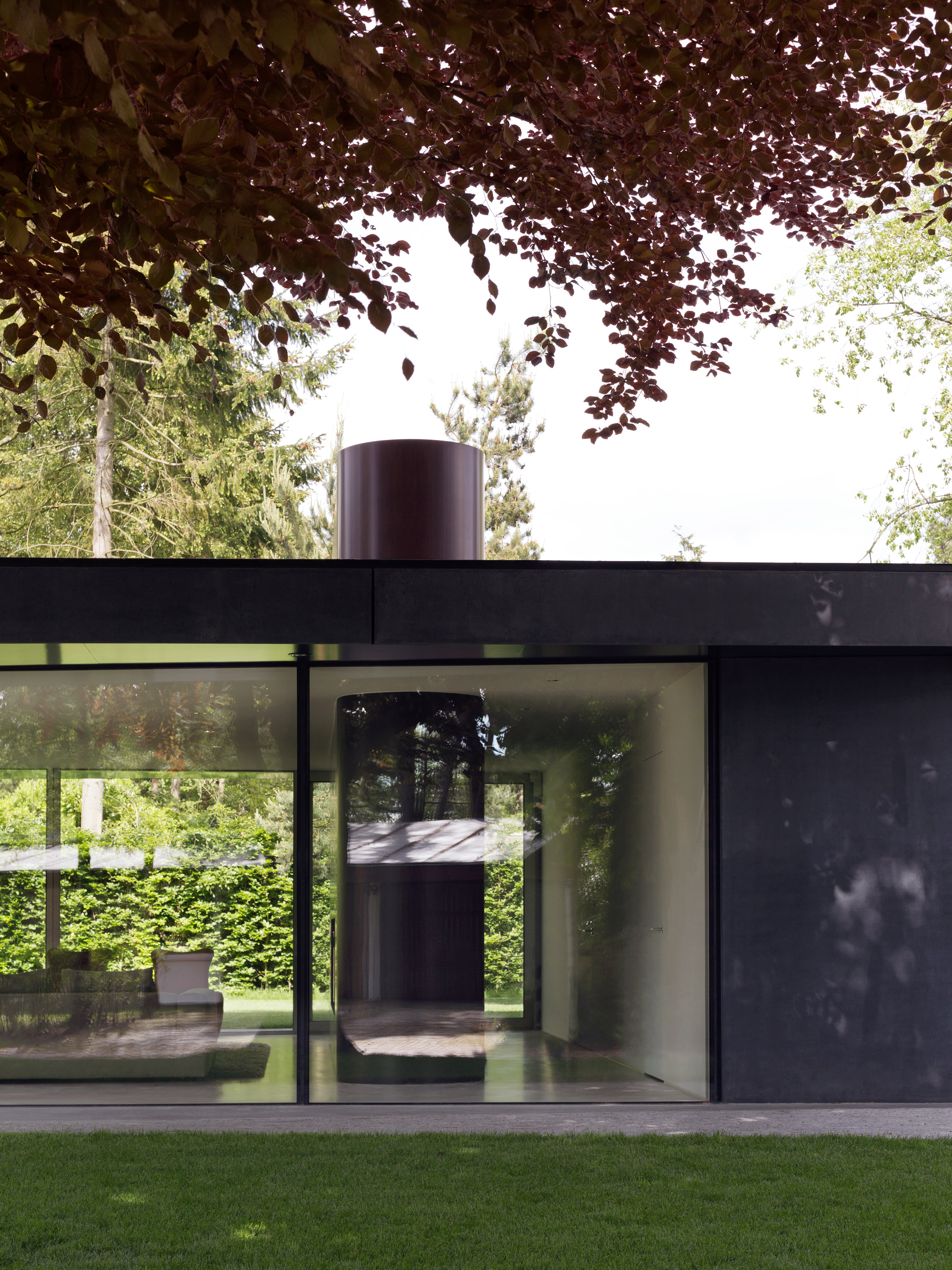 Sharp corners and detailing enhances the precise, geometric feel of the building’s exterior, emphasising the sense of the surfaces being carefully folded into position.

Inside the central living area, two core fitted-furniture elements that define the entrance, kitchen dining and living zones are the only interruptions to the open-plan space. 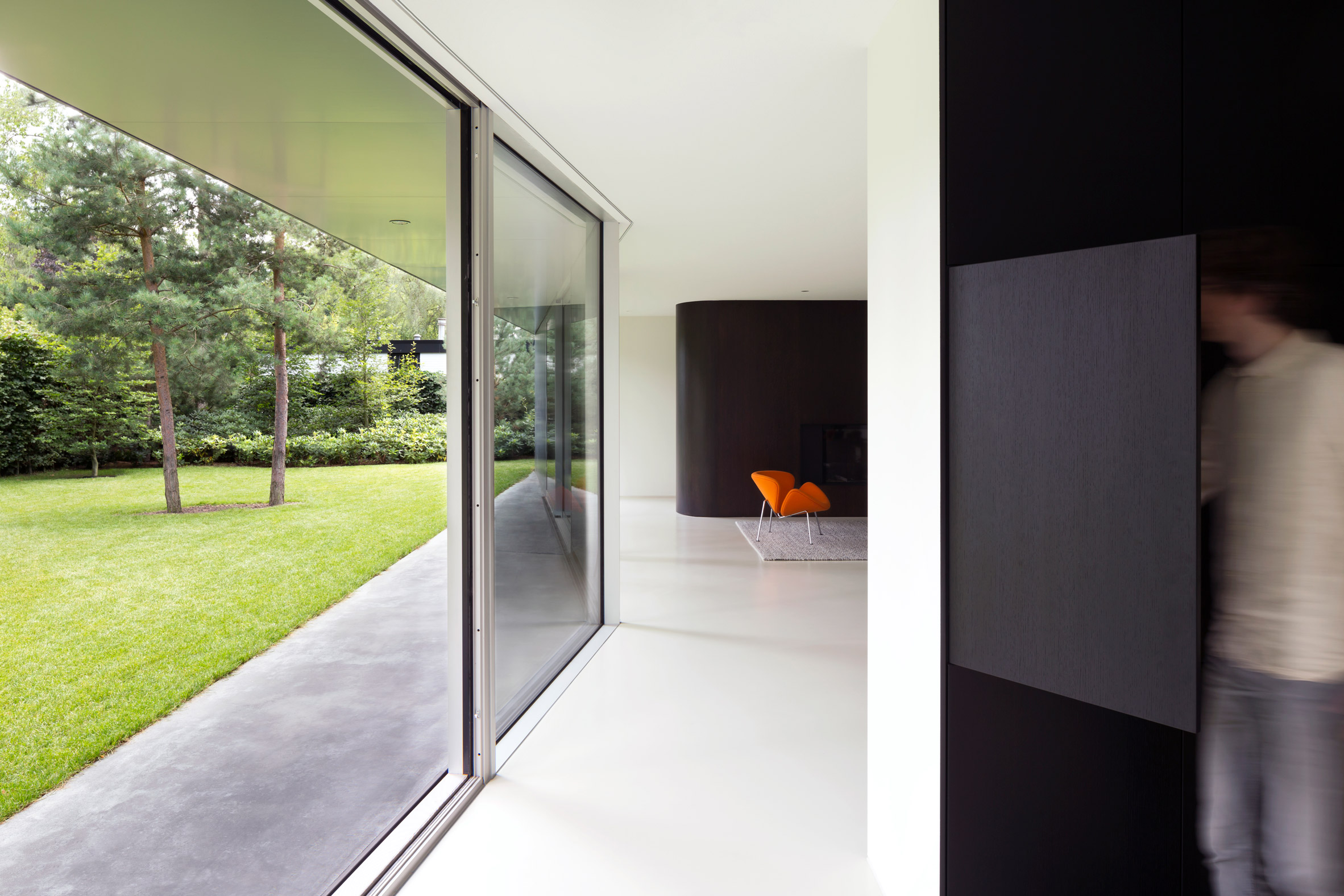 A T-shaped structure separates the entrance from the kitchen and dining areas behind, where the application of black-stained oak cabinetry adds warmth.

A curving unit clad in dark-stained bamboo flanks the living area and incorporates storage, a television and a fireplace. This structure extends above the building’s roof to form a chimney for the fireplace. 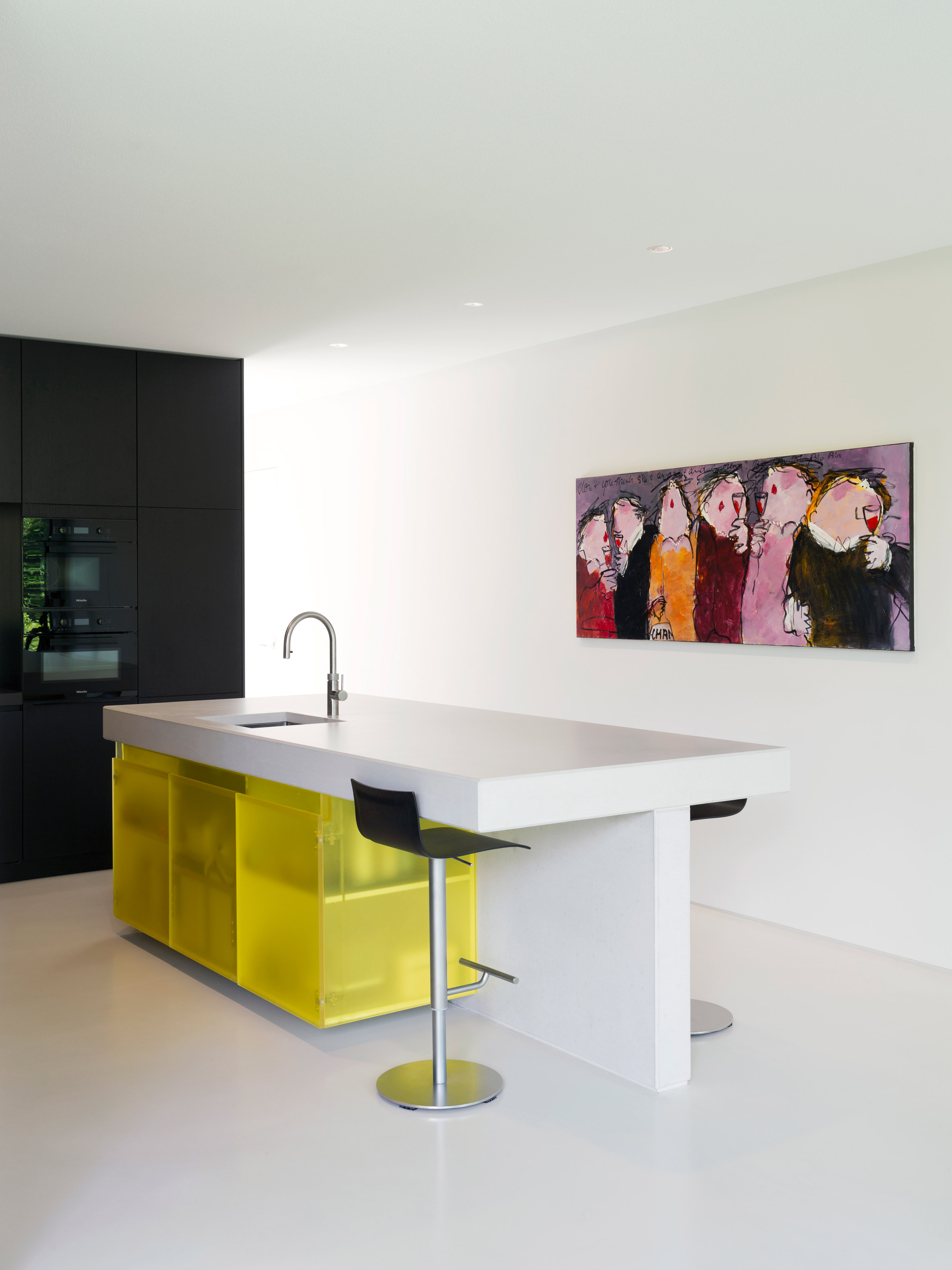 The darker tones of the built-in joinery contrast with the otherwise white interior, where a light resin floor helps to reflect sunlight around the space.

Colourful details are introduced through artworks and the decor of the private areas, including a restroom with MC Escher-inspired floor tiles and a mirrored wall. 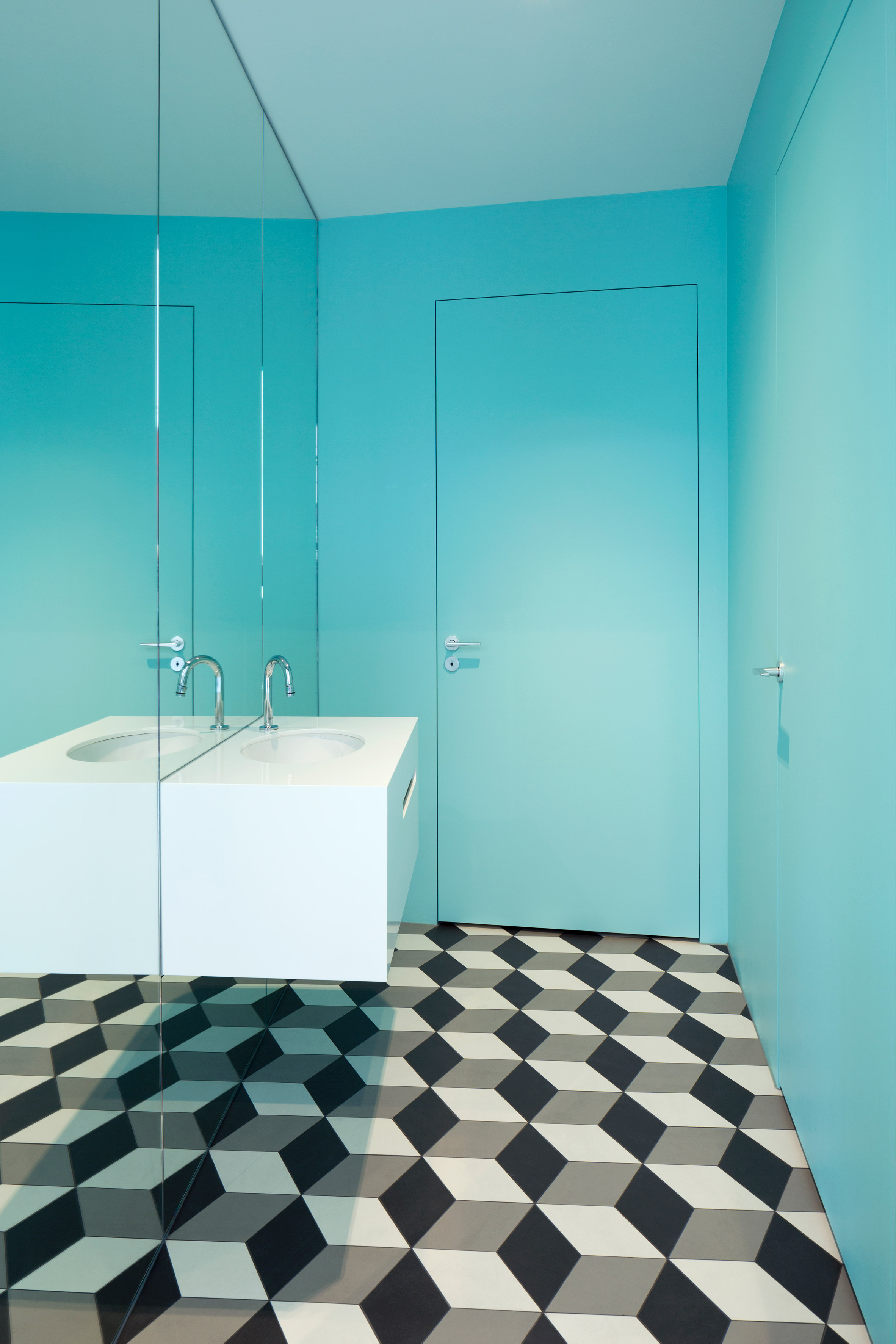 Barcode Architects is led by Dirk Peters and Caro van de Venne. Their previous projects include a renovated house in Belgium that was adapted to accommodate a display of hunting trophies.

The studio also collaborated with OMA on the design of a cross-shaped library in Normandy, and teamed up with BIG on a competition-winning proposal for a tower in Amsterdam that will step down to the surface of the IJ lake.

The post Villa X is a Dutch house with windows that protrude inwards and outwards appeared first on Dezeen.