Architect Vladimir Radutny has renovated an apartment in the iconic 860-880 Lake Shore Drive complex by Ludwig Mies van der Rohe in Chicago, using a restrained palette to show off the architecture and the views.

The 750-square-foot pied-à-terre is the second renovation that Vladimir Radutny Architects has completed in the modernist towers, which were completed in 1951 and are listed on the US National Register of Historic Places. 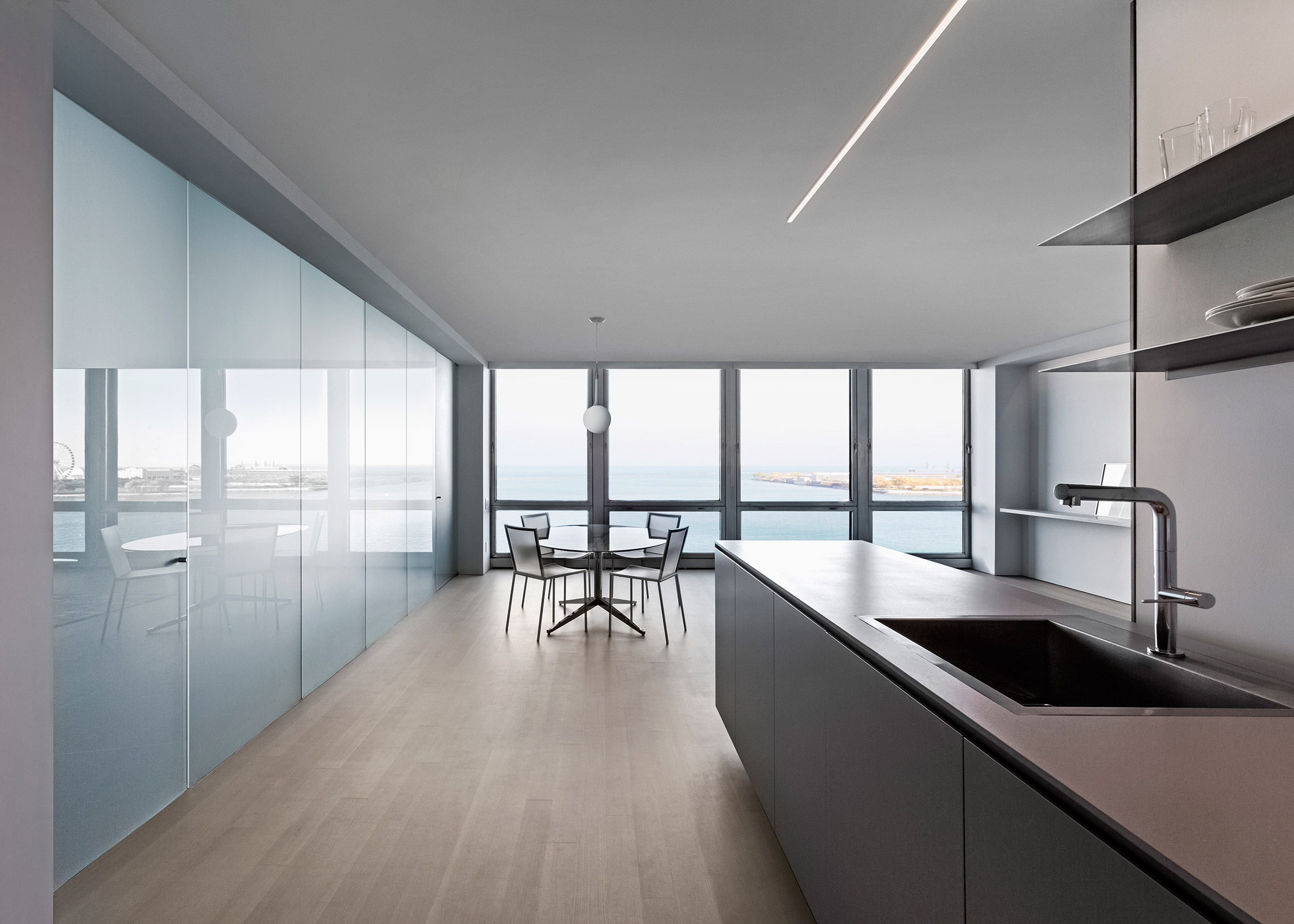 After Unit 3E, the firm was asked to overhaul Unit 9C by clients who use the apartment as second home.

Radutny opted for a cooler palette for this project, and opened up the layout to maximise the floor space and direct visual focus to Lake Michigan outside. 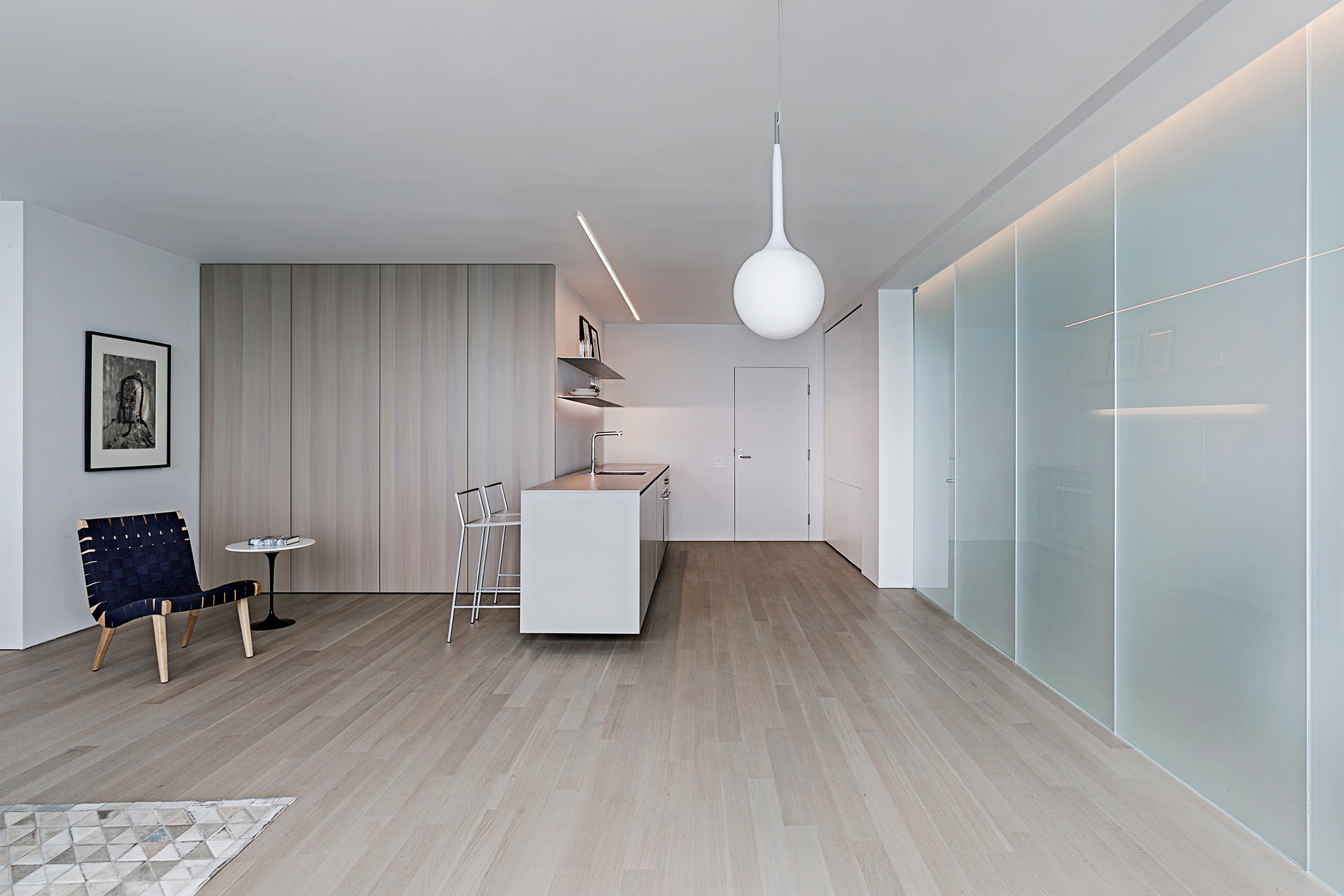 “By removing all of the opaque walls and introducing an architectural language of floating volumes and space-defining planes, we created the desired spatial experiences that did not previously exist,” said the architect.

A partition separating the bedroom and bathroom from the living space was instead created with floor-to-ceiling translucent glass. 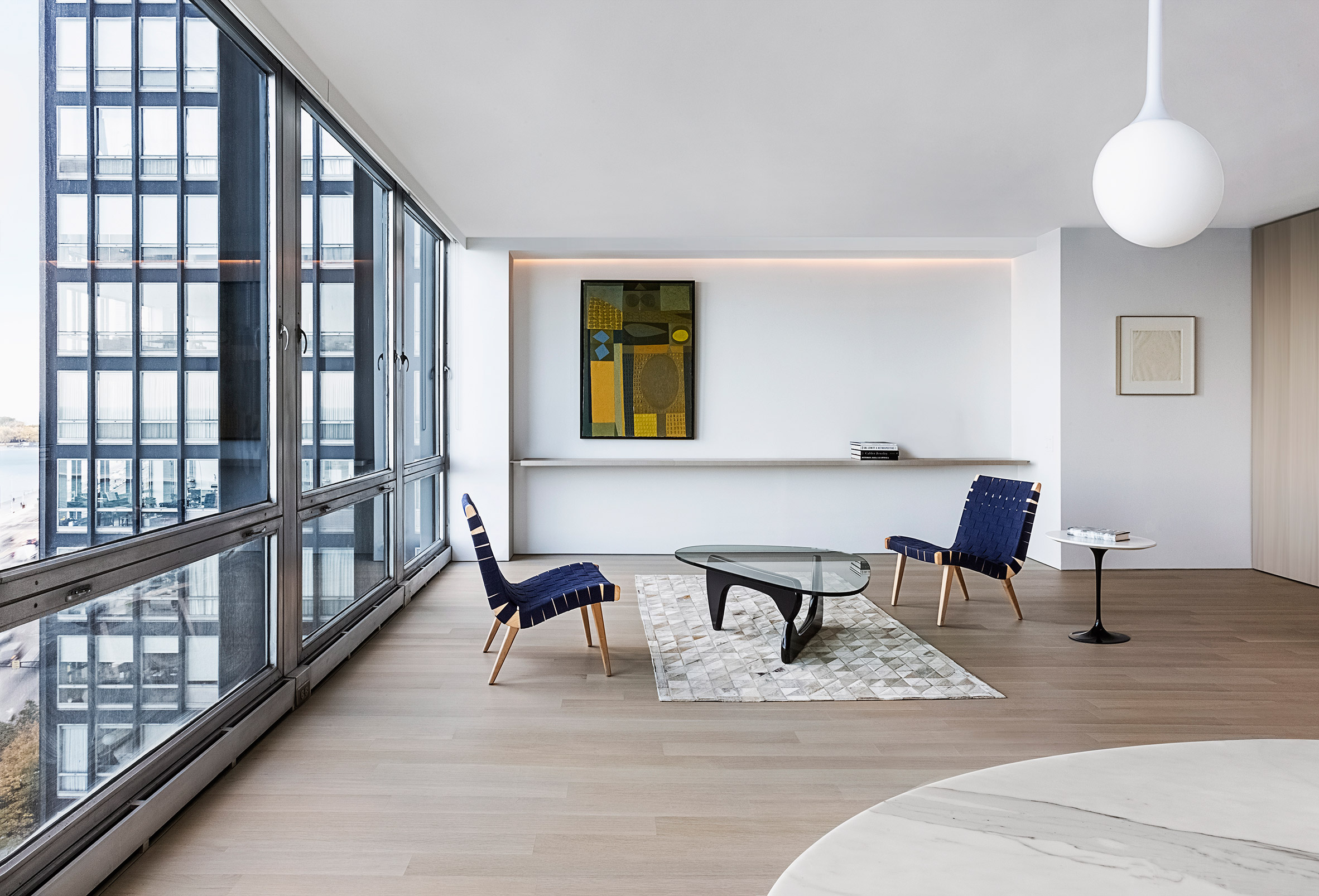 “The integration of a seemingly continuous glass plane provides privacy between the two primary living zones,” Radutny said. “However, its true function is to create a backdrop of illusion, capturing the expansiveness of the exterior, as well as the dynamic mood changes of the Great Lake.”

The sleeping and washing areas are, in turn, divided by a wooden storage volume that appears to touch neither the floor nor ceiling. 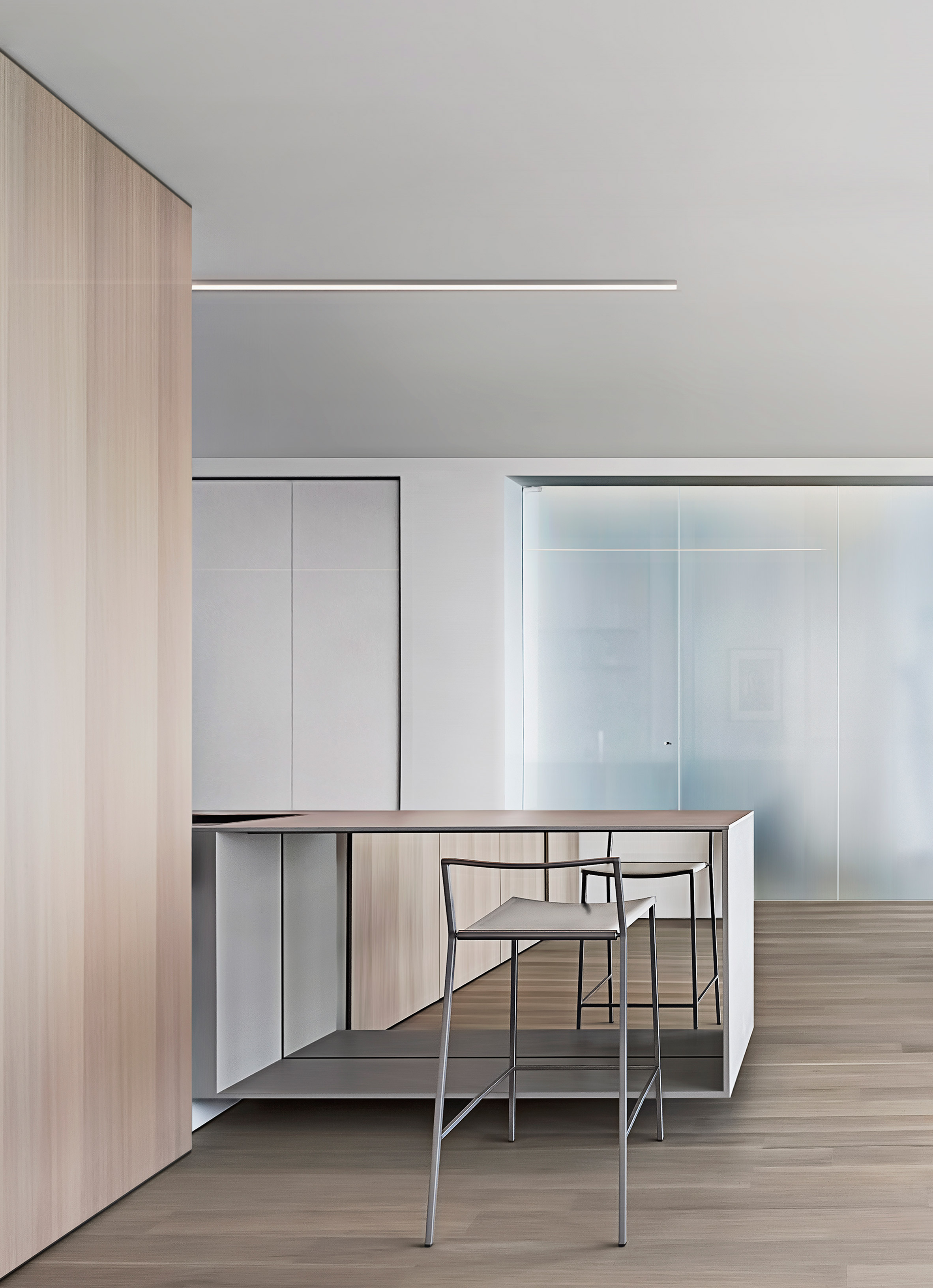 Beside the entrance, a kitchen island against a wood-panelled wall extends past the corner into the larger living, providing a counter to eat at. Its base also seemingly hovers above the floor, and its back surface is mirrored.

“As it extends deeper into the living space, a reading nook is formed at the back of the projection, offering a sense of refuge inside of an open plan,” said Radutny. 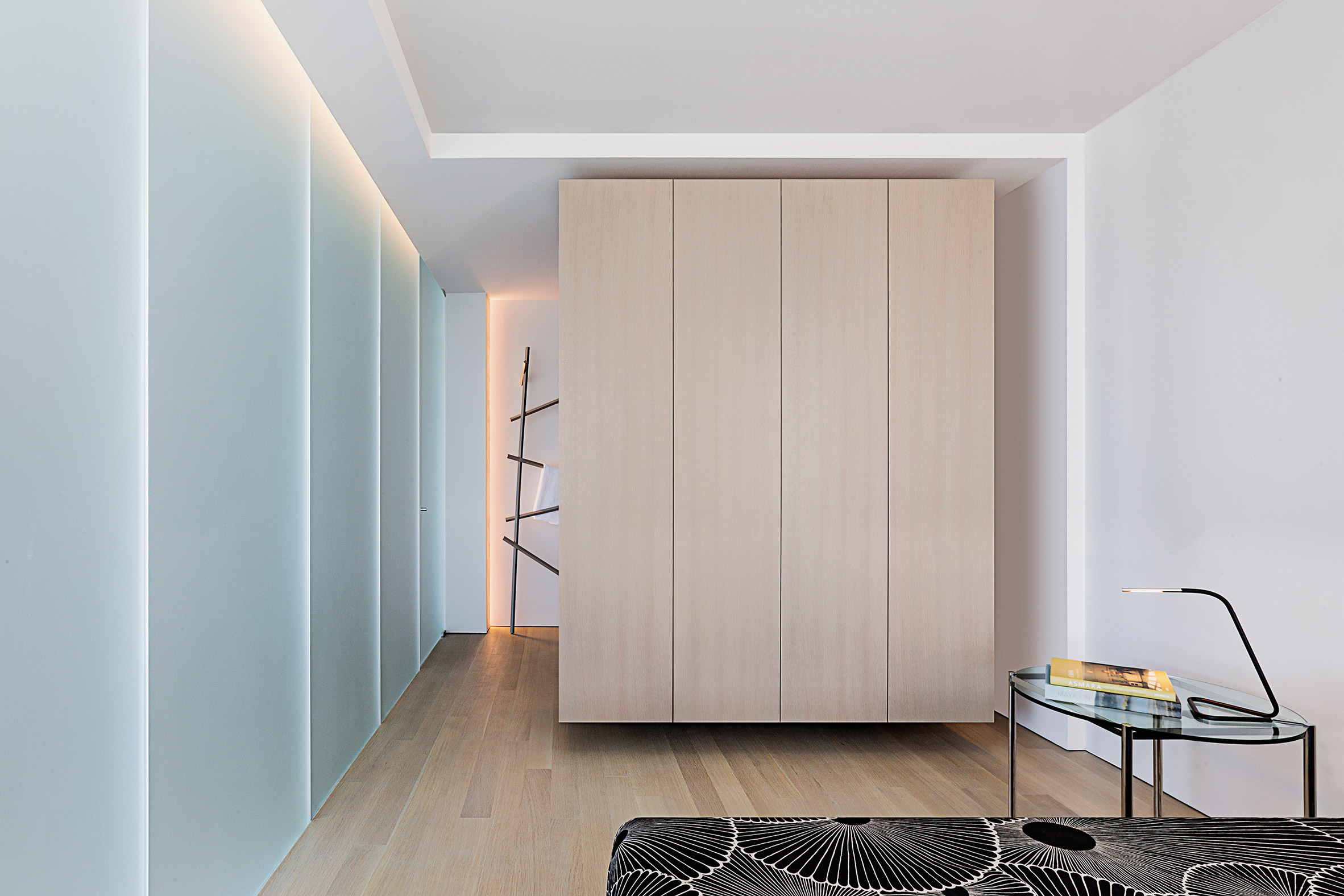 A circular freestanding dining table, a pair of lounge chairs and a couple more tables are the only other furnishing in the bright space, as everything else remains tucked away in cupboards.

“While placing emphasis on the refined expression of the building’s minimalist tradition, a quiet living space is formed for contemplation and refuge in the sky,” the architect said. 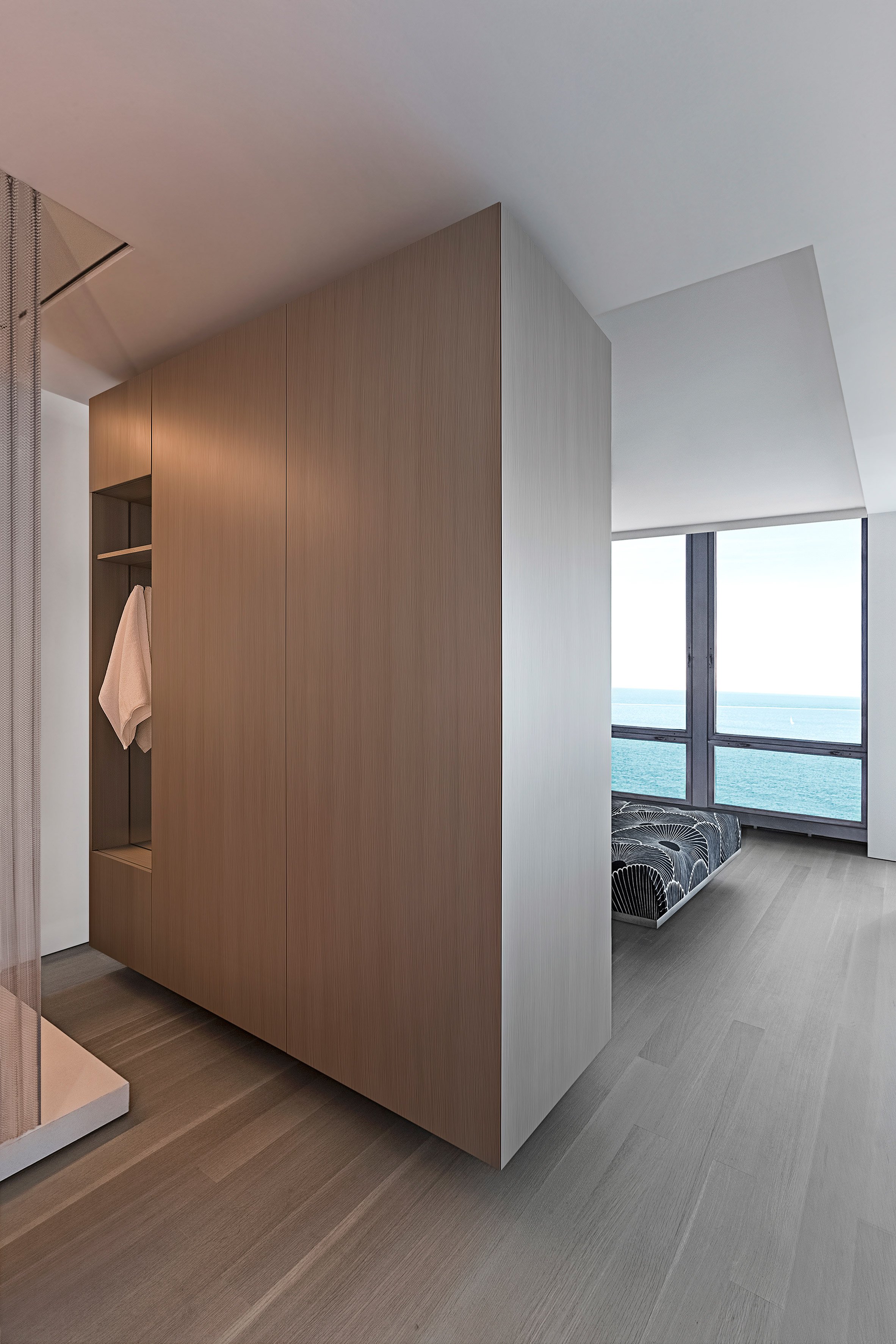 Photography is by Bill Zbaren.