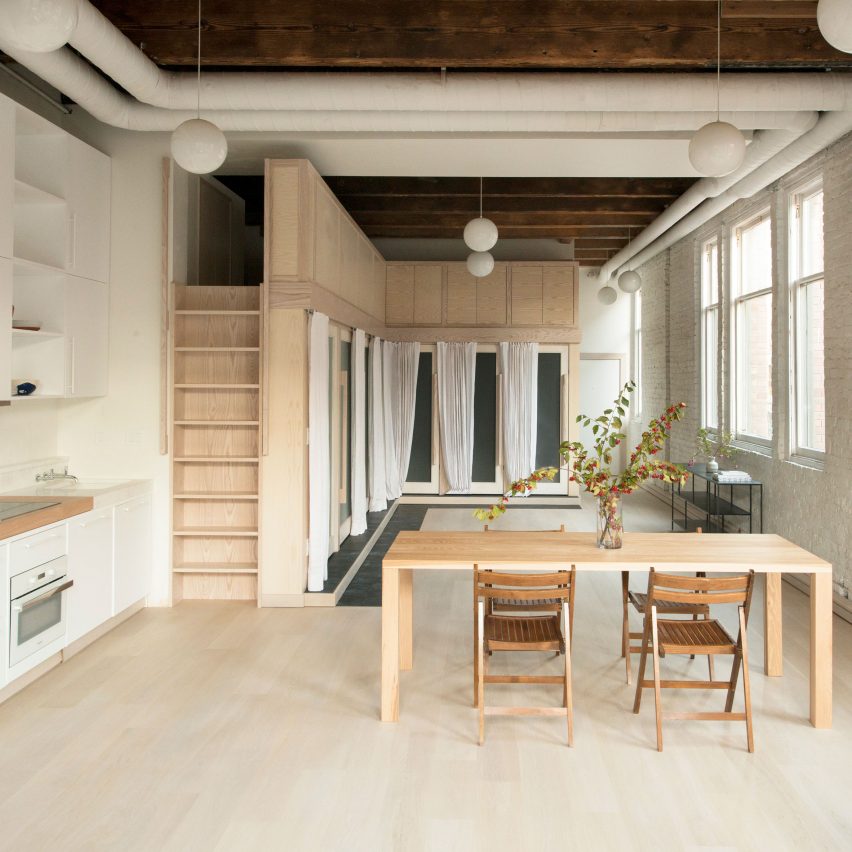 A blackened-wood sauna is among the tiny wooden volumes that wrap around the open-plan living area of this apartment in Seattle, which was renovated by US studio Le Whit.

The overhauled 850-square-foot (79-square-foot), single-storey condominium is the second home of a technology entrepreneur, who grew up in Seattle but is now is primarily based in New York City. 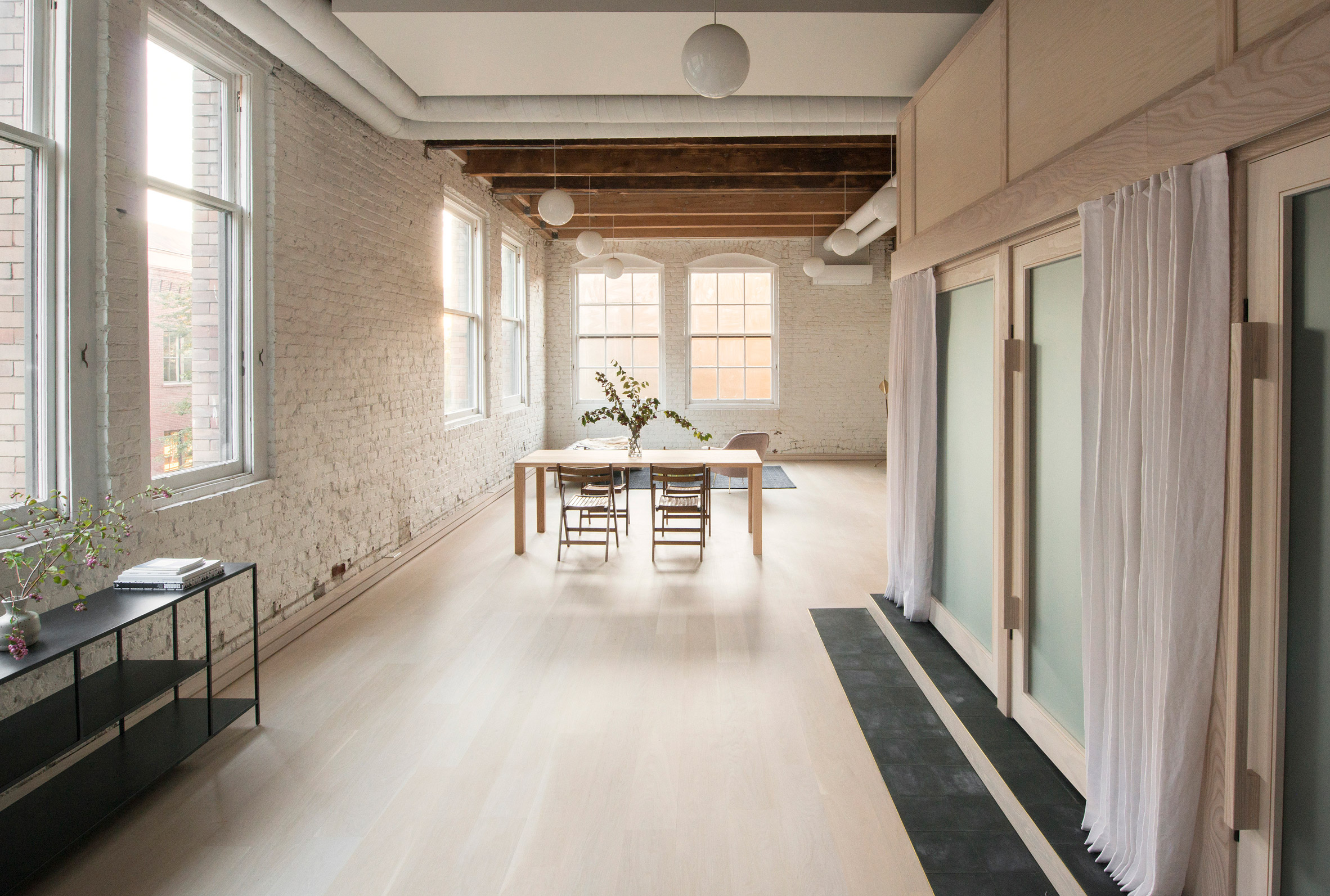 Located in the Pioneer Square neighbourhood, the renovated loft is intended to be flexible for both working and spending time with his family.

Le Whit, which has studios in New York City and Seattle, gutted the space to create an open-plan space to suit this arrangement. 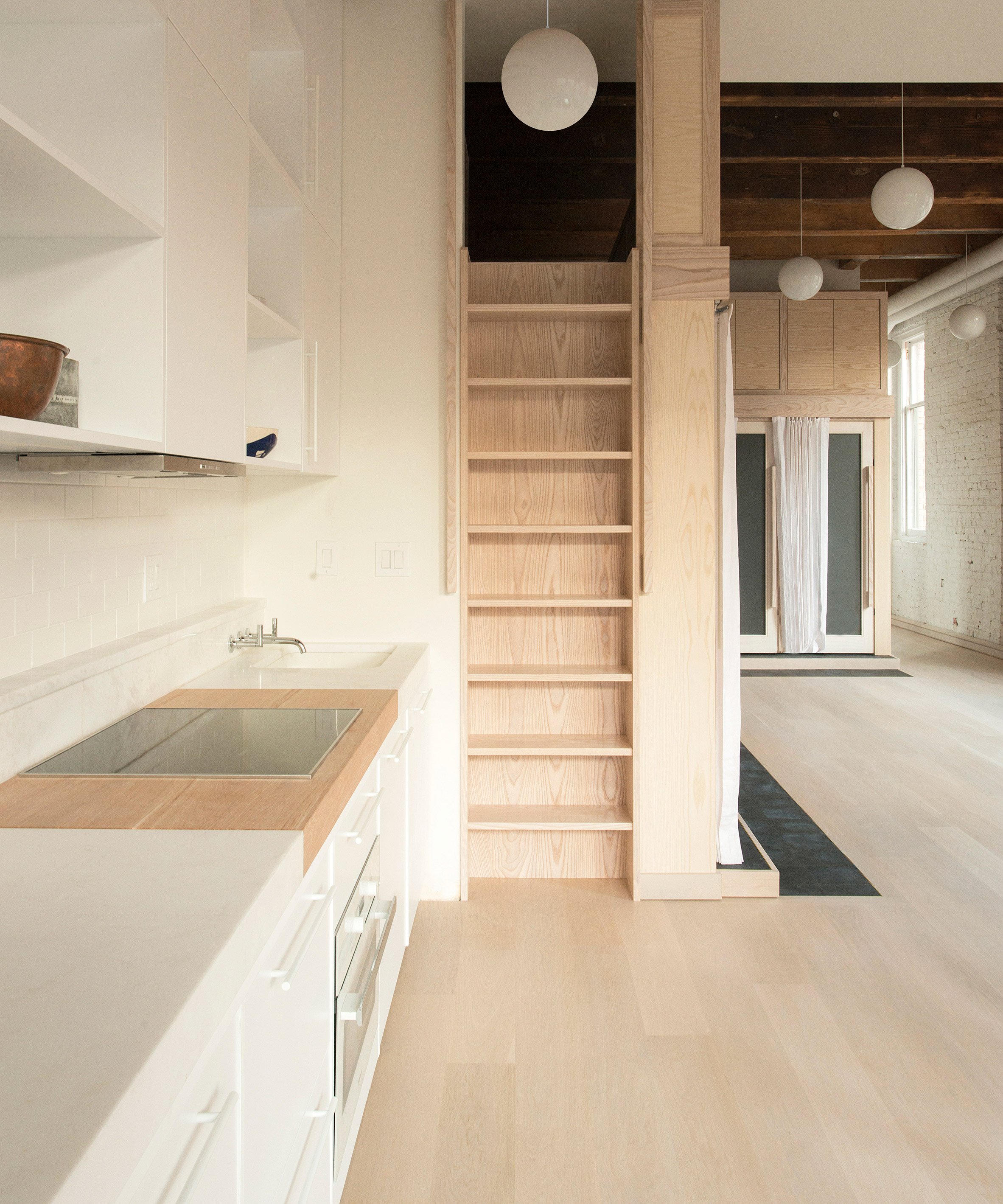 Stripped back to original features, the interiors include exposed existing brickwork walls – whitewashed on one side of the space – along with dark wooden ceiling beams and panels, and white-painted ductwork. 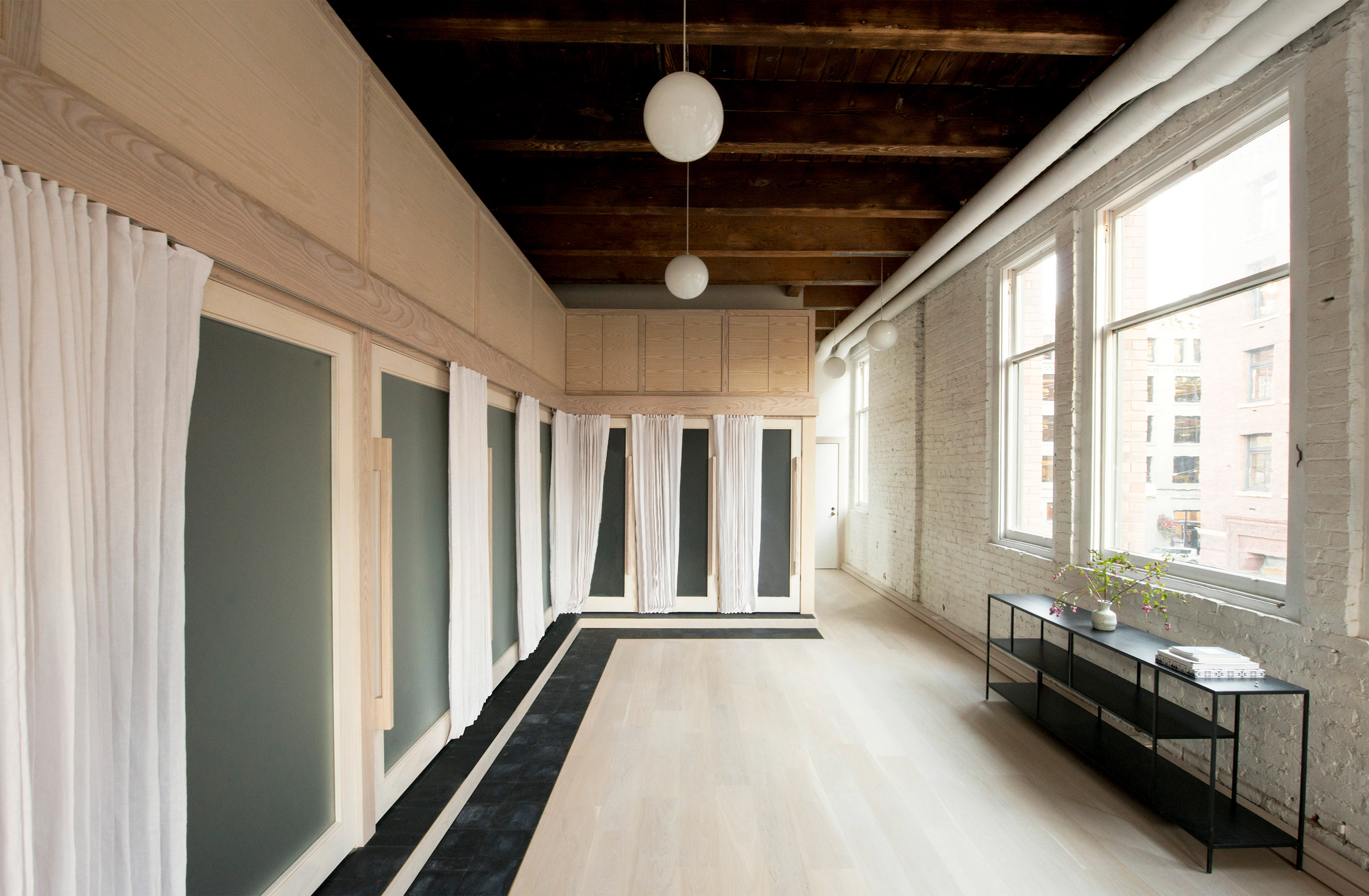 “There was very little that was maintained besides the demising walls of the condo,” Le Whit co-founder Corey Kingston told Dezeen. “We demolished the existing interiors, removed the sheet rock ceiling, and sand blasted the beams in order to start from the most historically original.”

The studio then created a custom-built, L-shaped volume made of white wood that fits neatly into one the corner of the space. It houses a series of smaller boxes that make up the bathroom facilities, include a washroom, a shower, a toilet and a sauna. A mezzanine level above, accessed by a built in ladder, is where the bedroom is located. 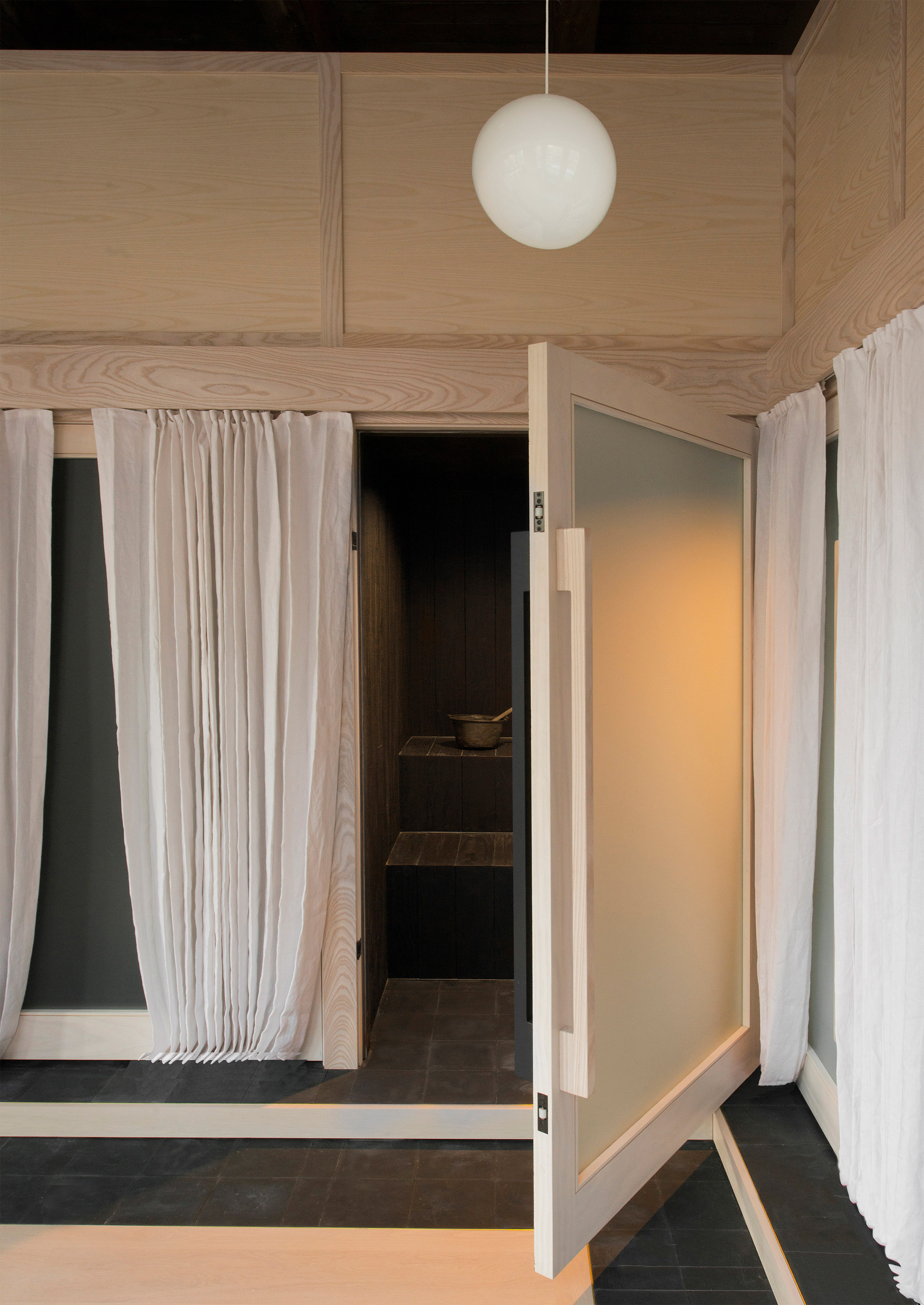 Frosted glass doors provide access to each of the units, which is lined inside with wood charred using the traditional Japanese technique known as Shou Sugi Ban – making the material resistant to rot and fire. The floors are covered in dark cement tiles, to contrast the pale tones of the rest of the home. 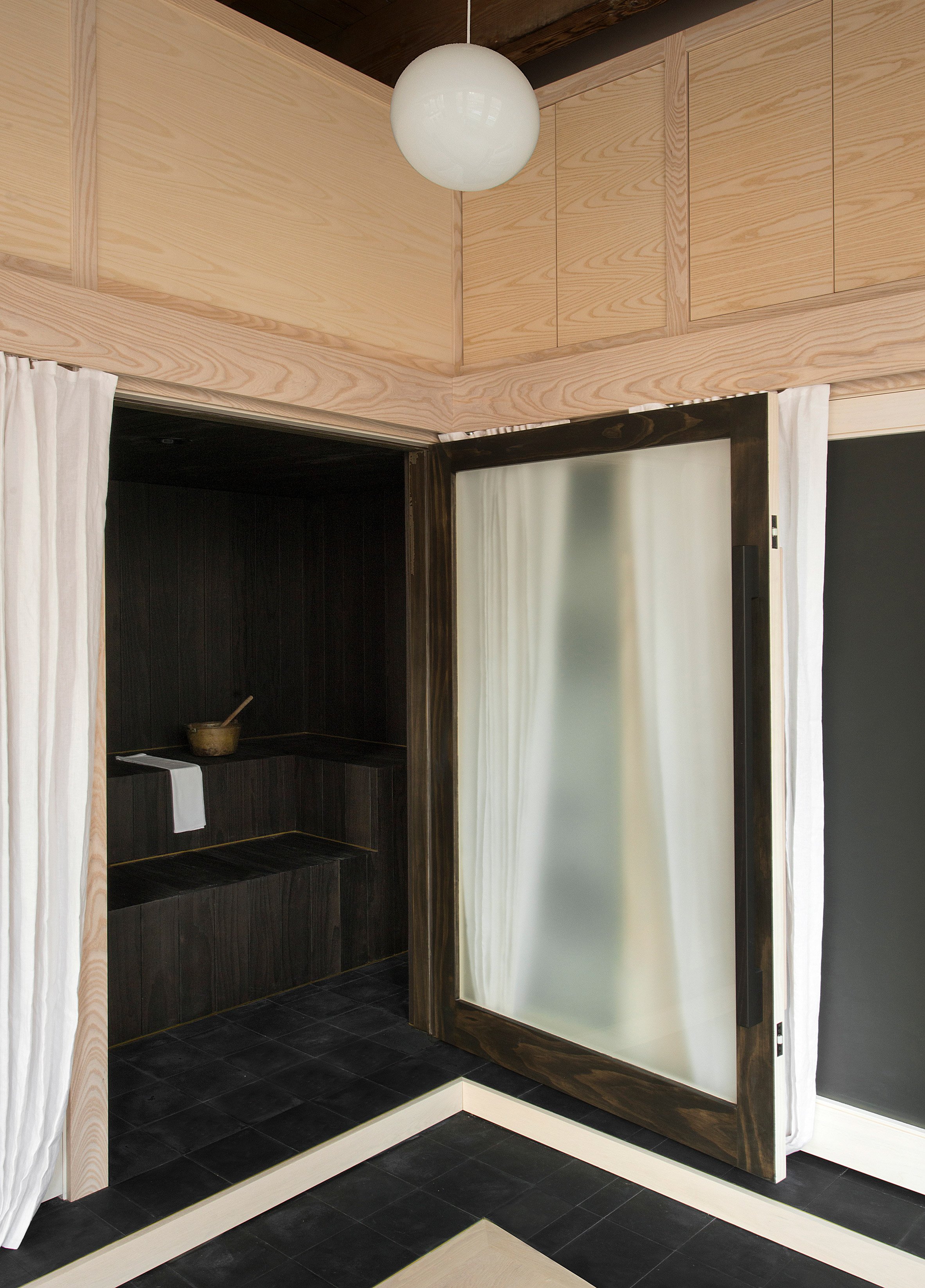 “To celebrate the open loft, the small rooms act as a contrast,” Kingston said. “To celebrate the lightness of the outer palette, the bathrooms are completely clad in charred Shou Sugi Ban, with a floor of black cement tiles.”

Other black finishes include the paperstone vanities, with stained-wood door handles. Pale curtains cover the glass doors are provided for added privacy, “but also for the auditory sound of moving fabric across a track”. 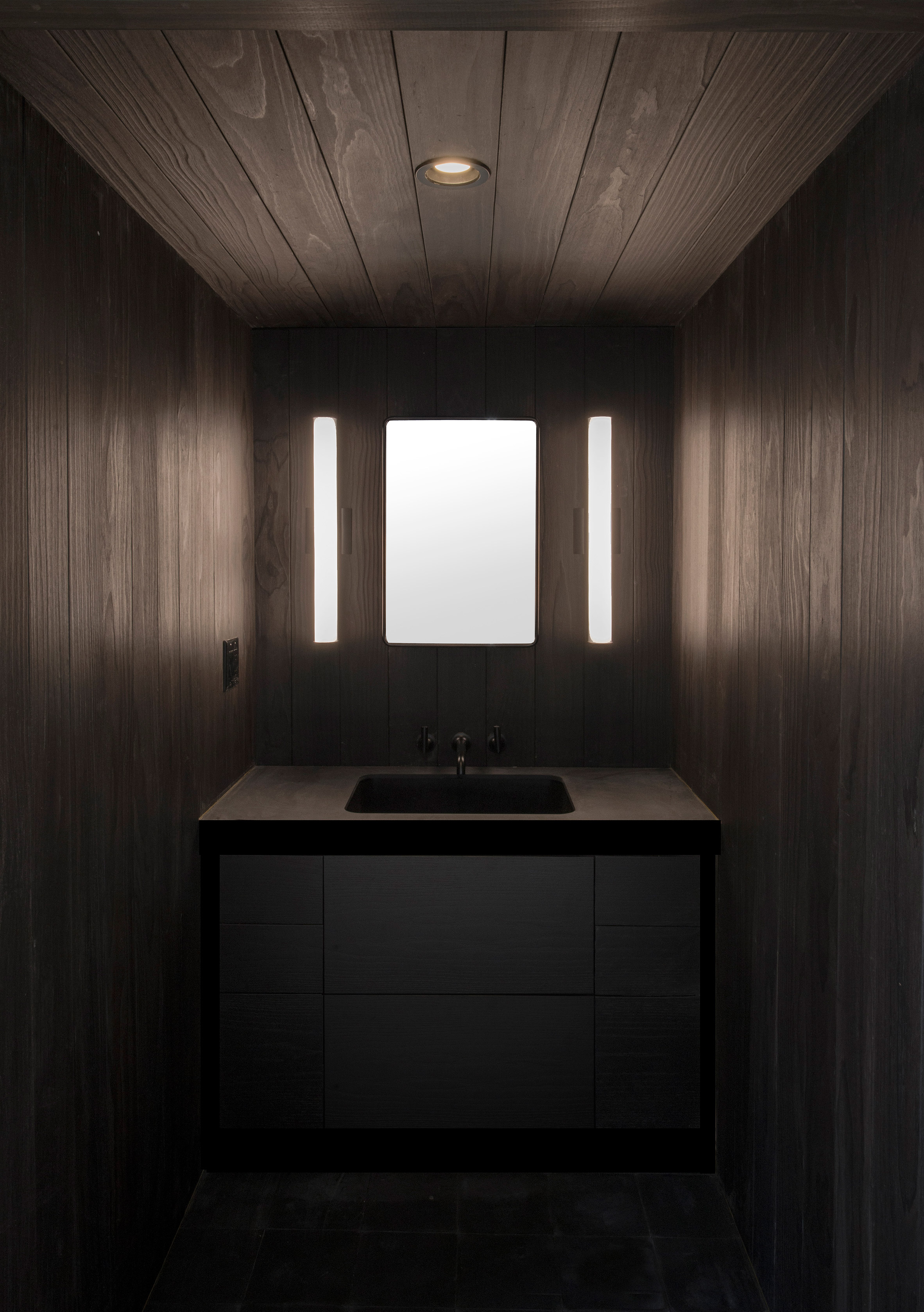 In order to exaggerate the entry into each of these spaces, Le Whit added a step and huge oak door handles to the front of each.

“The aim of the design is to contrast between the open space and the interior of the bathroom stack,” she continued. “This was achieved by layering light and dark materials of different tactile qualities.” 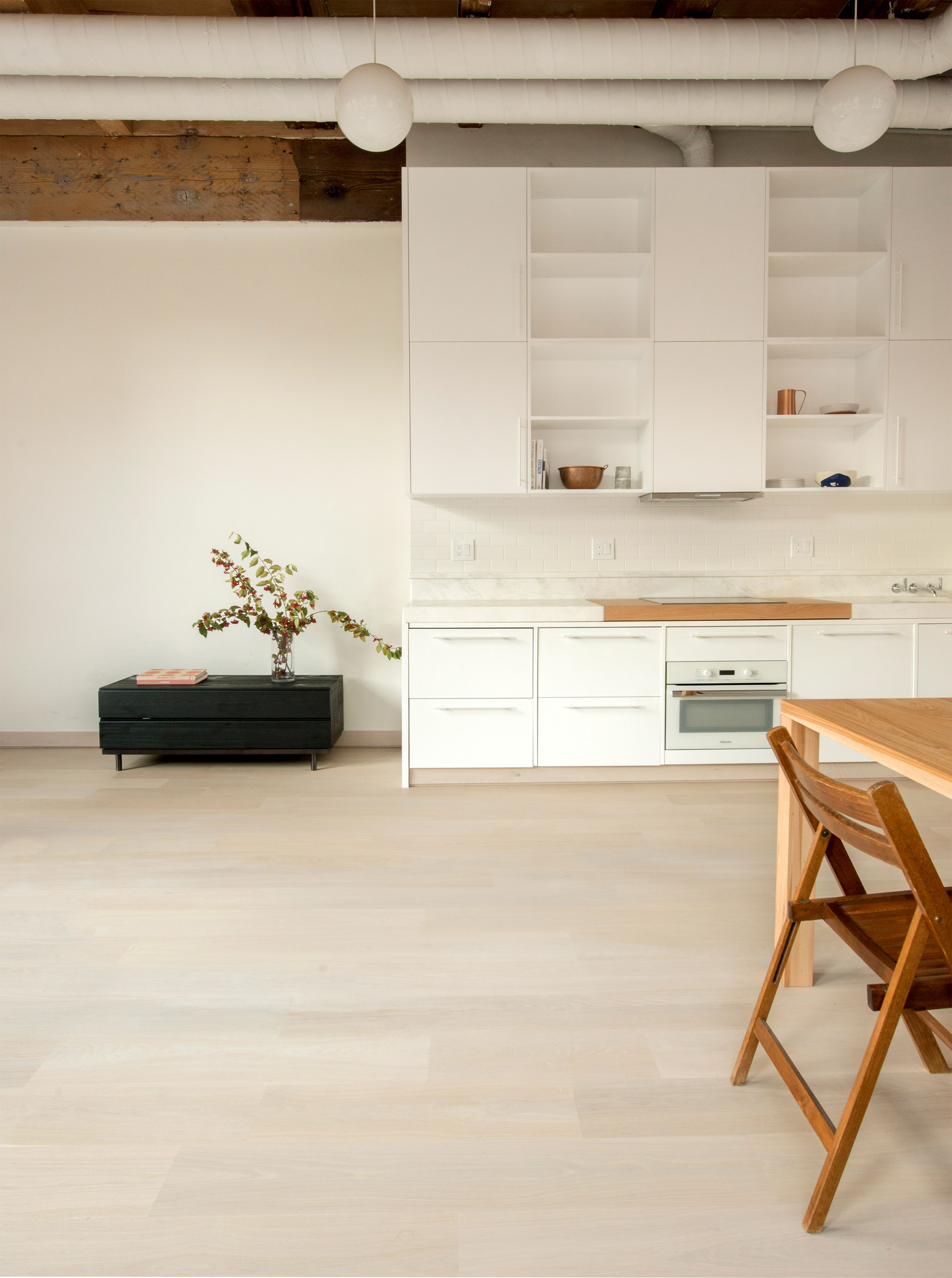 For the open-plan living area, the studio used paler and softer materials. White-painted doors run along the front of the kitchen cabinets, matching the white gypsum walls and subway tiles.

A portion of the counter features a reflective Rino Honed marble countertop with an inset hickory cutting board, which matches the wood for the custom dining table. 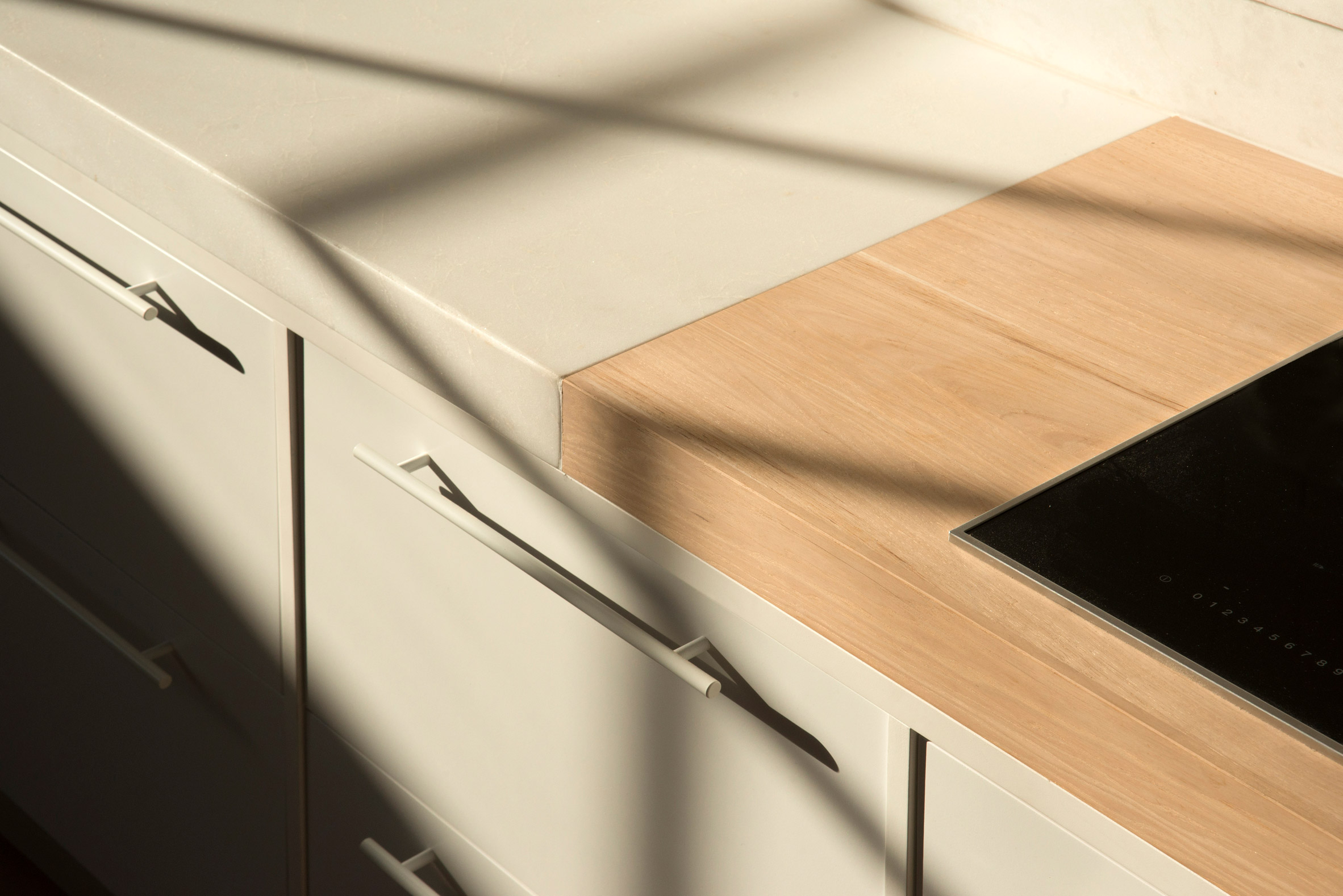 The lounge is placed in the corner, with low-level seating arranged to allow plenty of natural light to come in from the arched windows. Additional artificial light is provided by globe-shaped white pendant lights, which are dotted throughout the apartment.

Also in Seattle, SHED designed a sensitive renovation to mid-century modern home, while Wittman Estes added a studio building and a Chinese-inspired courtyard to an existing residence.

Photography is by Charlie Schuck.