Designers Yves Behar and Amir Mortazavi have completed a shared workspace in San Francisco’s downtown area, where members can take advantage of an outdoor terrace.

Canopy Jackson Square joins the venture’s first outpost in Pacific Heights, which opened fall 2016. Both were created as a collaboration between Behar – founder of design studio Fuseproject – and Mortazavi, who is behind development company M-Projects. 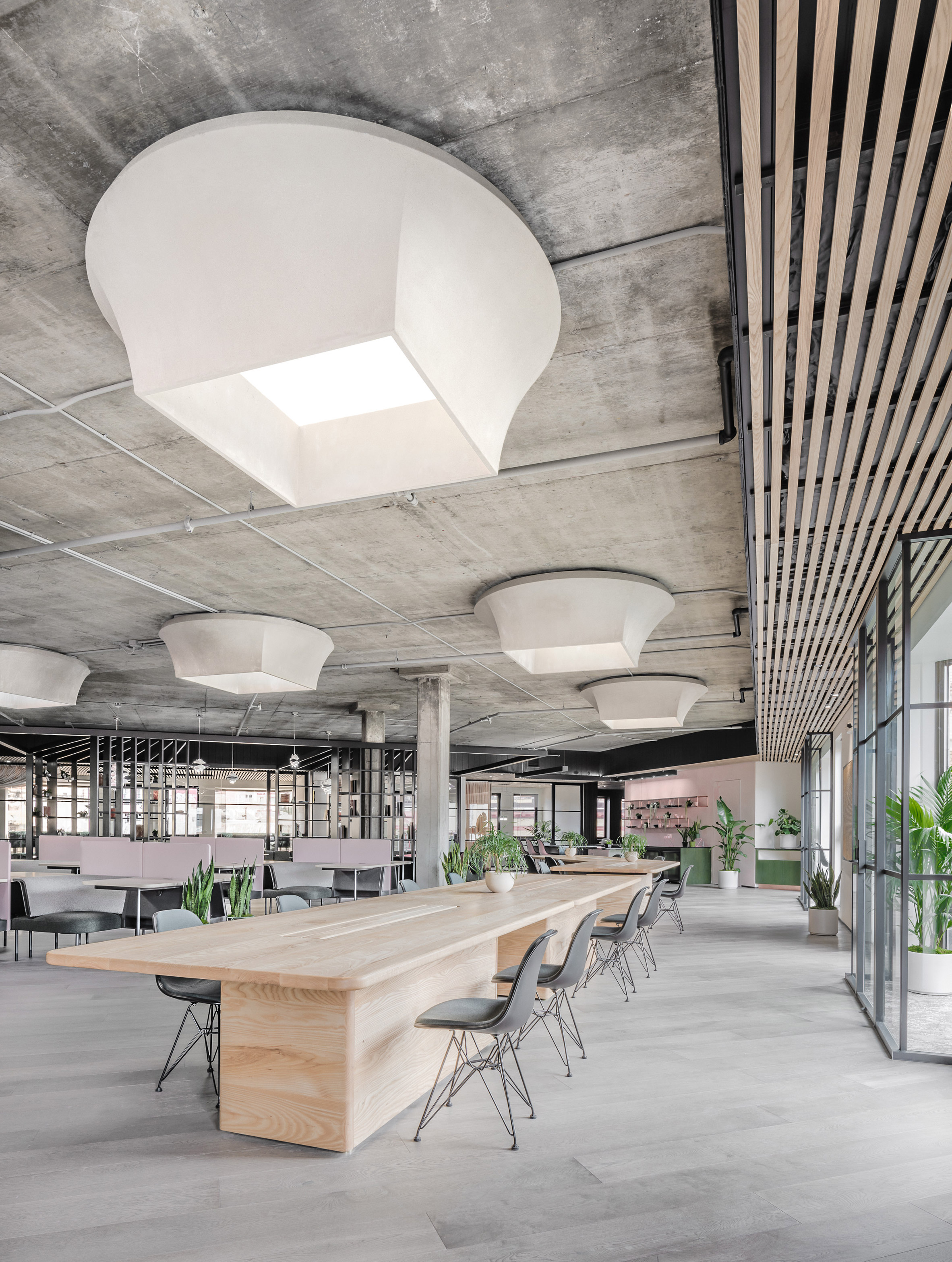 The pair worked together on the design of the space, which spans 13,000 square feet (1,200 square metres) across the top floor of a brick building and includes areas for various working styles.

Glass enclosures form private offices on one side, while an open-plan area with desks and a cafe are located on the other. 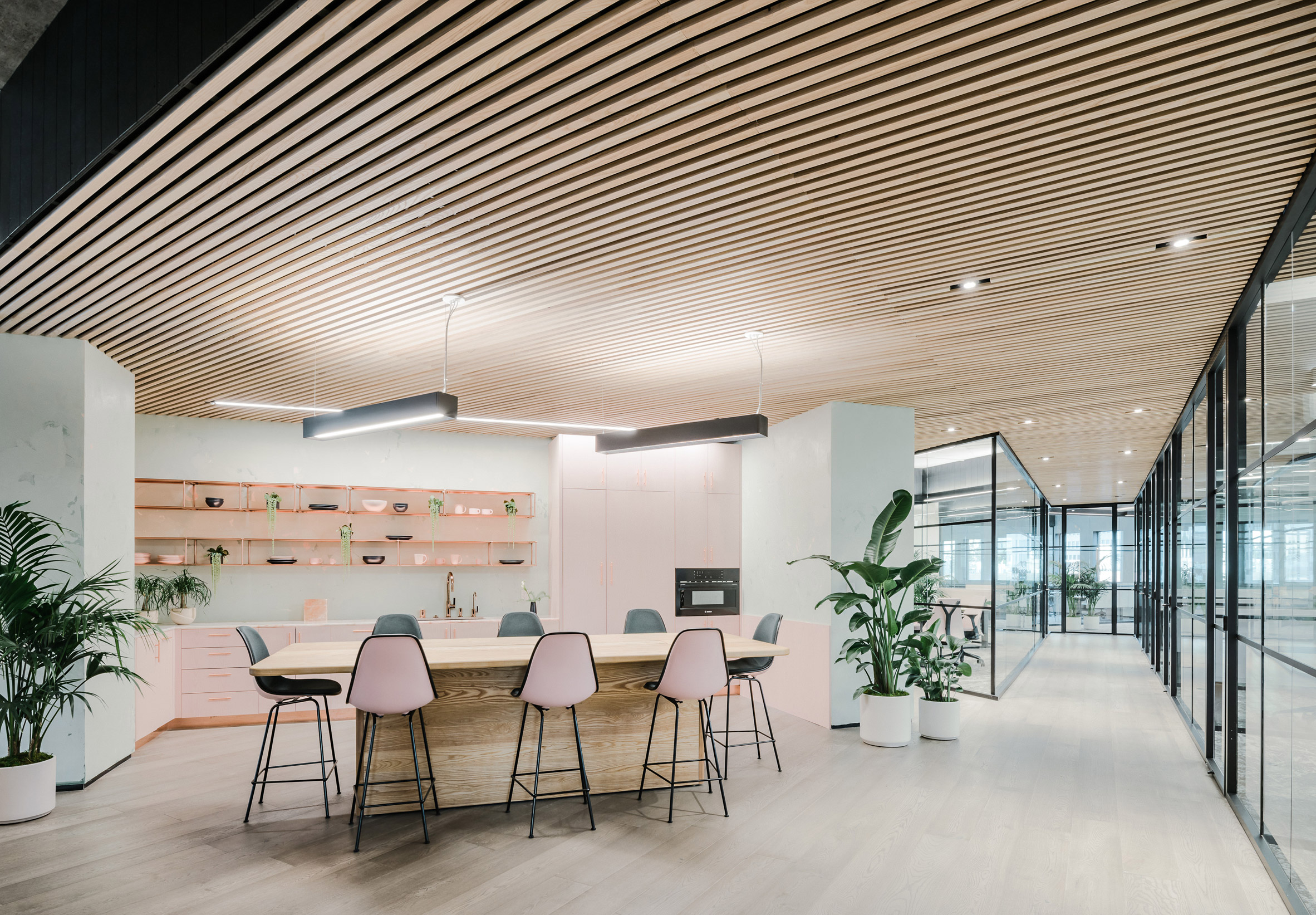 In the centre is a lounge, delineated by a gridded structure that forms wall partitions and wraps around the structural columns.

It creates shelves for storing and displaying items, which are connected by horizontal slats that span between the units below the exposed concrete ceiling. 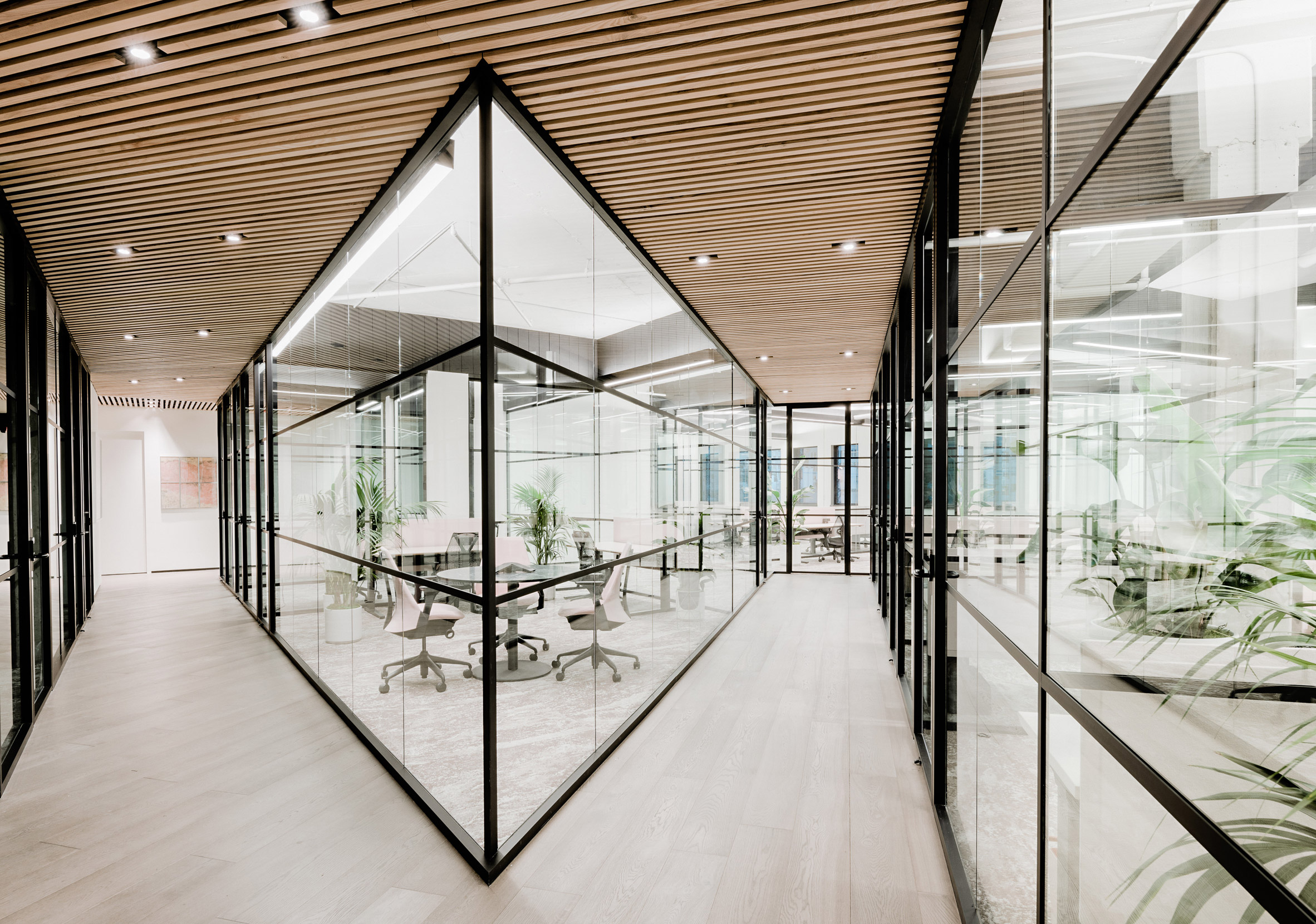 “The tree-like design serves as both a visual privacy screen to the conference room and work areas, as well as a containment of the lounge area,” said a project description from Canopy.

Snaking around the base of the partitions, modular sofa sections are upholstered in a mid-green fabric, and scattered with pale pink and beige cushions. Small metal tables and lounge chairs are coloured to match the pillows.

The same hues carry through the workspace and other areas – used for desk dividers, kitchen cabinets and office furniture.

“Canopy Jackson Square’s colour palette is a nod to its location amid the captivating neighbourhoods of North Beach, Jackson Square, the Financial District and Chinatown,” said the statement. “A sense of serenity and feminine qualities contrast and harmonise with the architectural textured black surfaces and exposed concrete.” 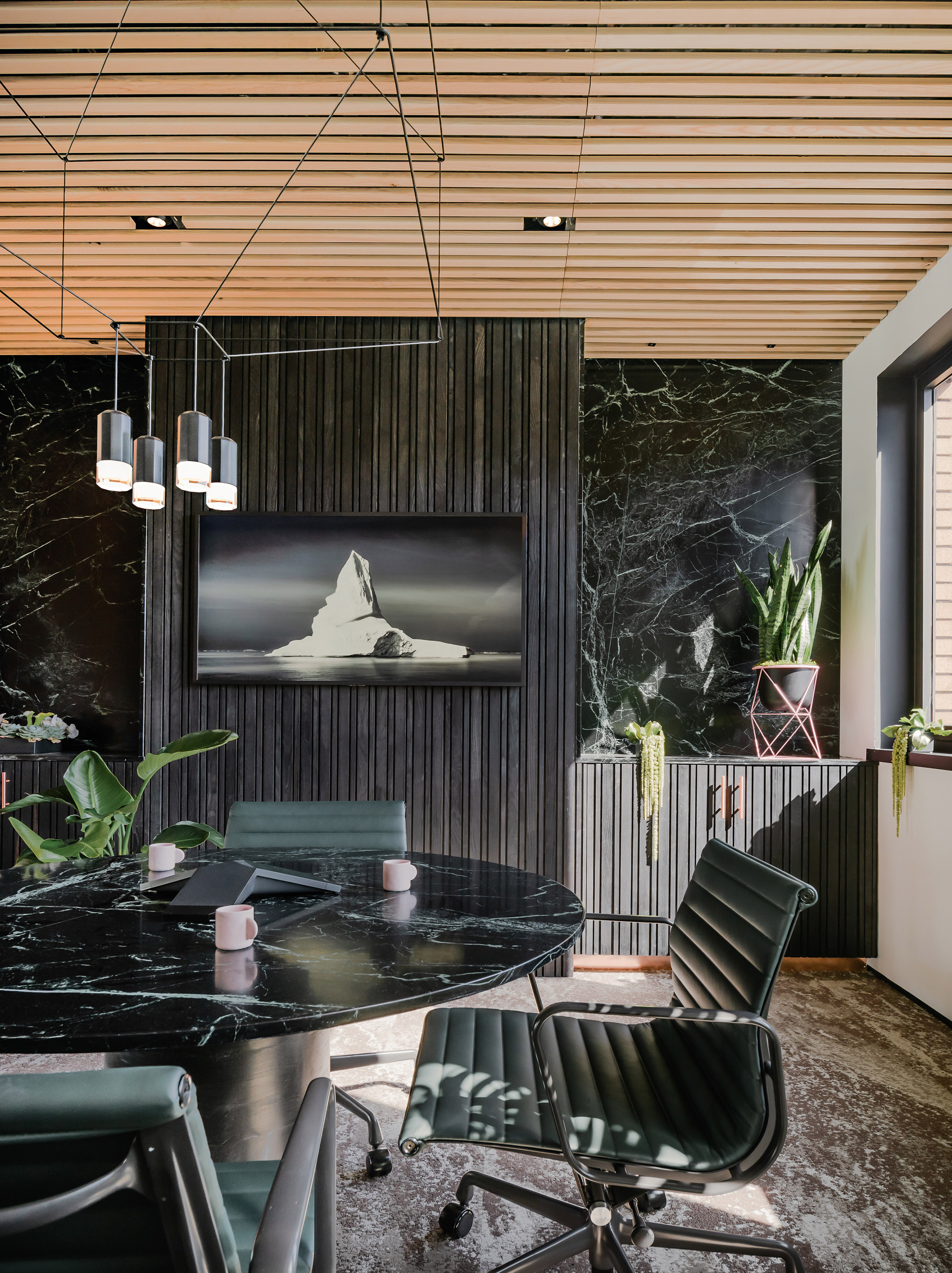 Stained timber is also used in the reception to line the ceiling, walls and counter, creating a dark space to contrast with the much brighter work area beyond. 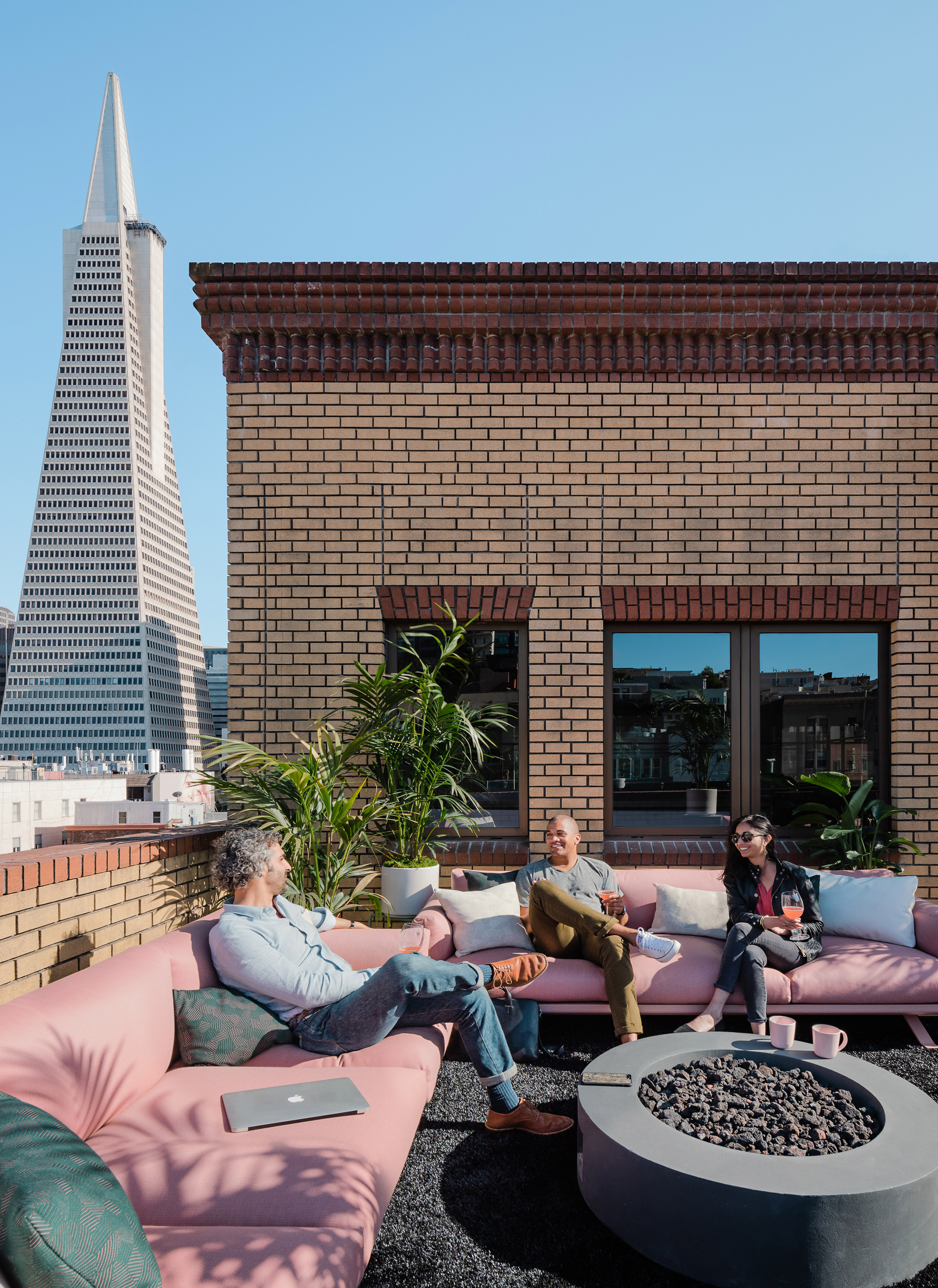 Pale wooden slats cover portions of the ceiling in common areas to aid acoustics, while custom foam light fixtures in the open workspace are also installed to help with sound control.

A selling point for the space is an outdoor terrace, which boasts impressive views of downtown San Francisco’s skyscrapers, like the iconic Transamerica Pyramid. 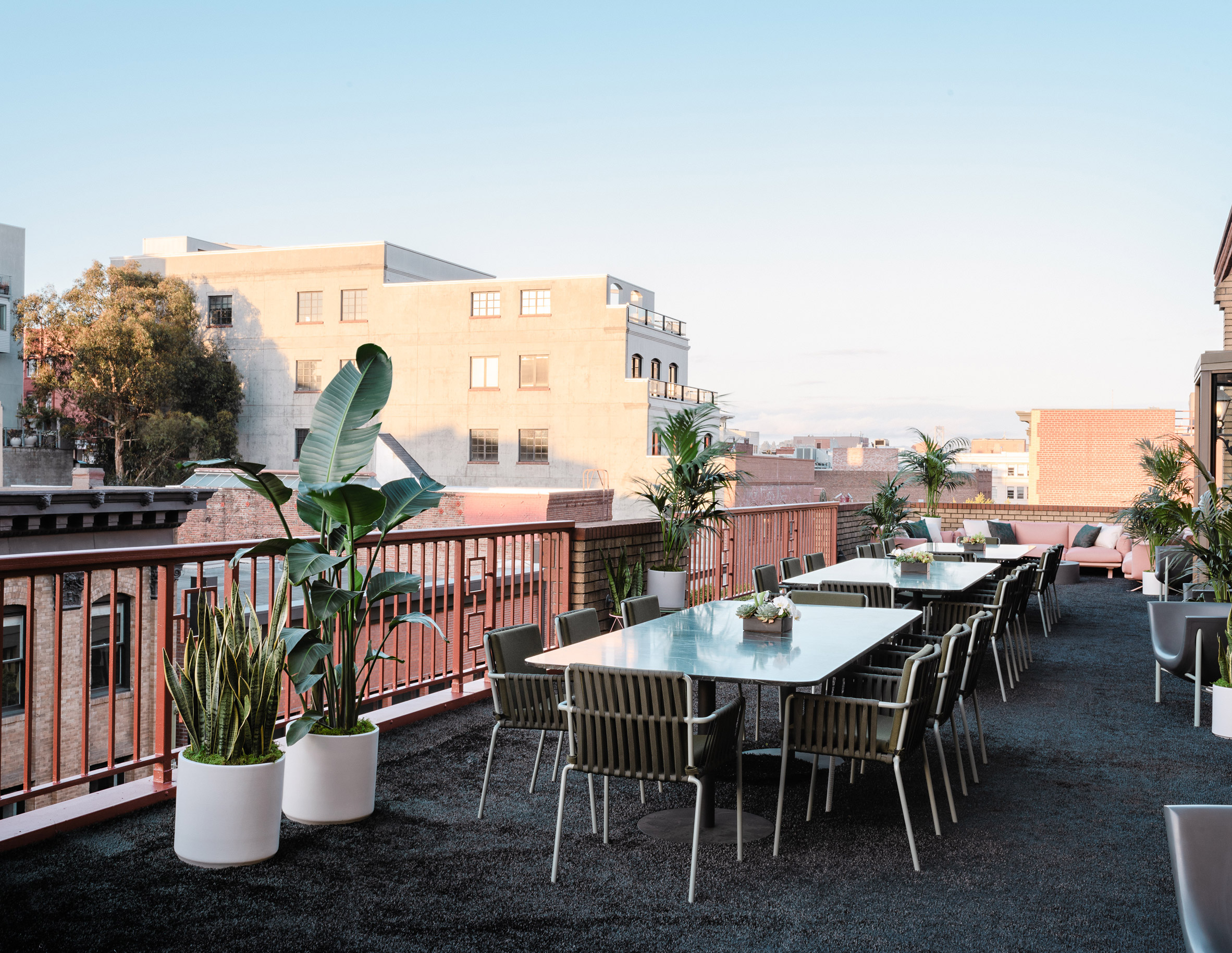 The area can be partially covered and heated, allowing Canopy members to work outside on large sofas or at communal tables year-round.

More and more co-working spaces are opening worldwide, reflecting a change in work habits as lifestyles becoming increasingly digital and nomadic. Recent examples can be found in Copenhagen, London, Toronto and Paris.