Tehran studio Zav Architects designed this boxy house in northern Iran as a series of enclosed living units surrounded by open-air platforms and social spaces with views across the rural landscape. 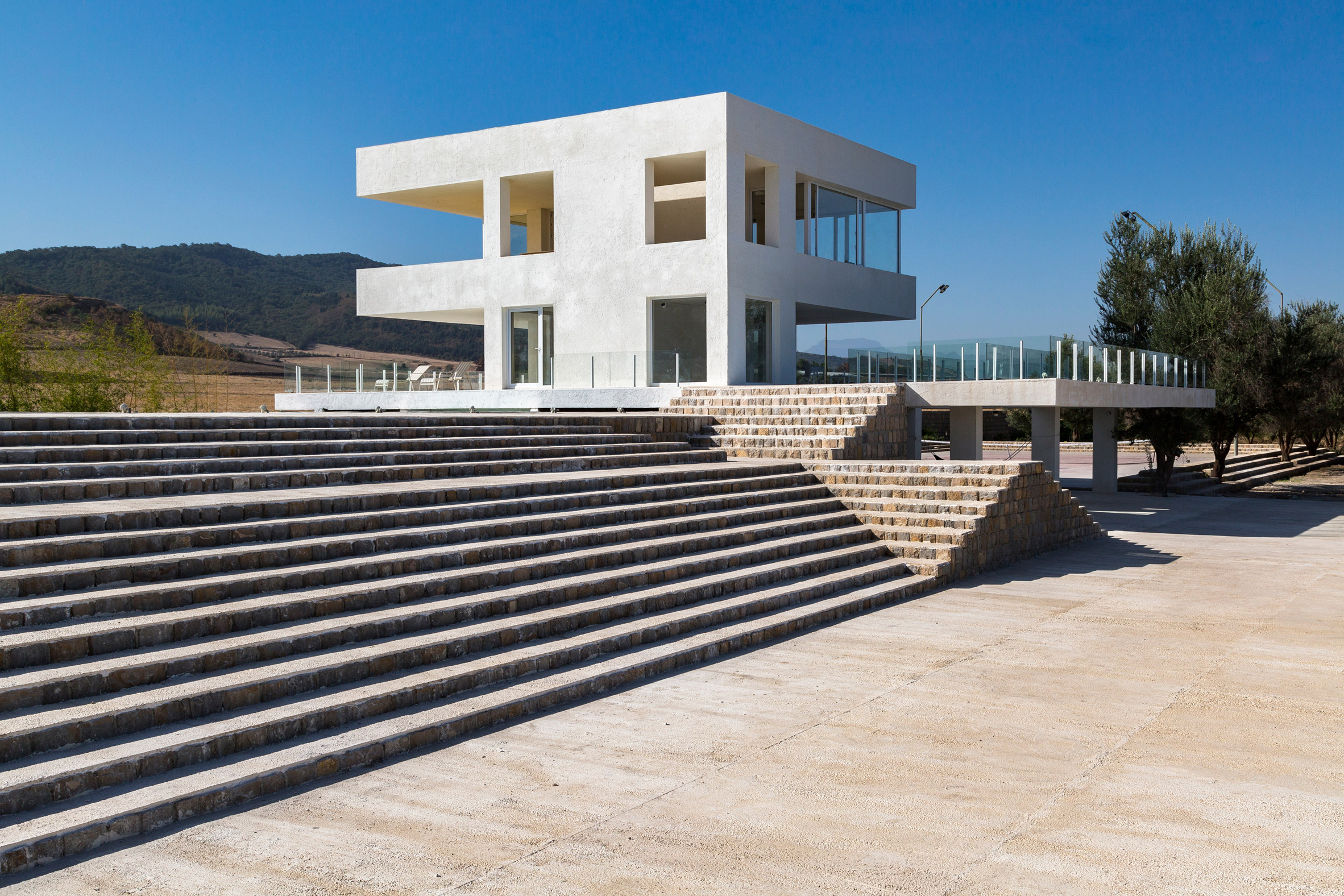 The property is located in the hills outside of the city of Minudasht in Iran’s Golestan Province, and occupies a built area of 298 square metres on a site of around half an acre. 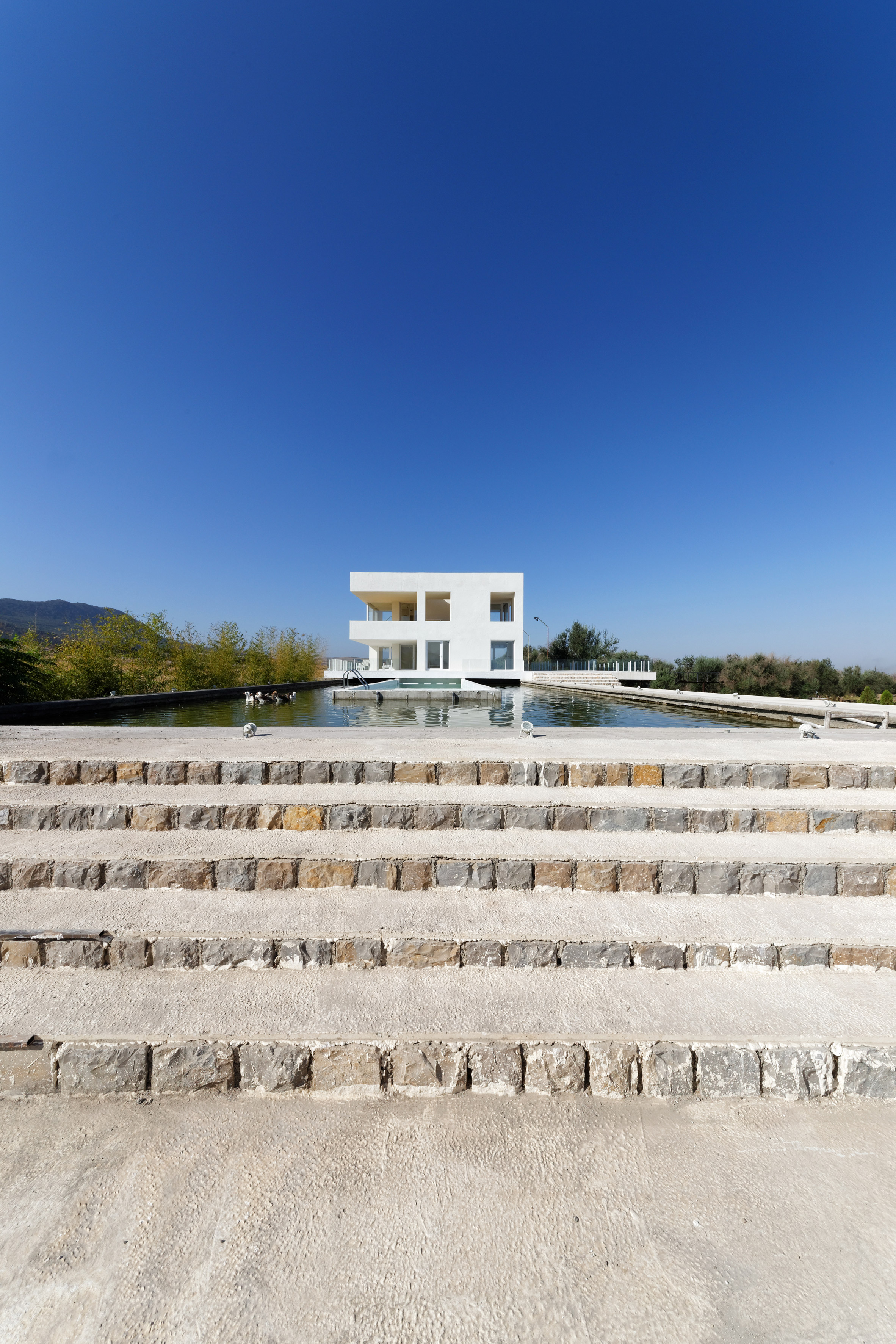 Zav Architects was tasked with developing a proposal in response to the site’s natural topography and to enhance, rather than detract from, its rural context. 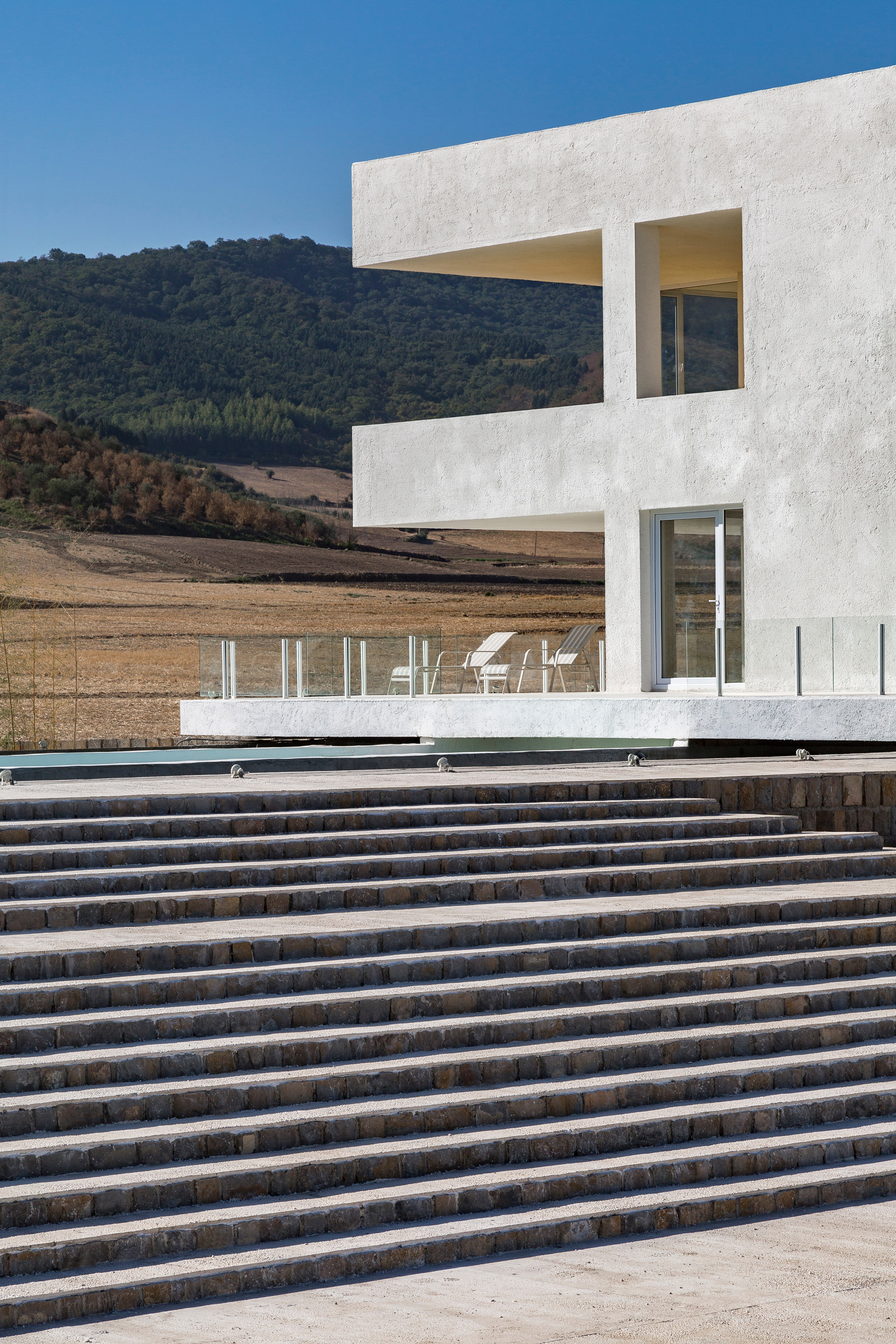 The project’s main focus was to make the most of the expansive views. This prompted the studio to adopt a novel approach to laying out the building’s plan, and led to it naming the project Chesm Cheran, which means belvedere. 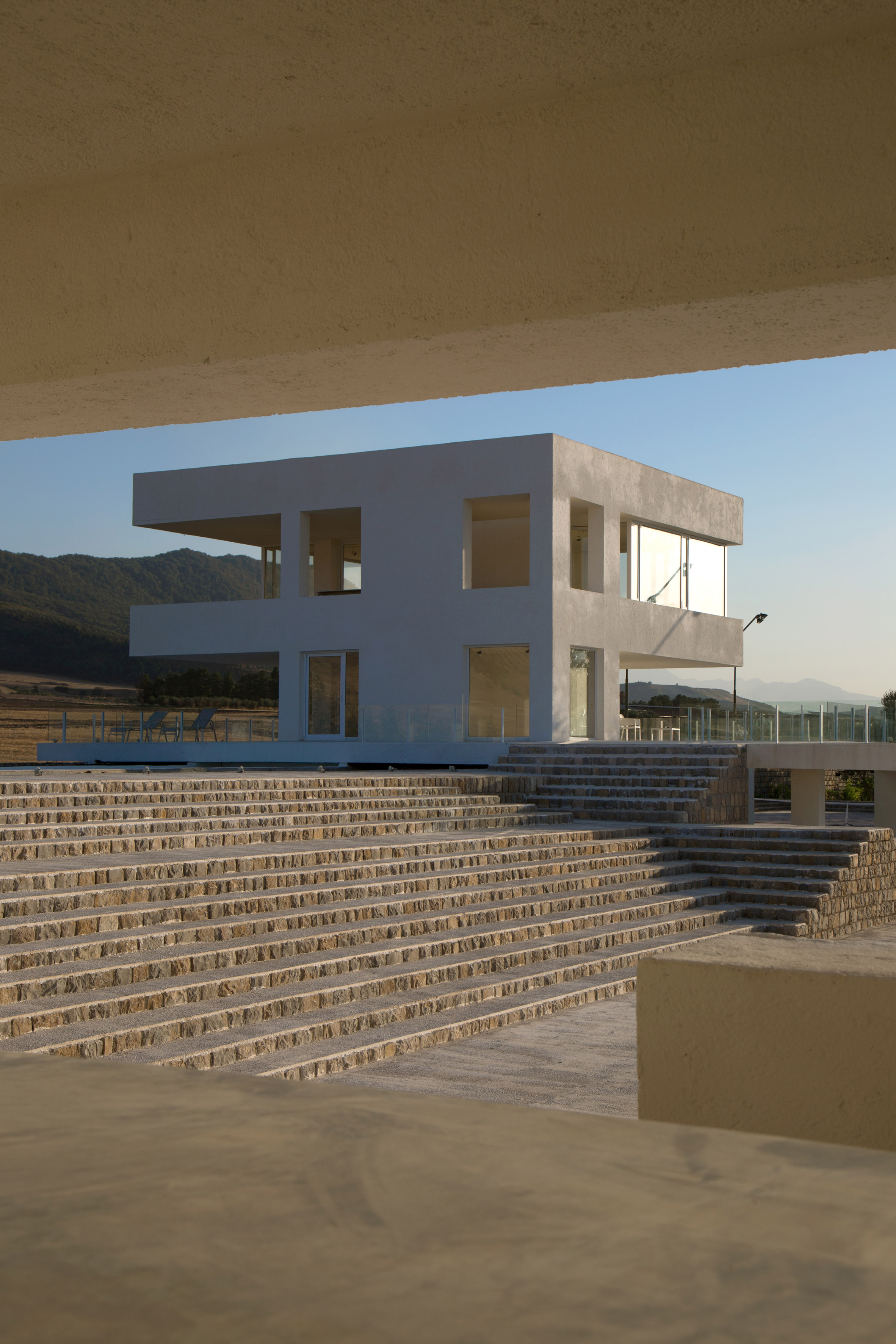 “To secure maximum connection with nature, the conventional circulation and spatial diagram for rural and suburban constructions is challenged,” said Zav Architects.

“Circulation and social spaces of the house are combined and misplaced to be situated around the habitation units as an elevated open space called the Platform or Joy Lounge, which was the result of our endeavour to impose the minimum intervention on the farm land that appears as a duplicated and elevated piece of land.” 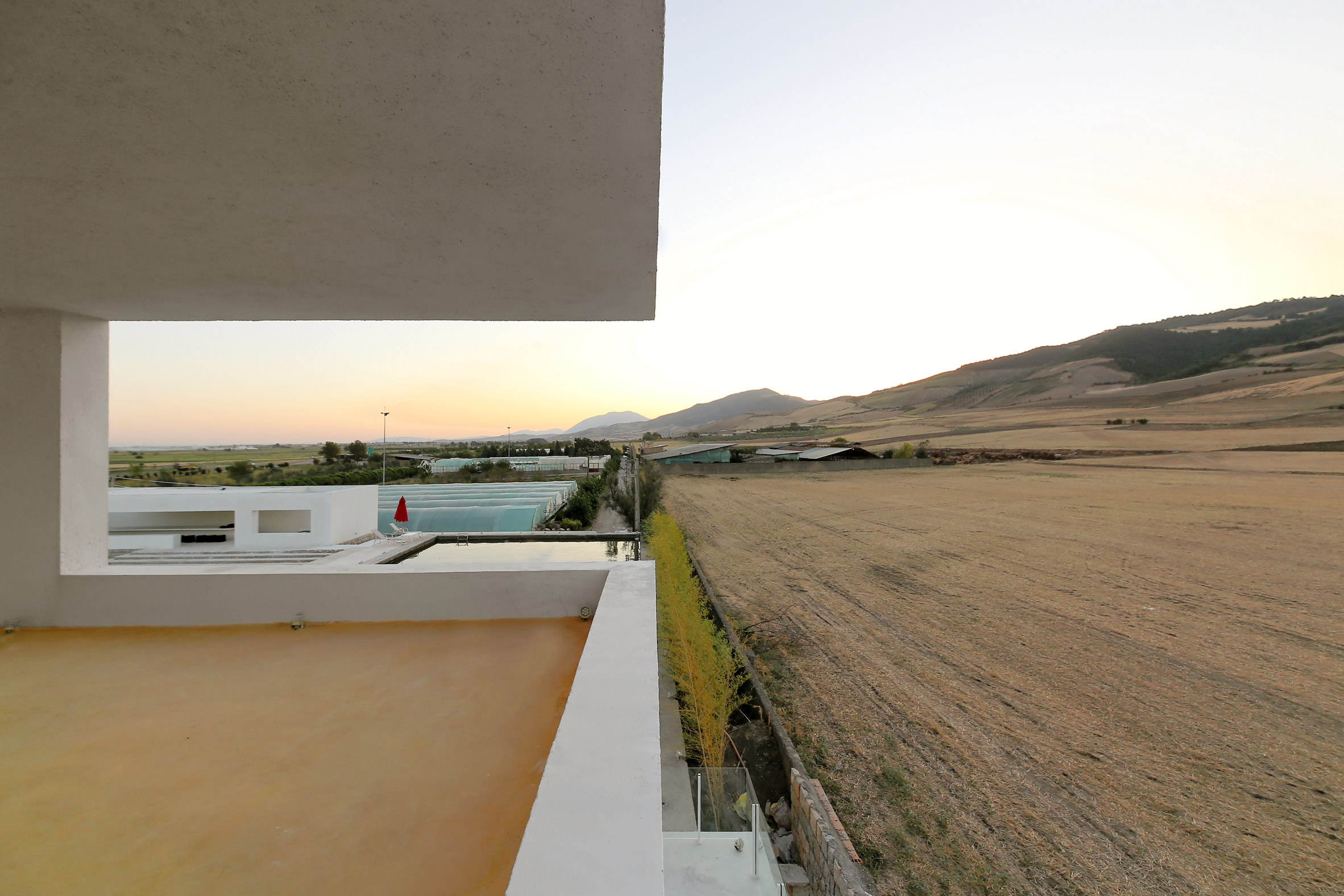 Gaps between the floor slabs on each level create panoramic vistas from a series of interior and covered exterior spaces, particularly on two opposite corners where the lack of a supporting structure provides uninterrupted views.

The ground floor contains a large gym with separate changing rooms for men and women, as well as a mechanical room servicing the house. 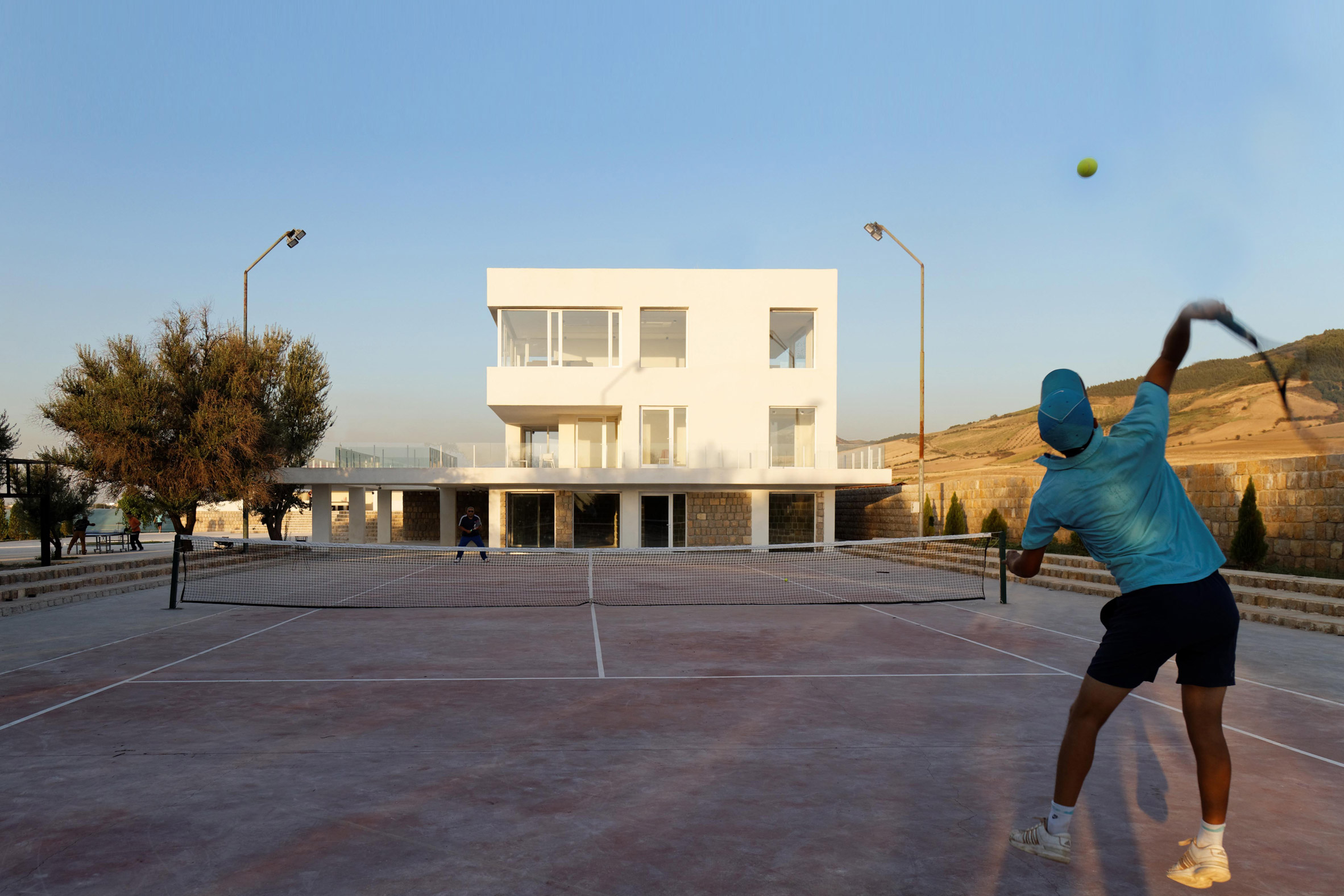 Robust stone walls on this level are interrupted by large windows that look out onto an adjacent tennis court and a terrace sheltered beneath the expansive slab of the floor above. 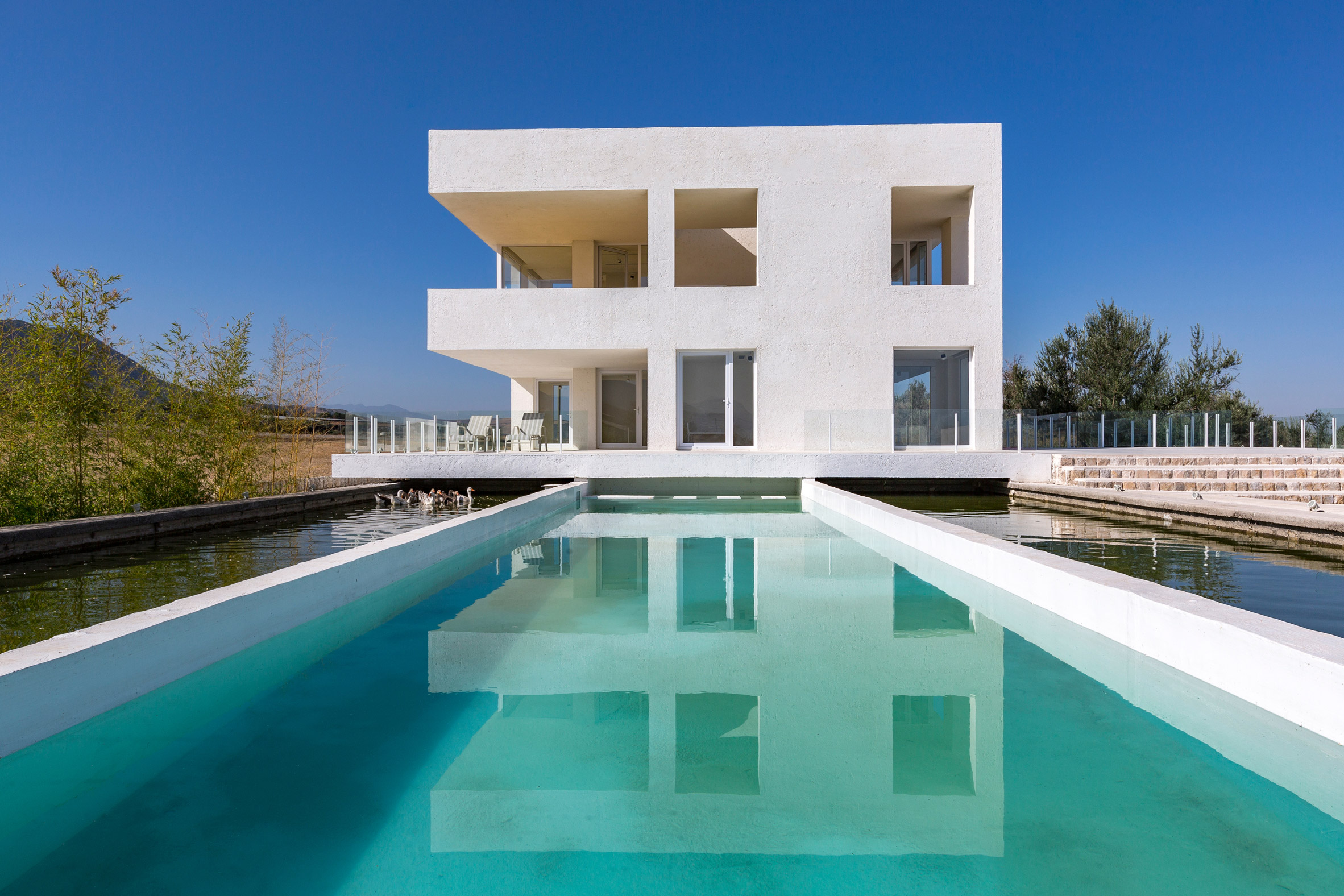 The massive concrete slab forms a platform that functions as a large outdoor deck. The perimeter of this outdoor space provides external circulation linked directly to the nearby swimming pool and open-air barbecue pavilion.

The platform is partly occupied by three bedrooms, which are staggered in plan so doorways in the side of each room open straight onto the deck. 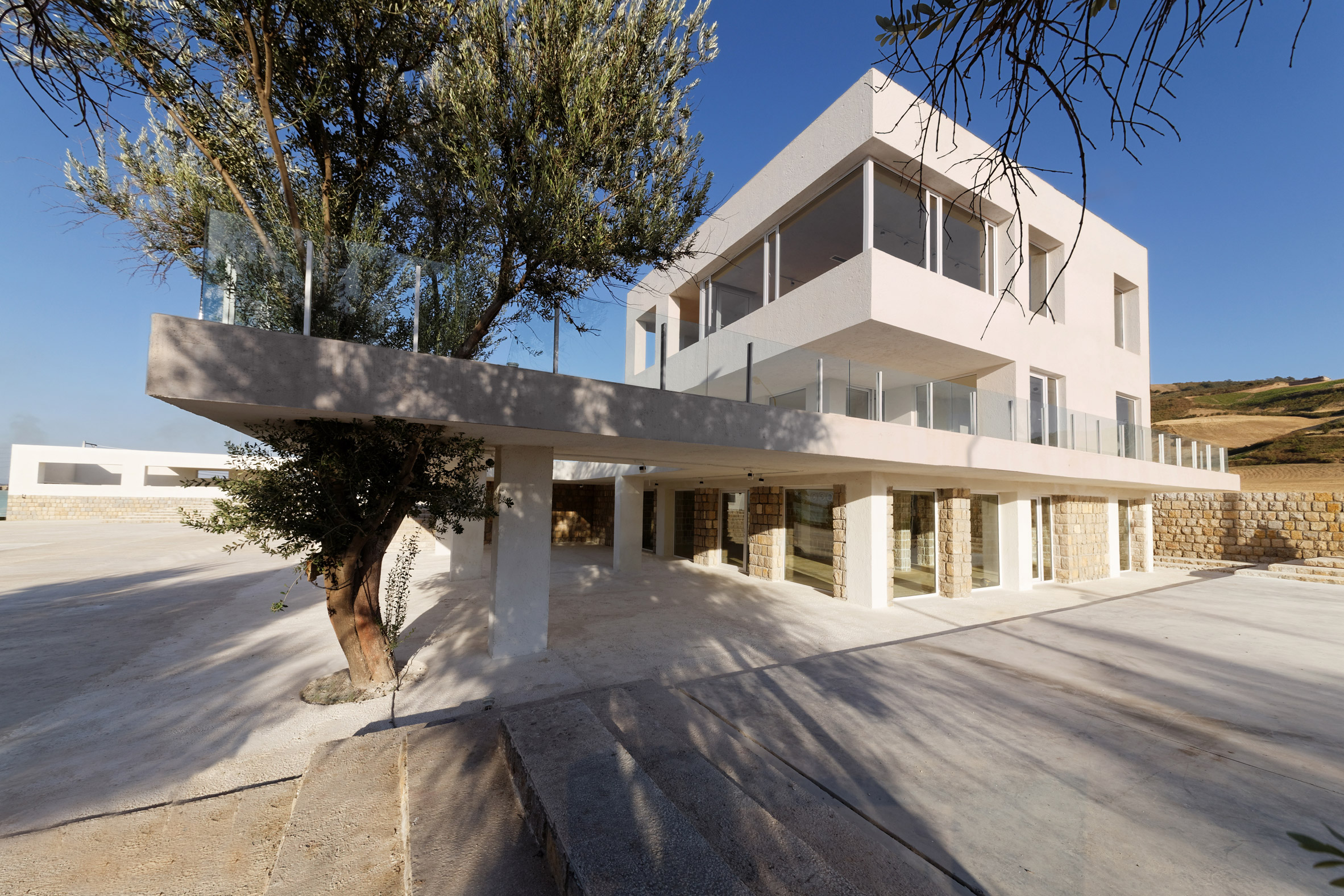 To one side of the main building, a void allows light and views down to the lower level, while a tree growing up through another hole in the surface provides dappled shade.

A staircase between the bedroom units ascends through a void to the top floor, where it connects with a sheltered deck occupying almost half of this level. 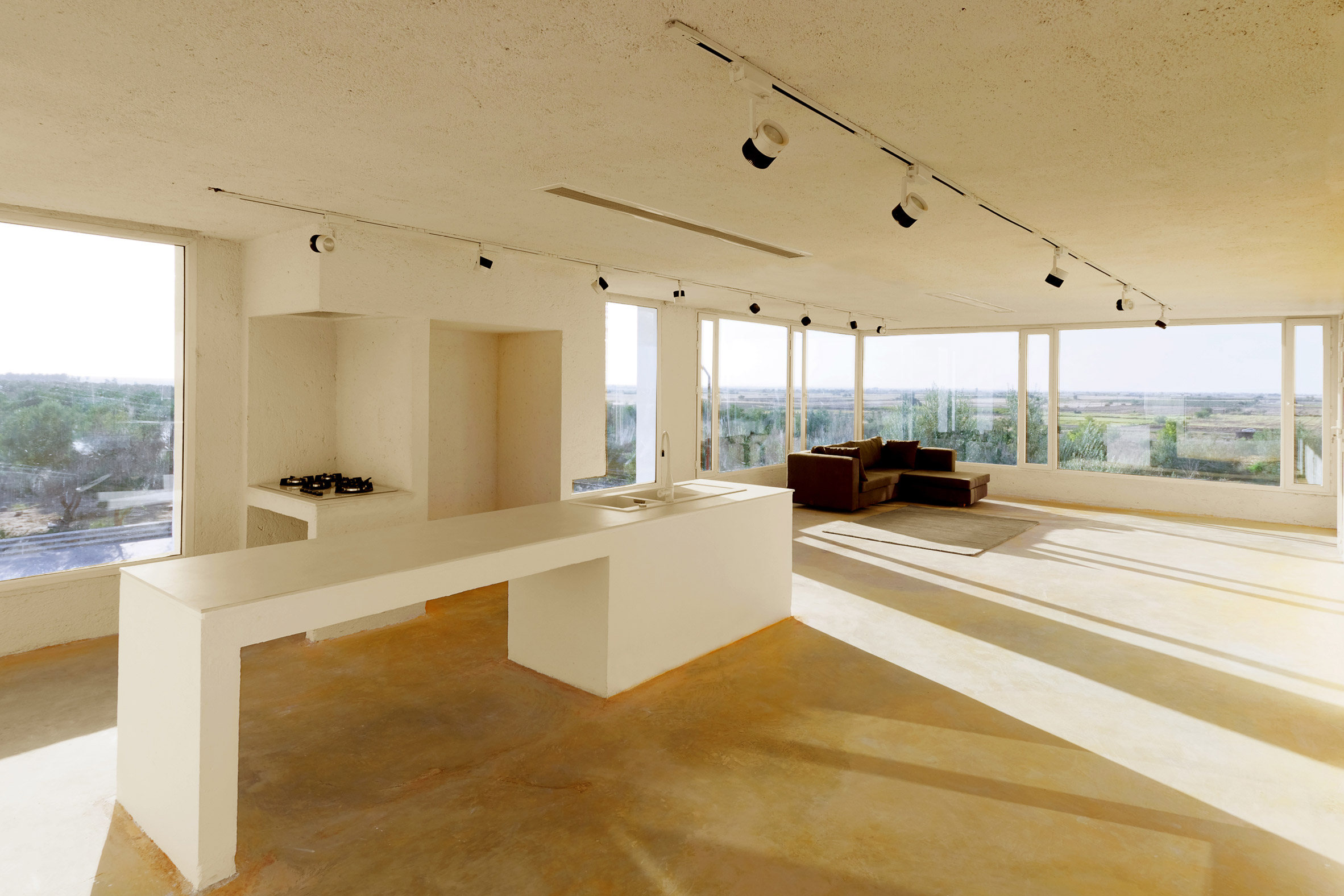 A door at the top of the stairs leads into an open-plan room accommodating living, dining and kitchen functions. 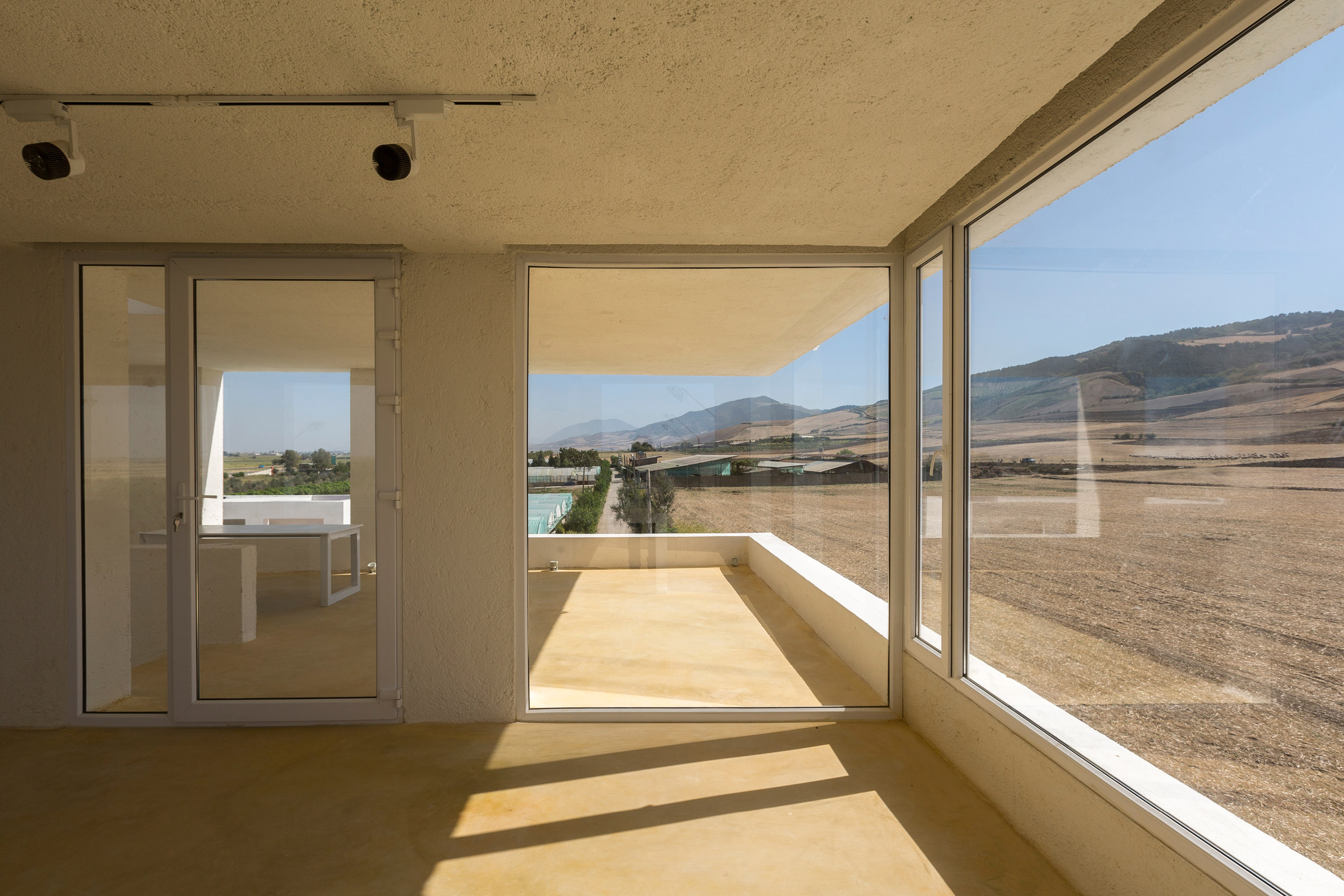 Large windows lining this space ensure it feels as connected with the surrounding landscape as the adjoining terrace. 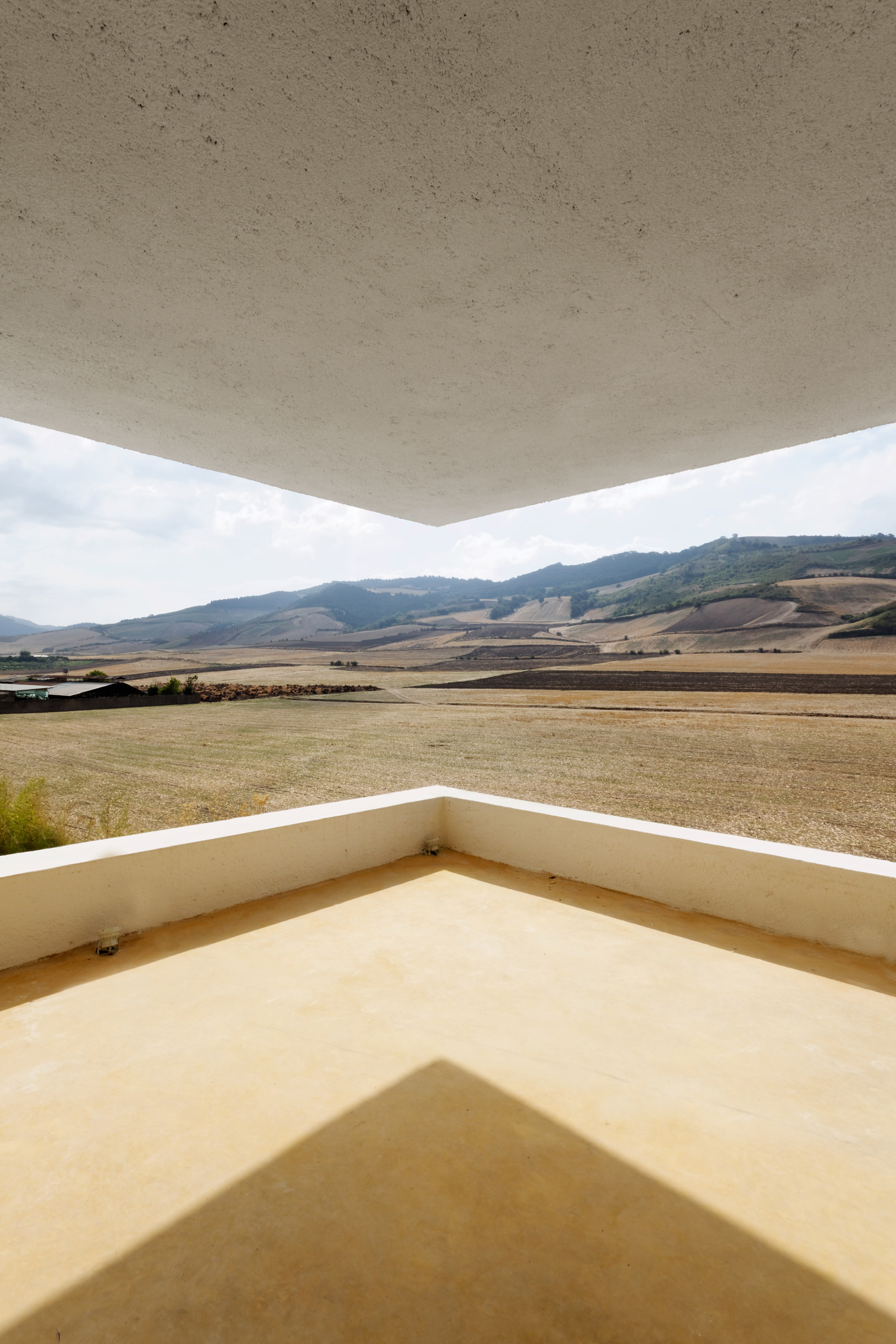 The project was constructed using stone that facilitated the reopening of a local mine and led to the employment of 30 local labourers and a master builder.

Stone steps that tumble down from the living platform towards a central plaza follow the original slope of the site. 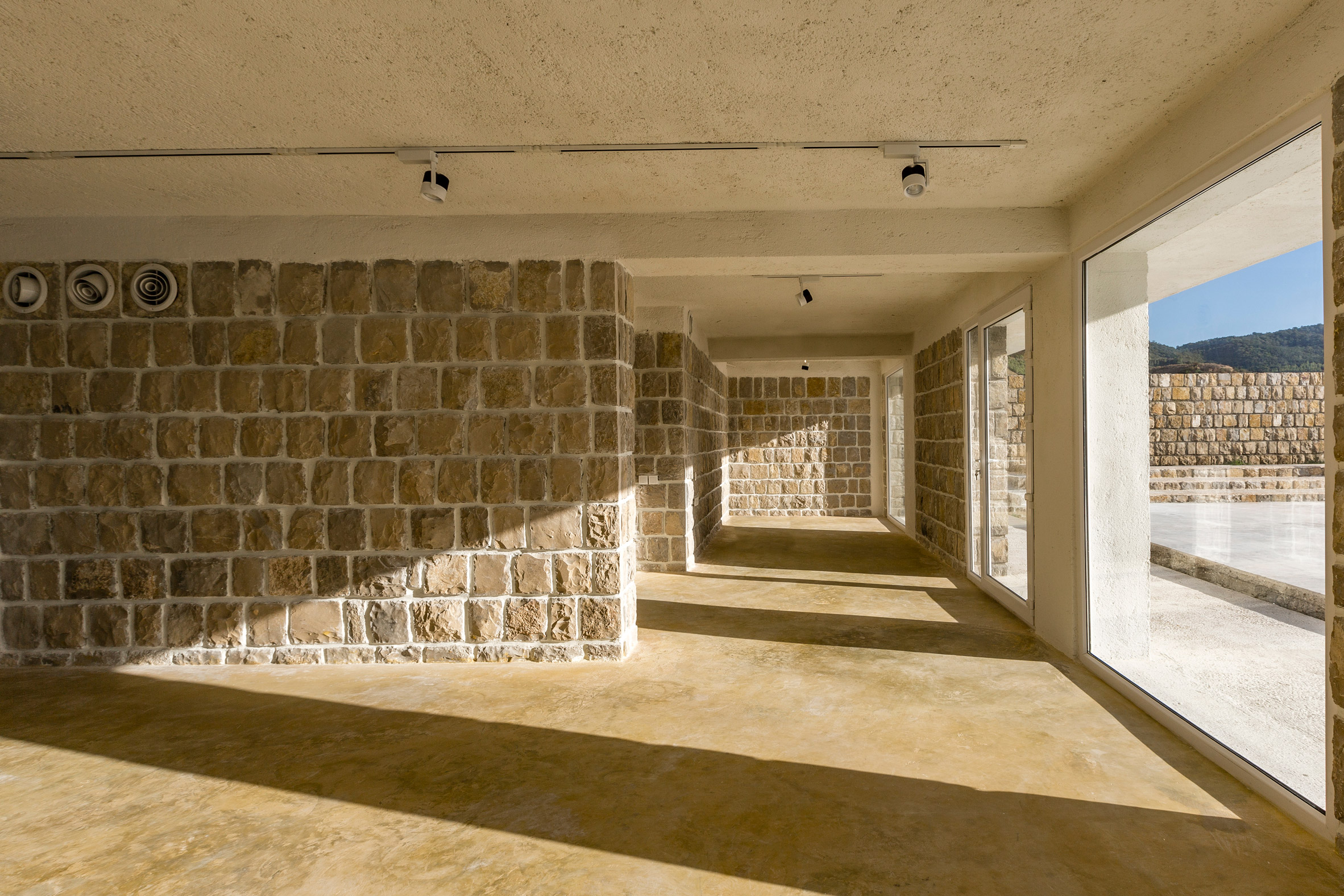 The house and large barbecue pavilion are finished in a render that is left exposed internally as well as externally. Consistent flooring surfaces help to reinforce the connection between indoor and outdoor spaces. 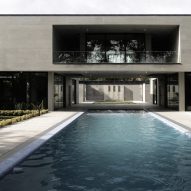