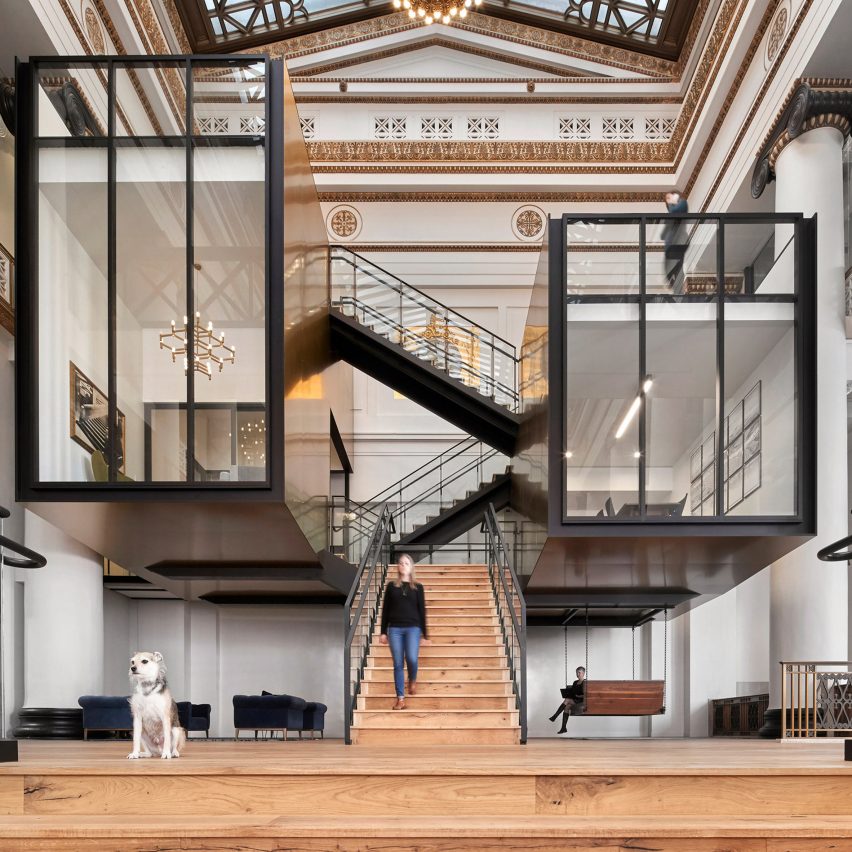 A swinging chaise and a hidden salon are among features in this tech company headquarters, housed inside a century-old bank in Portland, Oregon. 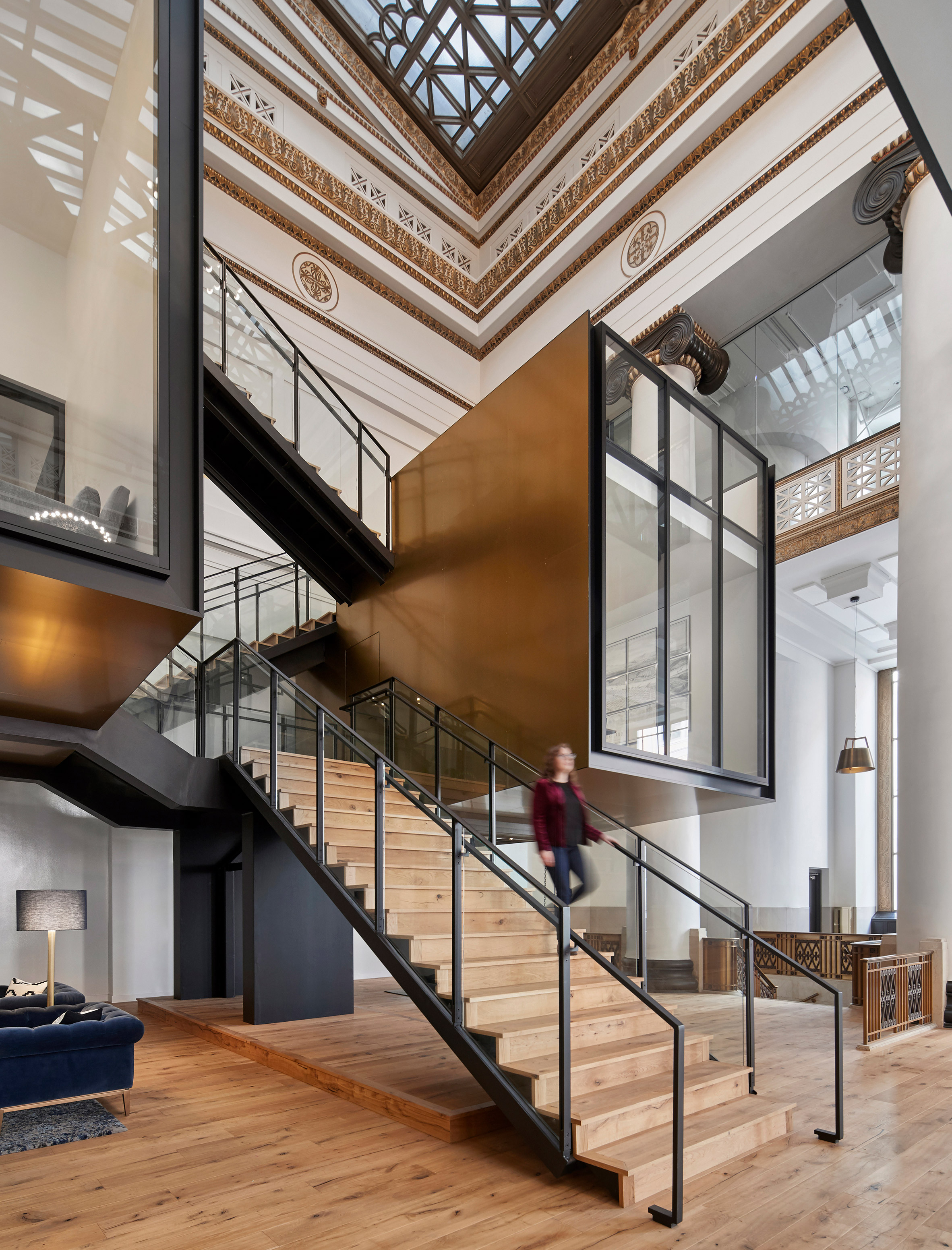 Designed by local practice ZGF Architects, the office was created for Expensify, which develops software for tracking charges and creating expense reports. Founded in 2008, the company has offices in several cities beyond Portland, including San Francisco and London. For its Oregon location, the company decided to lease the National Landmark First National Bank, which dates to 1916 and was designed by Coolidge and Shattuck. Classical columns and stone cladding define the building’s stoic exterior. 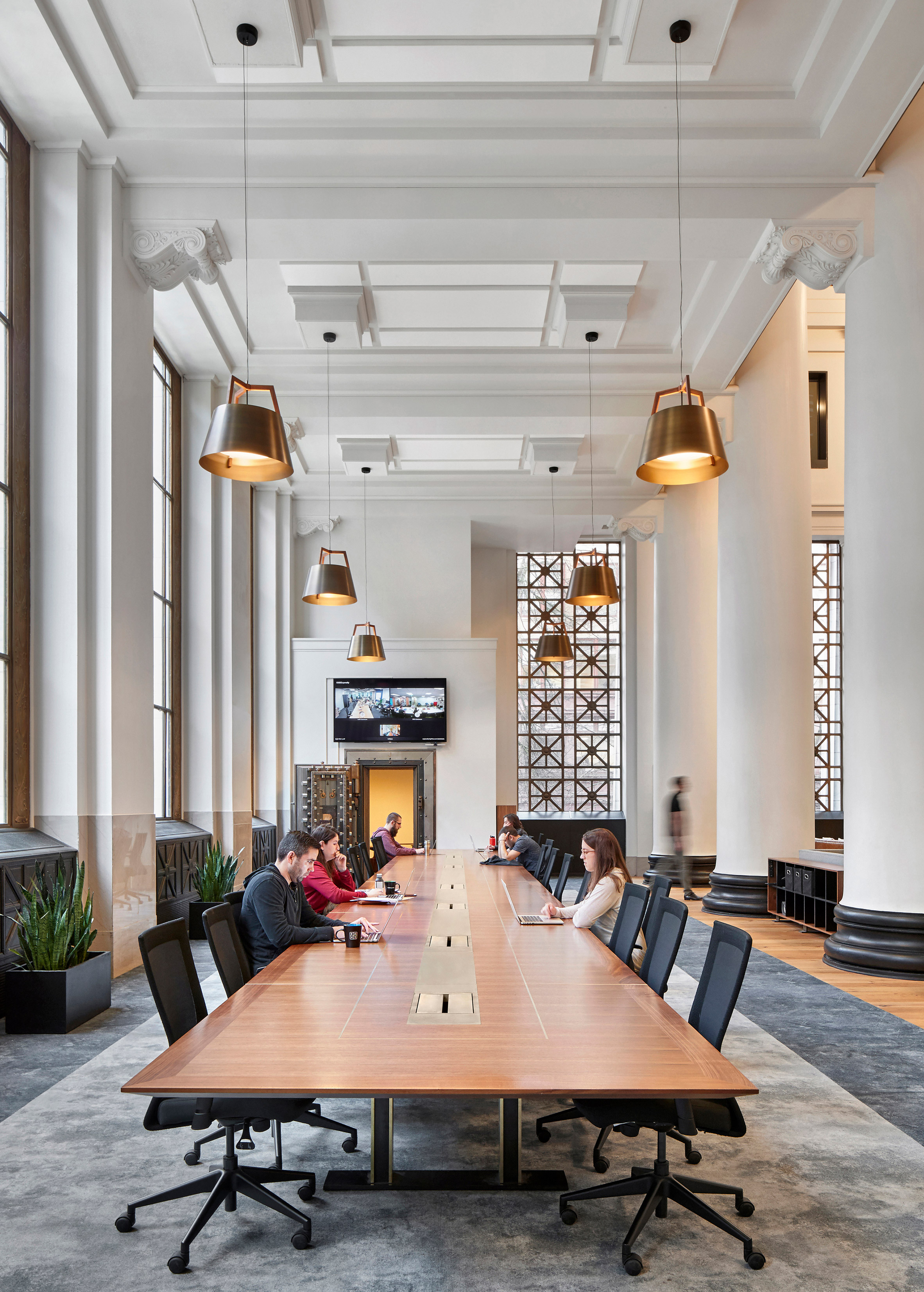 For the interior, ZGF worked with Expensify to create a space that reflects the company’s preference for a “choose-your-own-adventure” work environment, in which seating is not assigned and employees are able to work in a variety of spaces. The approach pays homage to the early days of Expensify, when the staff worked out of coffee shops. Later, they worked in a San Francisco office with open seating. 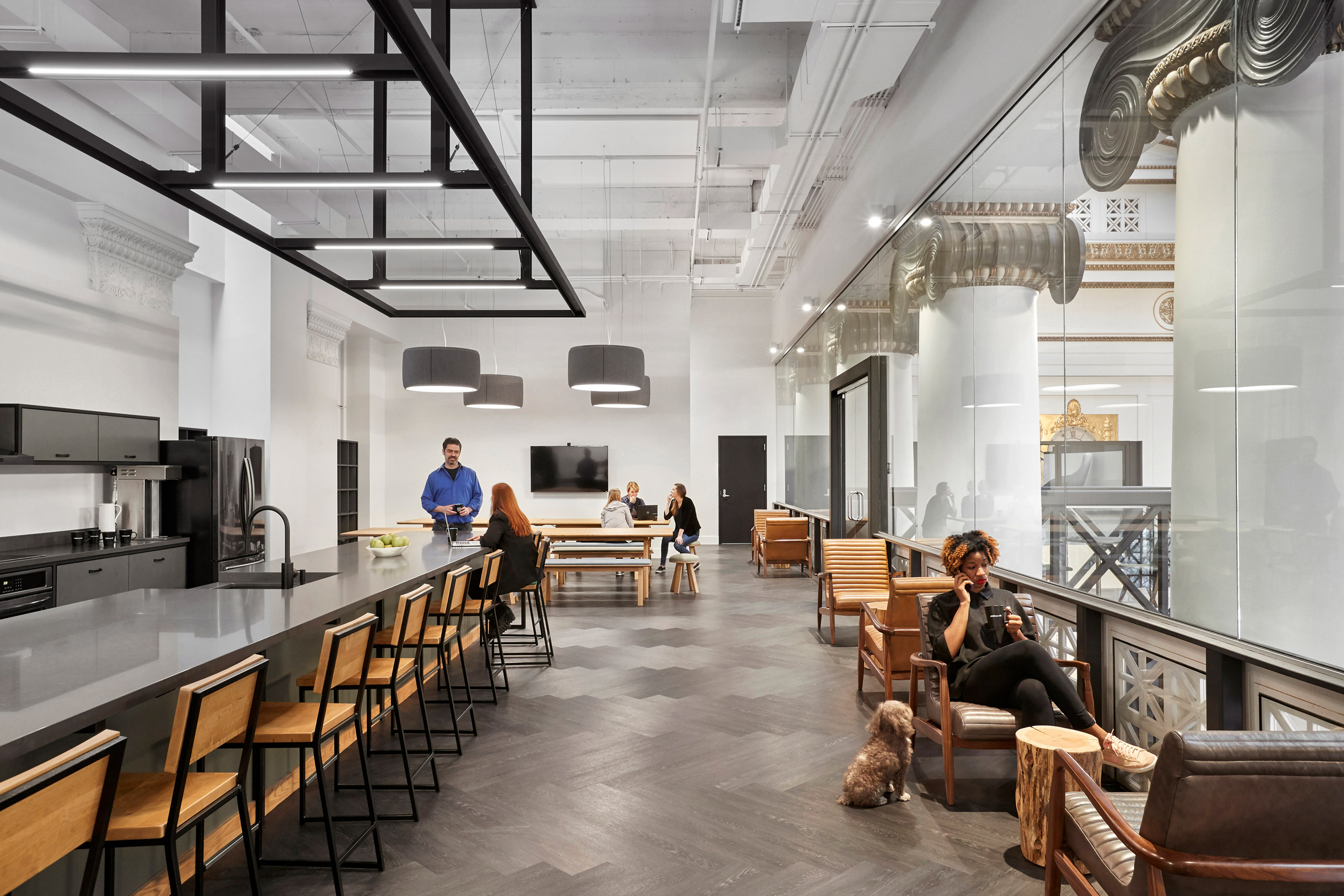 In addition to creating an office that embodies the company spirit, the design team had to be mindful that they are renting the space.

“Keeping in mind Expensify does not own the building, design interventions had to speak not only to the enduring grandeur of the existing interiors but also the realities of a finite lease term,” the firm said. The team therefore conceived an open, dynamic space that fuses remnants of the past with modern elements.

At the centre of the building is a vast, skylit atrium with soaring classical columns, art-deco detailing and large bank vaults. The team sought to create an atmosphere that is “reminiscent of Grand Central Station or scenes from The Great Gatsby”.

The team inserted a series of staircases that connect the different levels. Flanking one set of stairs are two “floating” glazed boxes containing conference rooms. The boxes’ proportions and detailing are mean to reference the building’s historical character. 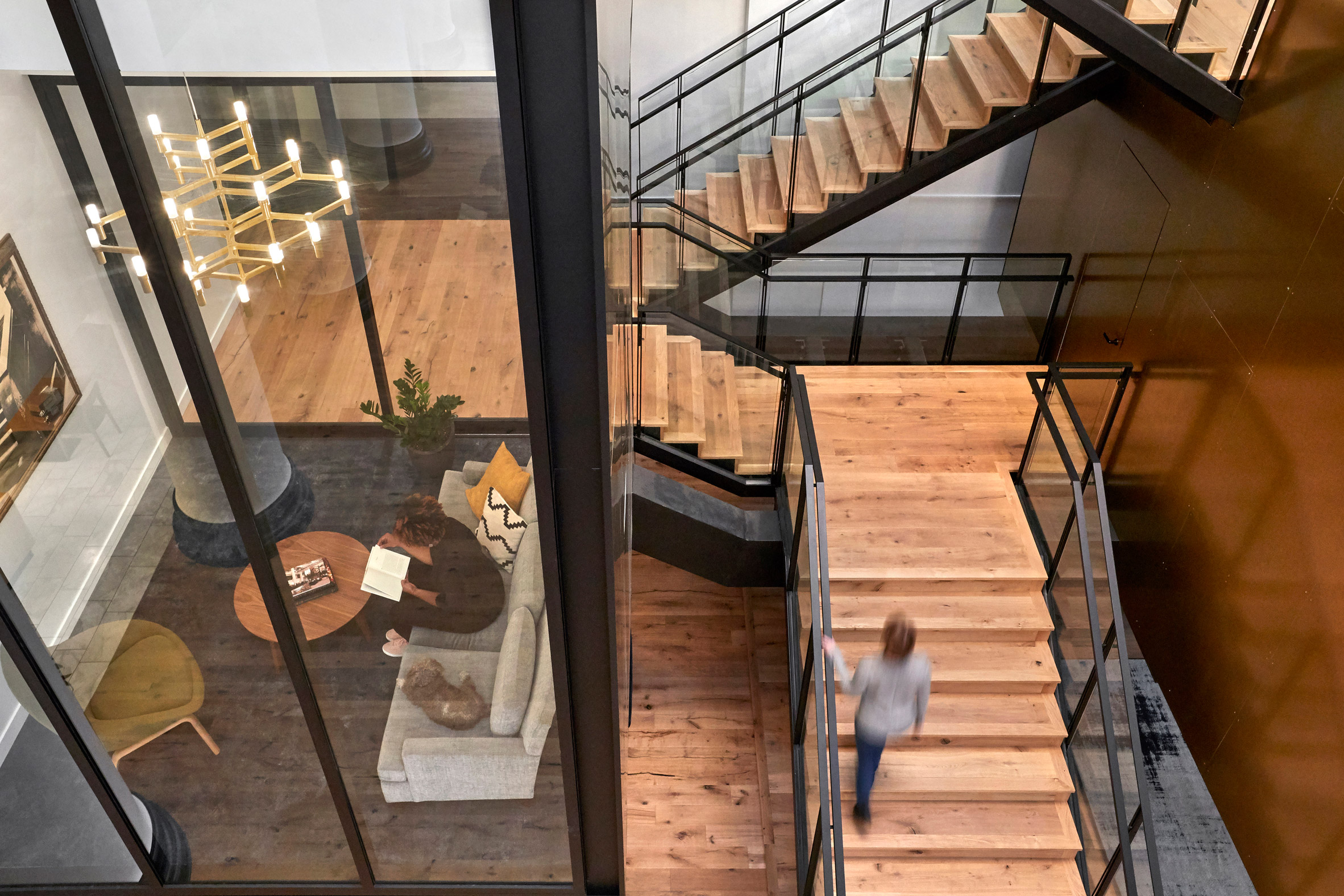 Atop the boxes are “open crow’s nest perches” that serve as work areas. Below one of them is a swinging chaise, where employees can work while in a reclined position. 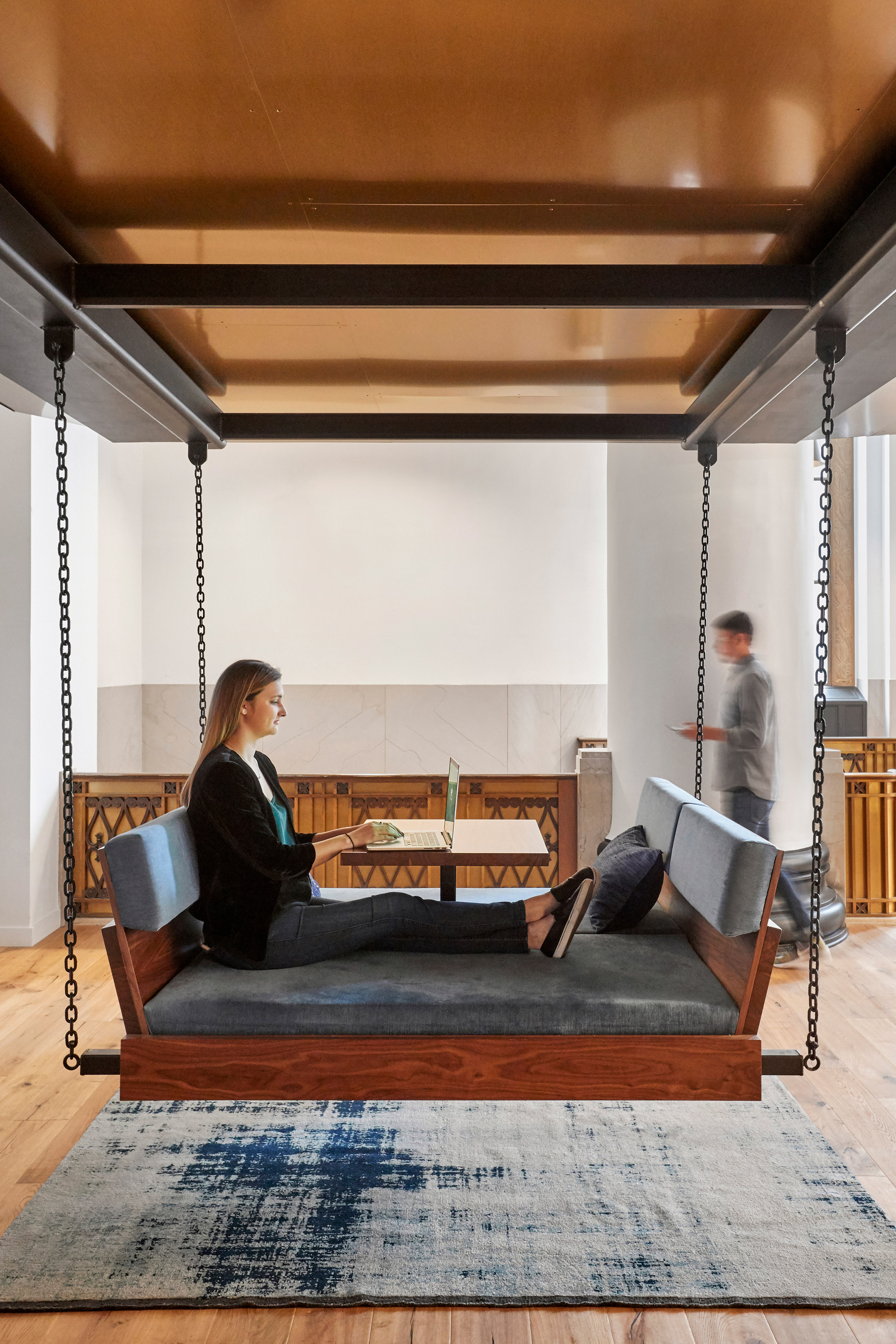 Ringing the atrium are a variety of rooms spread across two levels and a mezzanine. On the main floor, the team created a living room with overstuffed ottomans and a kitchen stocked with snacks and on-tap kombucha. In an open workroom, the team placed a 41-foot-long (12-metre) table made of wood with brass inlay. 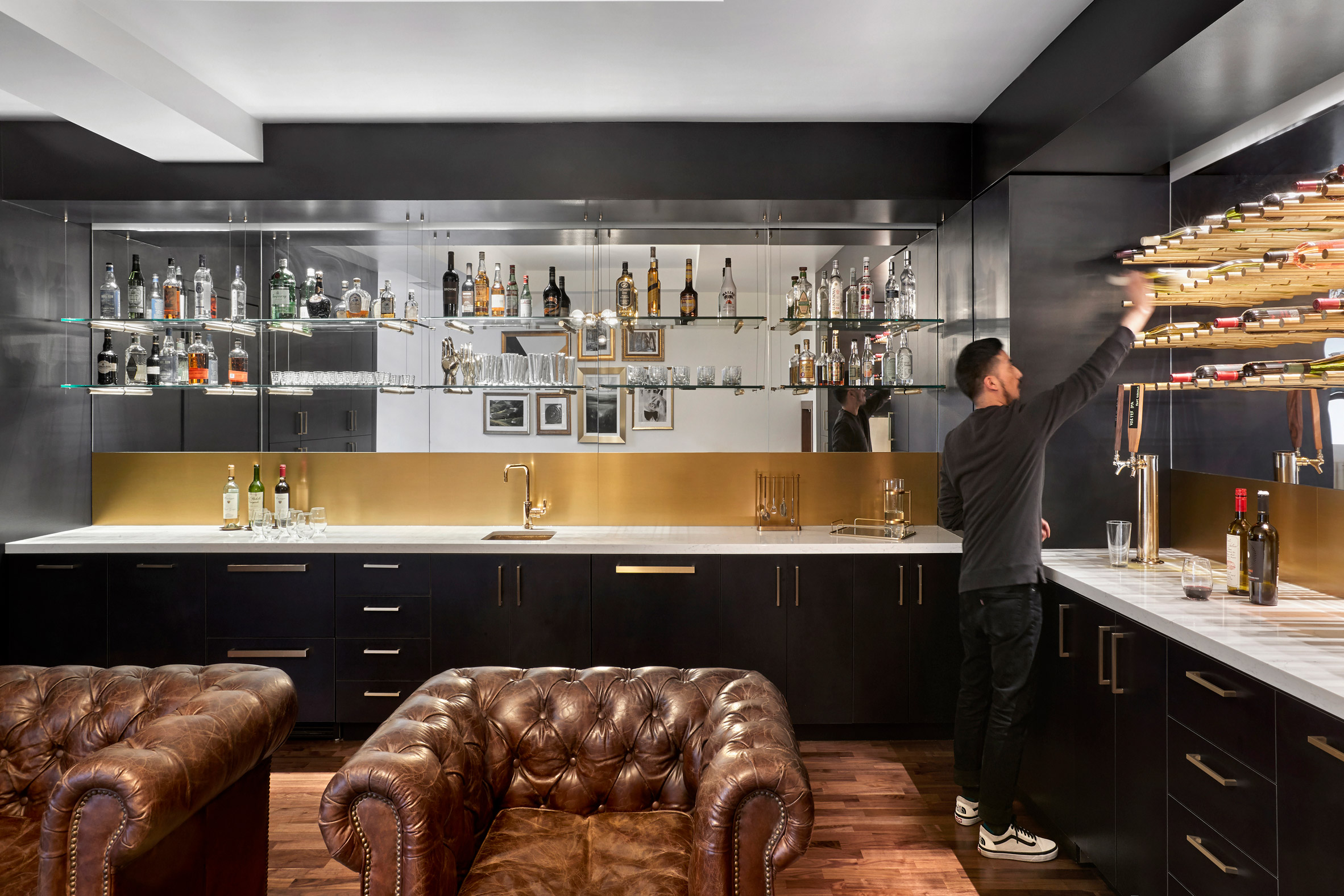 Meant to channel a Mad Men aesthetic, the mezzanine level features a boardroom and a speakeasy-style salon with mirror-clad walls, which is accessed via a set of hidden doors. The third floor has a more subdued feel. 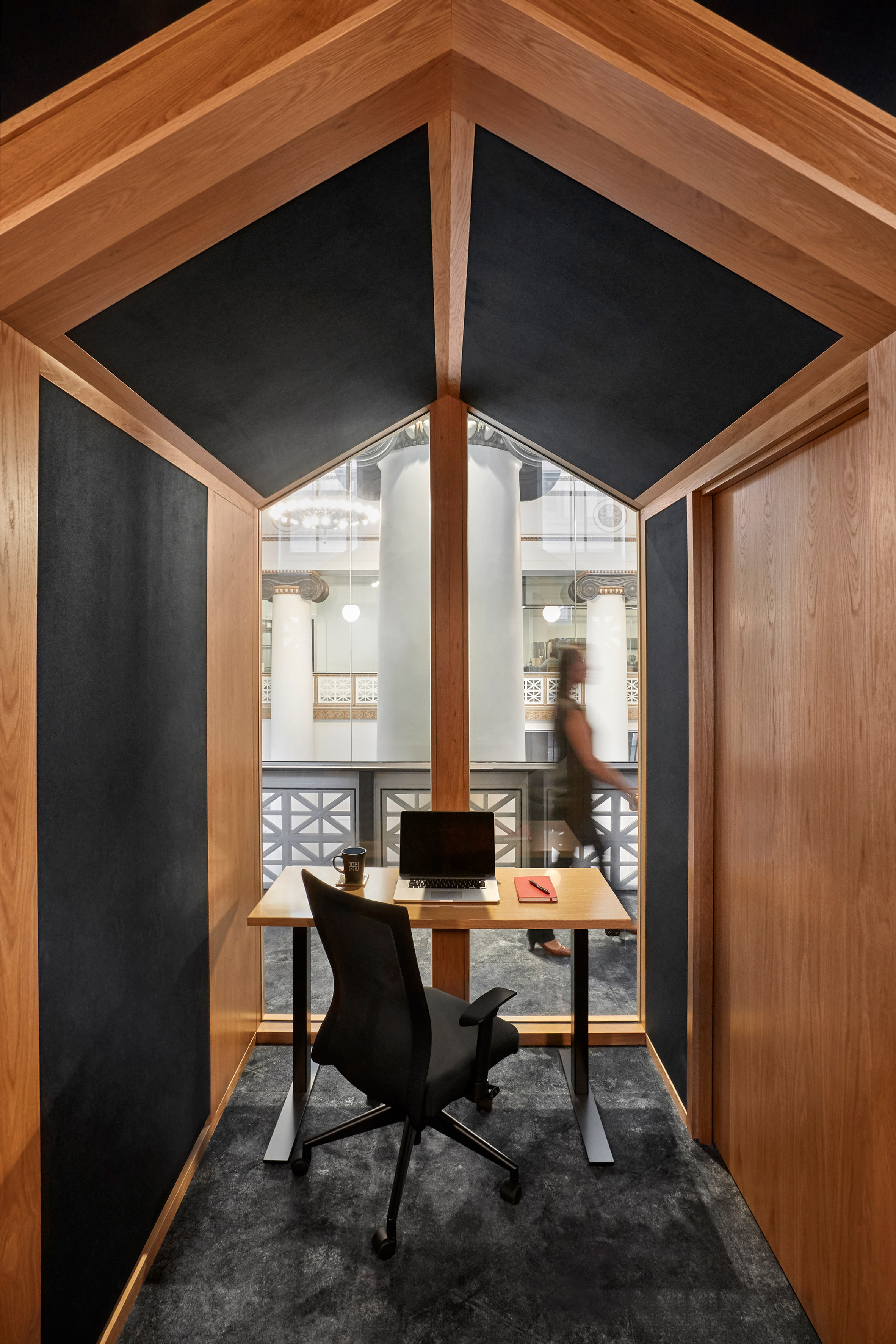 “On the third floor, an oak wood ‘village’ – designed with forms reminiscent of Scandinavian building techniques and style – offers community and individual seating for private calls and heads-down work,” the team said.

“Expensify employees have fully embraced the new office, and on any given day can be seen moving from one space to another, with device tucked under arm and often with a dog or two in tow,” the team said. Another recent project by ZGF Architects is the Google Spruce Goose office in Los Angeles, which entailed the conversion of an airplane hangar into an open and light-filled workspace.

Photography is by Garrett Rowland.