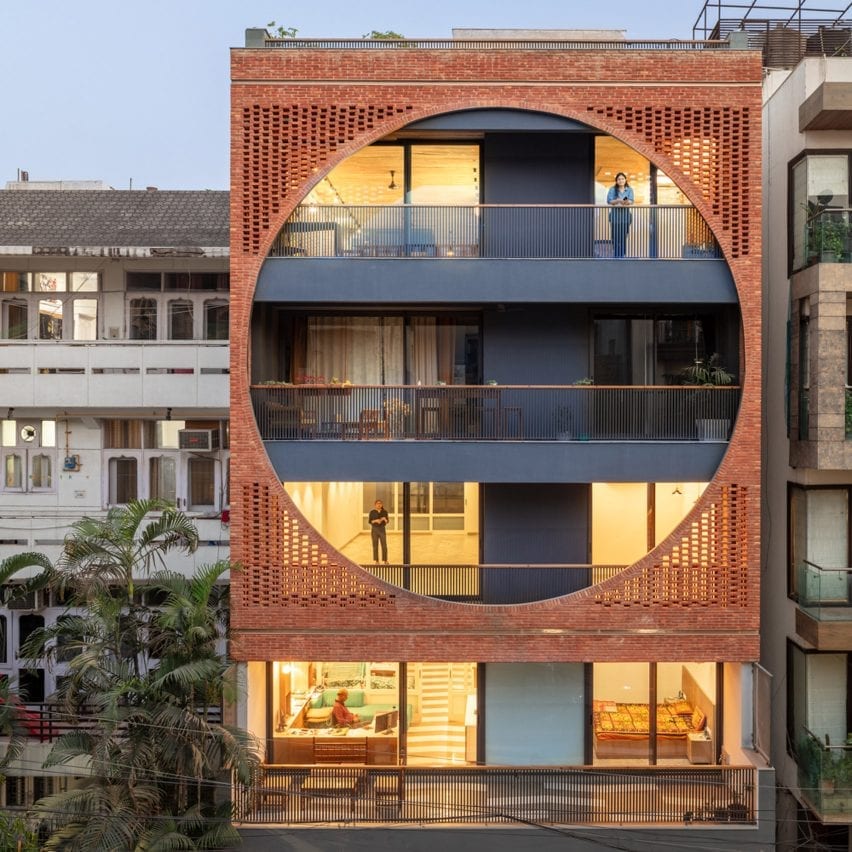 The studio headed by architect Amit Khanna designed the Safdarjang Residence for a site on a quiet residential street in India’s capital city.

The building contains four apartments raised above a parking level that also accommodates utility spaces including the staff quarters.

On the elevation facing the street, a perforated screen made from brick tiles extends across the full height of the upper three storeys. The square screen inscribes a large circle that frames the full-width balconies.

The bold design was informed by the work of American architect Louis Kahn, who was responsible for several important projects in India and Bangladesh in the early 1960s.

Kahn’s architecture often featured monumental volumes that visibly expressed their construction. He favoured materials such as textured brick and bare concrete, which he used in innovative ways to create poetic and expressive buildings.

One of Kahn’s key projects in India was threatened with demolition earlier this year. The 18 dormitory buildings at the Indian Institute of Management Ahmedabad feature brick facades punctured by openings in the shape of arches, circles and squares.

It is this combination of monolithic forms and geometric voids executed with precision using robust materials that AKDA attempted to emulate in the design of the New Delhi house.

“The facade of this building could be seen as a response to the context or a reflection on materiality,” said Khanna of the use of brick at the Safdarjang Residence.

“However, what it truly represents is an ongoing conversation in the history of modern architecture in India. The facade is a paean to the idea of architecture as imagined by a singularly extraordinary architect (Kahn).”

The decorative facade element is supported by a steel framework that forms a large tension ring. The brick tiles are laid in a jaali pattern around the circular opening.

The site on which the apartment building is located is just nine metres wide and is hemmed in by its neighbours on both sides.

The architects grouped all of the services in a core on one side of the building, leaving the living areas open so light can pour in through large openings at either end. On the top floor, an open-air courtyard is incorporated into the floor plan.

Each apartment contains two en-suite bedrooms and a kitchen arranged around the central stairwell, with the open area housing a lounge, dining area and a study or puja prayer room.

The interiors continue the tribute to Kahn through their use of robust and honest materials. Walls formed of exposed brick are complemented by board-formed concrete ceilings and locally sourced Kota stone floor slabs.

In the top-floor apartment, mustard-yellow Jaisalmer stone provides a pop of colour in the courtyard and bathrooms, while blue, handmade tiles form a backsplash above the kitchen’s stainless steel counter.

Each apartment has a balcony at the front and rear. On the top floor, a staircase featuring cantilevered stone steps ascends to a roof terrace.

Elsewhere in India, Diana Kellogg Architects created an oval-shaped school in the Thar Desert that used symbols of femininity to inform its design.

While Indian architect, Saket Sethi created an egg-shaped garden temple that was designed to reflect a galaxy.

Photography is by Andre Fanthome.