Built-in wooden units and sheer, full-height curtains soften the otherwise stark interior of this apartment located within a canalside regeneration project near Antwerp. 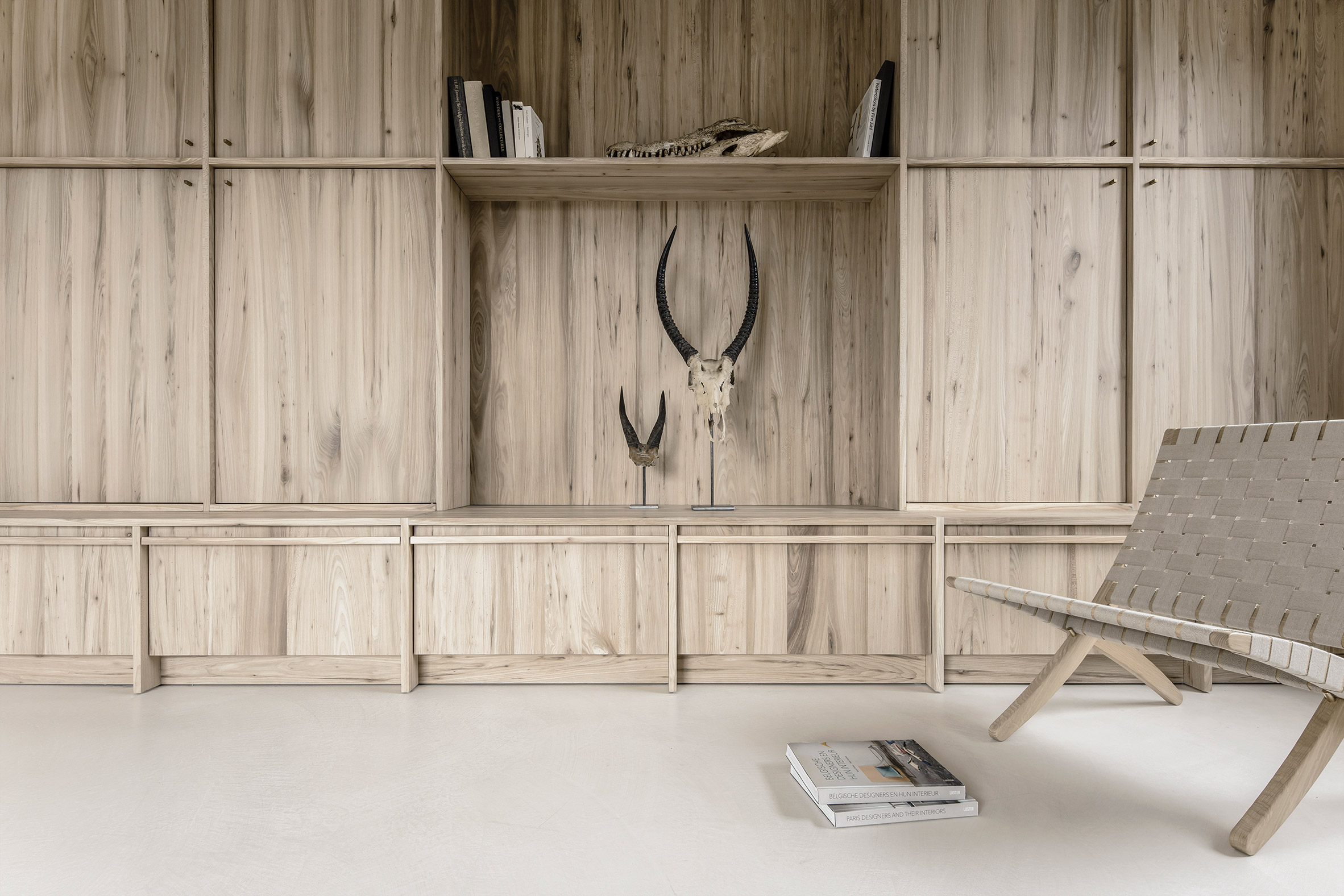 The apartment designed by interior architect Arjaan De Feyter is located within one of four new-build blocks called The Cubes, which were developed by Brussels-based architecture firm Bogdan & Van Broeck.

The Cubes form part of a conversion of a former brewery and malt house site beside the Albert Canal outside Antwerp, which has been transformed into a mixed-use development containing apartments, offices, artists studios, a museum and public squares. 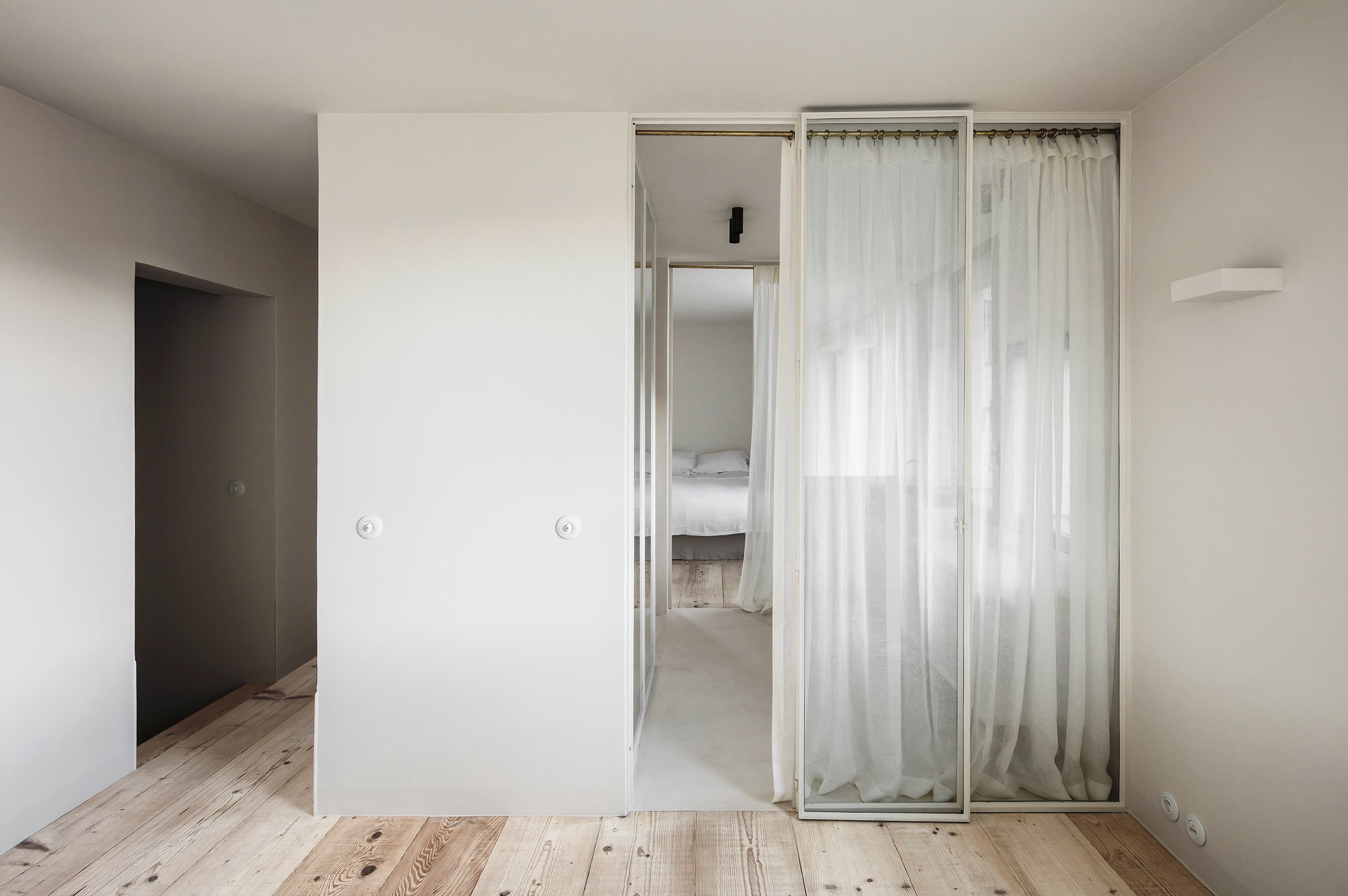 De Feyter has his office in the Kanaal development, and it was following a visit to the office that his client, a local builder and blacksmith, discovered the project and decided to purchase one of the residential units.

The apartment was an empty shell when it was bought, so the designer’s task was to adapt the existing spaces to create a comfortable and cohesive interior environment that fulfils the owner’s practical and aesthetic needs. 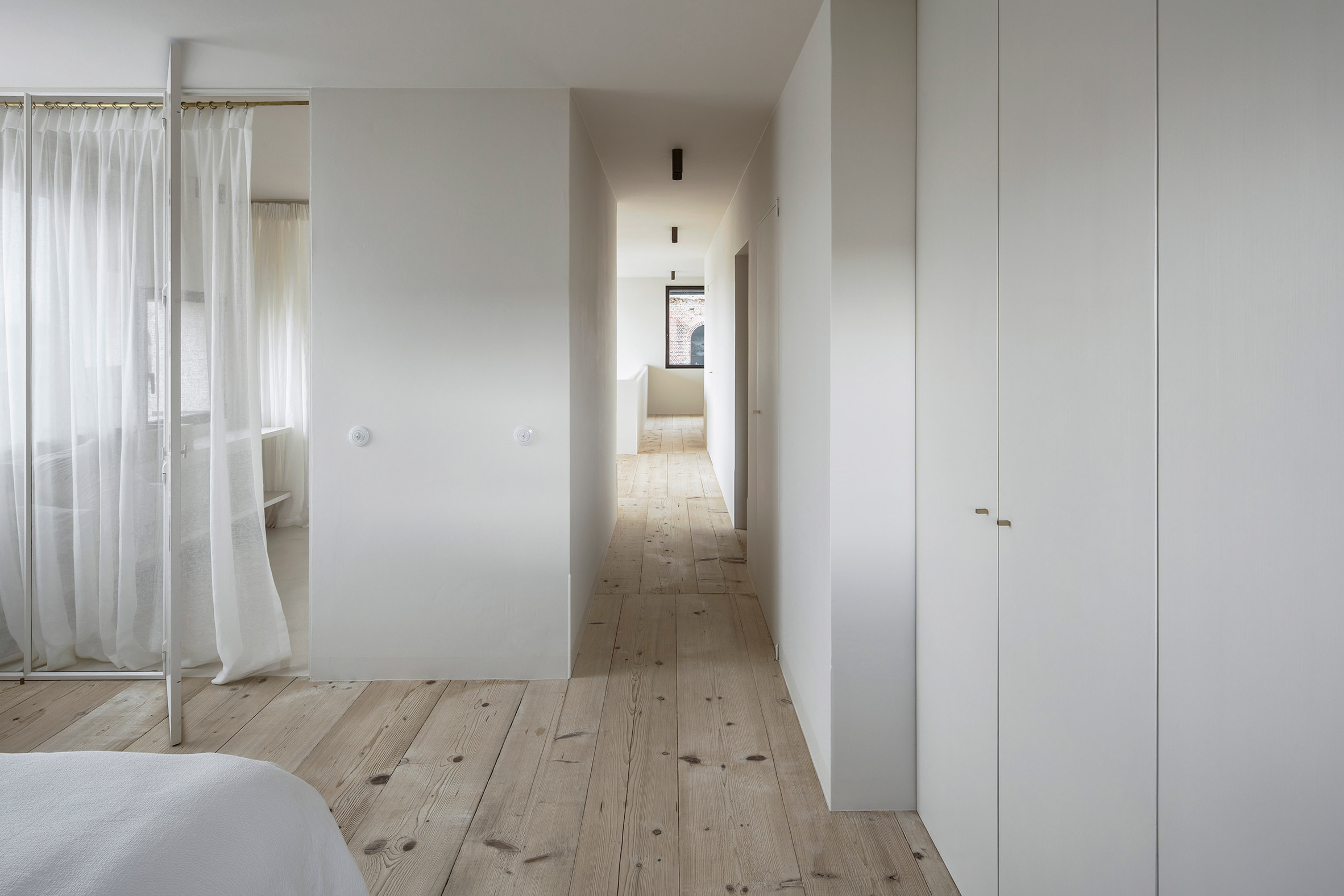 “The client wanted to work with honest and warm materials,” De Feyter recalls. “He was looking for a contemporary design with an eye for craftsmanship, detail and finish.”

“We try to reflect the personality of the customer in the project, and combine that with the context of the building and our own architectural style,” the designer added.

“Here we wanted to create a very open and soft character with light and warm materials.” 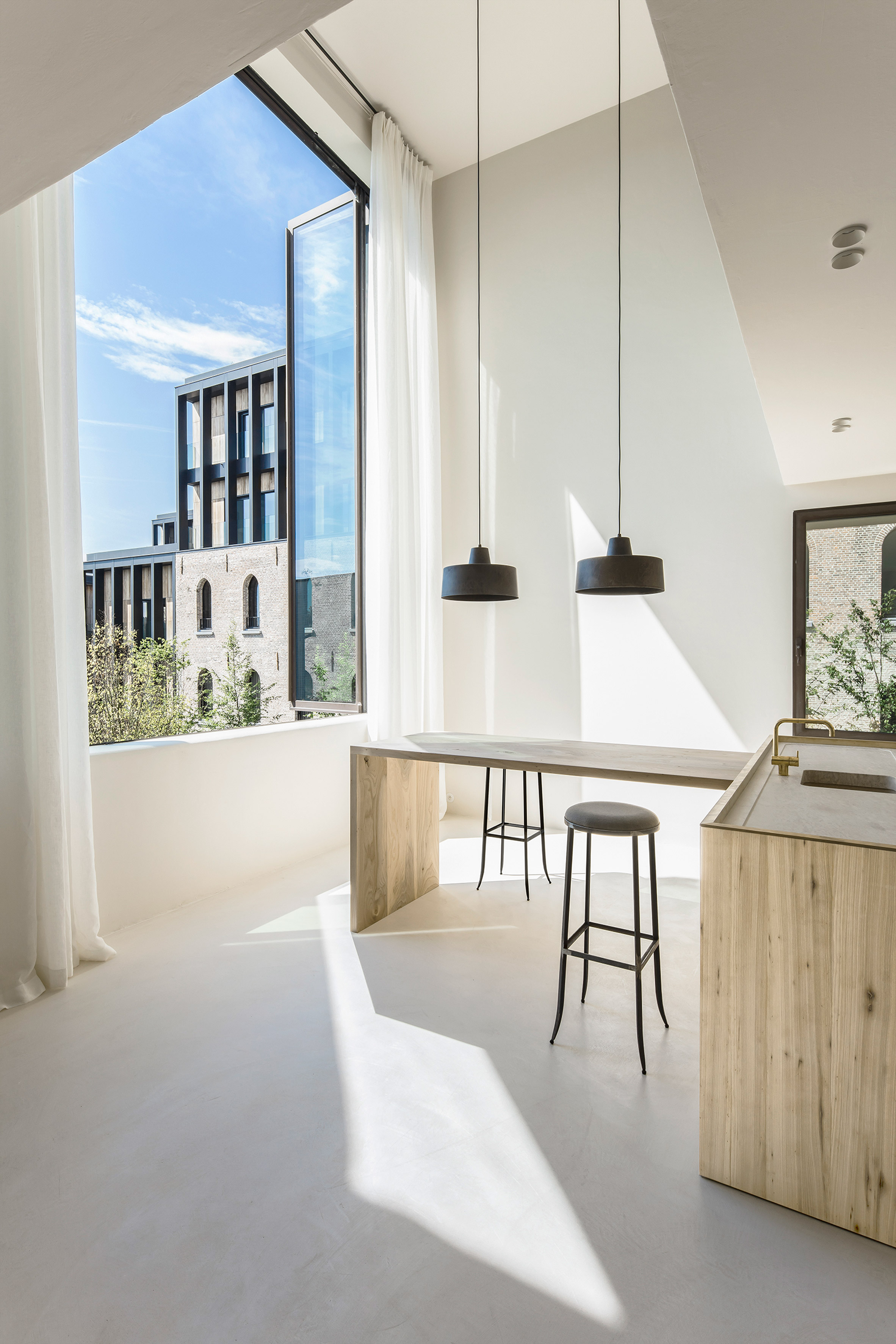 Each of the apartments in The Cubes is a duplex stacked in different orientations to provide varying views from large windows incorporated into the facades.

The main living space comprises a double-height room overlooked by a mezzanine, within which the designer installed a kitchen featuring a tall central island.

The kitchen cabinetry is constructed from distinctively grained solid wood, which introduces natural warmth and texture to the otherwise minimal and austere space. 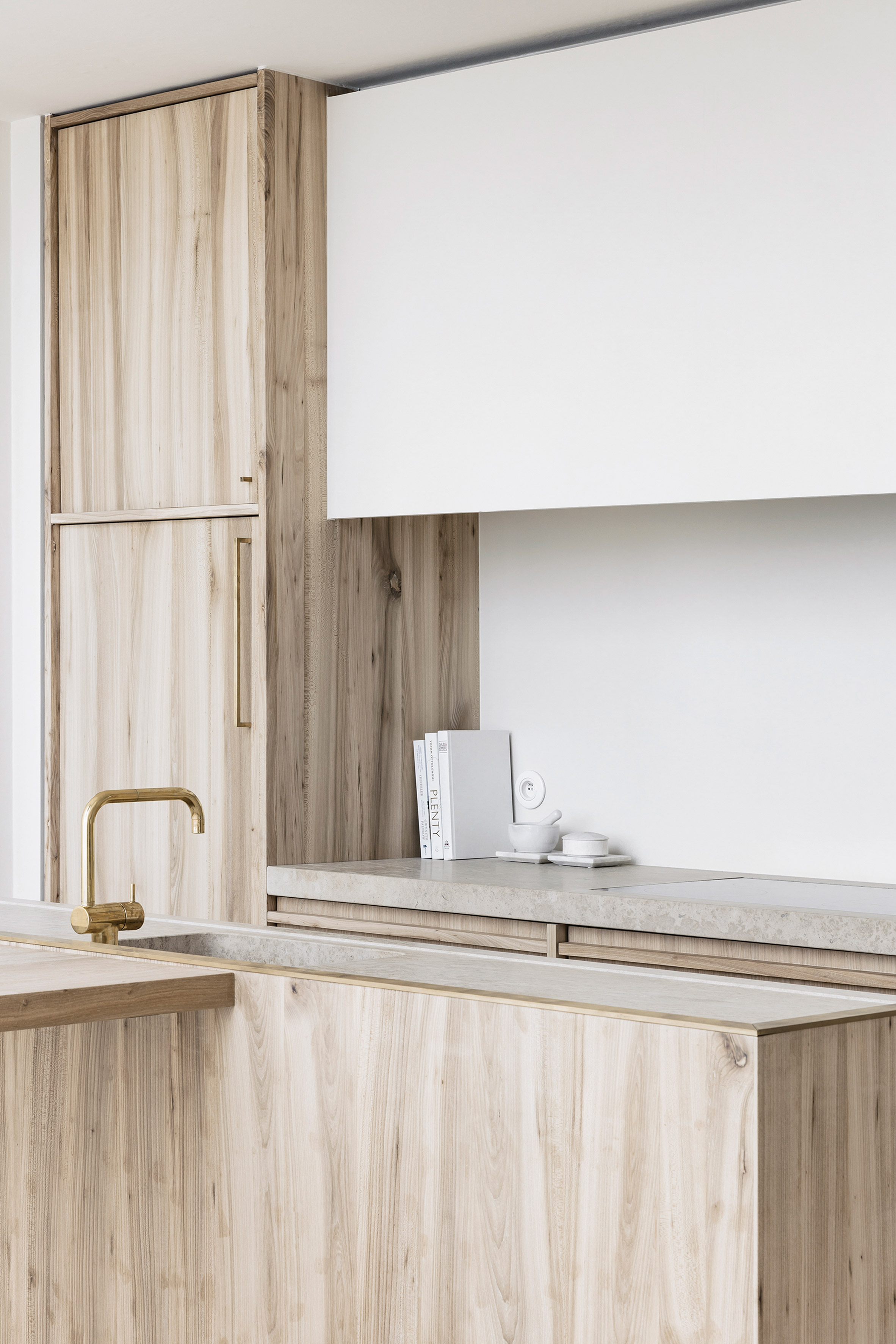 A tall window set into the main exterior wall of this room can be folded to one side to allow air to flow in past gauzy curtains that hang all the way down from ceiling to floor.

The rest of the open-plan space at this level accommodates a dining area and lounge lined with more built-in wooden cabinets. A staircase with timber treads ascends to the apartment’s upper floor, where the master bedroom is located.

A glazed wall and door separates the bedroom from a wetroom-style bathroom featuring a walk-in shower, which is screened off from the rest of the space by a glass partition. 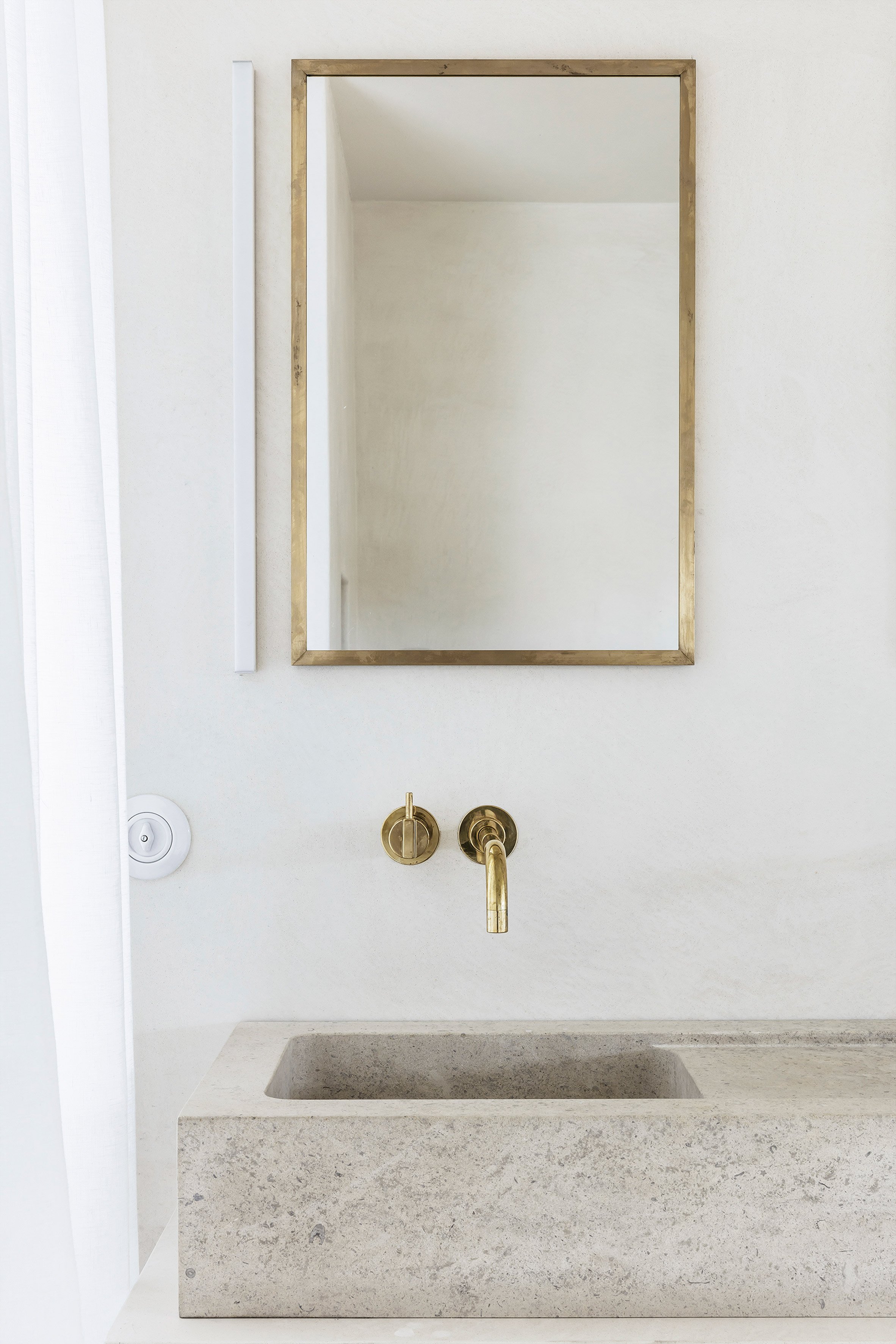 Brass hardware used in the bathroom and kitchen, as well as for details such as the bathroom mirror and cabinet handles, introduces a further warm and tactile detail.

The growing popularity of brass in the interior was explored in a feature on Dezeen in 2014 and since then the trend for using the warm-hued metal has showed no sign of slowing down. Earlier this year Dezeen featured a Greek delicatessen-inspired Melbourne cafe with brass hardware accents and a home for a musician which features brass walls. 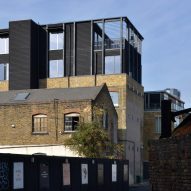