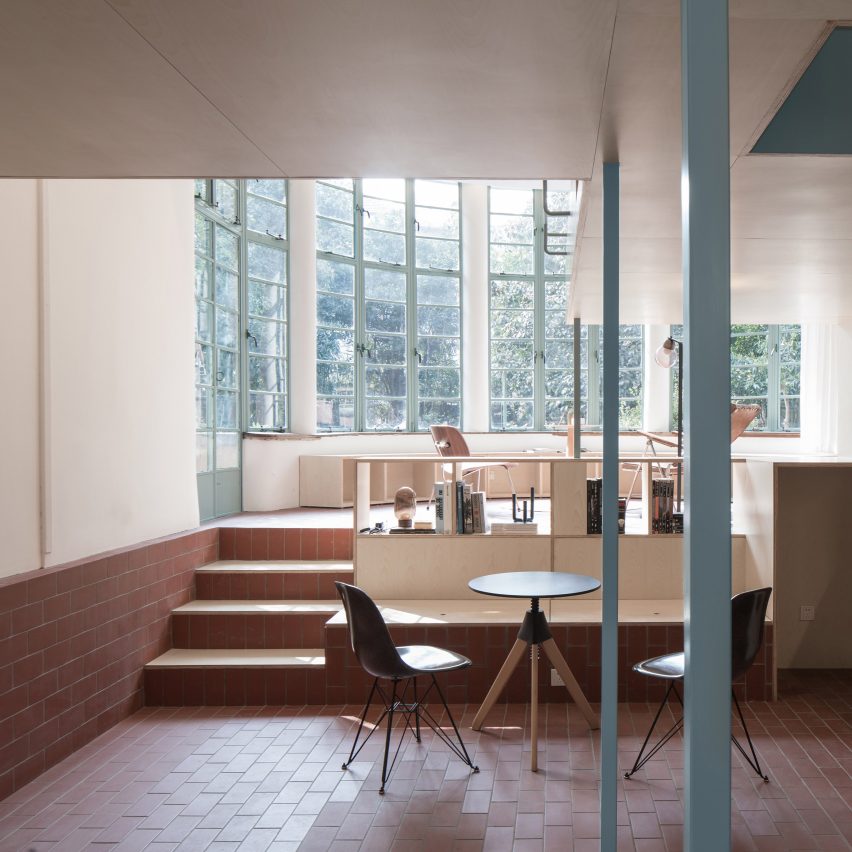 Fronted by a huge bay window that curve out from its front facade, the aptly named U-shape Room apartment has been overhauled to feature a multifunctional wooden volume that Atelier Tao + C compares to a large piece of furniture. 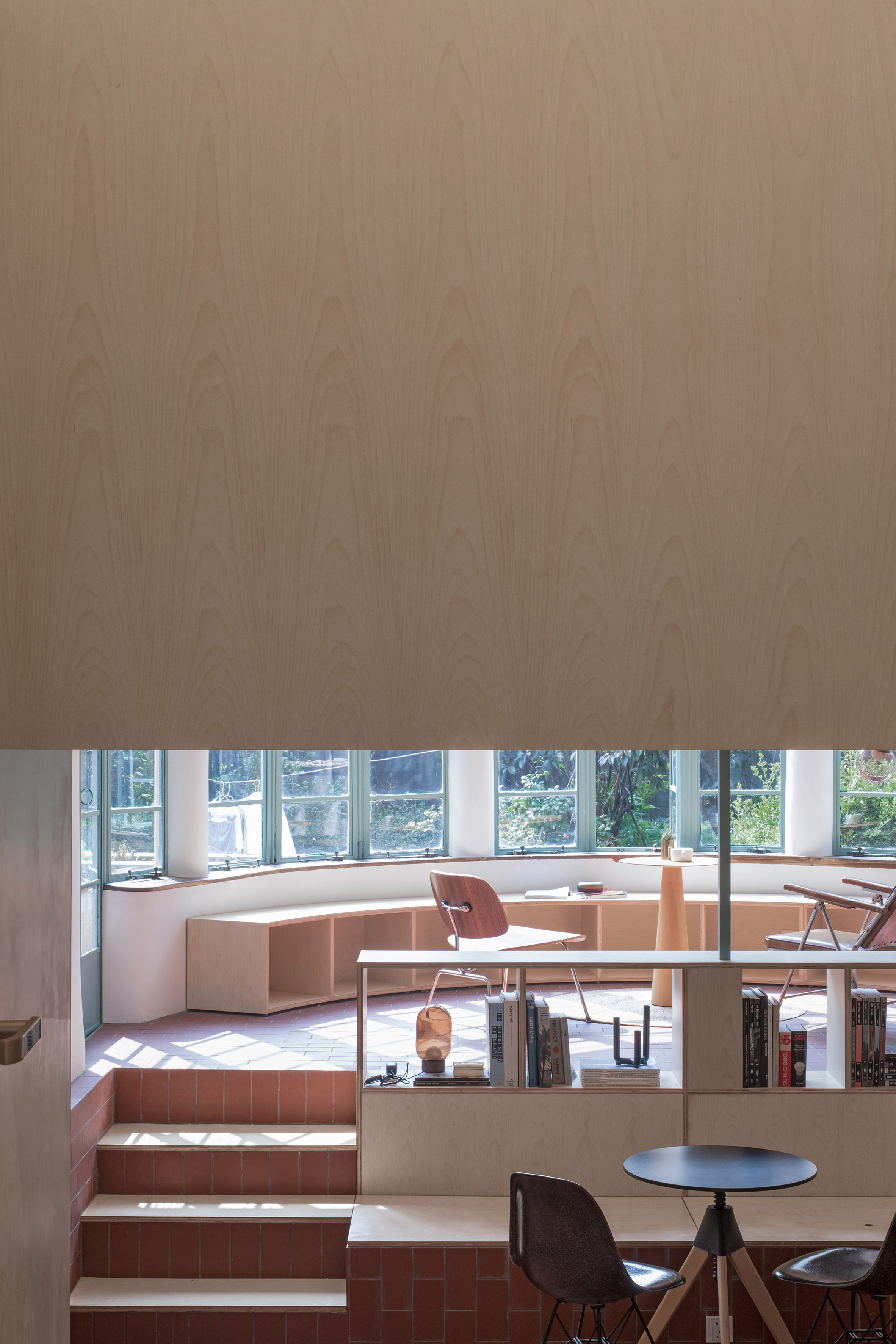 The 42-square-metre apartment is the former ballroom of a residence that dates back to the Shanghai French Concession, the period between 1849 and 1943 where the city was occupied and governed by the French state.

For many years the property was occupied by one family before being divided into bedrooms for several individual occupants, who would share bathrooms and kitchens – increasingly poor hygiene conditions and lack of space meant that the home was eventually abandoned. 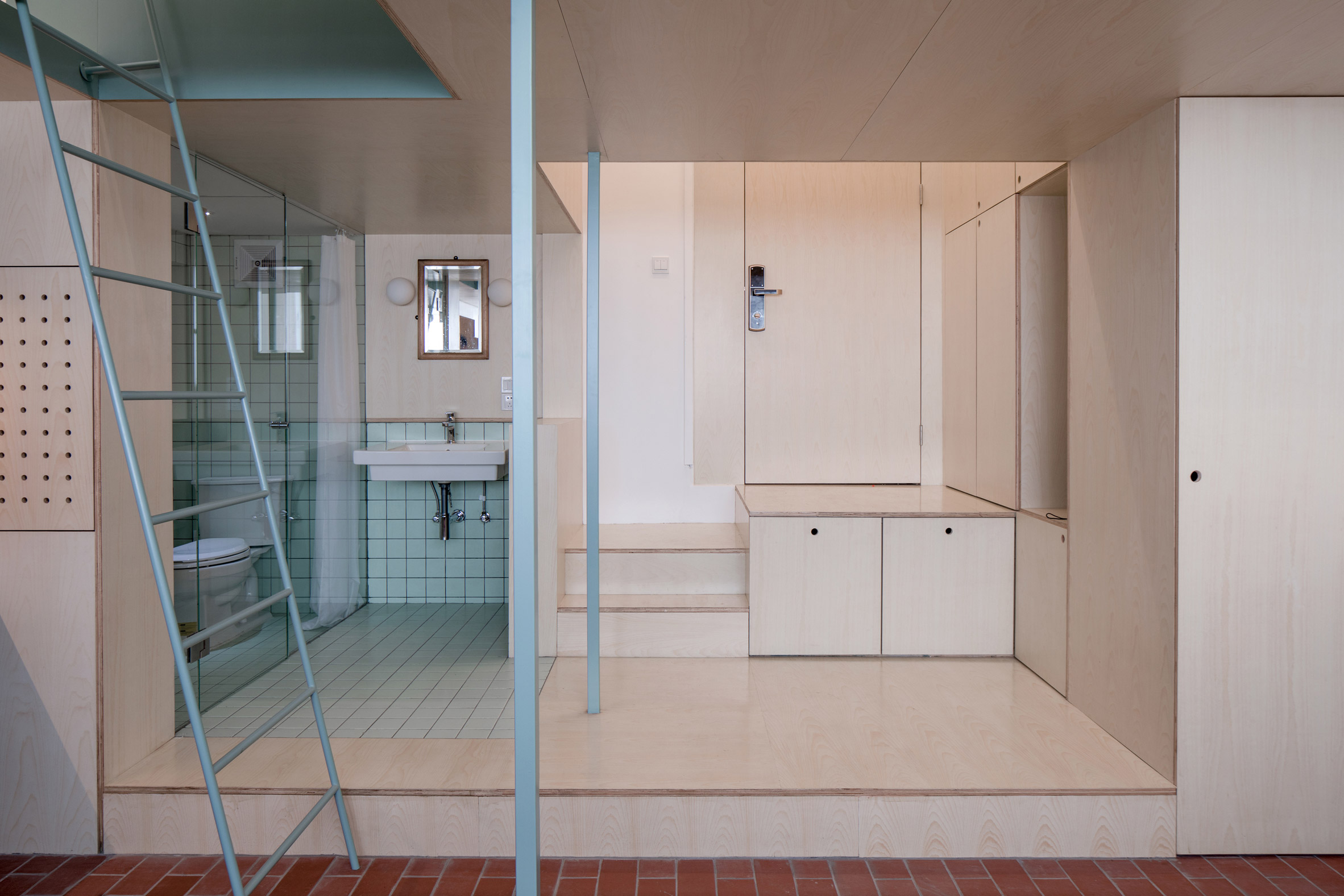 To revive the empty room and return it to a liveable state, the studio decided to erect a two-level maple plywood volume to accommodate all the functional rooms of the apartment.

“In this project, the function of walls and floors is replaced by furniture, which becomes a kind of architectural miniature,” said Atelier Tao + C. 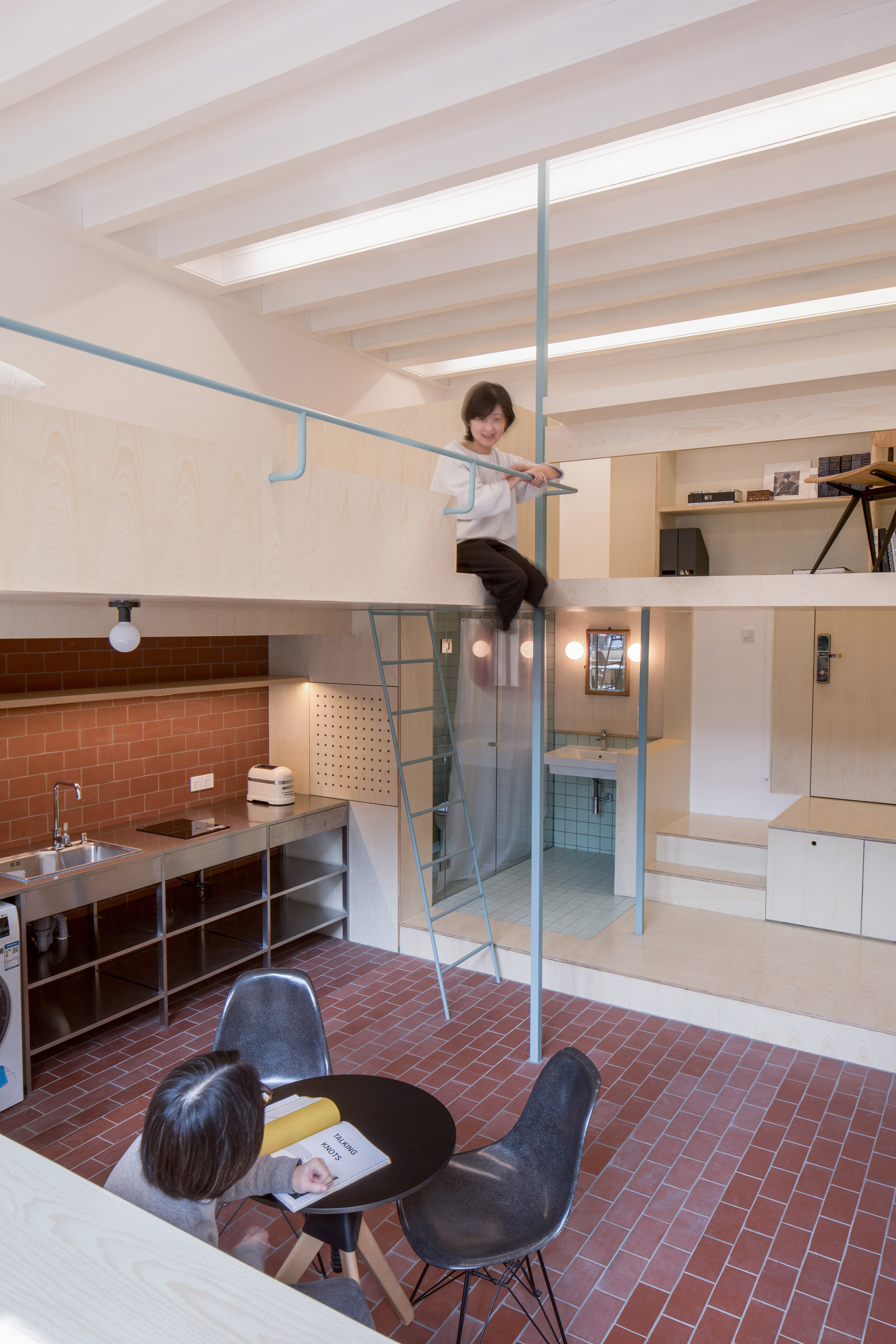 At ground level the volume plays host to storage cupboards and a bathroom clad in pale blue tiles, nodding to the colour of the window frames.

The toilet and shower are separated by a glass screen, but a white curtain can be drawn across for additional privacy. 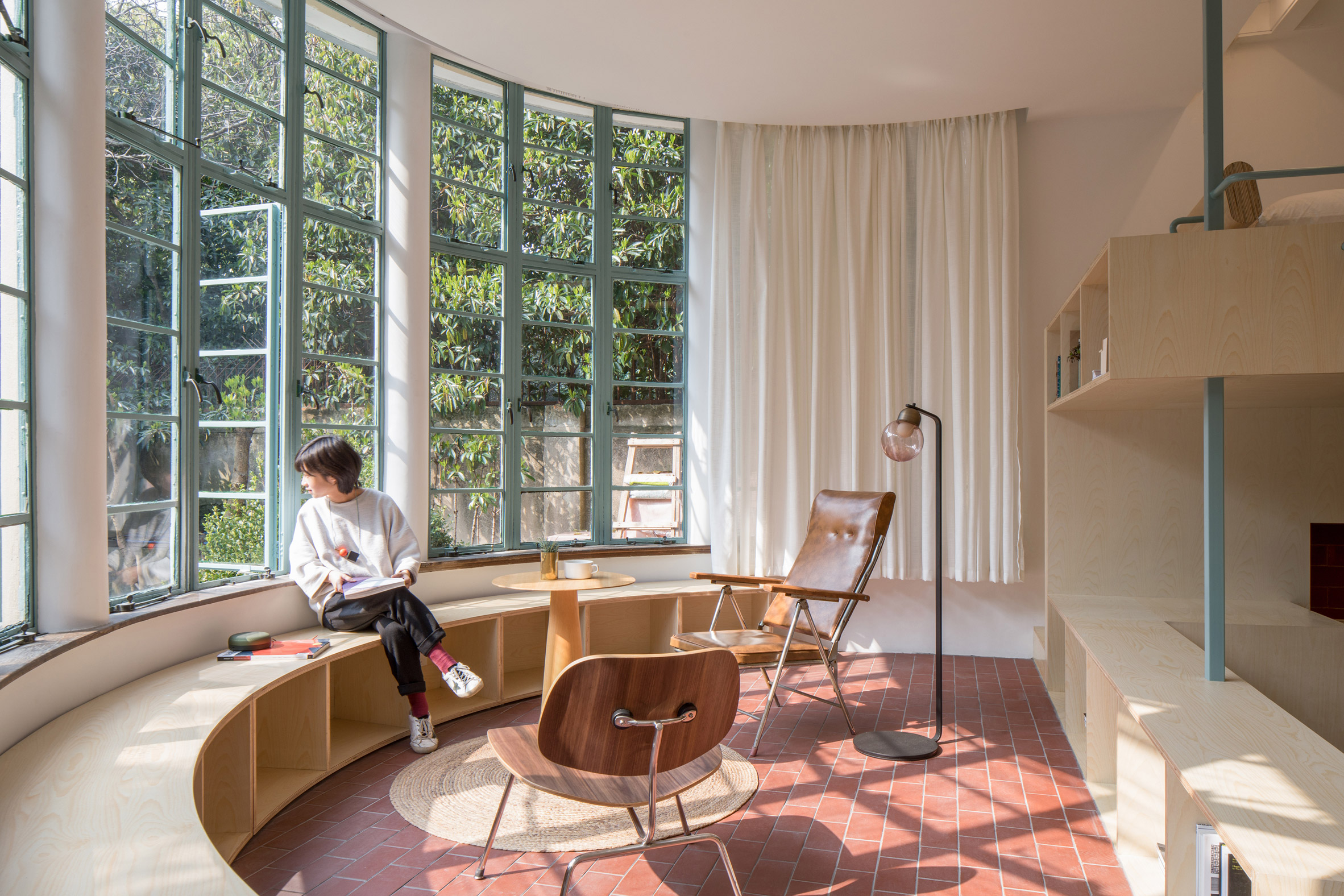 The volume steps down to a simple kitchen and dining room that has been completed with a stainless steel counter and terracotta brick splash back that matches the apartment’s floors.

“Through an intense carving out of volumes and a densely layered composition, it creates different niches, nooks and divides up activity spaces,” said the studio. 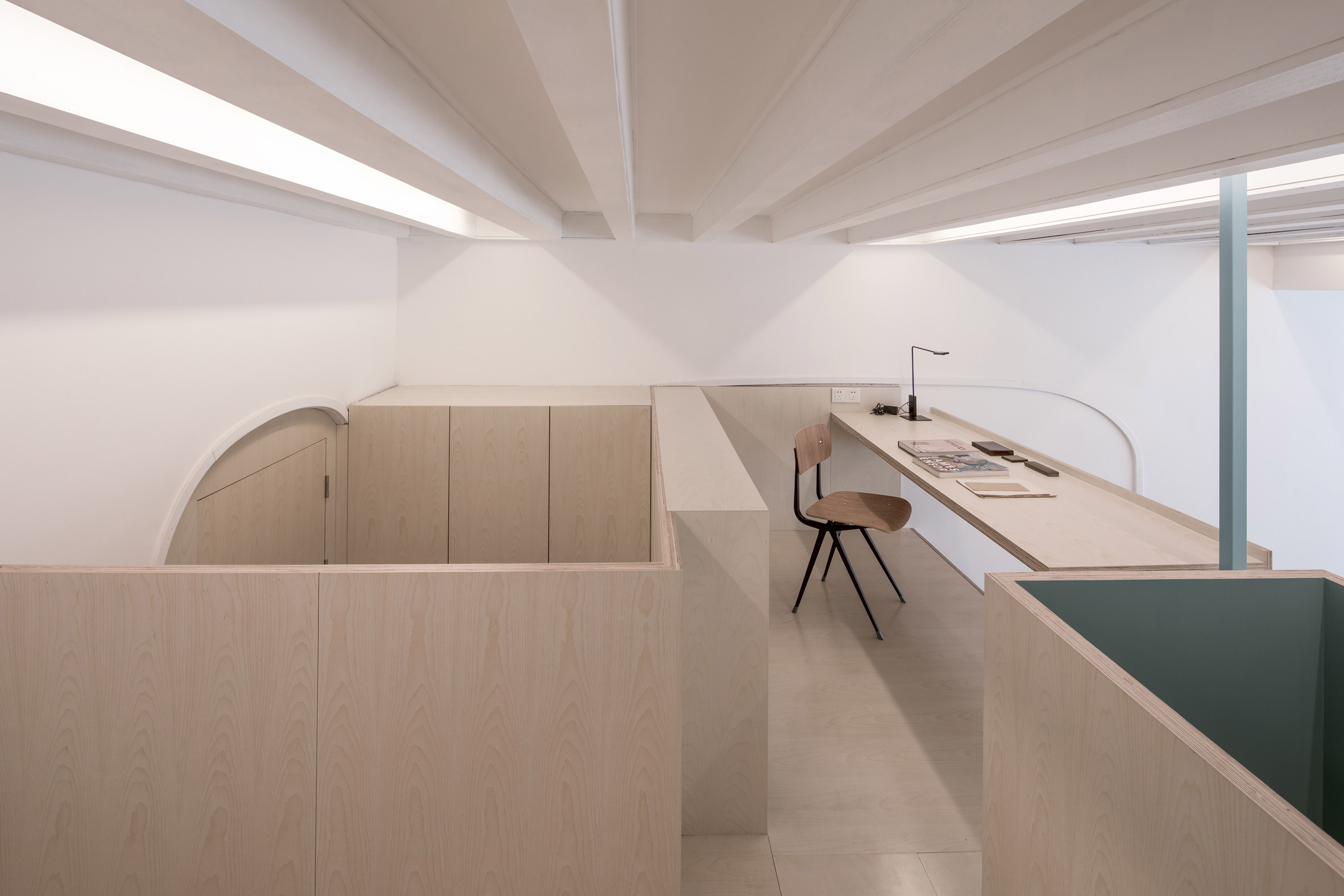 Upstairs can be reached in two ways – a blue wooden ladder goes up to the study, where a plywood desk extends from the wall. Another short flight of stairs that goes up above the kitchen leads to the bed, which cantilevers out over the kitchen on a plinth.

The nook of the bay window has been reserved for a sitting area where inhabitants can look through to the leafy back garden. Curved shelving installed directly underneath offers another spot to perch and read a book. 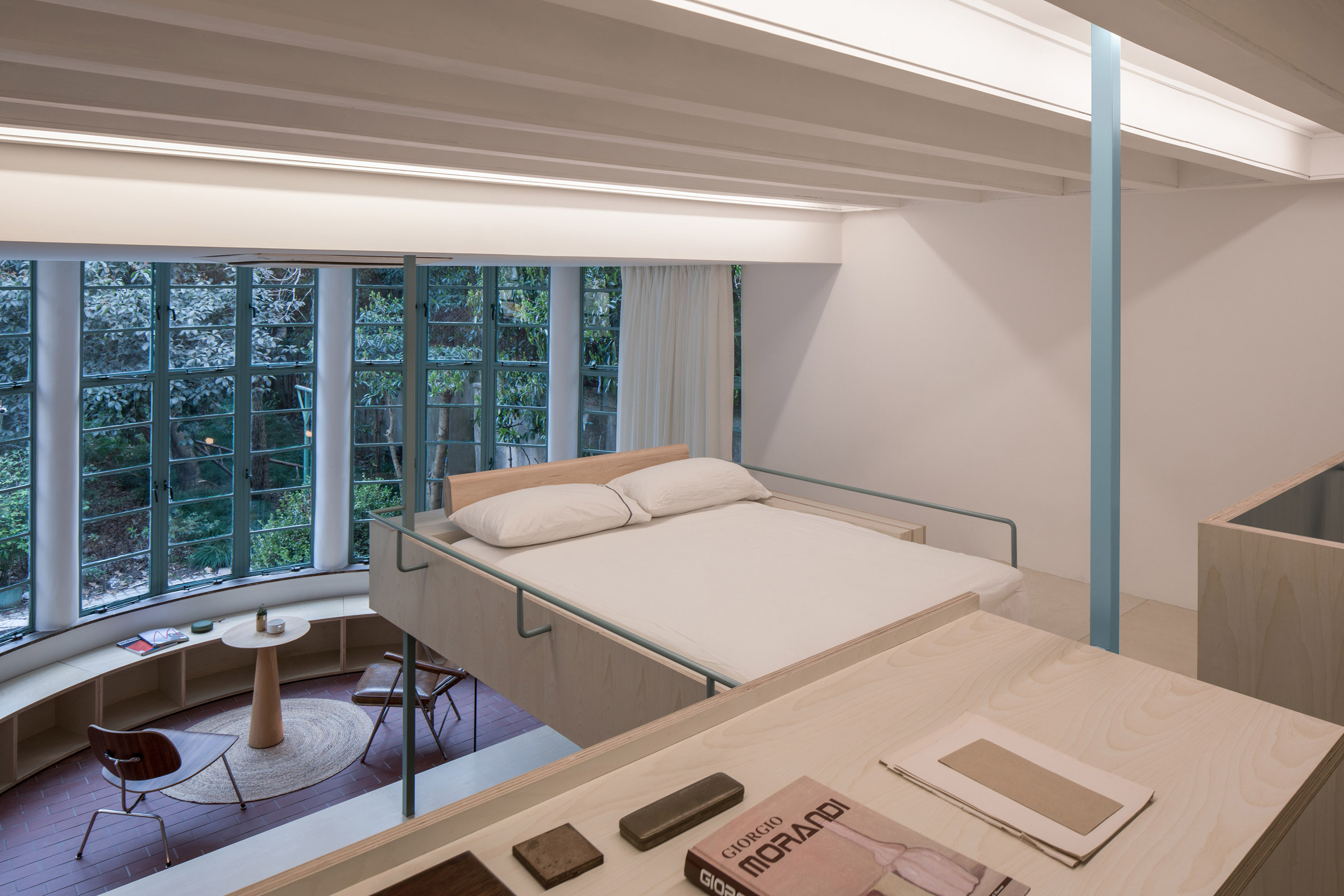 Despite being based in Beijing, Atelier Tao + C has completed a host of other properties in Shanghai. This includes a book-lined apartment, which features floor-to-ceiling smoked oak shelves, and a 1930s lane house, which has a narrow light shaft running through its centre.

Much like the studio, Project Praga constructed wooden volumes inside holiday apartments in Poland to contain storage and bathrooms facilities.

Photography is by Tian Fang Fang.