Berman Guedes Stretton sought to preserve and enhance the modernist designs of buildings at two University of Oxford colleges during renovations to improve their interior layout. 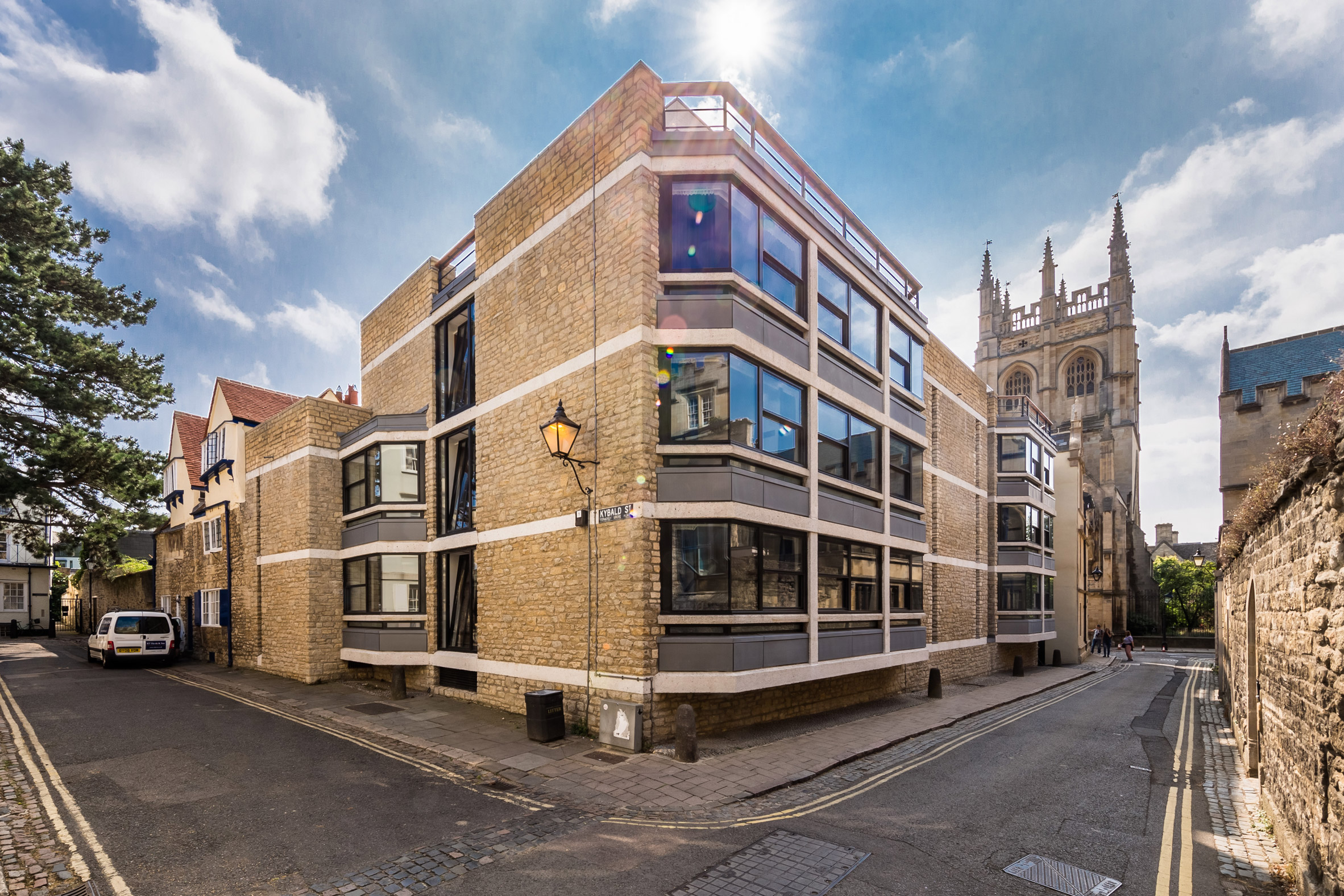 The Oxford- and London-based firm was invited to oversee the renovation of a building designed in 1969 by Powell & Moya, a firm best known for its Skylon tensegrity structure at the 1951 Festival of Britain.

The refurbishment focused on retaining the character of the residential building at the university’s Corpus Christi College, which features stone walls intersected by crisp concrete elements and large glazed surfaces. 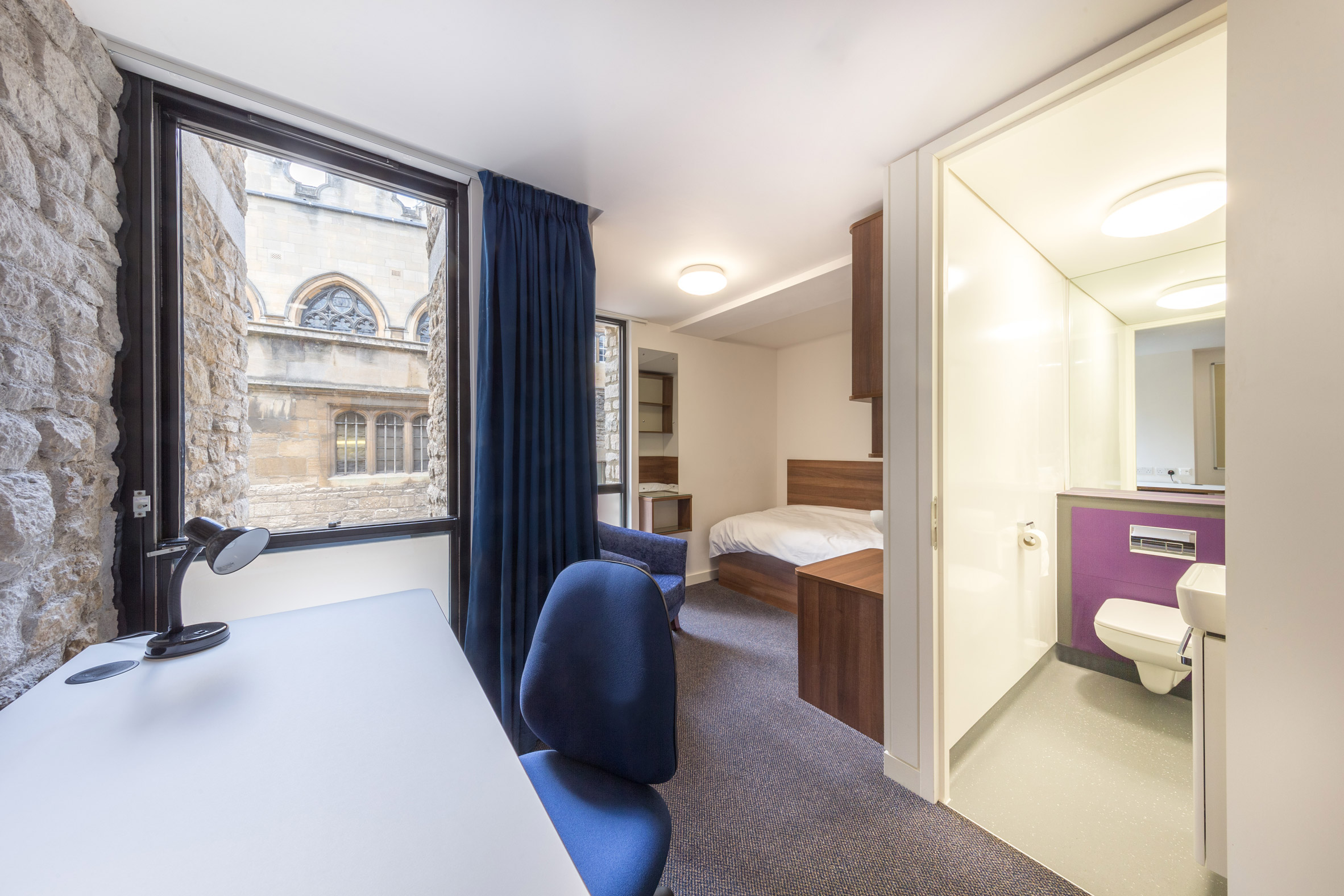 “Powell & Moya, winners of the RIBA Gold Medal in 1974 are one of the 20th century’s most significant post-war practices and it is right that their buildings should be preserved for future generations,” said the practice’s managing director Gary Collins. 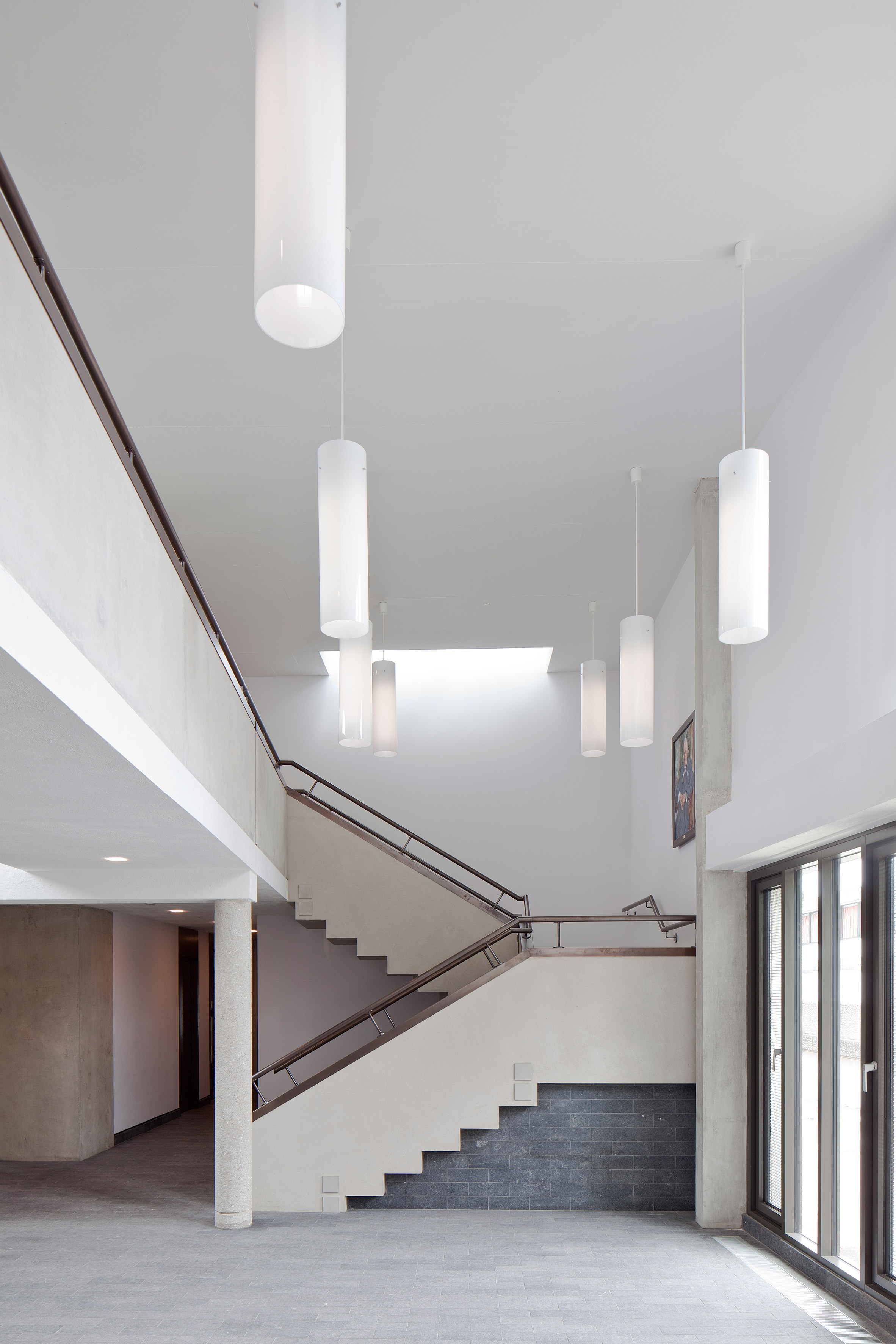 The university has previously engaged Berman Guedes Stretton (BGS) to oversee other renovation projects and Collins said the institution is as dedicated to maintaining its modern architectural history as it is the older college buildings. 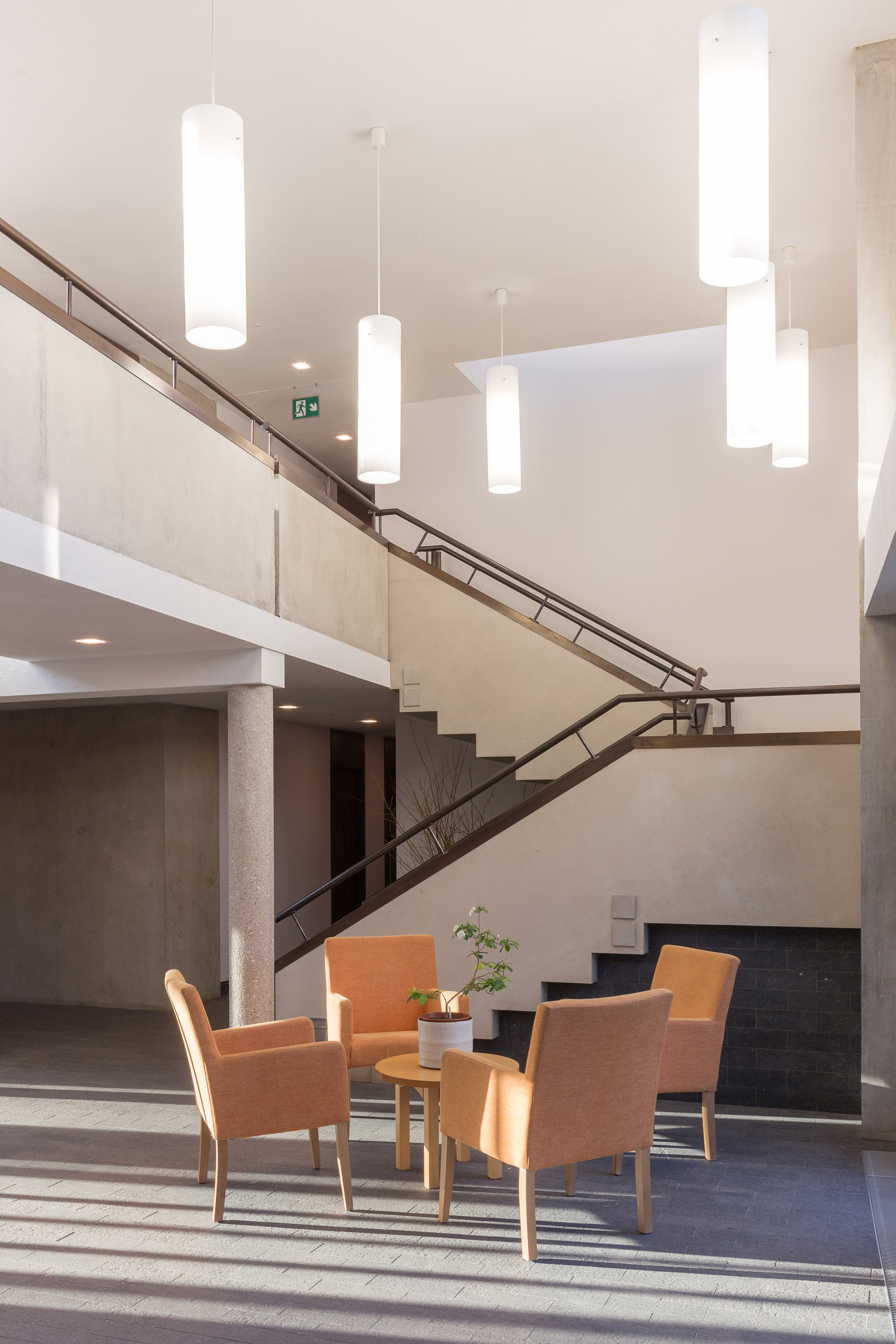 “BGS has refurbished and extended buildings in Oxford that date from the 1600s to the 1990s, and each throws up different challenges,” he said.

“We are very fortunate to be engaged with history in this way and often to be responsible for creating contemporary additions adding a new chapter to the building’s history.” 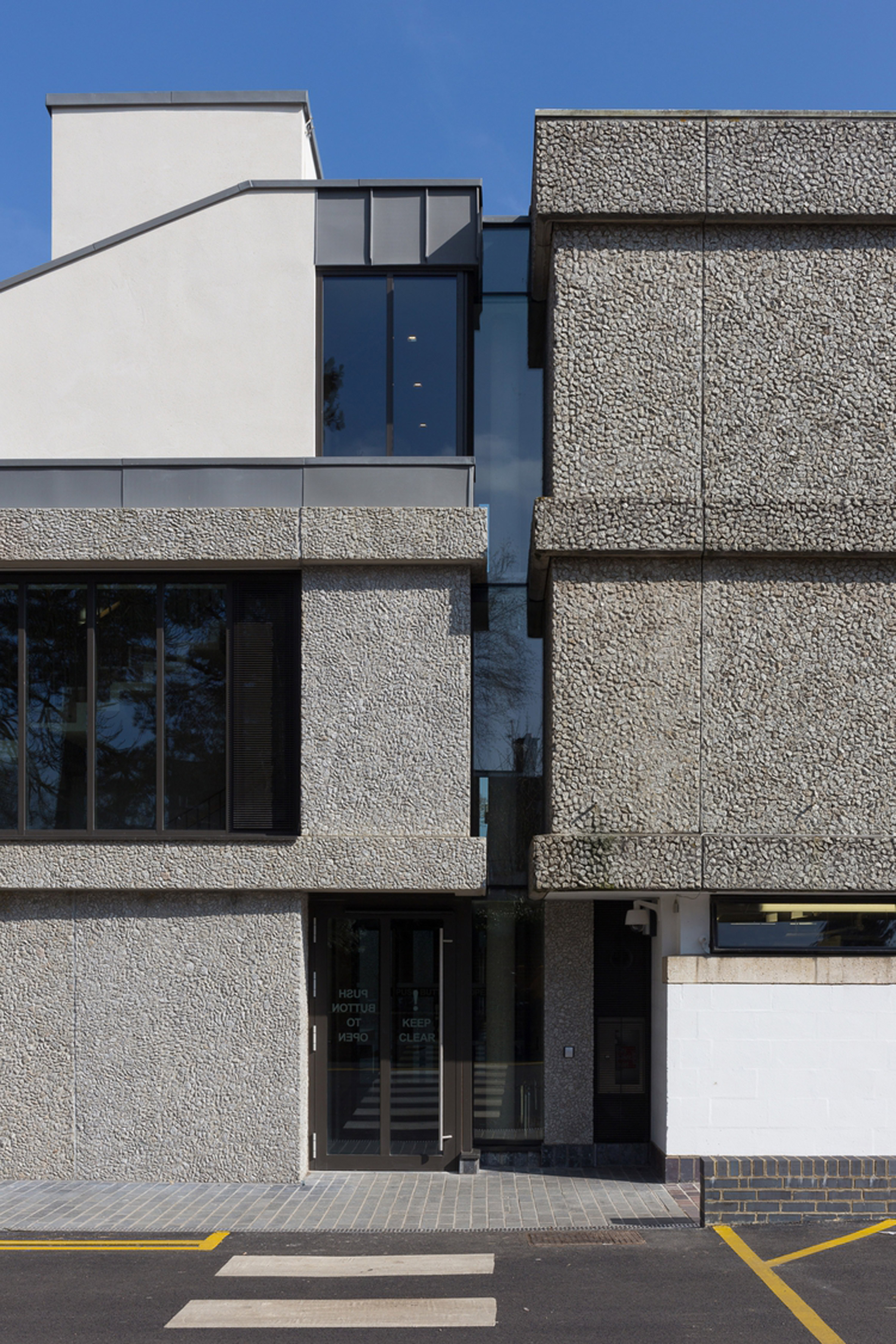 Improvements to the Corpus Christi building include the reconfiguration of the interior to incorporate en-suite shower rooms in most rooms, and the addition of three rooms on the top floor.

The introduction of double glazing and attempts to address insulation issues caused by thermal bridges inherent in the existing structure helped to enhance the indoor climate and energy consumption. 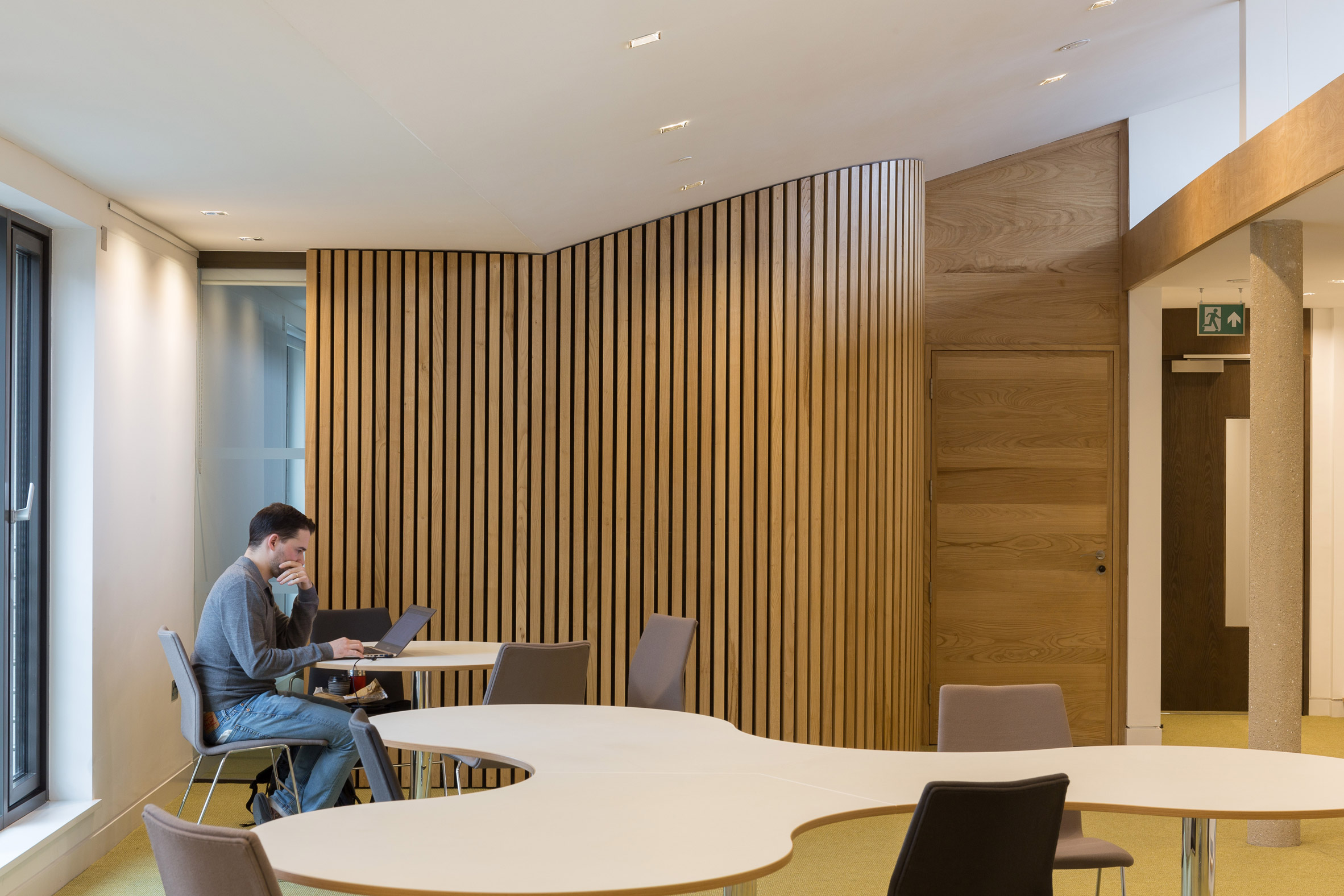 A previously unused concrete area in front of the building’s entrance has been transformed into a paved communal garden incorporating a small amphitheatre.

Now known as the Hugh Oldham Building, the annex is connected by a glazed corridor to the adjacent Grade I-listed Jackson Building, which was also refurbished as part of the project. 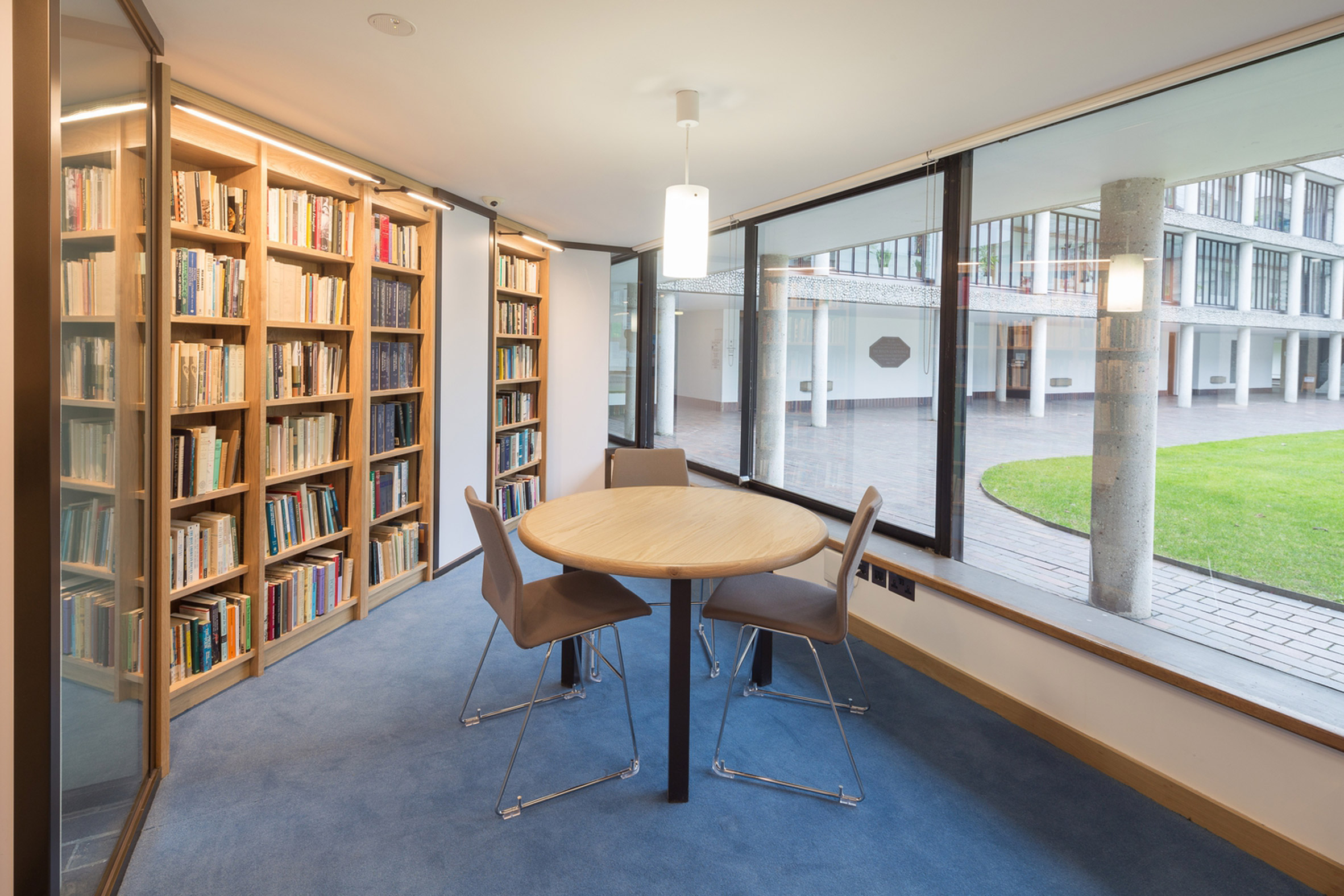 Berman Guedes Stretton also recently finished the latest phase of improvement works at Wolfson College, which was completed in 1974 and is Powell & Moya’s best known work in Oxford.

In 2013, the firm added an auditorium, porter’s lodge, seminar rooms and offices to what is one of Oxford’s largest postgraduate colleges. 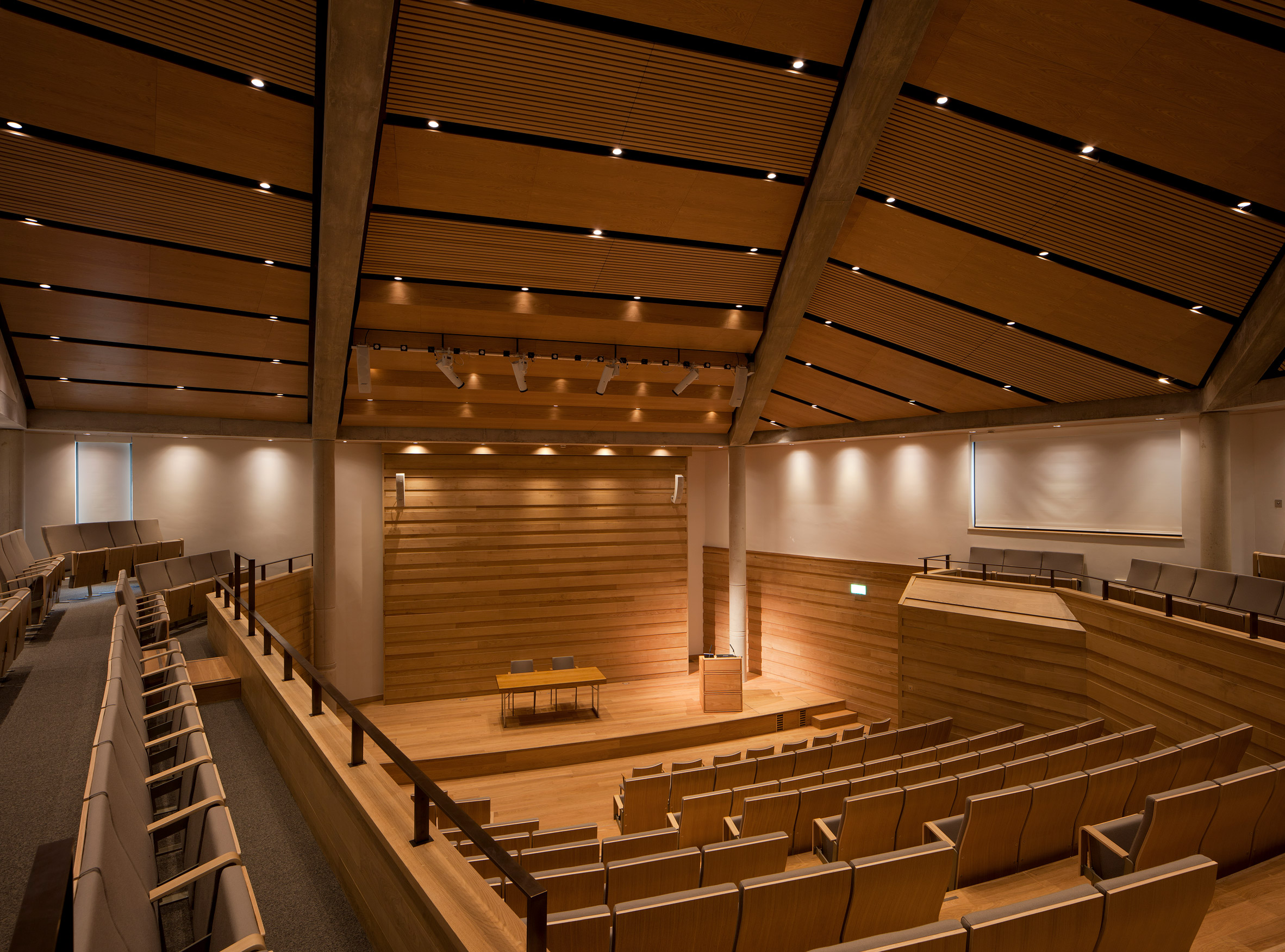 The firm’s latest project involved extending the main library at ground and first floor, as well as adding a space for group working, a media room, academic offices and a cafe.

“Our approach to the new academic wing follows college founder Isaiah Berlin’s brief for the original buildings, which was clear lines of simple geometry and a gentle curve,” said the architects. 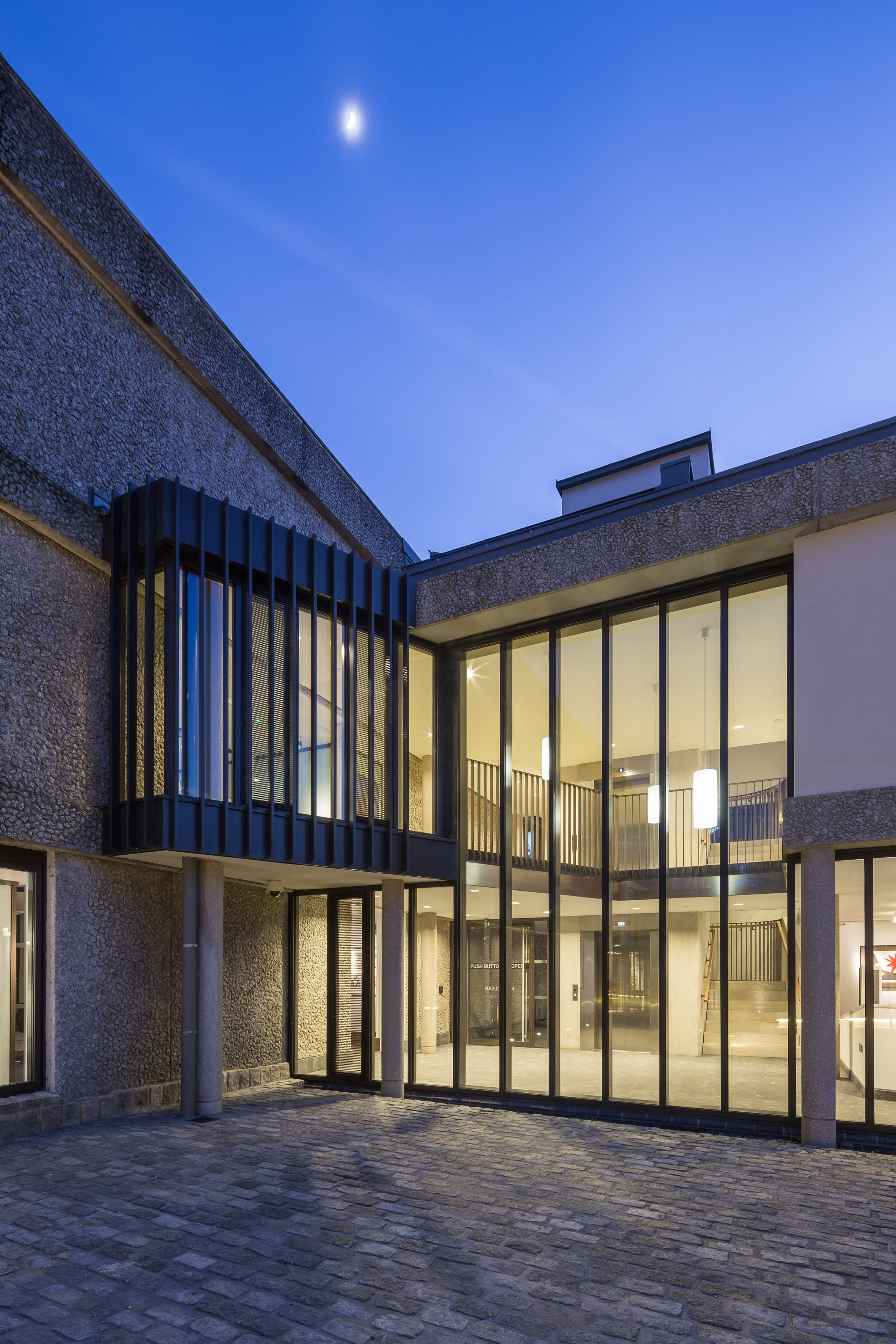 The curved facade of the extension flanks a newly created quad that is typical of Oxford colleges and is overlooked by an existing building as well as by the new reception.

The landscaping of the quad was key to the project. It combines existing granite setts with Irish limestone and precast concrete benches that provide a space to sit outside next to the cafe. 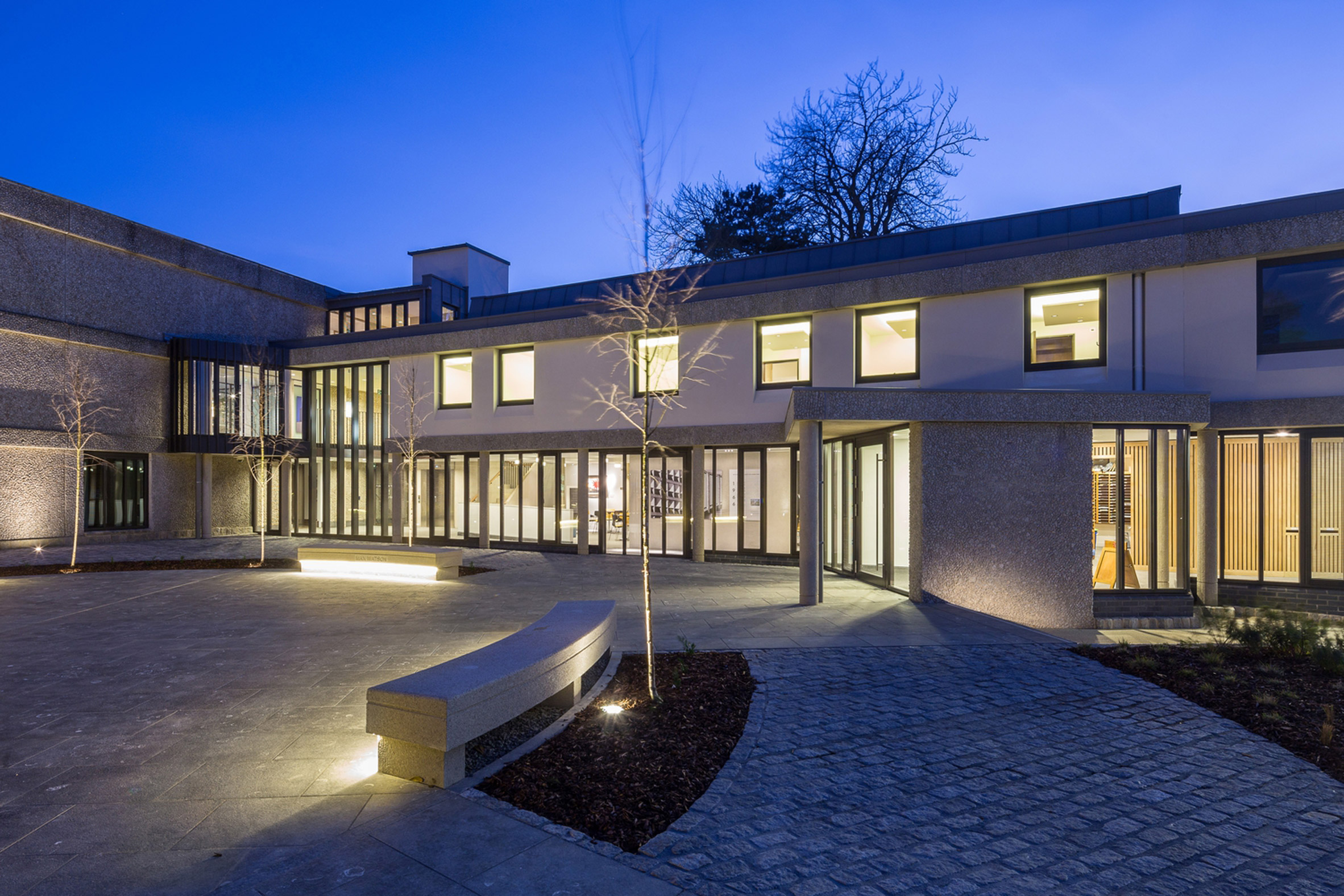 In 2014, another Powell & Moya project, the revered Chichester Festival Theatre in southern England, was given a major facelift by London studio Haworth Tompkins.

Like Berman Guedes Stretton, the studio was tasked with modernising and restoring the 1960s building to preserve and adapt it for future generations. 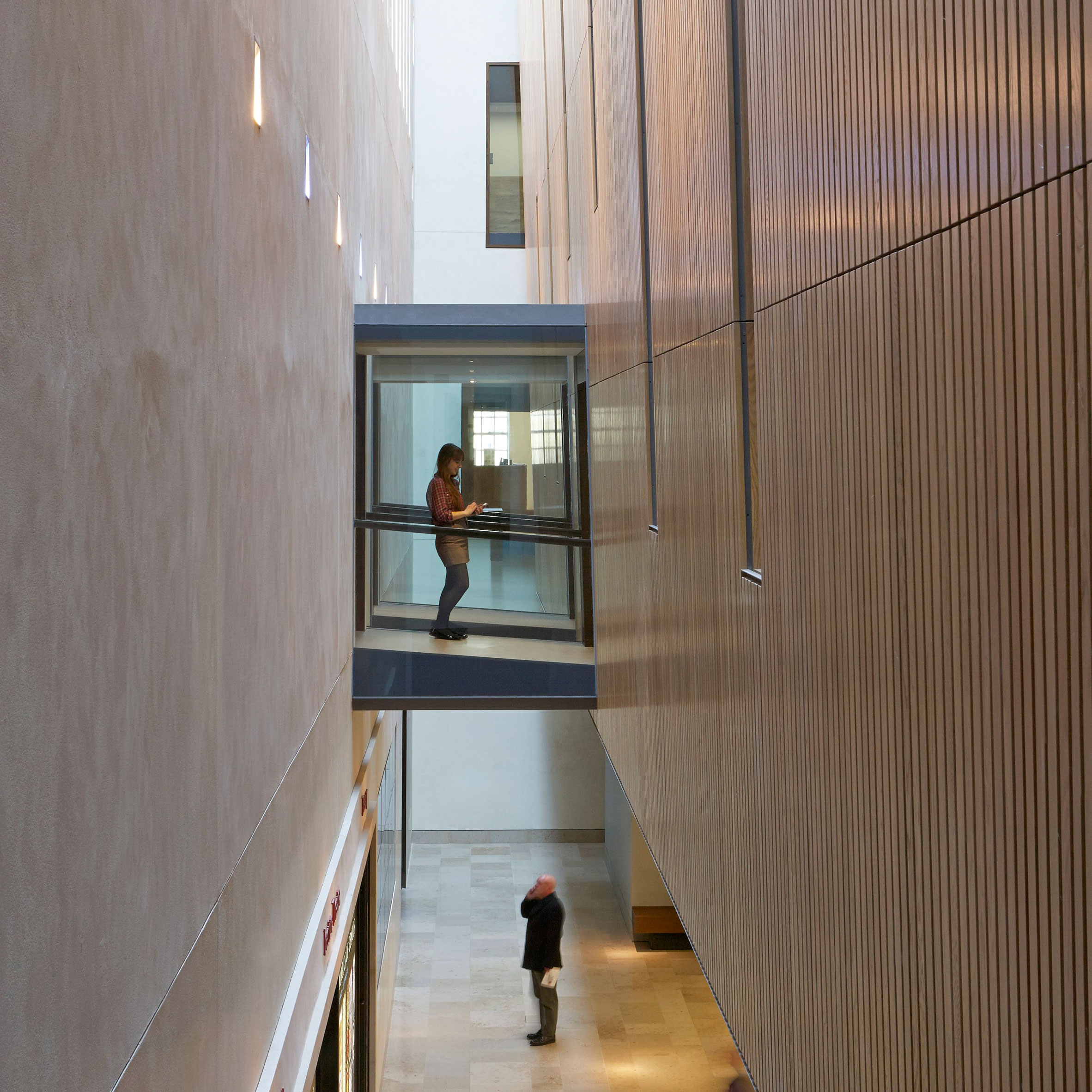