Exposed fresco and original arched doorways are paired with brass accents and grey cabinetry at this apartment in Vilnius, which has been overhauled by interior designer Kristina Lastauskaitė-Pundė. 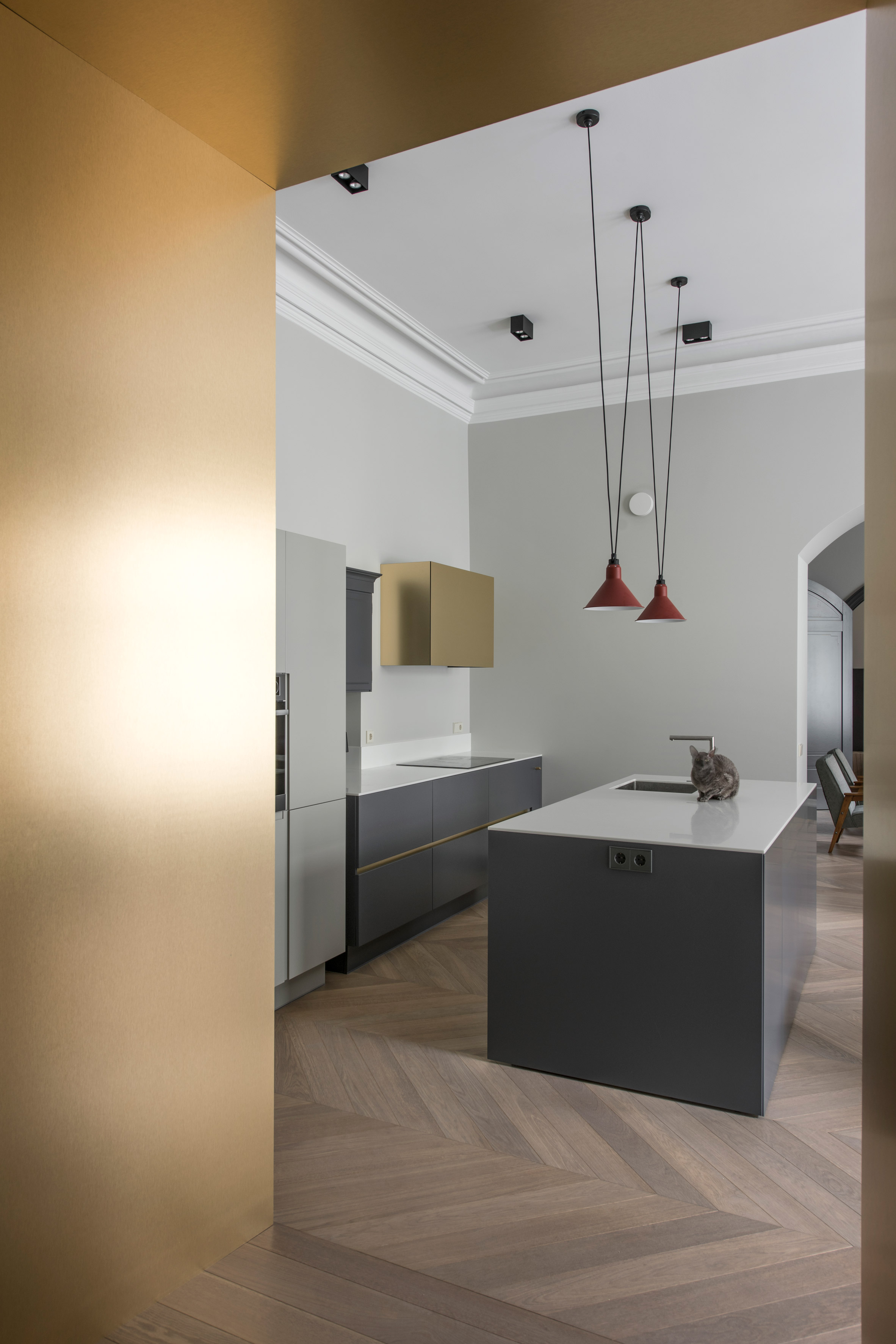 Apartment Vilnius belongs to a family with two children, who approached local designer Kristina Lastauskaitė-Pundė to give the home a contemporary update that maintained its historic features.

The apartment, which is set within a 19th-century residential building in the Lithuanian capital’s old town, first had to undergo extensive reconstruction works. Builders were told to leave behind the series of arched openings that run throughout the space. 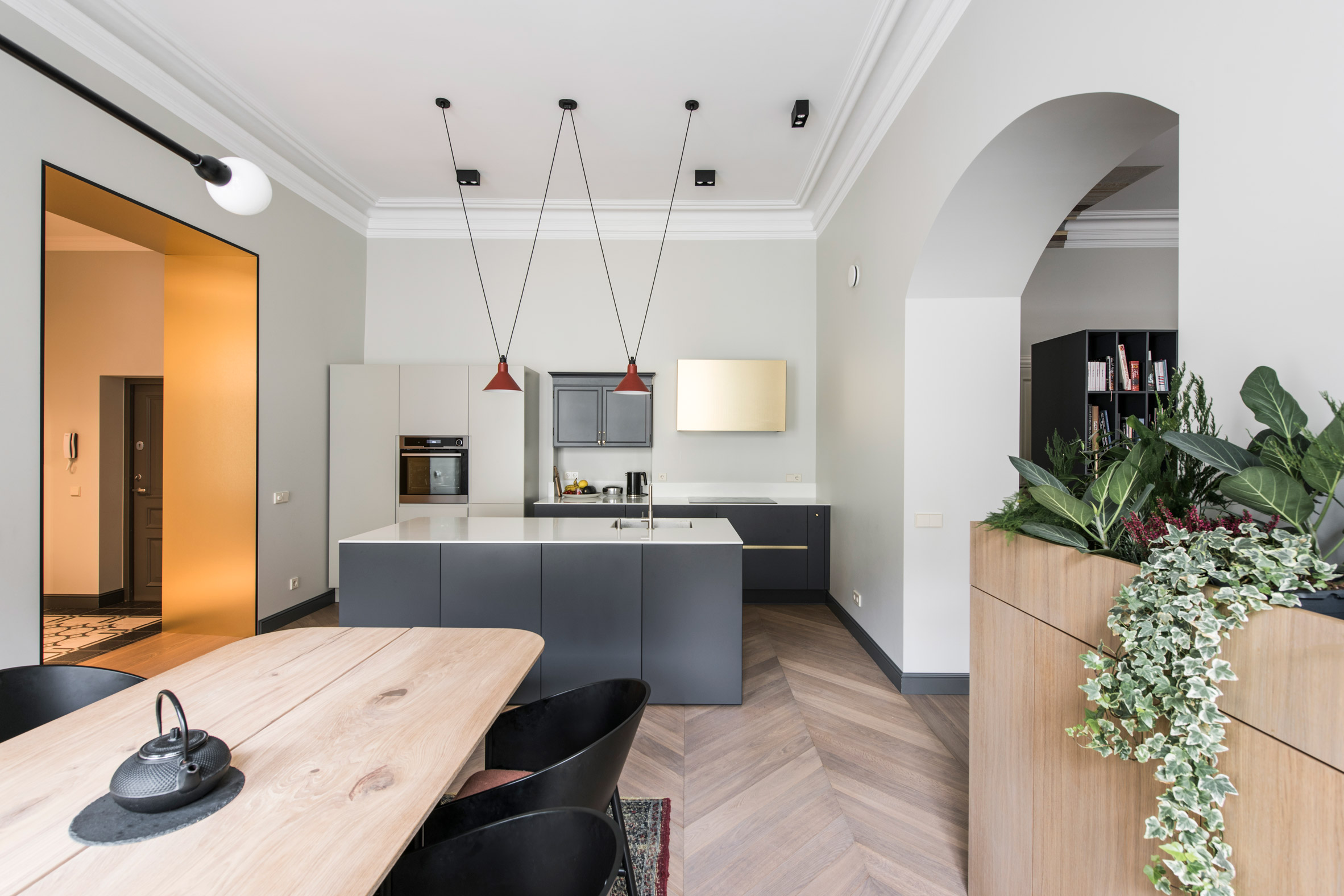 “When working on the interior, it was important to preserve the apartment’s beautiful old heritage and adapt it to modern, comfortable living,” Lastauskaitė-Pundė told Dezeen. 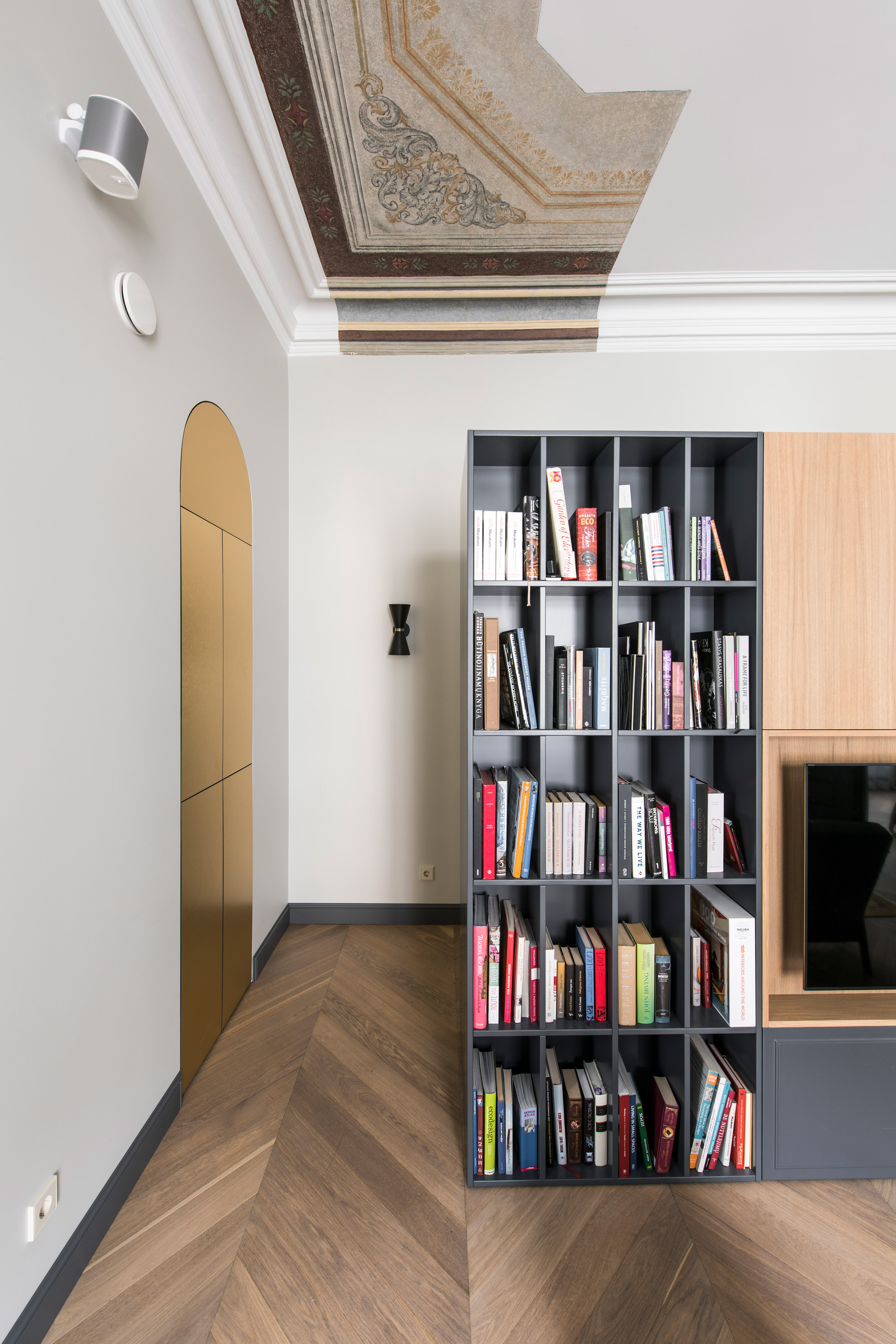 The designer also decided to keep fragments of fresco from the apartment’s old ceiling, which appear in the living area and master bedroom – areas that were unsalvageable have been painted over in white.

The rest of the apartment follows a largely muted colour scheme. Walls have been completed in a shade of pale grey with furnishings to match, and paired with smoked-oak parquet floors. 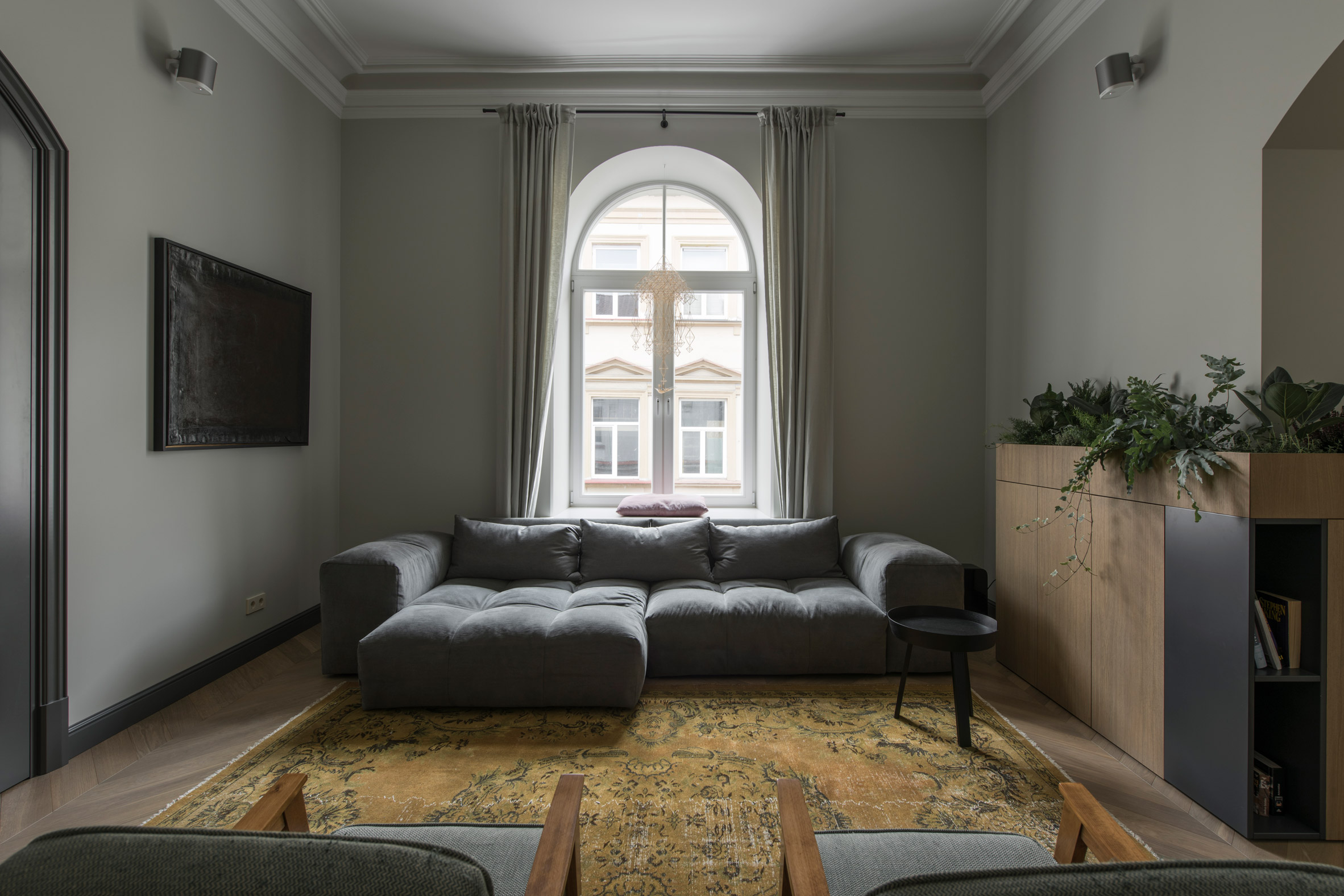 To provide touches of colour, the designer has applied gold-hued sheets of brass to the home’s entrance doorway and a singular kitchen cupboard. The material has then been used to create a decorative arch on one of the lounge’s walls, echoing the shape of the openings.

Several ornately patterned rugs have also been used for decoration. 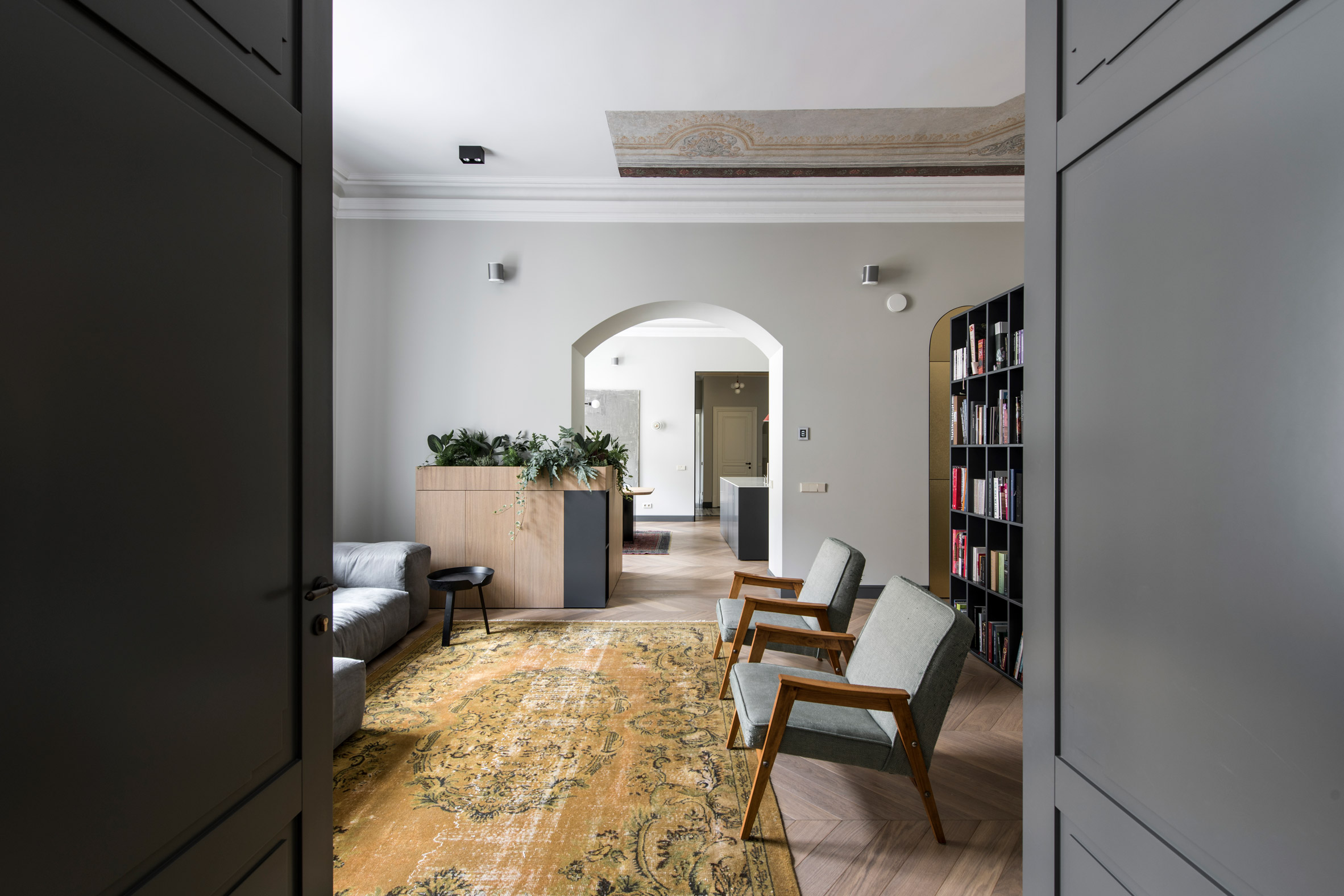 “The interior is built on the principle of contrast, the mix of old and modern styles,” Lastauskaitė-Pundė explained.

“The colour and material palette echoes this old-new contrast – there are time-tested materials such as oak, and gold elements that represent nowadays and slightly refresh [the apartment].” 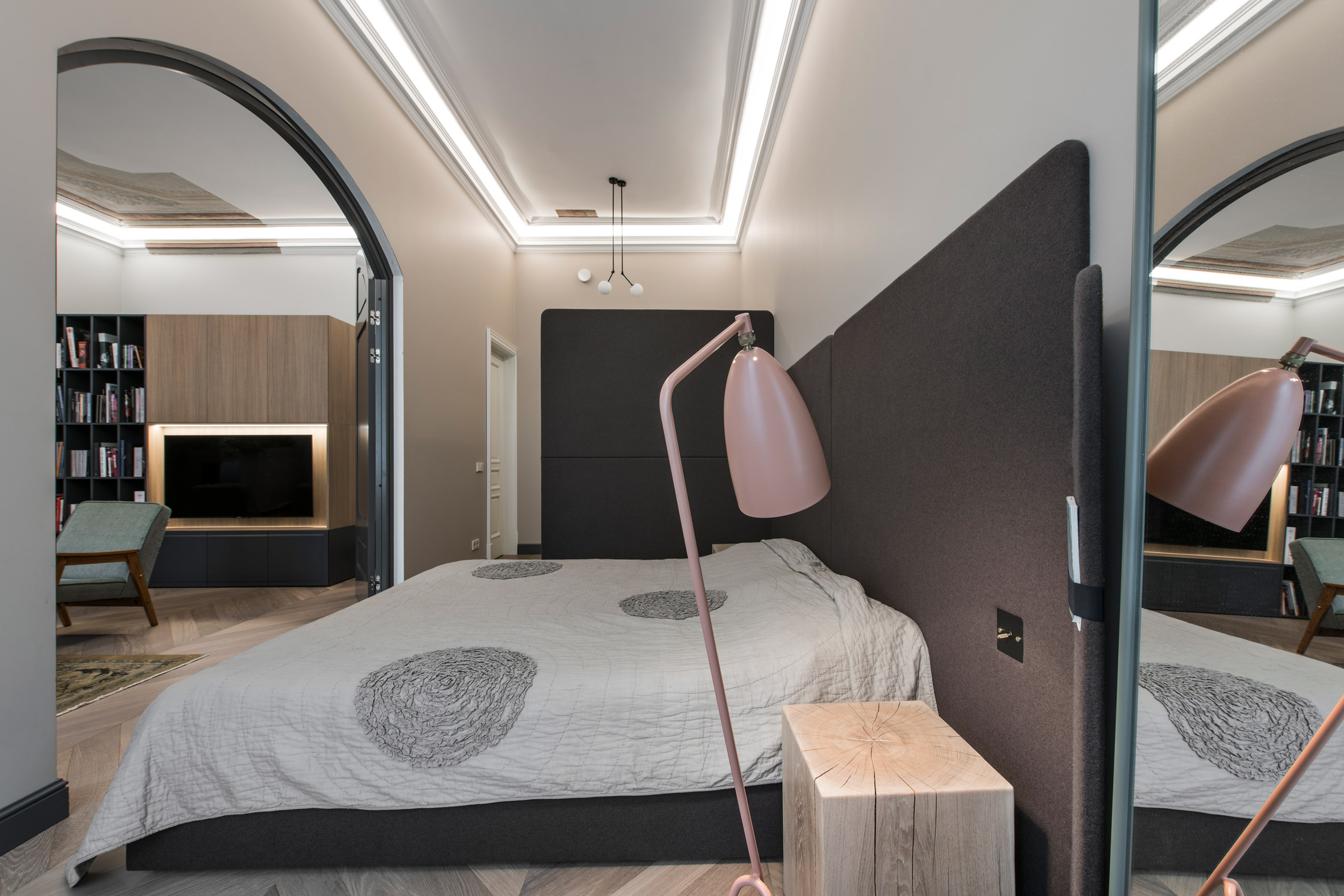 A large storage unit has also been inserted into the lounge to give the family extra room for their belongings. Another wooden cabinet wraps around an adjacent wall, topped by a planter overflowing with greenery.

Interior design studio AKTA has also used a muted colour palette in the redesign of a Vilnius apartment, offsetting its grey walls with blue velvet furnishings and teal-coloured cabinetry.

Photography is by Leonas Garbačauskas.