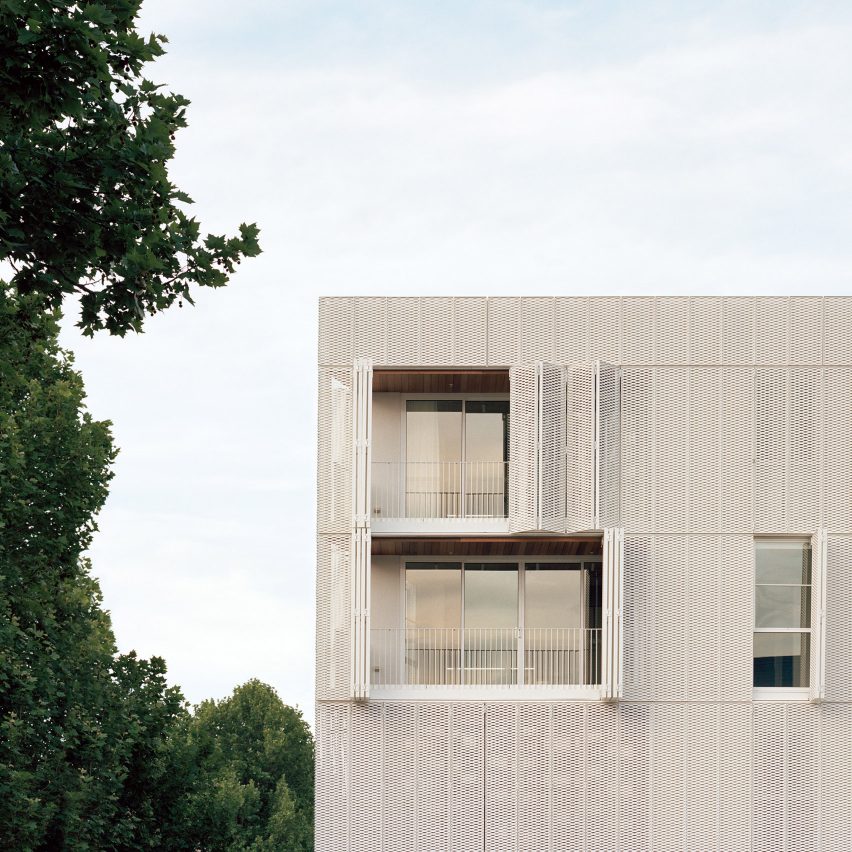 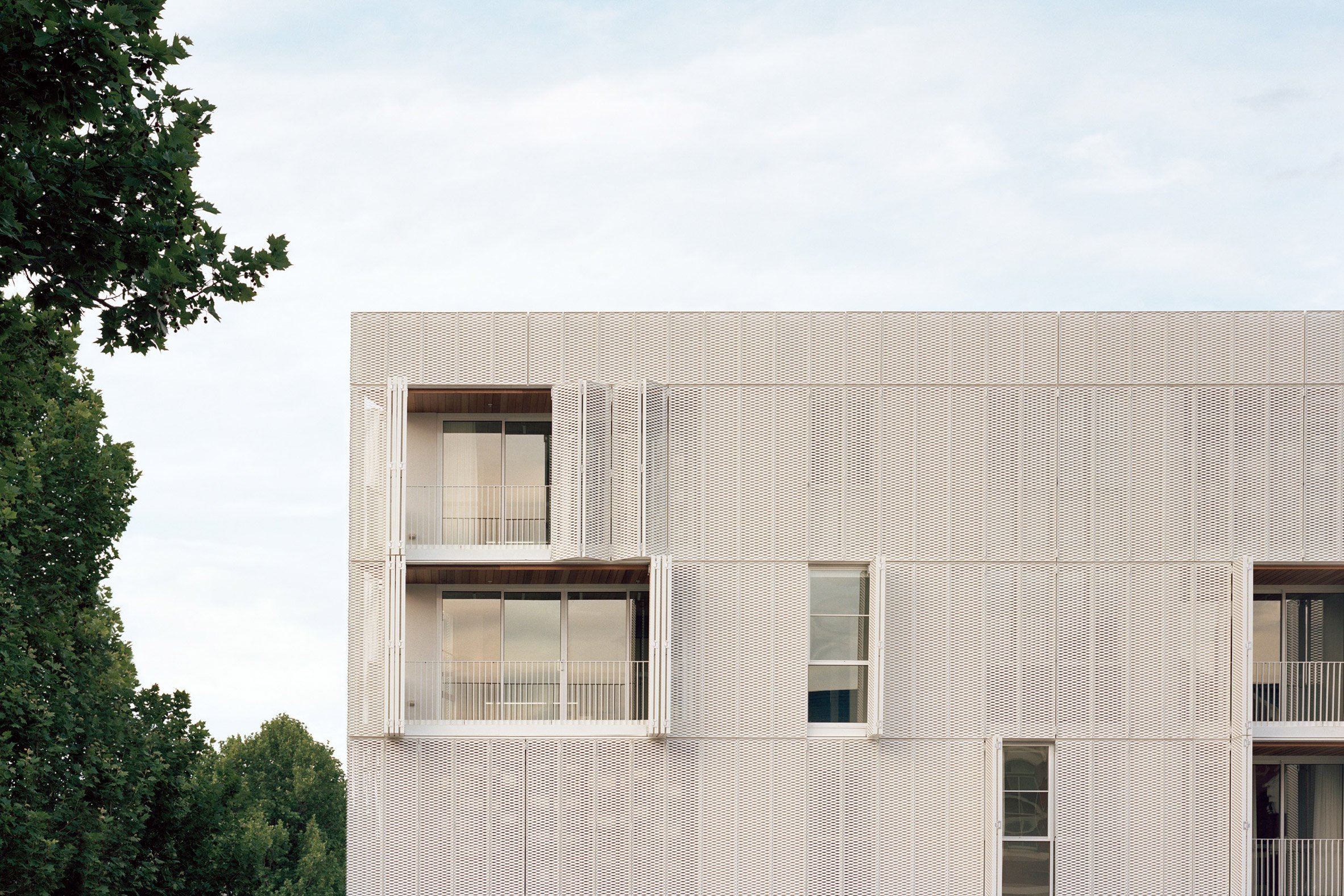 Designed to be “spacious, breathable and community-focused”, the apartment block is cloaked in a veil of expanded metal mesh. It has integrated operable shutters, which allow parts of the building’s facade to open and close throughout the day in accordance with the weather and seasons. 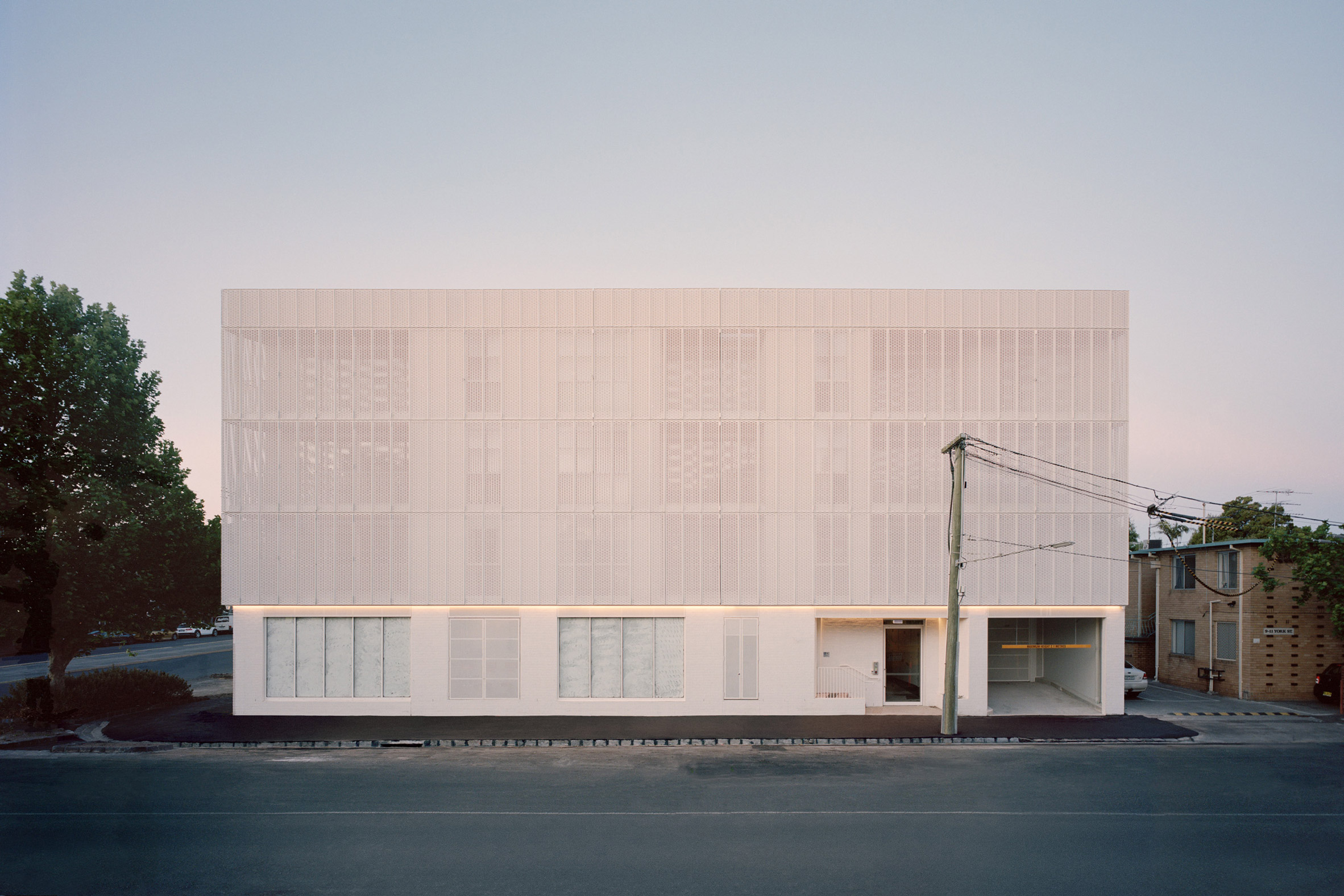 At night the mesh creates a warm filtered glow from within, which the architect likens to candlelight. 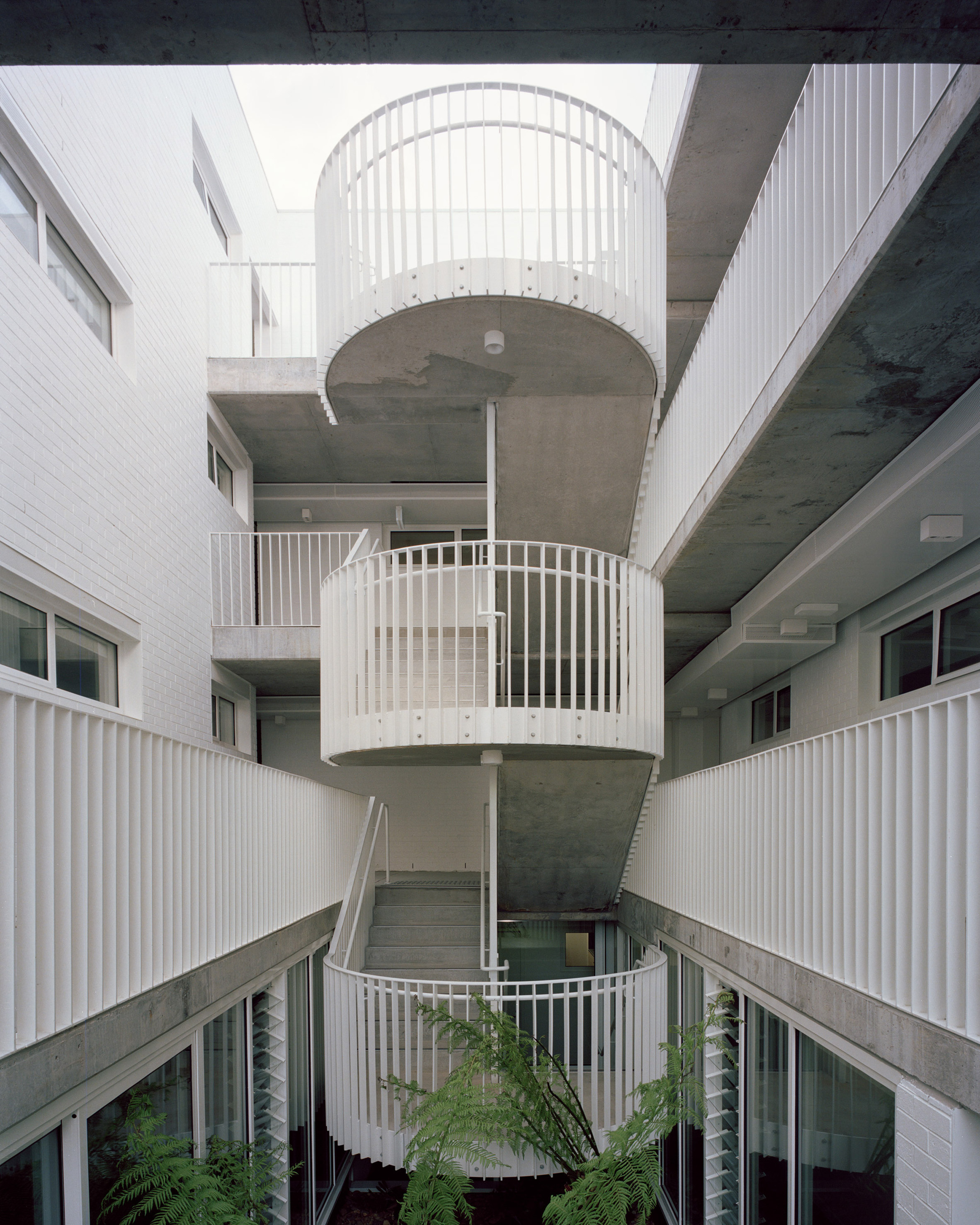 A central open-air atrium connects the apartments with shared walkways and greenery-filled communal areas, which are intended to provide opportunities for social interaction and foster well-being. The atrium also provides further cross flow ventilation and creates a sense of permeability within the block.

Inside the apartments, this sense of space is enhanced by 2.8 metre-high exposed concrete ceilings. 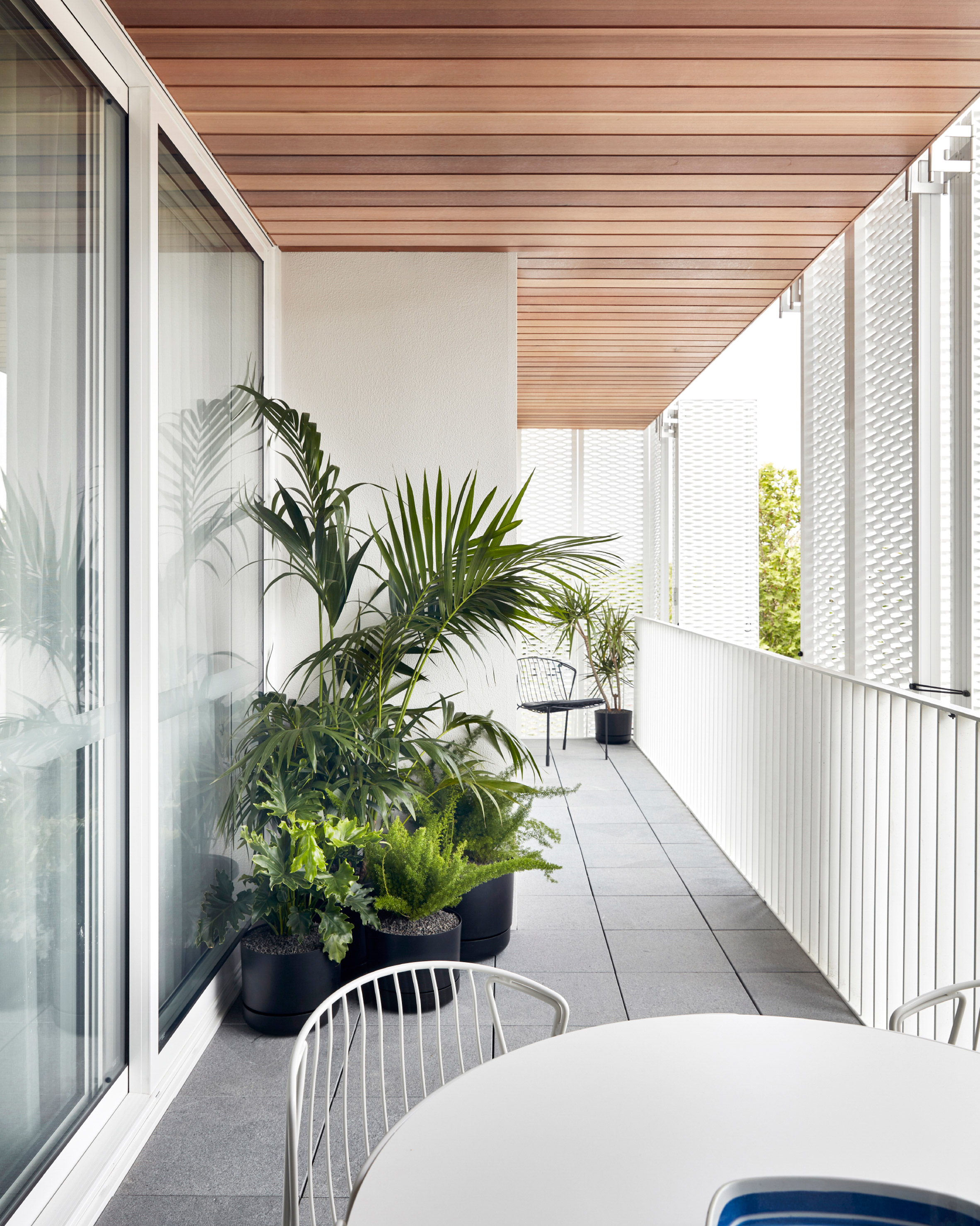 “Architecture should be agile and enduring,” said Hannah Jonasson, co-director of Fieldwork, which is based nearby in the neighbourhood of Collingwood.

“As designers, we’re sensitive to the evolving needs of its inhabitants. We believe architecture is a sensitive, spatial practice from which the entirety of life unfolds.”

Last year, local interior designers Flack Studio was invited to furnish one of the show apartment interiors, which was opened to the public last year alongside another show apartment with interiors by Fieldwork.

Both studios completed the respective interiors in their signature style, extending their vision through to the selection of furniture, art and objects.

David Flack, director of Flack Studio, told Dezeen that the studio took a maximalist approach to styling in order to create a lived-in feel while complementing the apartment’s architectural bones. Clever storage solutions were incorporated to maximise living space where possible.

“I wanted to show how far you could push apartment living,” Flack said. “People tend to focus on size and go for a pared-back aesthetic but this can actually make the space feel smaller. Our approach demonstrates apartment living that feels generous and warm.”

“We followed Fieldwork’s lead with a nod to the Japanese hallmarks of simplicity and function,” he continued.

“For example, in the entranceway, we incorporated a space-saving dowel system for easy storage of bags, hats, umbrellas and everyday items.”

He added that the apartment was designed with a mid-to-late 30s person in mind and so the furnishings needed to be within an affordable price range and not feel too precious.

Meanwhile, the apartment furnished by Fieldwork was filled with furniture and objects by Antipodean designers and makers such as the Arch armchair by New Zealand brand, Douglas & Bec, a bronze round table by Barbera Design and a Welcome Stranger artwork, printed onto a gold mylar emergency blanket by Eugenia Lim.

“Our aim was to create something that truly reflected our own personal design aesthetic – a space that we would happily live in ourselves,” Joachim Quino Holland, another co-director of Fieldwork, told Dezeen.

“Most of the pieces chosen were by designers and artists that we have a long-standing relationship with and collaborate with regularly.”

“It was also important that the space be filled with an abundance of greenery,” he added. “We decided to go with a more pared-back aesthetic, allowing each individual piece to stand out and speak for itself.”

Photography is by Rory Gardiner unless stated otherwise.