Chinese studio 0 Architecture has converted a traditional courtyard house in Beijing into an office with spaces divided up by screens made from thousands of bamboo poles. 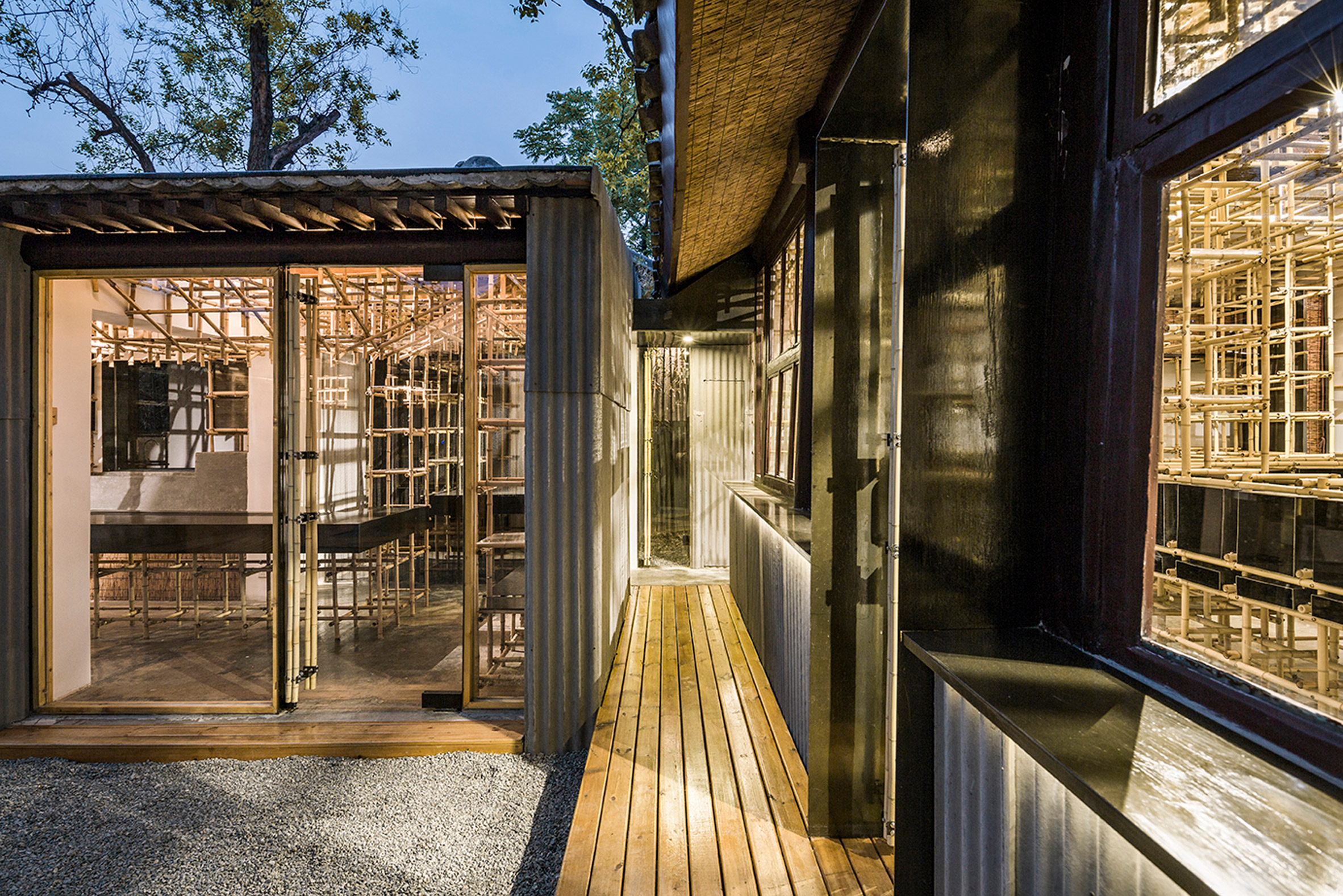 Located in the Chinese capital’s Xicheng District, the building is typical of the traditional Siheyuan properties found throughout this neighbourhood.

Siheyuan houses feature a series of connected buildings arranged around a central courtyard. The buildings contain living spaces and bedrooms, with the courtyard used for cooking and cleaning, as well as providing a communal area for the family. As with many of Beijing’s Siheyuan houses, this particular example had become dilapidated and was unfit for contemporary use due to the separation of the various internal spaces.

The project by 0 Architecture aimed to revitalise the building by retaining its timber structure while transforming it into an office that utilises internal spaces more efficiently. The studio now shares the office with an artist.

One of the key interventions is the introduction of a glazed passage connecting the buildings to the south and east of the central courtyard. The area to the south now houses the main office, with the eastern section containing a small conference room. 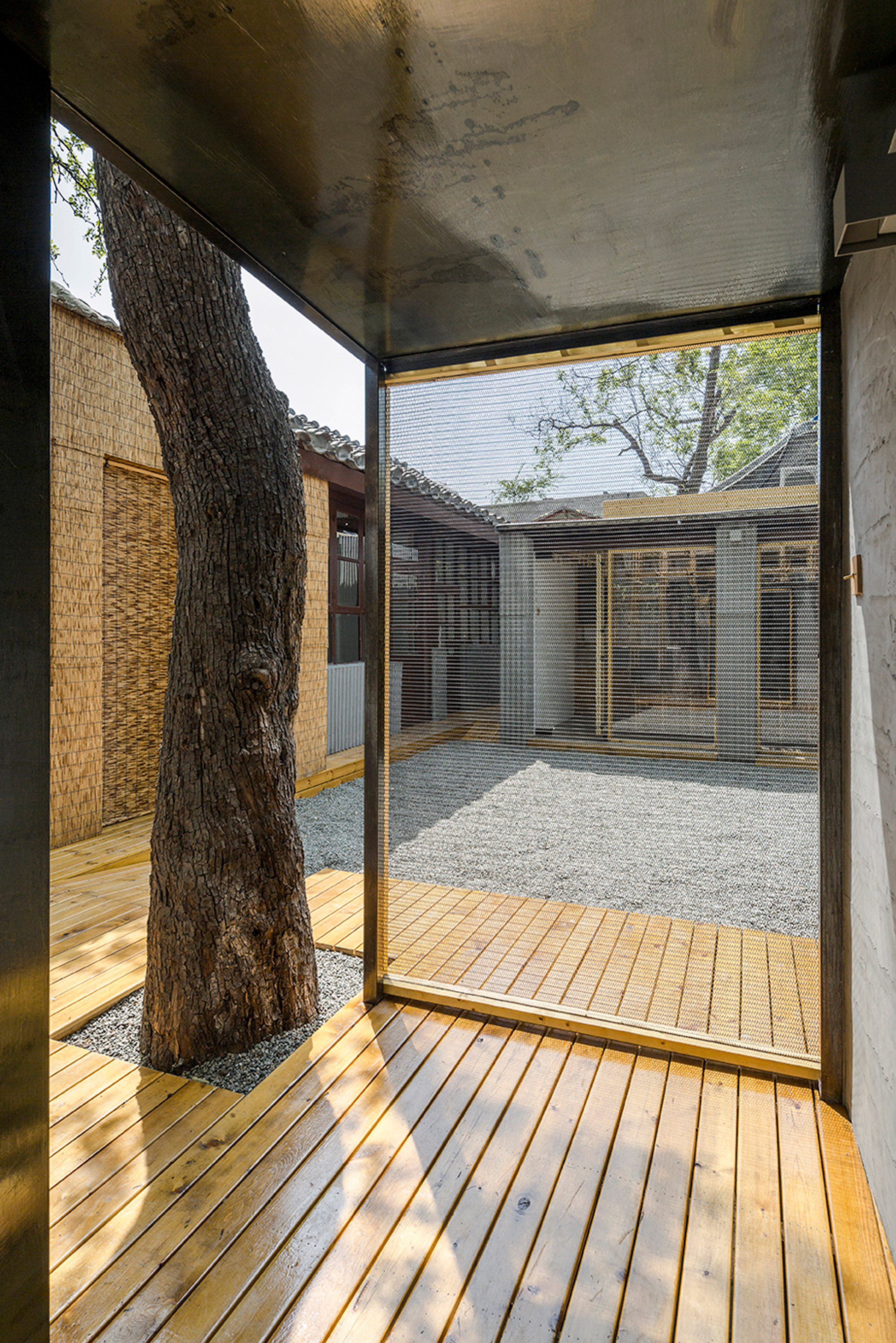 An additional courtyard created alongside the conference room provides improved natural light within this space, as well as an intimate space for relaxing.

A large skylight incorporated into the ceiling above the conference table enhances the connection with the outdoors by providing a view of the sky and one of three old jujube trees that occupy the site. 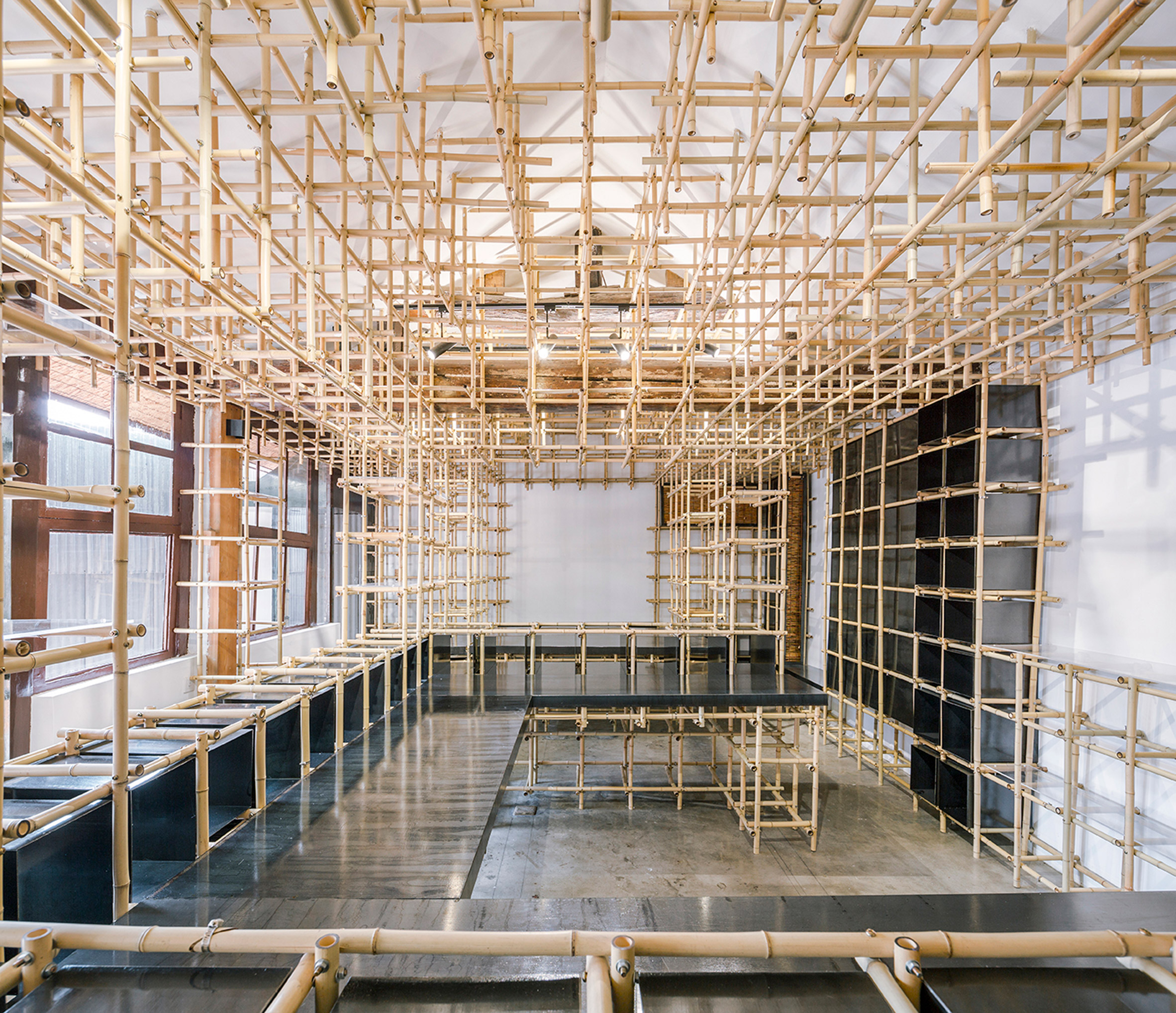 The layouts of the office and conference room are defined by a grid of bamboo poles that perform a dual role as part of the supporting structure and a way to integrate built-in furniture including desks and shelves.

“Our design preserves the wooden structure of the roof and the partition wall of the entire house is turned into a large L-shaped space,” explained 0 Architecture. 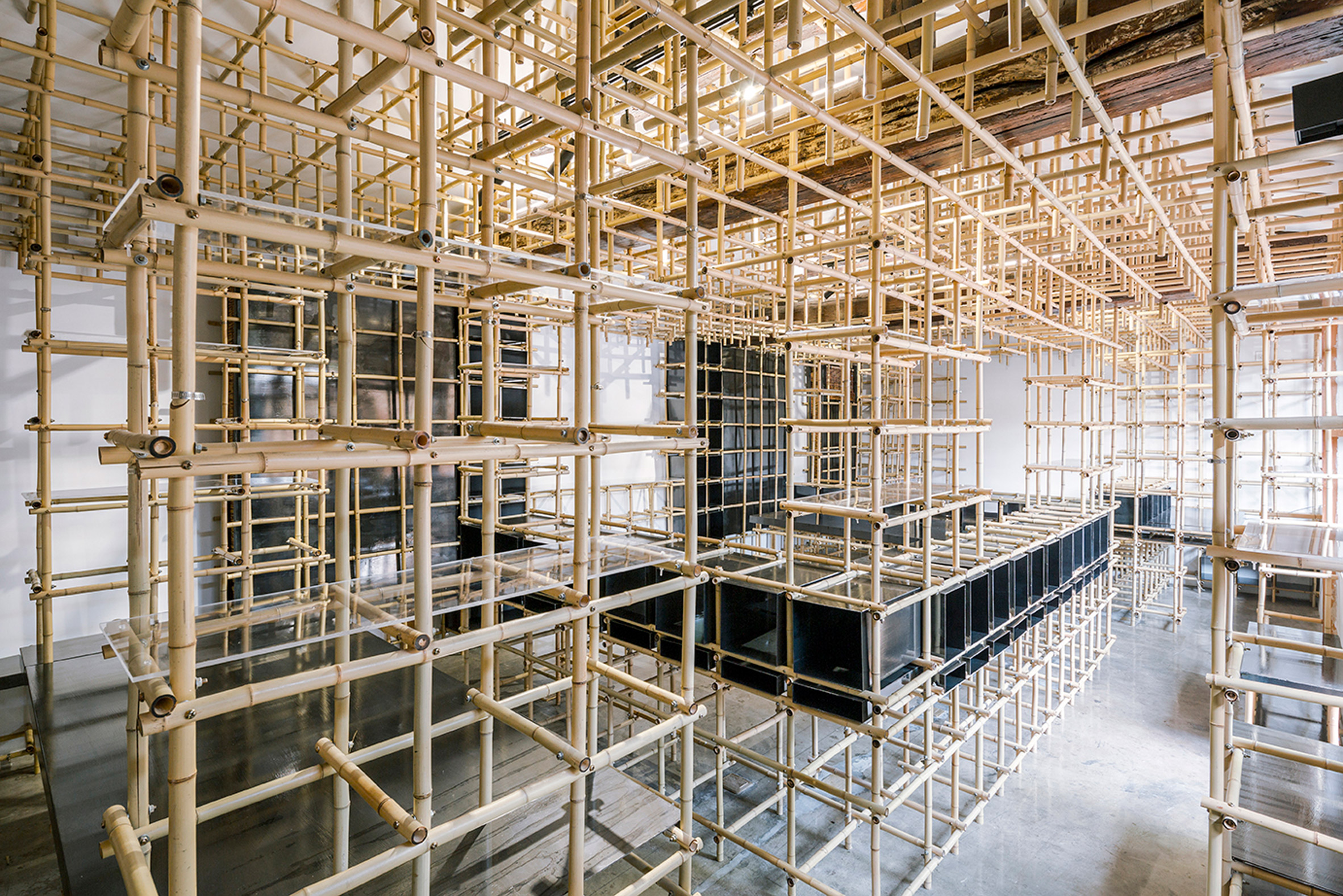 “The L-shaped block is divided into 10,000 small blocks,” the studio added. “Used space is then subtracted according to functions and people’s use habits, and the used space and small pieces of furniture parts are left.”

The bamboo lengths are fixed together using screws to create a grid of boxes, each measuring 28 square centimetres. 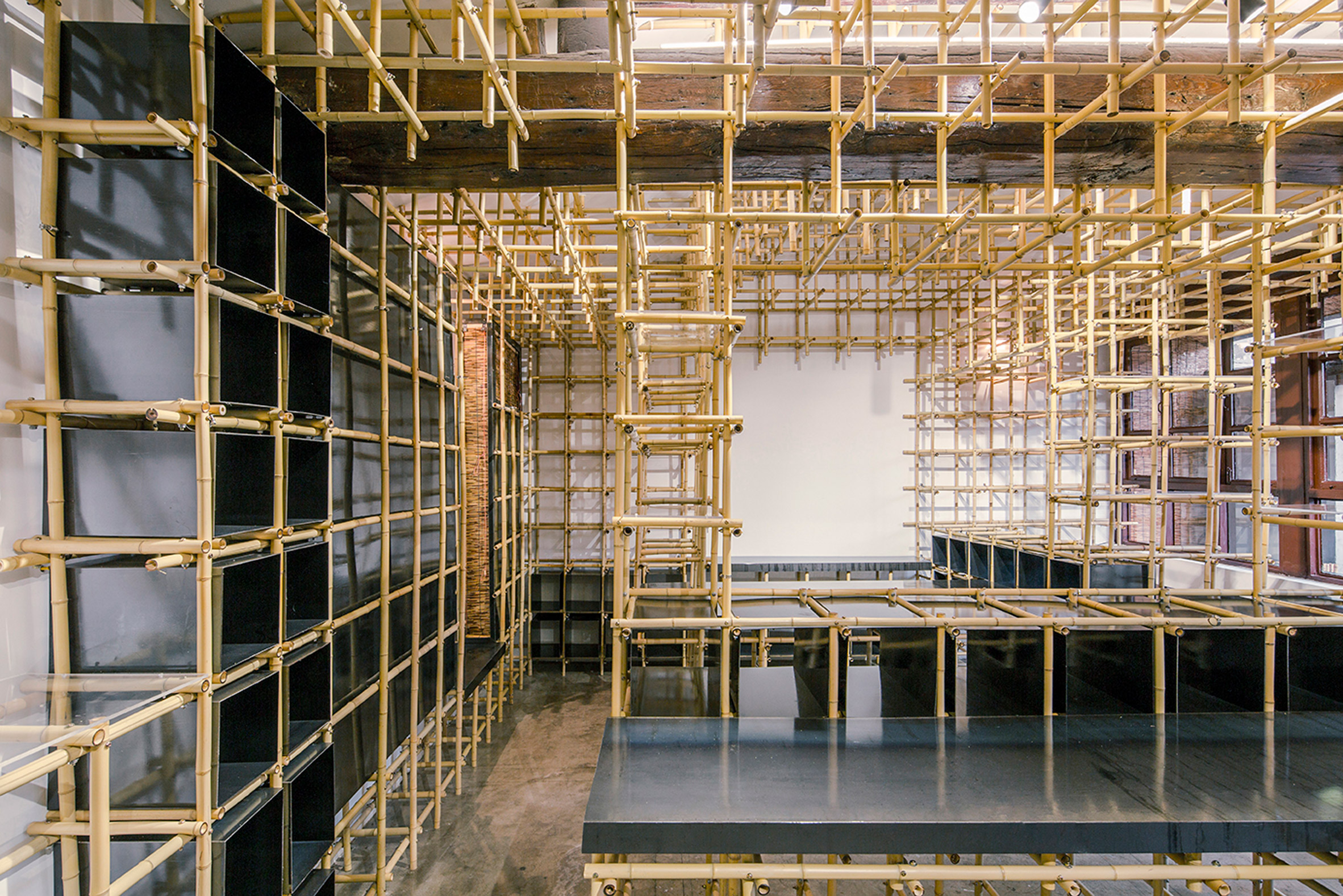 Materials including steel plates, wire curtains and glass panels are incorporated into the grid to create surfaces with different functions and varying levels of transparency.

A wooden deck now extends around the perimeter of the gravel-filled courtyard to connect the various rooms. Several of the spaces feature windows or sliding glass doors that can be opened to enhance their connection with the central communal area.

Photography is by Jin Wei Qi.