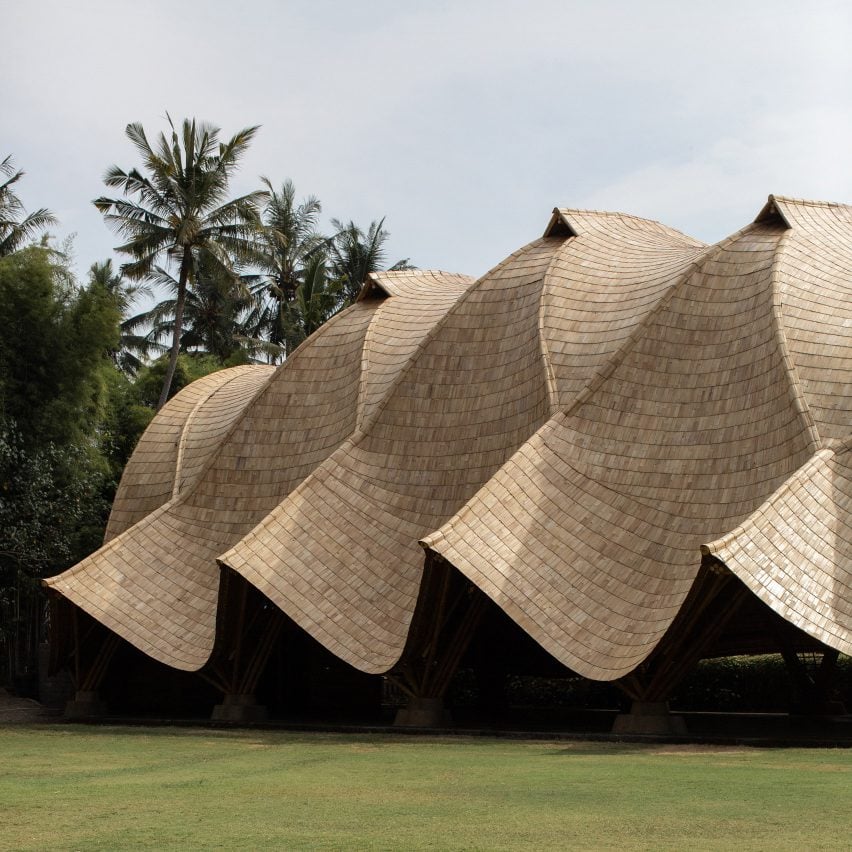 Architecture studio Ibuku has completed The Arc gymnasium for a private school in Bali featuring a complex double-curved roof made entirely from bamboo.

The Arc is the latest building to be completed on the site of the Green School – a private educational institution that promotes sustainability through learning in a natural environment.

The building was designed by Green School founders John and Cynthia Hardy’s daughter Elora Hardy and her studio Ibuku in collaboration with bamboo architect Jörg Stamm and structural engineering firm Atelier One.

It forms a protective roof sheltering a multipurpose sports court with a floor area of 760 square metres.

The lightweight structure features bamboo arches that support an organically shaped canopy. The 14-metre-high arches are connected by anticlastic gridshells that curve in two directions to create a robust, tensioned structure.

“Embarking on a design never before executed required some bravery and optimism. We were creative and stubborn enough to research and develop the answers needed for the success of the project.”

The building’s organic form and structural system were informed by natural systems, in particular the way our ribcages are held in place by the tension from an outer layer of muscle and skin.

“The Arc operates like the ribs of a mammal’s chest,” explained Stamm, “stabilised by tensile membranes analogous to tendons and muscles between ribs.”

“In The Arc, bamboo splits transfer forces from arch to arch.”

Several months of research and development led to the creation of a precise geometrical solution that allowed the structure to enclose a large inner volume with a minimal amount of material.

“The gridshells use shape stiffness to form the roof enclosure and provide buckling resistance to the parabolic arches,” said Atelier One director, Neil Thomas.

“The two systems together create a unique and highly efficient structure,” he added, “able to flex under load allowing the structure to redistribute weight, easing localised forces on the arches.”

The arches supporting the pavilion’s roof span 19 metres and allow for a large floor area that is uninterrupted by supporting columns.

Spaces around the base of the canopy allow breezes to flow through, providing natural ventilation. Vents at the roof’s apex also allow warm air to escape.

The Green School has been constructing bamboo buildings at its campus in Bali, Indonesia, since it was founded in 2008. The school now also operates campuses in New Zealand, South Africa and Mexico.

All of the buildings at the jungle site in Bali’s Badung regency are designed to be energy efficient and constructed using natural materials wherever possible.

John Hardy and Jörg Stamm worked together with designer Aldo Landwehr to create the initial buildings and infrastructure including bridges and a spiralling three-storey building housing the high school and administrative areas.

Bamboo was also used by Chinese firm LLLab to create an undulating riverside canopy on the site of a popular light show, while Ruta 4 also constructed a clothing factory in rural Colombia from bamboo.

Photography is by Tommaso Riva.