Architecture and engineering studio Interrobang has fitted out its east London office with freestanding plywood furniture units, painted in the same pastel hues as insulating foam typically concealed within a building’s walls.

When Interrobang moved into the space on the first floor of a five-storey 1970s office block in 2016, it was completely empty and had no kitchen or meeting room. The studio designed a series of freestanding furniture units that are used to compartmentalise the office, creating these essential spaces, as well as a reception, IT room and various breakout areas.

“Our aim was to create a working environment that would encourage communication and collaboration,” Interrobang co-founder Maria Smith told Dezeen. “The office is organised around two large tables – one pink, one green – where we come together for everything from design workshops to curry Thursdays,” said Sith.

“We then defined the other spaces by colour, with a pink meeting room, green kitchen, blue library, and yellow printer bar.” 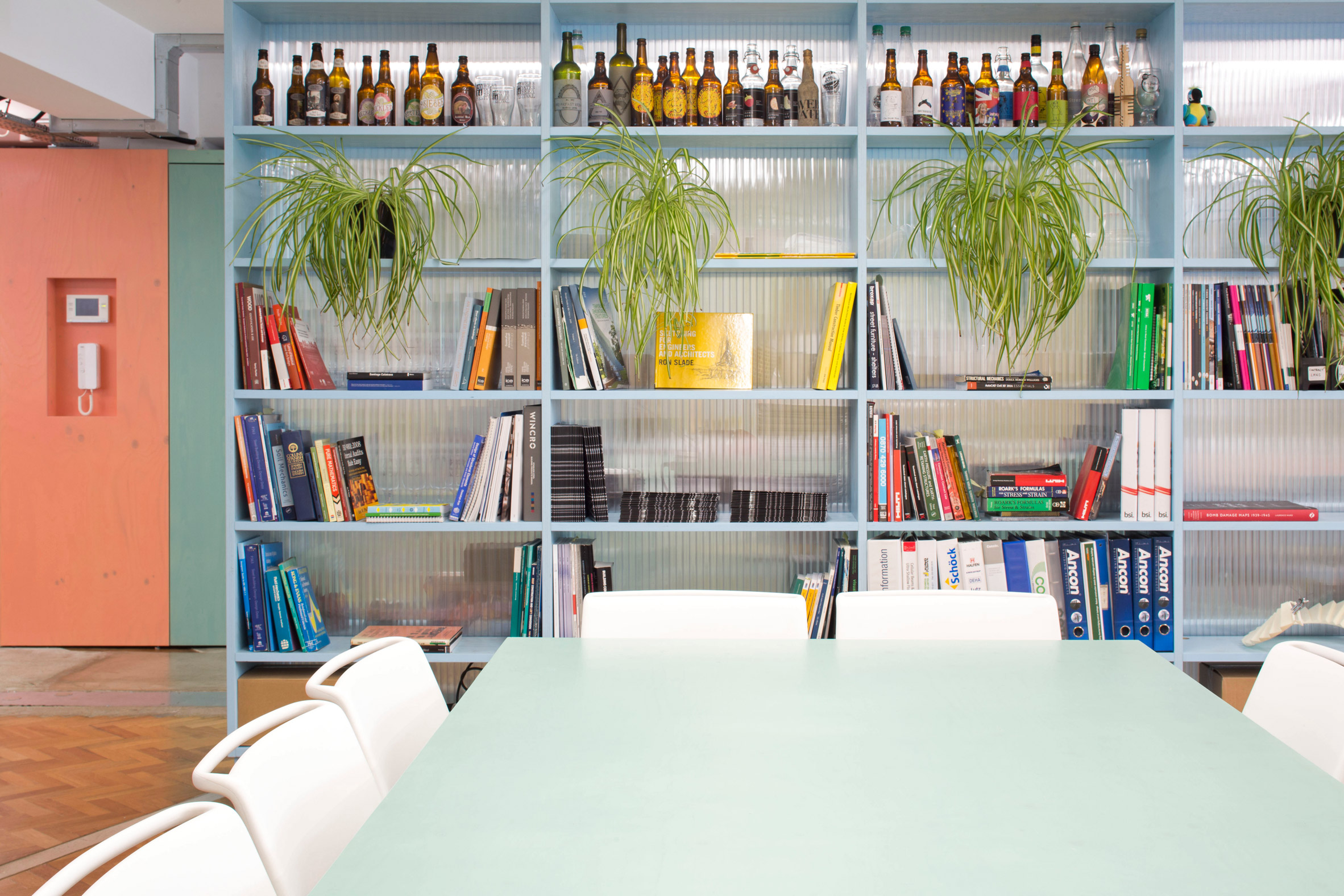 The tall units are made from plywood – a material that is getting a lot of attention at the moment, thanks to a new exhibition at the V&A. The material, which is made by layering up and glueing thin strips of wood veneer, has recently also been used to create a jigsaw-esque staircase and a gin trolley. 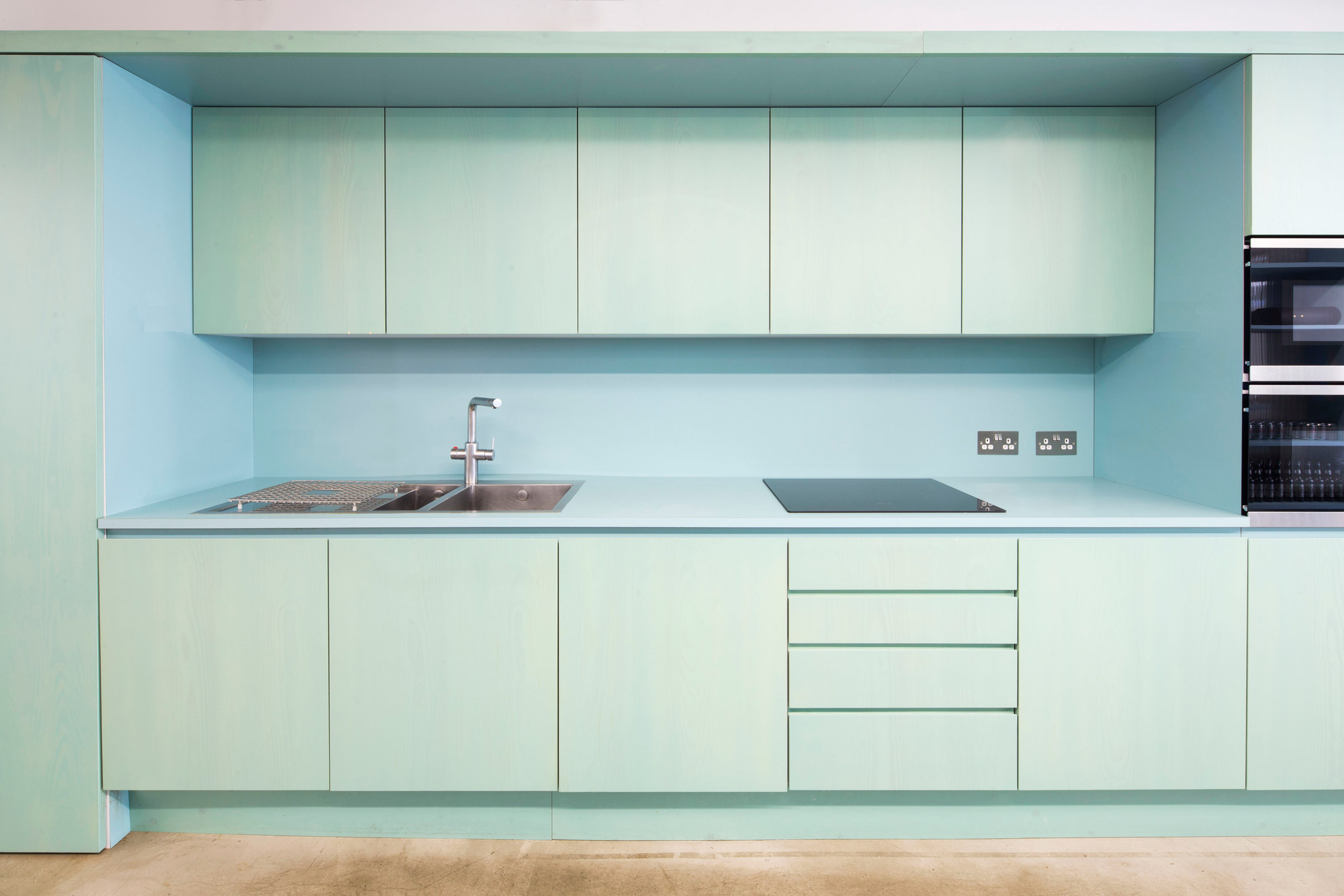 Interrobang chose to use spruce plywood, not only for its affordability, but because it could be used to create precisely detailed furniture using computer-controlled cutting and assembly techniques.

The freestanding walls can be removed in the future without damaging the building fabric in any way. 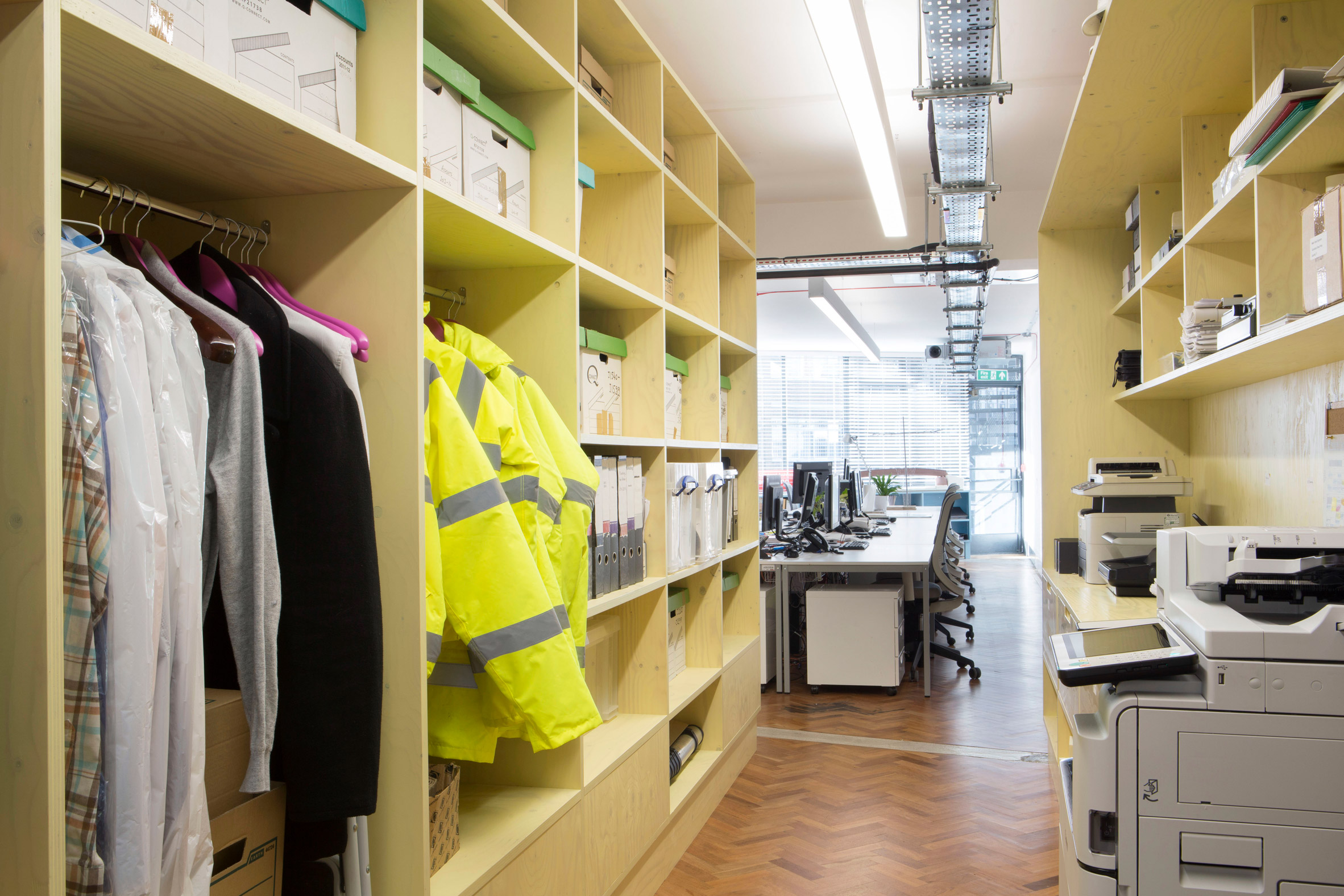 Each of the hues chosen for the painted surfaces is borrowed from a specific type of insulating product. For example, Kooltherm Pink is used for the reception, IT room and meeting room.

The kitchen is a pastel green used by floral products supplier, Oasis, and was chosen to act as an appropriate backdrop for cooking and eating.

A Styrofoam-blue bookshelf and a printer area the same yellow shade as polyisocyanurate (PIR) insulation sandwich the central meeting space. “Foams and insulation come in different colours to indicate their density and use, but these colours are then hidden in the meat of the building,” Smith added. “We thought it would be nice to enjoy the surprising beauty of these functional colours.” The units lining the meeting room and a double-sided shelving wall separating the kitchen from the communal tables incorporate twin-wall polycarbonate that forms a visual barrier whilst allowing light to permeate. Smith teamed up with Steve Webb and Andy Yates of Webb Yates Engineers to establish Interrobang, a trans-disciplinary architecture and engineering practice. Before that, she was one of the founding directors of architecture office Studio Weave.

Her past projects include an artist’s studio and bird-watching hide covered in colourful hand-painted patterns, and an installation at a London hospital comprising a network of pipes and horns that played a soundtrack of lullabies.

Photography is by Agnese Sanvito. The post Interrobang fills its office with custom plywood furniture painted the colours of insulating foam appeared first on Dezeen.