Three vaulted structures built using compressed soil-cement tiles form a canopy at this cricket pavilion in the Rwandan capital, Kigali, which looks out across the ground and a wetland valley. 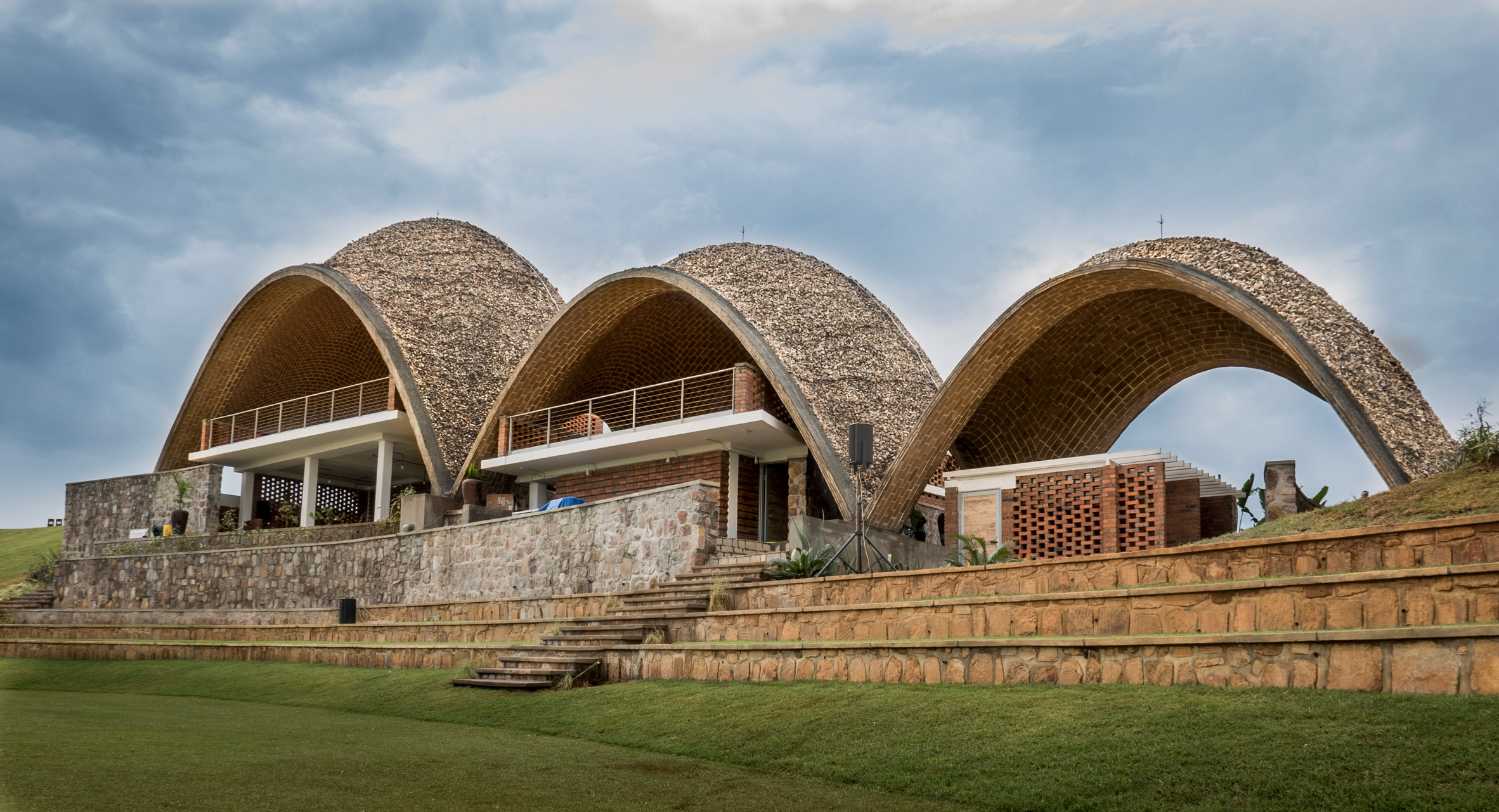 The pavilion for the Rwanda Cricket Stadium was developed by a British collective called Light Earth Designs that explores sustainable approaches to architecture and urban design.

The partnership between architects Peter Rich, Timothy Hall and engineer Michael Ramage aims to implement renewable, locally made projects that are culturally appropriate for communities in the developing world. 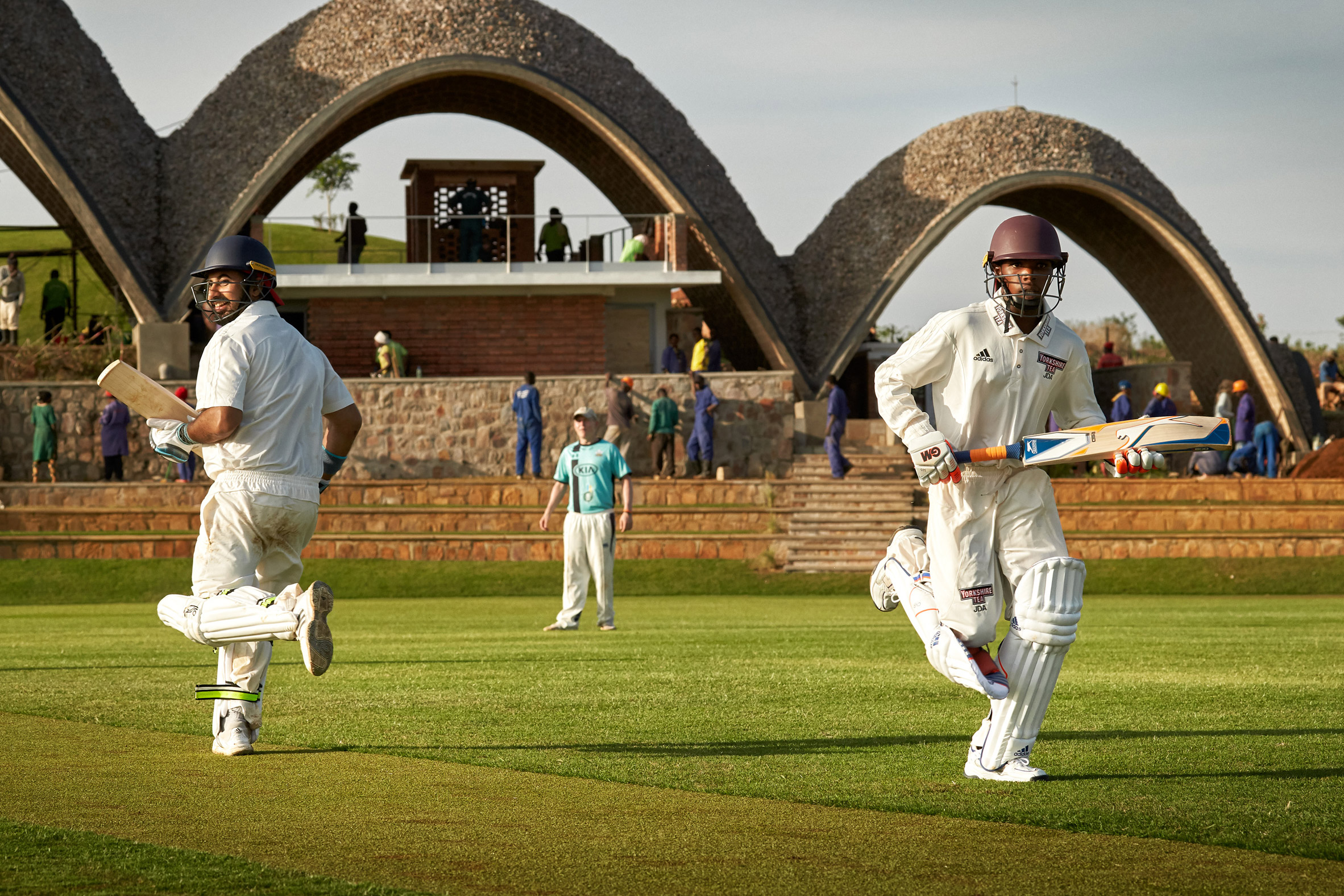 Light Earth Designs developed a process for constructing thin-shell vaulted buildings using locally sourced materials and labour. The same technique was previously used to erect a cultural centre in South Africa that was named World Building of the Year at the World Architecture Festival in 2009.

The building system was developed using structural analysis to determine the optimal form of double-curved vaults that transfer forces down to the ground. The entirely compressive structure allows the vaults to be constructed using layers of low-strength tiles. 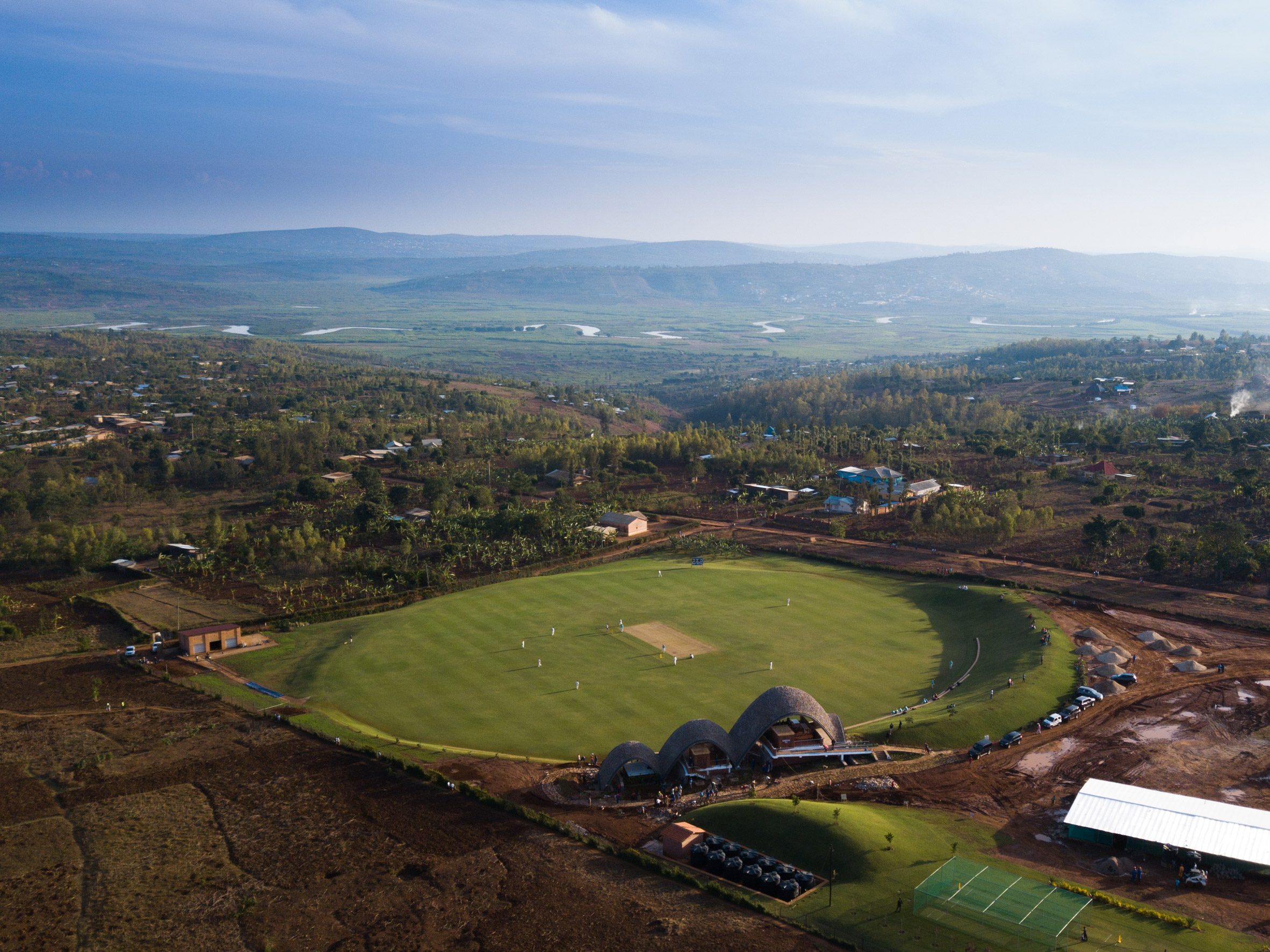 The tiles for the Rwanda Cricket Stadium were made on site from local soil by low skilled and skilled local craftsmen. The soil is mixed with a small amount of cement and hydraulically pressed so no firing is required.

A temporary timber framework was erected to support the tiles, which are laid in layers to form vaults that draw inspiration from ancient Mediterranean construction techniques and span up to 16 metres. 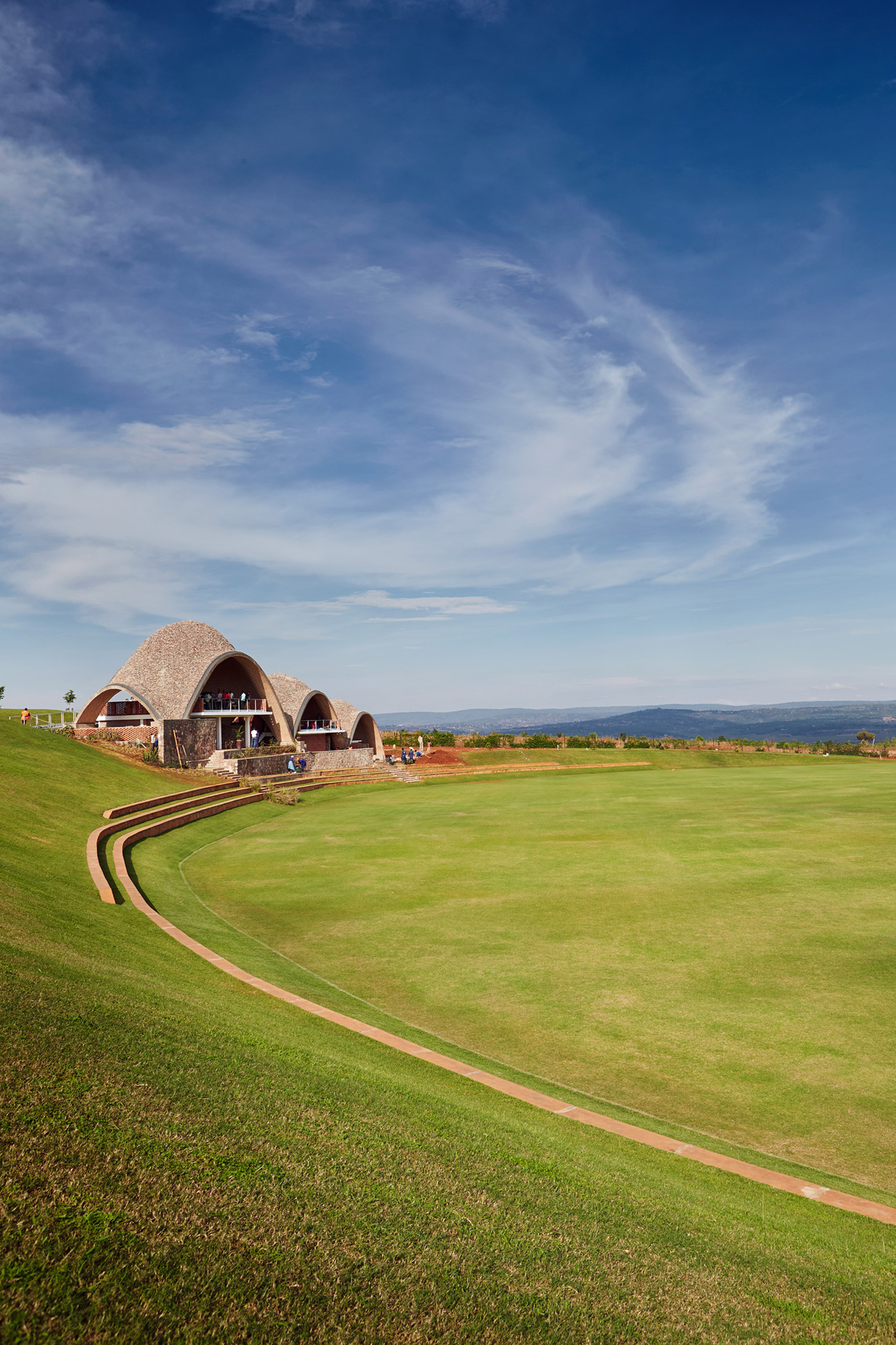 “The vaults follow the natural resolution of forces toward the ground,” said the architects, “closely mimicking the parabolic geometry of a bouncing ball and evoking the cherished hilly topography of Rwanda.”

The shape of the surfaces also helps to spread the load and provides some seismic protection. The inner layer of tiles is laid upwards from the perimeter and is held in place using a quick-setting gypsum mortar. Subsequent layers are laid using a thin lime and cement mortar inlaid with geogrid – a geosynthetic material typically used to reinforce soils and prevent surfaces pulling apart when under tension.

The roofs are waterproofed and topped with chunks of local granite that enhances the stability and creates a natural finish.

Each of the parabolic structures spans above an elevated concrete slab placed on top of brick-walled boxes. These solid volumes contain a restaurant, office, changing rooms and service areas, while the open-air mezzanines accommodate a bar and clubhouse with views of the cricket ground. 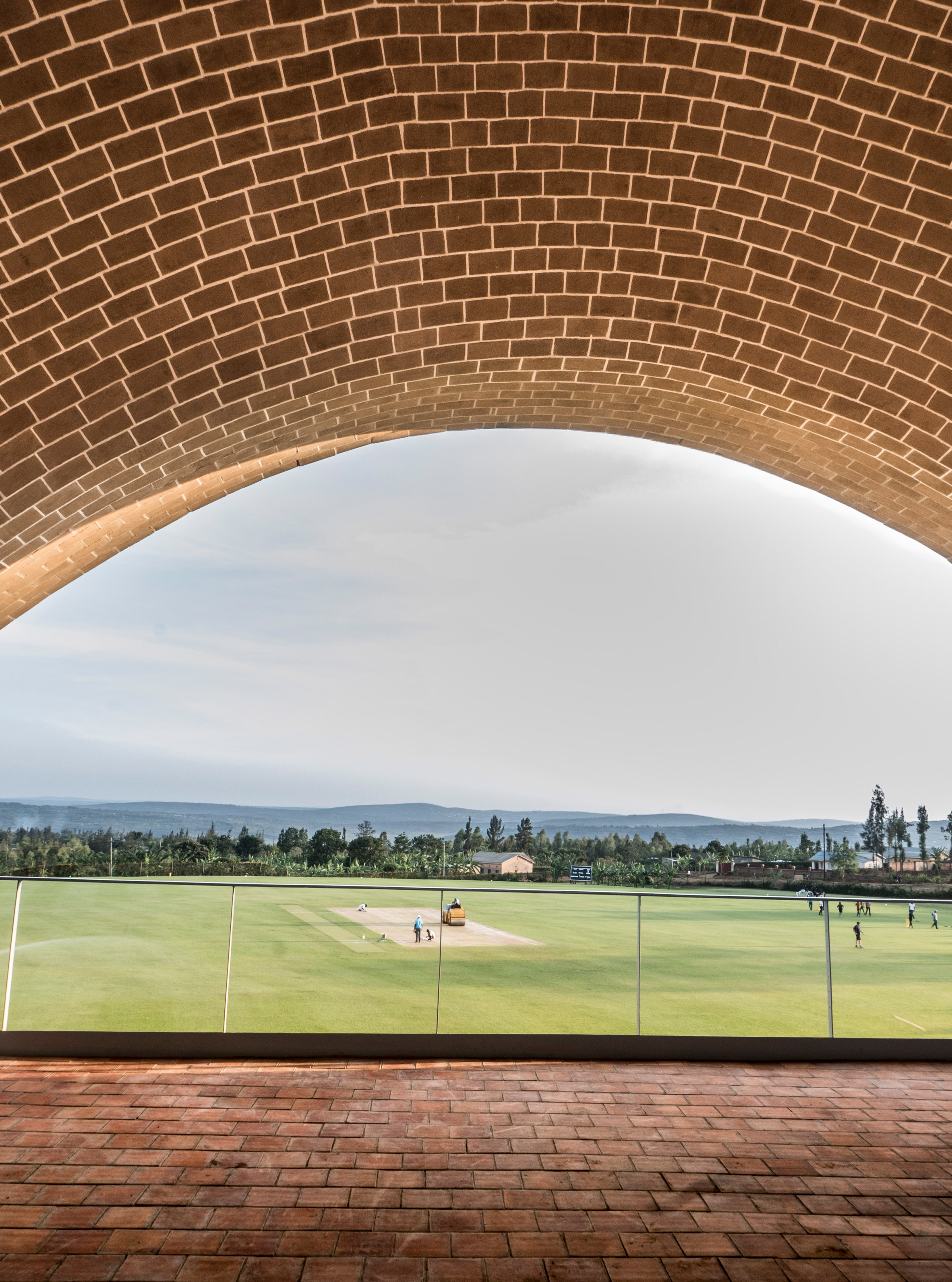 The bricks used to construct the pavilion’s walls are low-carbon agro-waste-fired bricks produced using high-efficiency kilns. In places, these are laid in a perforated pattern to allow natural light and ventilation to reach the interiors.

Recycled and salvaged materials are used throughout the project. The floors are waste stone from unwanted Rwandan granite floors and worktops, while plywood rectangles used to form the tiles are reused as countertops. 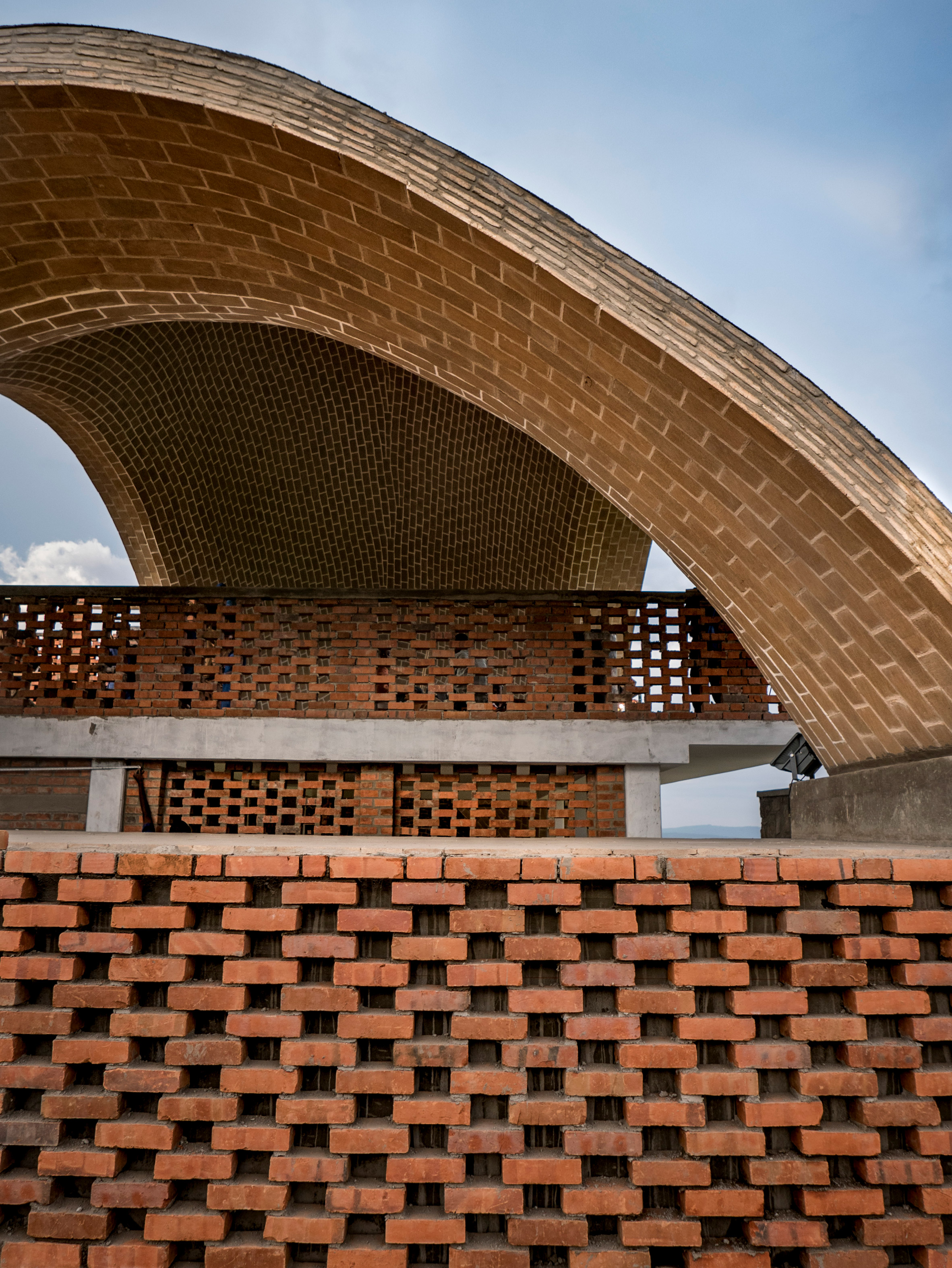 The building is positioned on a banking created when the cricket pitch was levelled, allowing it to rise up as if it is part of the landscape and providing it with an elevated vantage point.

“While the language of the building speaks about progression and dynamism through extreme structural efficiency, the materials speak of the natural, the hand made and the human,” said the architects. “It is a building made by Rwandans using Rwandan materials.” 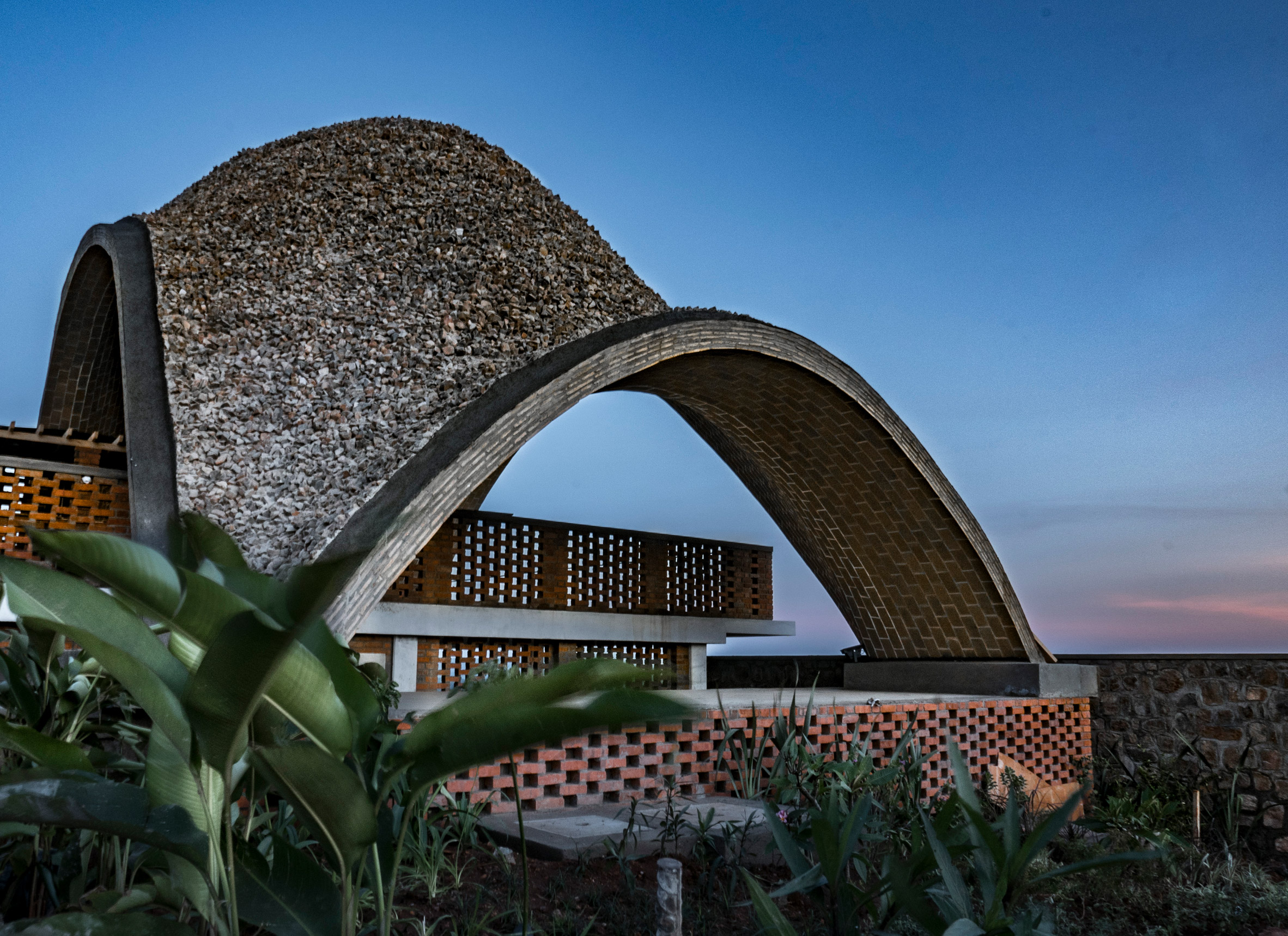 Another project that used the same principle to create a large self-supporting canopy made from slabs of limestone formed the centrepiece of an exhibition at the Venice Architecture Biennale 2016.