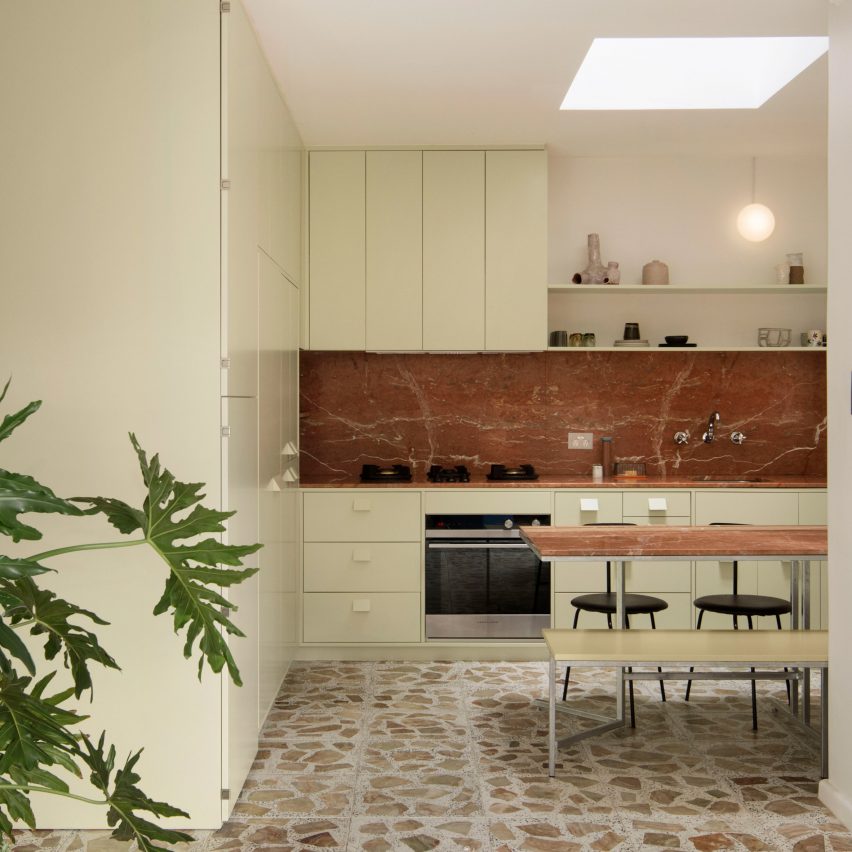 When the current owners bought the walk-up apartment, it had been empty for 20 years and had its original decor including linoleum and carpet floors and salmon pink walls. The owners wanted to retain its character while updating the living spaces to suit modern life.

“The apartment’s layout was typical of many apartments of this typology, with a clear division between living and private spaces and with frontage on two sides,” Barker told Dezeen.

“We wanted to retain room divisions, but at the same time improve connections, extend sightlines and bring more natural light into the kitchen.”

The apartment’s original large windows provided ample natural light and effective cross ventilation. The owners felt that the existing kitchen, however, felt disconnected from the living room as the space was too confined to accommodate a dining table and lacked adequate natural light.

To remedy this, Barker and Stewart reconfigured the plan to improve the connection between the living room and the kitchen.

The dividing walls between the two rooms were partially demolished and joinery elements were inserted to reorder circulation paths between the home’s central entrance, the reoriented kitchen and the living room.

“We expanded the use of integrated joinery, considered existing proportions and details, and the use of high quality, robust but interesting materials,” said Murray.

The new kitchen layout has an L-shaped plan that is open to the living area and anchored by a custom-made steel frame table with a Rosa Alicante marble top and fixed banquette seating.

Visible from the living room, a long kitchen countertop made from the same red marble as the table completes the L-shaped kitchen plan and incorporates a stove, oven and sink.

A skylight above the kitchen table lets sunlight into the space through thick glass roof tiles. The ceiling is insulated and the roof window is double-glazed to minimise additional heat gain and to retain winter warmth.

Murray and Stewart selected the pistachio green colour for the joinery in a nod to the original 1960s-era kitchen that it replaced. Details include visible framing around doors and drawers and custom finger pulls. Sliding-pocket doors reveal a hidden appliance area in the pantry to hold a toaster, kettle and coffee machine.

“Each apartment in the block has a unique toilet, bath and sink set in contrasting colour palettes, in combination with unique terrazzo flooring in the bathroom,” Murray explained. “The interior materiality was specific and robust but enthusiastic and this was something we wished to explore and elaborate upon.”

The terrazzo floor tiles that are used across the rest of the apartment were salvaged excess stock from a larger project and were chosen to complement the original floors.

“These buildings are visually robust, but there is beauty in the material nuance of the brown brick and subtle ornamentation through the considered design of ordinary things,” he continued. “The original interior aesthetic was far from white walls and plain tiles.”

Photography is by Benjamin Hosking.