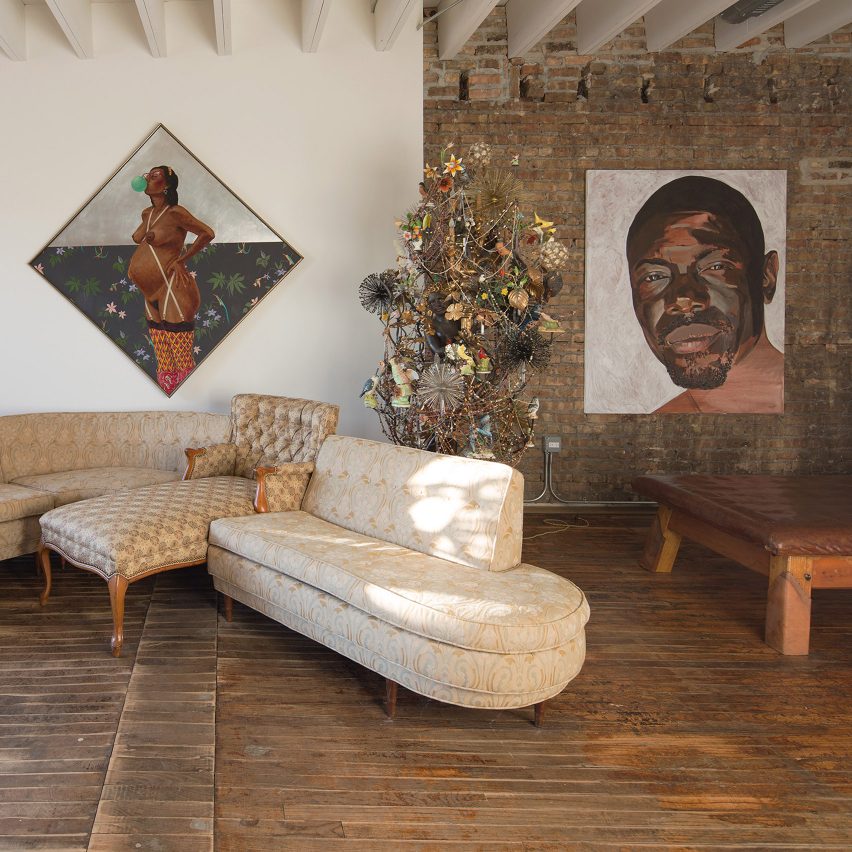 Toronto architect Carlo Parente has renovated an old and dilapidated mason’s shop in Chicago to create a live and work space called Facility for artists Nick Cave and Bob Faust.

Located at the intersection of two prominent streets in Irving Park, Facility restores and reuses several elements of the 1920’s industrial building, which is composed of a two-storey masonry structure with three storefronts, a single-storey annexe and a garage.

Cave and Faust’s primary goal for the renovation was to transform the building into a place to display their extensive art collections. However, they also desired a private residence, event space and studios for other creatives in Chicago.

To achieve this, Parente reconfigured the building to function as an open, flexible “framework” to display art and use as studio space, with some enclosed, private rooms positioned in between.

“When Nick and Bob engaged me to collaborate, they had already carefully thought through their needs and they had considered the spaces of the various programme elements,” Parente told Dezeen.

“They had a clear agenda of wanting these spaces to be able to act in a flexible and open manner with the display of their art and art collections as being primary,” he explained. I began to think of the project as a framework for their work – the entire building as a transformative framework and platform for the production and presentation of their work.”

“The fluidity of the space and the architecture-as-framework design works beautifully, creating a feeling of ease – lived in, natural, and humming pleasantly with activity.”

Parente’s design for the overhaul involved retaining as many existing elements of the building as possible to celebrate the history of the space.

He transformed the single-storey building at the north corner of the site into the building’s entrance, while also introducing a library, a lounge and a private studio space for Faust.

The annexe now links up with the ground floor of the two-storey structure, which contains Cave’s studio, a series of communal workspaces, a washroom and a kitchenette.

The adjoining garage serves as a multi-functional space for events or making art, while the second floor of this building contains the artists’ private residence, alongside an apartment for an artist-in-residence.

Throughout, a number of worn, existing masonry walls have been exposed, alongside graffitied concrete columns, old plastered walls and even the remains of an old wasp nest.

“Nick and Bob embrace the vestiges of what was previously there, even an abandoned wasp nest that stayed in place at their request, now revealed by an opening in the ceiling,” Parente explained.

The original masonry walls are the only full-height walls left in the building, as Parente removed all the non-loading bearing walls to achieve the open space the artists desired.

Some of these walls are punctured by new openings, while circulation spaces have also been widened throughout to transform corridors into galleries and areas to gather.

To allow users to adapt each space or achieve more privacy, Parente has also installed a series of pivoting and sliding partitions throughout.

All of the new architectural additions to the building have been chosen to deliberately contrast with the original elements.

This includes plywood furnishings that stand out against the masonry and directional changes in the patterns of the wood flooring to emphasise where gaps have been filled.

The furniture featured throughout Facility also follows this patchwork approach, combining “an eclectic mix of pieces” collected by Cave and Faust ranging from floral, upholstered sofas to Eames’ classics.

Every available surface is used to display art, including work by both artists and their collections that include pieces by Kehinde Wiley, Kerry James Marshall, Beverly Mclver and Titus Kaphar.

As part of the project, Parente also updated the exterior of the building. This included reopening the building’s original storefronts to maximise the light inside and create exhibition spaces that displaying the work of the artists to passersby.

To the southwest of the building, an old parking space has been enclosed with fencing made from recycled shipping containers. This now functions as a private, landscaped courtyard that is accessible from Cave’s studio.

Facility is complete with a private rooftop with a sunroom and greenhouse, contained within a former shed. They are both orientated to the southwest to maximise evening sunlight and vistas of the city, described by Parente as “a quintessential Chicago view”.

Other recent adaptive reuse projects featured on Dezeen include Annabelle Tugby Architects’ renovation of a semi-derelict joinery workshop in a cow field in Cheshire, UK, to create its own studio and, in Arnhem, the transformation of an expansive production hall of an old nylon factory into a “cathedral-like” office space.

Photography is by Michelle Litvin.