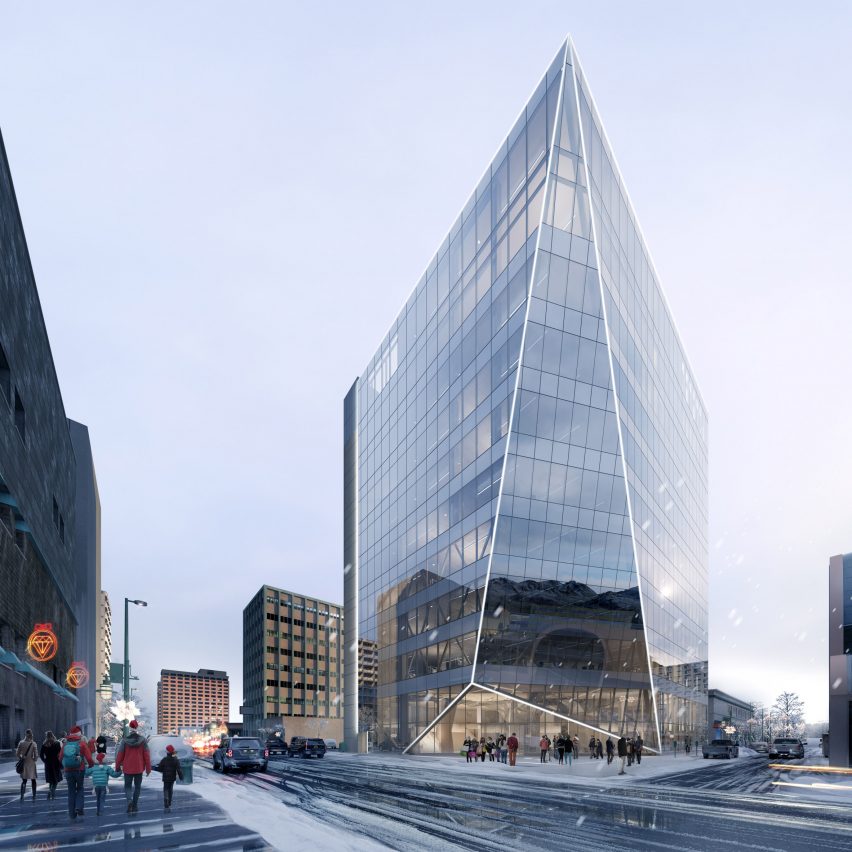 Architecture firm Perkins and Will plans to revive a vacant 1970s office building in Alaska by stripping it back and re-cladding it with an angular, glazed facade that mimics a glacier.

The overhaul of the nine-storey Key Bank Plaza office, located in Downtown Anchorage, follows the abandonment of the building.

In 2018 a 7.1-magnitude earthquake structural damage that rendered the building unsafe.

Alongside a contemporary facelift, Perkins and Will will revamp the office’s interiors and introduce improved seismic reinforcements and building services.

“We are excited to breathe new life into the former Key Bank Plaza building, which was one of approximately 750 buildings damaged by the 2018 Anchorage earthquake,” explained Perkins and Will Erik Mott.

“The repositioning will not only provide modern amenities to future tenants but will also serve to revitalise downtown Anchorage.”

Though hundreds of buildings were damaged in the earthquake, Key Bank Plaza was the only commercial building in the area forced to close. Its reopening is currently slated for 2022.

According to Perkins and Will, the overhaul is the first construction project to be carried out in Downtown Anchorage in a decade and it is hoped to spark further developments that will reinvigorate in the area.

The main part of the renovation will involve the stripping back of Key Bank Plaza’s existing precast-concrete cladding and replacing it with 40,000 square feet (3,700 square metres) of sleek, angled curtain walls.

While introducing more daylight inside the building, this floor-to-ceiling glazing is designed to give the building a glacial appearance that “pays homage to Alaska’s natural wonders” according to the studio.

Inside, Perkins and Will will introduce contemporary mechanical, plumbing, and electrical systems along with a new stair tower and elevators.

It will also be fitted out with radiant heat technology and six new skylights which are hoped to improve the interior environment during dark, snowy winters.

The renovation will be complete with the planting of native, drought-resilient plants, and improvements to the hardscape surrounding the building.

Perkins and Will is an international architecture practice that was founded in 1935 by Lawrence Perkins and Philip Will. Its redesign of the Key Bank Plaza is being carried out by its office in Seattle.

Elsewhere, the studio is also currently developing the EU’s European Commission offices in Brussels, and in Vancouver, it is designing well as the “world’s tallest hybrid wood tower” that will marry laminated wood with concrete.

The post Perkins and Will redesigns earthquake-damaged Alaska office to evoke glacier appeared first on Dezeen.