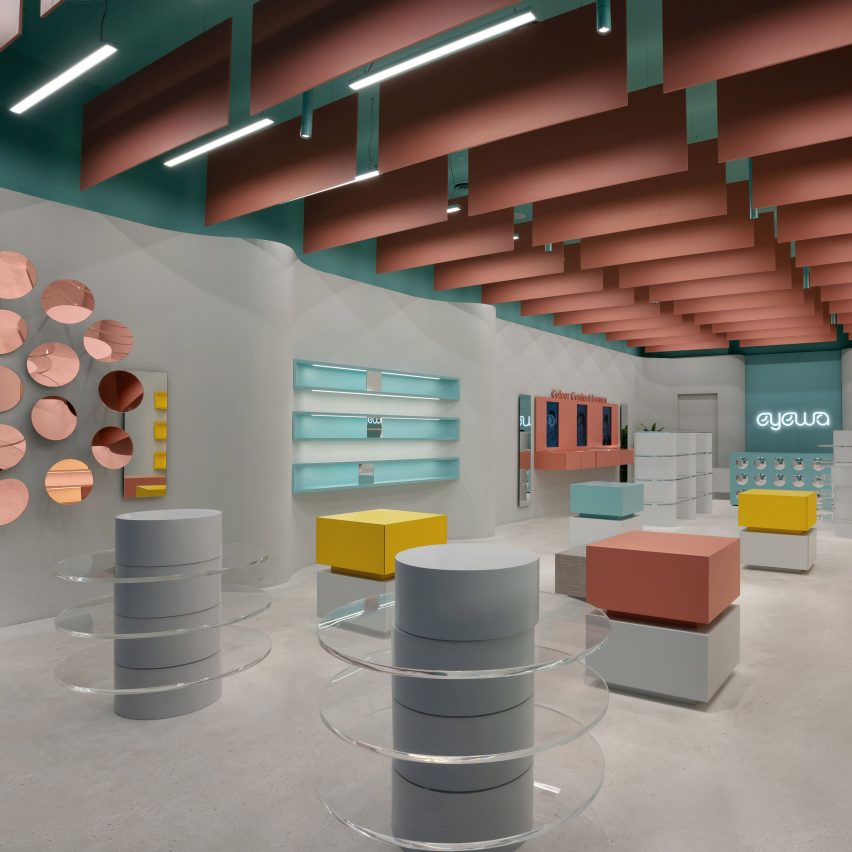 Located in the Mall of Dhahran, the 100-square-metre retail space is the first flagship store for Dubai glasses brand Eyewa.

“Our wish was to move away from typical eyewear retail atmospheres,” said Brocas. “When you think of eyewear stores, you usually have something clinical in mind – all products are regimented under strong bleached lights. When Eyewa approached us, we felt we had to design something bold.”

The store’s shell was conceived as a grey capsule with terrazzo flooring and undulating clay walls, designed to wrap the store “like a thin sheet of paper”.

“These waves add softness to the surroundings of the space and create separate moments while keeping the floor plan open,” the duo explained.

The designers conceptualised the wall units as sculptural artworks, while cylindrical and cuboid display plinths populate the centre of the store to evoke the feeling of being inside a gallery.

Made from plywood and clear acrylic, these flexible units can be stacked and rearranged to create different layouts.

“The Memphis movement was an important reference for this project,” Brocas told Dezeen. “We love the playful and impactful work of Ettore Sottsass and we thought this approach was very suited to Eyewa’s unapologetic use of colour and its lighthearted spirit.”

“We are also very drawn to minimal artists such as Donald Judd,” he continued. “You can see a touch of post-modernism and a bit of minimalism in the aesthetics of this store.”

Above, a ceiling installation made of 39 hanging panels draws customers further into the store, hiding pipes and wires while seamlessly integrating the lighting system. The panels are painted coral on one side and turquoise on the other to add “an element of surprise”.

Interactive screens allow customers to virtually try on sunglasses and different coloured contact lenses while an immersive, turquoise-coloured exam room is located in the back of the store.

A series of convex mirrors line the sales counter, recalling the shape of optical lenses.

“We remembered visiting Luis Barragán houses in Mexico and noticing that he places mirrored balls in the rooms to reflect and warp the space,” Brocas explained of their inspiration.

Eyewa’s flagship is the duo’s first project together. Previously, Brocas created interiors for fashion retailers, while Oudghiri has designed a number of buildings in Morocco.

They met while studying at California Polytechnic State University and said their collaboration allowed them to form an interior that is “halfway between eye-catching spatial design and long-lasting architectural principles”.

Photography is by Hussain Khatim.