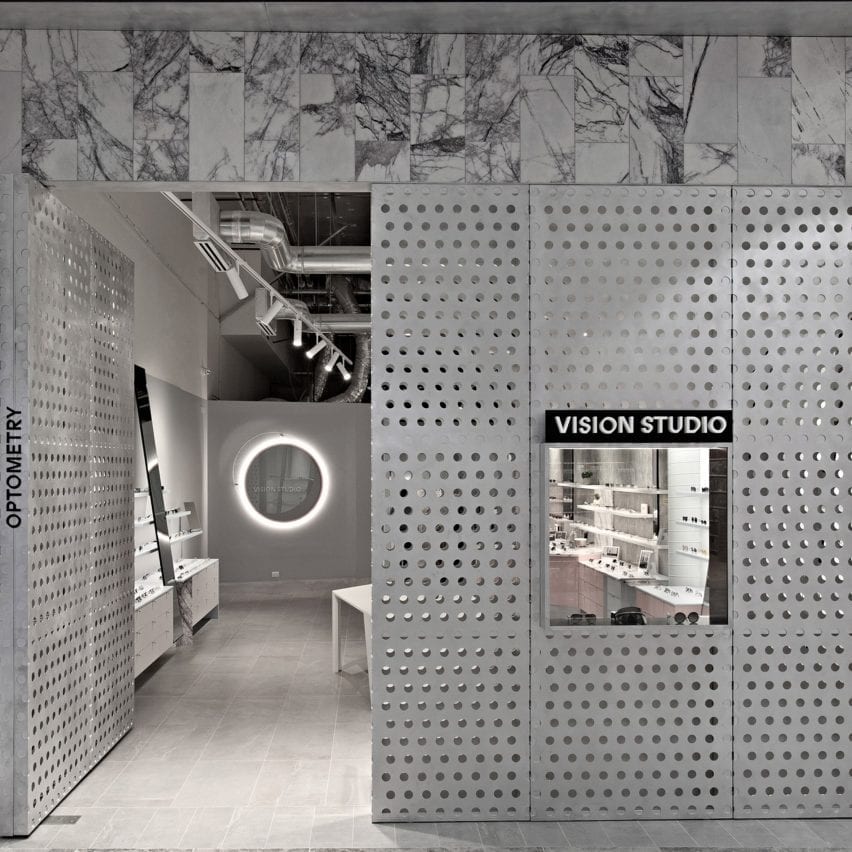 Cool-toned industrial materials such as aluminium and concrete are paired with marble surfaces and translucent pastel shelving in this eyewear store in Melbourne, Australia.

Designed by local firm Studio Edwards, the first flagship store by optometrist Vision Studio is housed in a shopping centre in the city’s Glen Waverley suburb.

Half of the store’s 3.6-metre-high perforated aluminium facade hinges open to reveal what the studio describes as a “jewel-like” interior, framed by marble tiles that contrast with the raw concrete of the existing shell.

Inside, Studio Edwards set out to create a space reminiscent of a gallery, including enough display space for 200 spectacles and storage for an additional 800 pairs alongside three consultation rooms with waiting areas and a staff and store area.

To accommodate these functions, the floor plan is split into two zones with the store and display area at the front, and the optician and consulting spaces at the rear.

“The space is zoned via an angular plan configuration with the areas requiring most privacy to the rear and semi-private consulting spaces tapering to the front,” Studio Edwards founder Ben Edwards told Dezeen.

“One challenge was to work with the existing air conditioning ceiling ductwork – we chose to expose them and include them within the overall aesthetic.”

Pastel-coloured accents are applied to the shelving and cabinets that run along the walls on either side of the Vision Studio store.

The material palette, which the studio described as “a balance between raw and refined”, blends industrial materials such as aluminium and concrete with marble surfaces and translucent shelving that seems to hang in midair.

Other studios that have combined industrial materials and soft, powdery colours include Spanish studio Lucas y Hernández-Gil, which contrasted pastel furnishings against concrete walls in this restaurant in Seville.

Photography is by Tony Gorsevski.