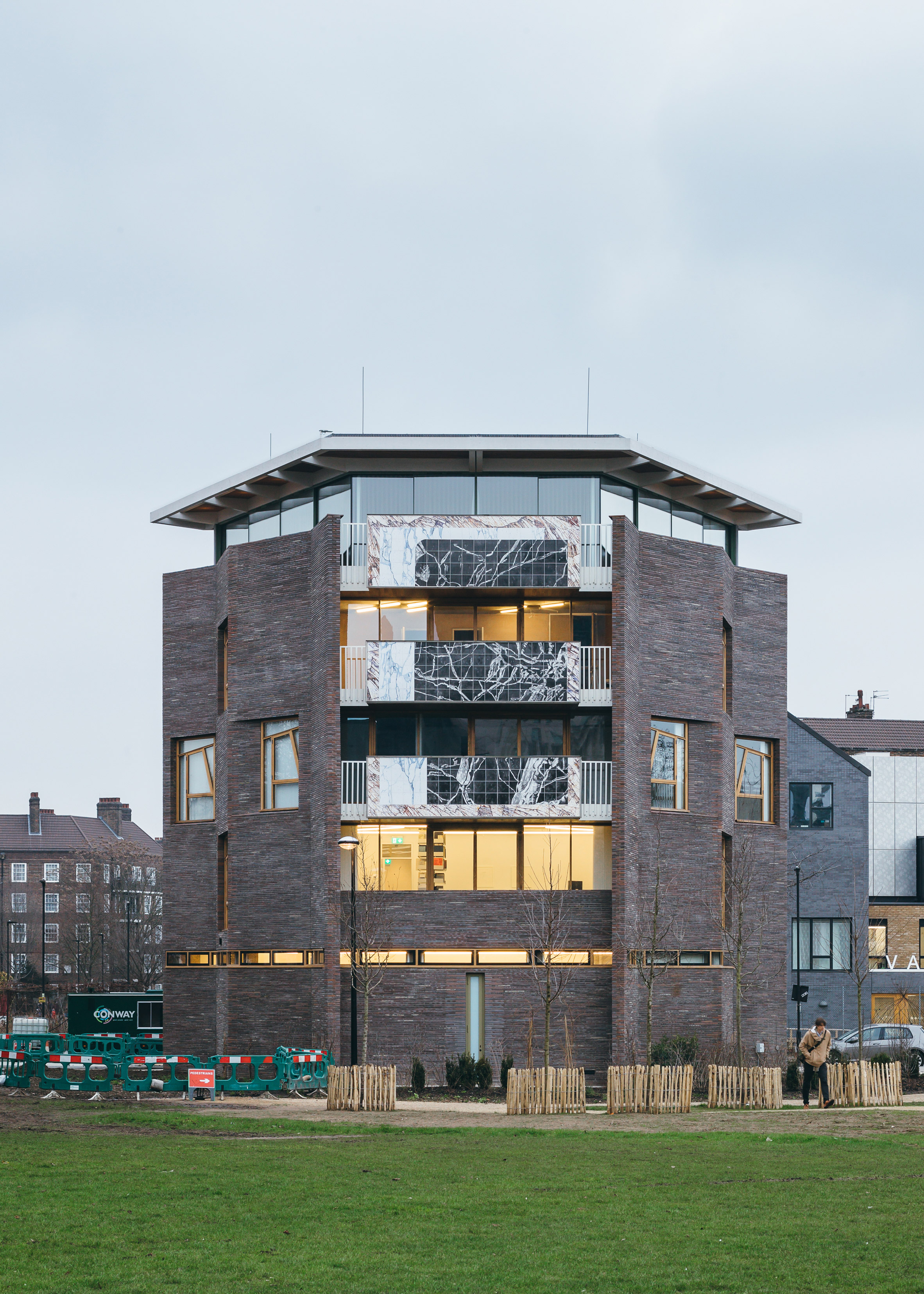 The building on Tyers Street is the first permanent location for Cabinet Gallery, which was founded in Brixton in 1991 but had previously been operating from premises in the city’s Old Street area.

The gallery’s directors Martin McGeown and Andrew Wheatley and architect Trevor Horne had been looking for a suitable gallery space for almost a decade, before eventually discovering the site in the park near Vauxhall underground station. 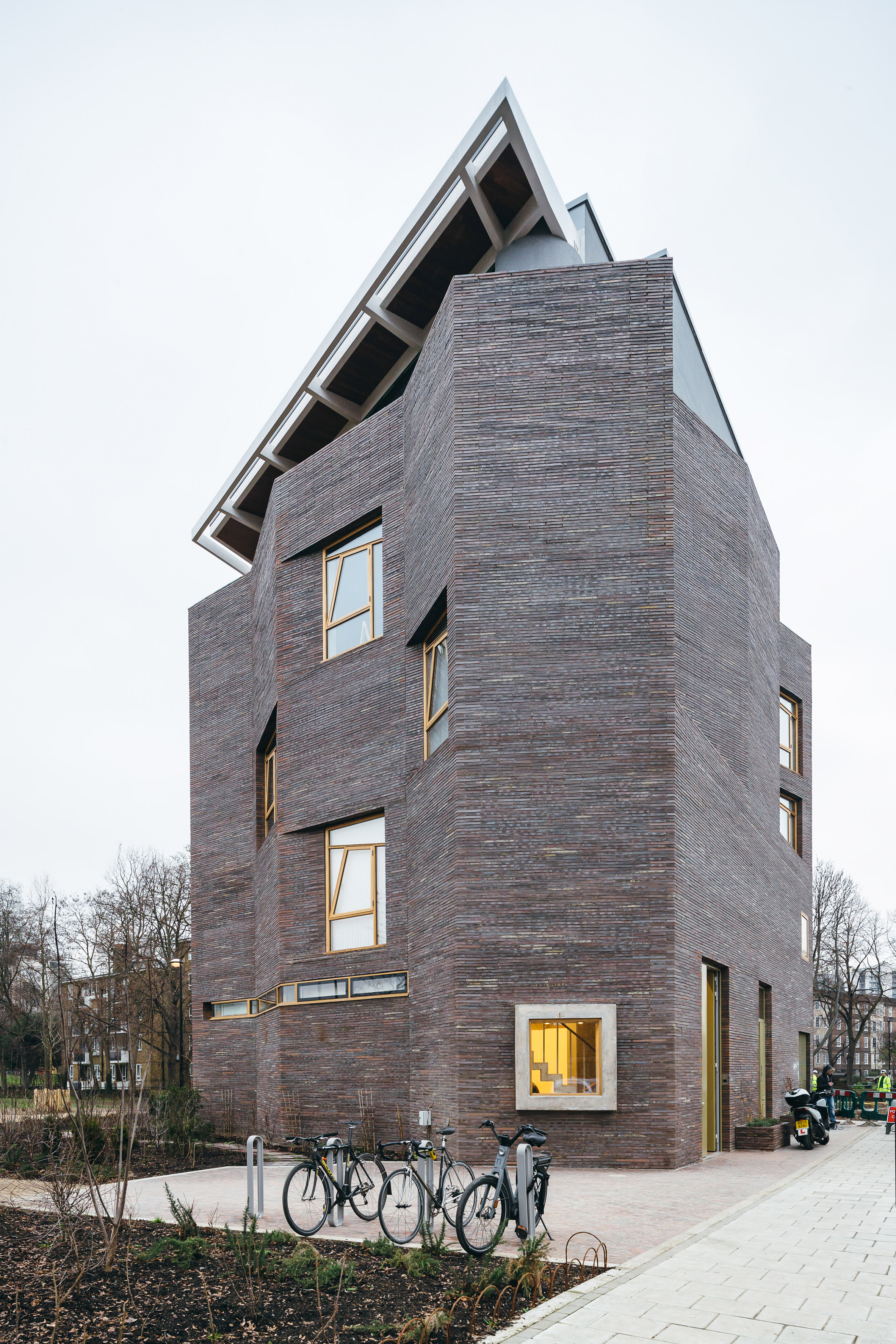 Vauxhall Pleasure Gardens was established in the 17th century as a suburban venue for public entertainment and remained as such until the mid-19th century, during which time it was absorbed into the growing metropolis.

Now greatly reduced in size, the gardens are still used to host events and festivals, as well as providing a green space bordered by roads and railways lines. 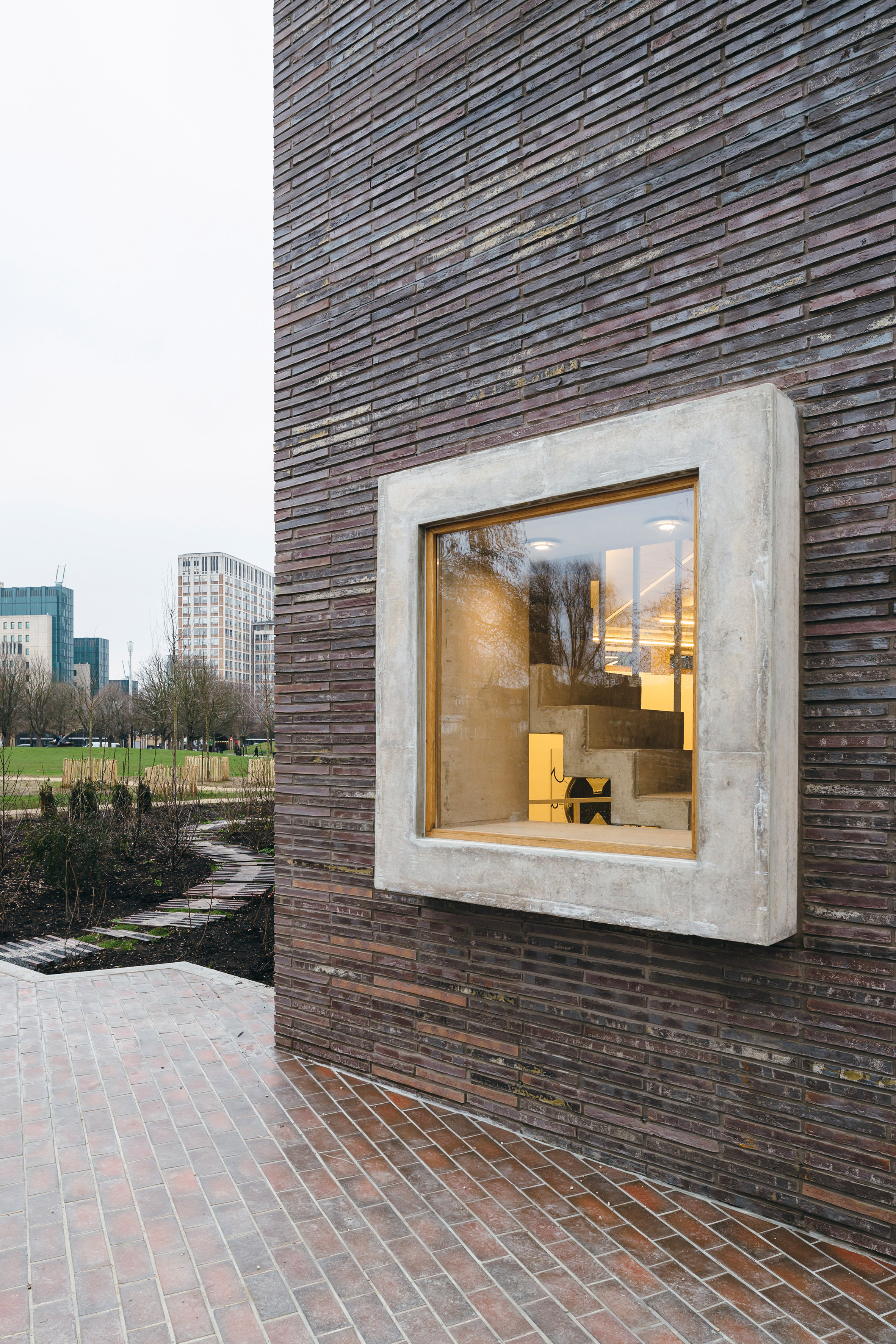 With backing from London-based arts patron Charles Asprey, the gallerists approached local charity the Friends of Vauxhall Pleasure Gardens and Lambeth Council with a proposal to redevelop the site of the demolished Lord Clyde Pub. 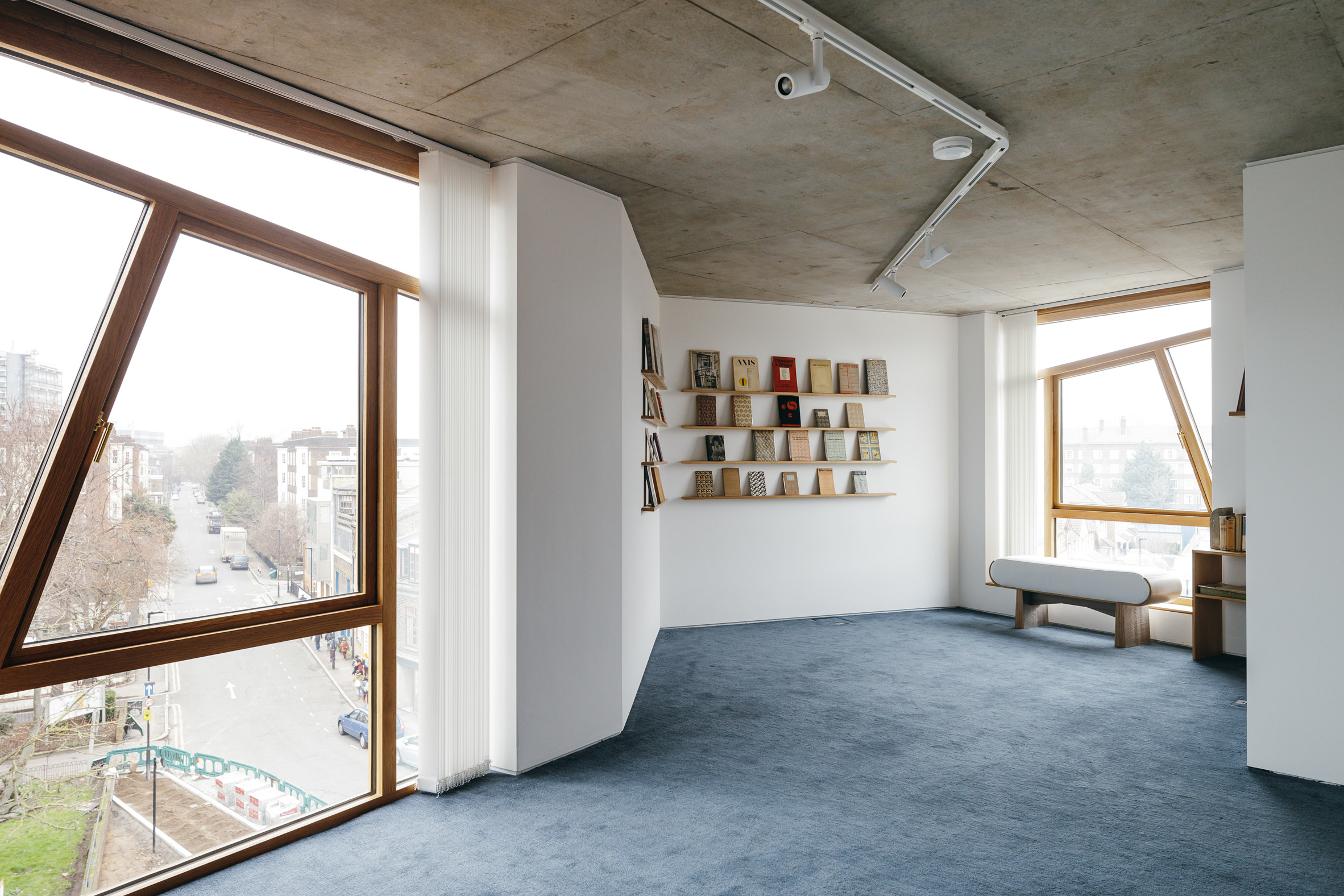 The site was also one of the original entrances to the Pleasure Gardens, and the architects wanted to reinstate this function by creating a landmark surrounded by public space that welcomes visitors.

“As architects our first instinct was to make a gesture to the park and bring people in,” Horne told Dezeen. “We were able to give more space to the park by getting rid of an access road and bringing the park right up to the street.” 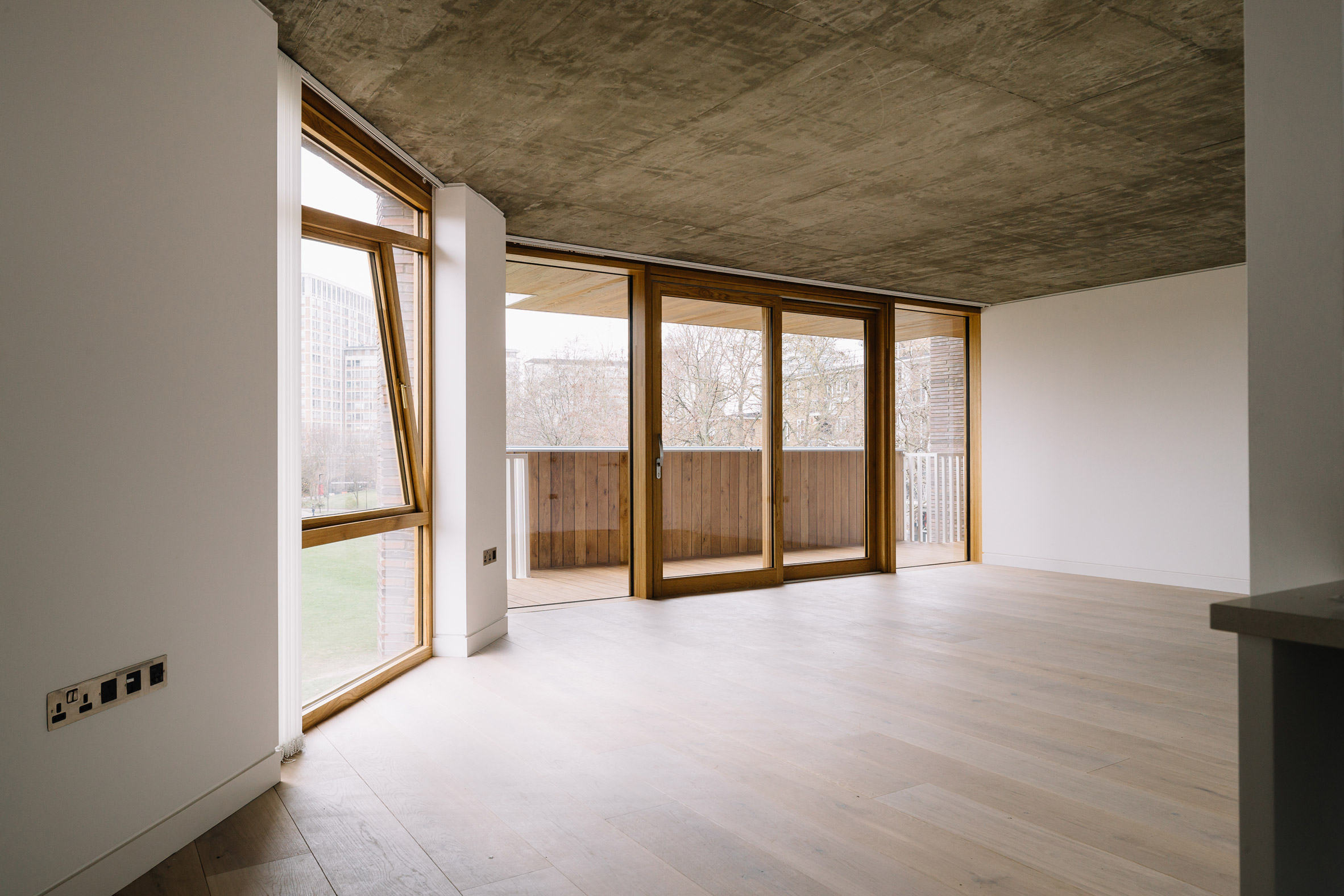 The building’s folded form was informed by research into the structures that previously occupied the park, as well as in-depth discussions with the clients regarding their specific needs.

“We were trying to pick up from the pavilions that were once in the Pleasure Gardens,” Horne explained. “We also explored with the gallerists what sort of space would suit them and allow them to curate a number of different exhibitions, so the folded shape came about from these discussions.” 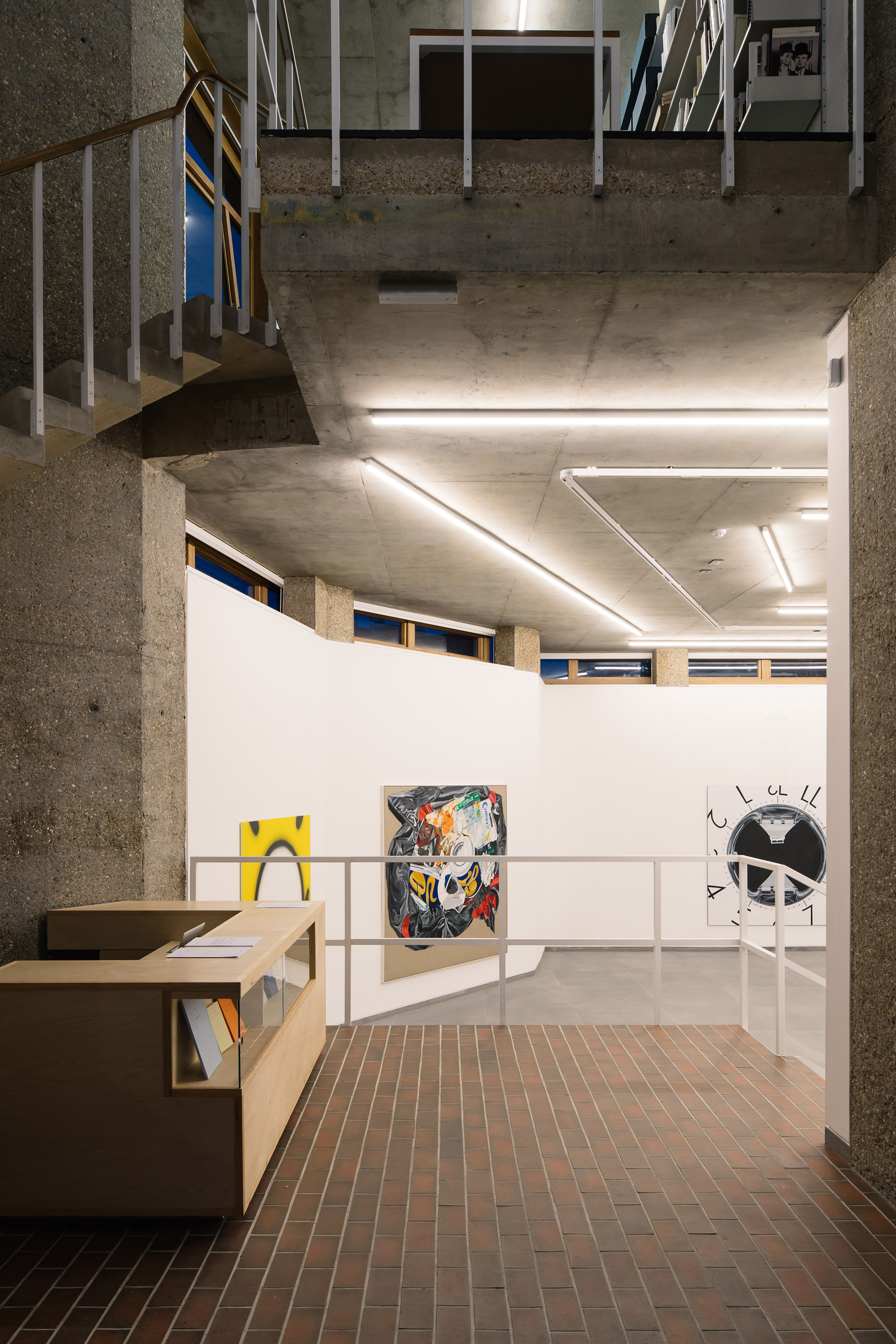 The 12-sided plan creates more surfaces inside the gallery space on the ground floor, which is accessible from an entrance facing Tyers Street.

A separate entrance opens onto a private stairwell leading to two apartments that helped to finance the project. The apartments are sandwiched between a live-work studio for artists and an events space at the top of the building. 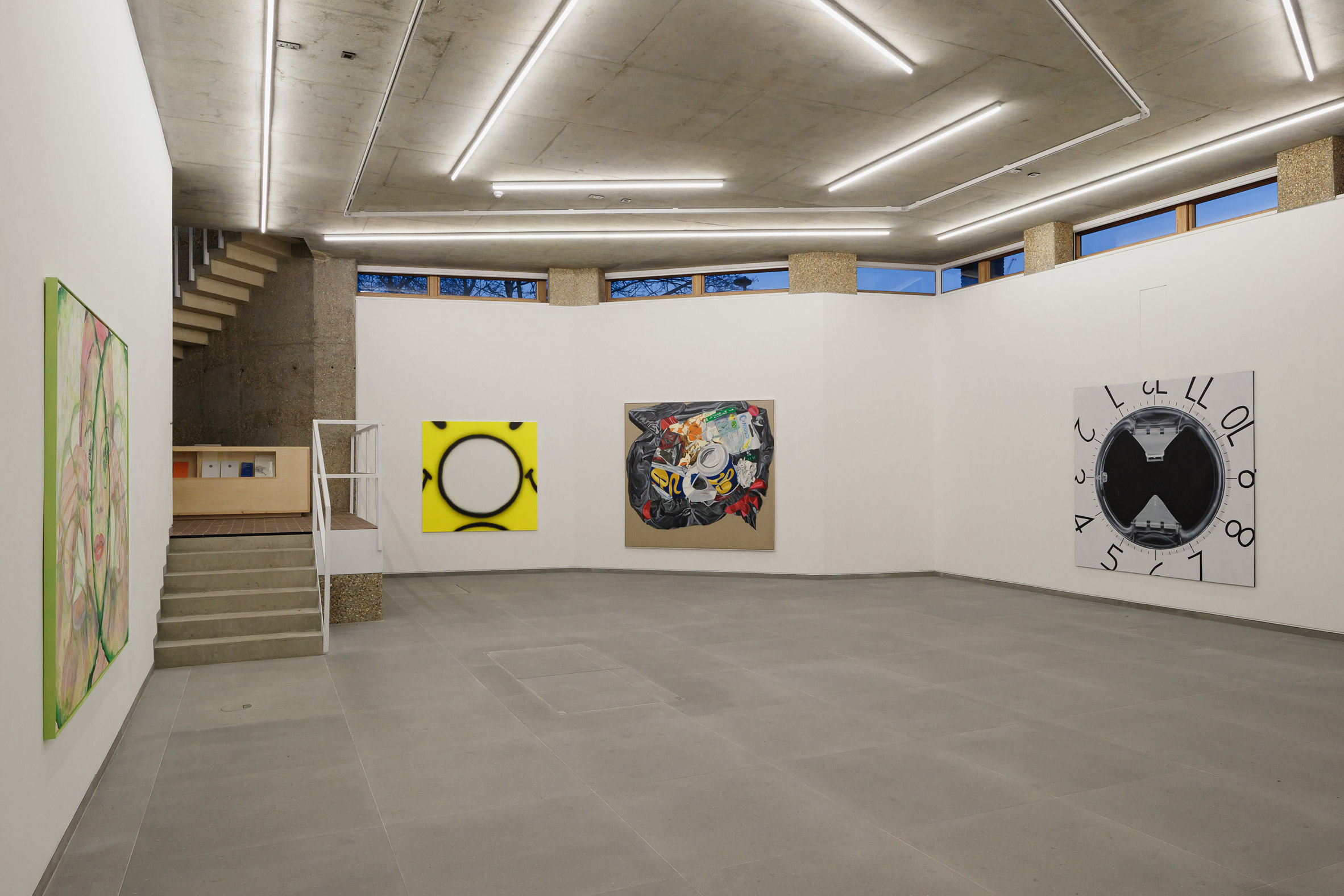 The reception area features a simple desk and display unit next to concrete steps that descend to the slightly lowered gallery floor, which is illuminated by clerestory windows.

The events space on the upper storey is lined with glazing that opens onto a terrace sheltered beneath a cantilevered canopy. 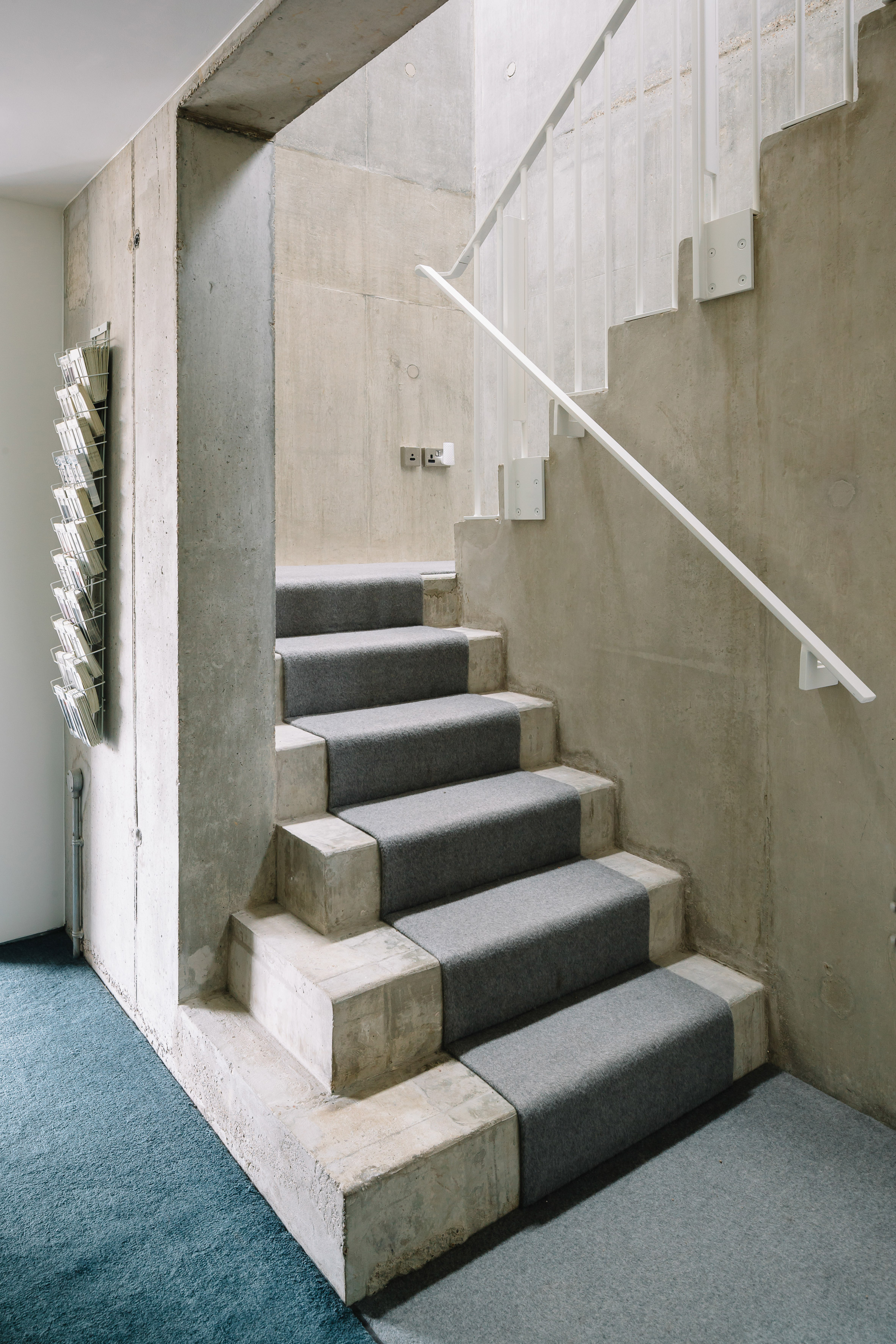 Several of the artists that the gallery works with were involved in the design process and contributed to specific details that add to the building’s character.

The large, geometric oak windows set into the angled brick facades were designed by Paris-born artist Marc Camille Chaimowicz, and Brussels-based Lucy McKenzie was responsible for the hand-painted trompe l’oeil ceramic cladding added to the balconies.

Narrow doors once cut into floors or walls by artists needing to pass canvases through inspired Californian artist John Knight to propose a vertical slot that connects the gallery inside with gardens outside.

“The artists involved all had views on architecture, which really enriched the whole process,” said Horne. “Although the building doesn’t open up to the park, these artistic gestures give something to the park.” 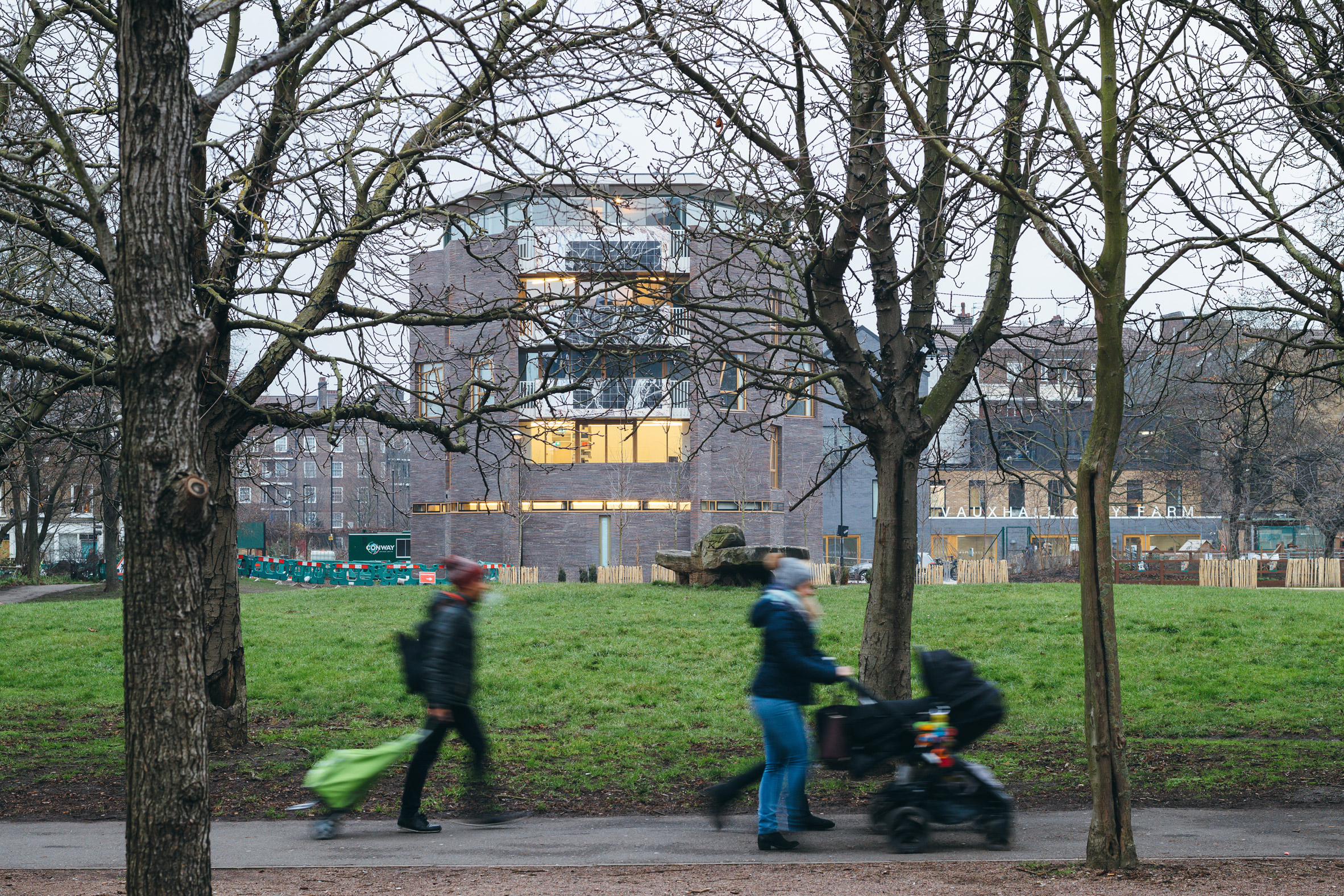 Materials including handmade bricks, the oak window frames, exposed concrete and basalt flooring introduce varying tones and textures throughout the interior and exterior spaces that add to the building’s presence. 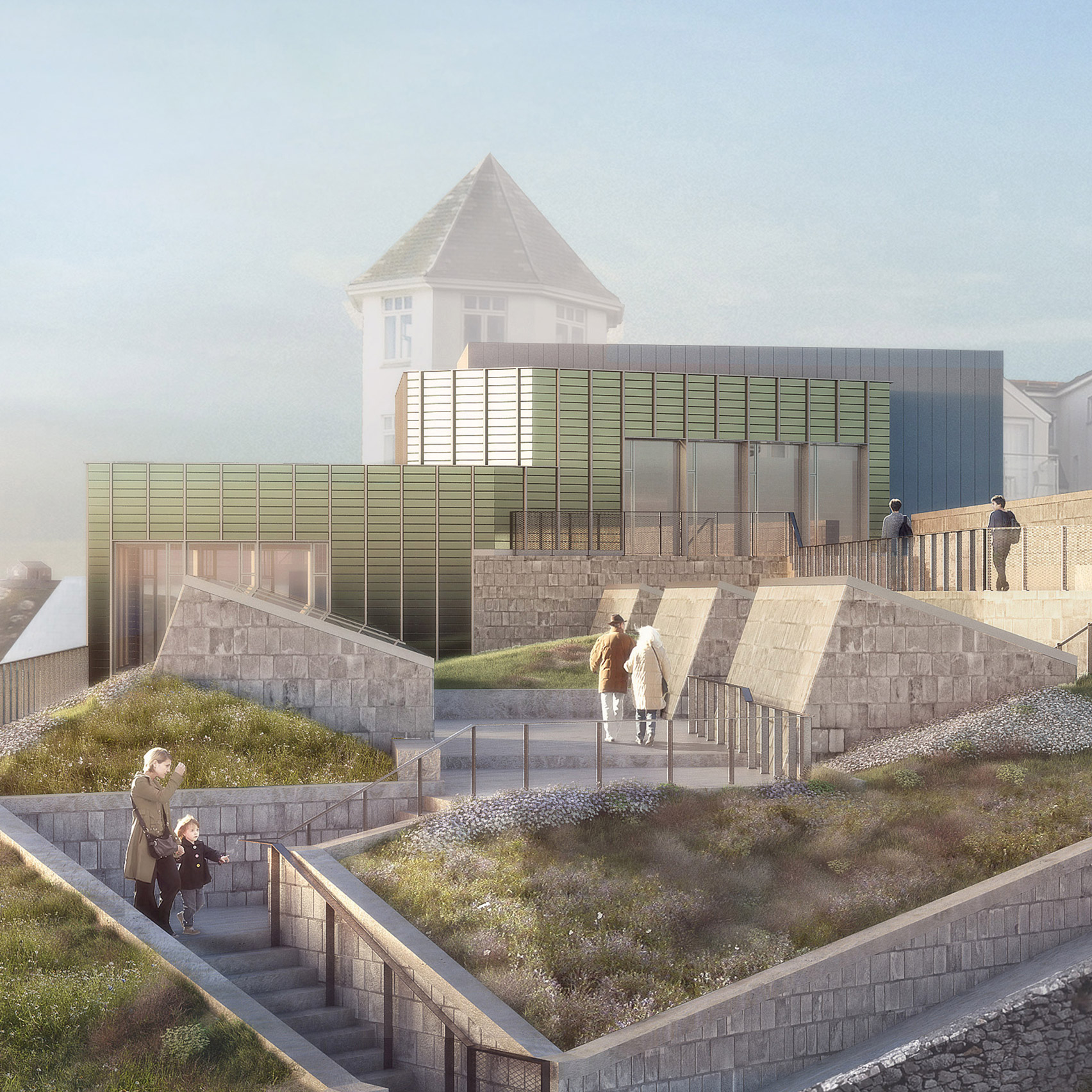 Trevor Horne Architects recently completed a home on the shores of Canada’s Lake Ontario that makes use of similar brickwork, but features an irregular zinc-clad roof that references the area’s agricultural buildings.