Zaha Hadid Architects has released a series of black-and-white photographs showing construction of the vast atrium inside its 207-metre skyscraper in Beijing.

The newly released photographs show the building’s twisted structural skeleton at about three quarters complete, with three of the walkways that wrap the central atrium in place.

Zaha Hadid Architects report that the 47-storey Leeza Soho is scheduled to reach its full 207-metre height next month, with the tower’s completion planned for late 2018.

Designed by Zaha Hadid before her death last year, the skyscraper is located in the Lize Financial Business District – a new business, residential and transport hub in southwest Beijing. The 46-storey Leeza Soho will feature a mix of offices and shops.

The tower rises as a single volume divided into two halves on either side of the new subway tunnel. As it rises, the atrium twists at 45 degrees to orientate the higher floors with the east-west axis of Lize Road – one of west Beijing’s main streets.

In the centre, a soaring central atrium extends 190 metres through the full height of the building, connecting the two halves together.

Once completed, the atrium is expected to be world’s highest – a title currently held by the Burj Al Arab hotel in Dubai, which has an atrium spanning 180 metres.

The shape of the atrium creates convex openings that run up either side of the tower to allow for plenty of natural light and views of the city from the centre of each floor.

Walkways bridge the cavity at different levels, while a glass facade encases the two halves of the tower in a single cohesive envelope.

The tower is the latest of four projects that London firm Zaha Hadid Architects has designed for the developer Soho China, including two others in Beijing.

The Galaxy Soho building is made up of four main domed structures, while the Wangjing Soho commercial complex features three pebble-shaped towers located midway between Beijing Capital Airport and the city.

The firm is also working on a 185-metre tower in Melbourne, and has also revealed a proposal for a supertall tower at 666 Fifth Avenue in Manhattan, which will be developed by the family of president Donald Trump’s son-in-law. 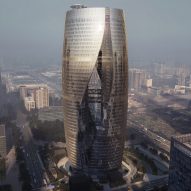