Located in Valencia’s University district, the colourful store is the second outpost of smartphone and gadget repair shop Doctor Manzana. 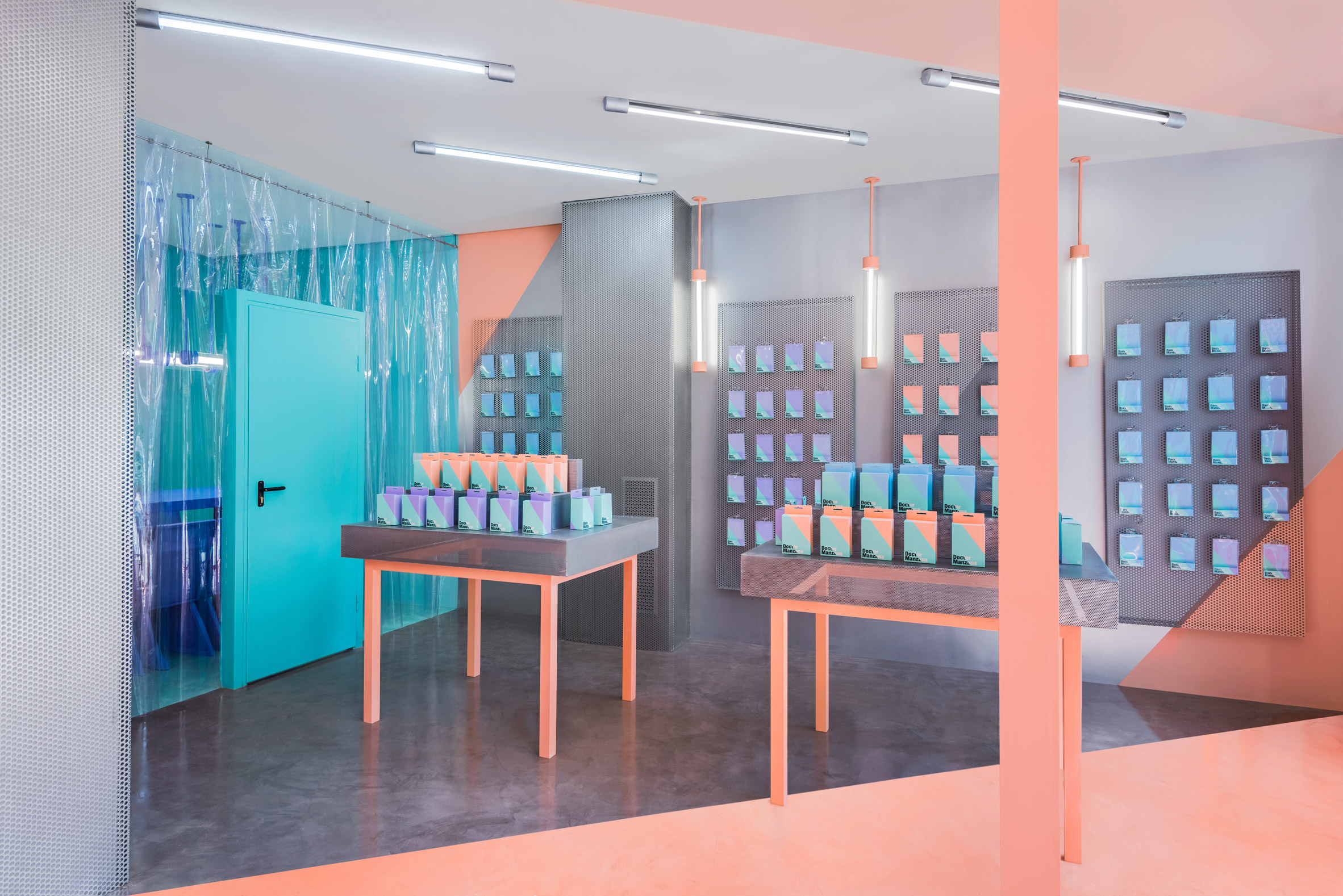 Having already designed Doctor Manzana’s first retail store back in 2013, local studio Masquespacio, headed-up by Ana Milena Hernández Palacios and Christophe Penasse, wanted to use the same bold colours and patterns that they had introduced four years ago but also wanted to add in some new elements. 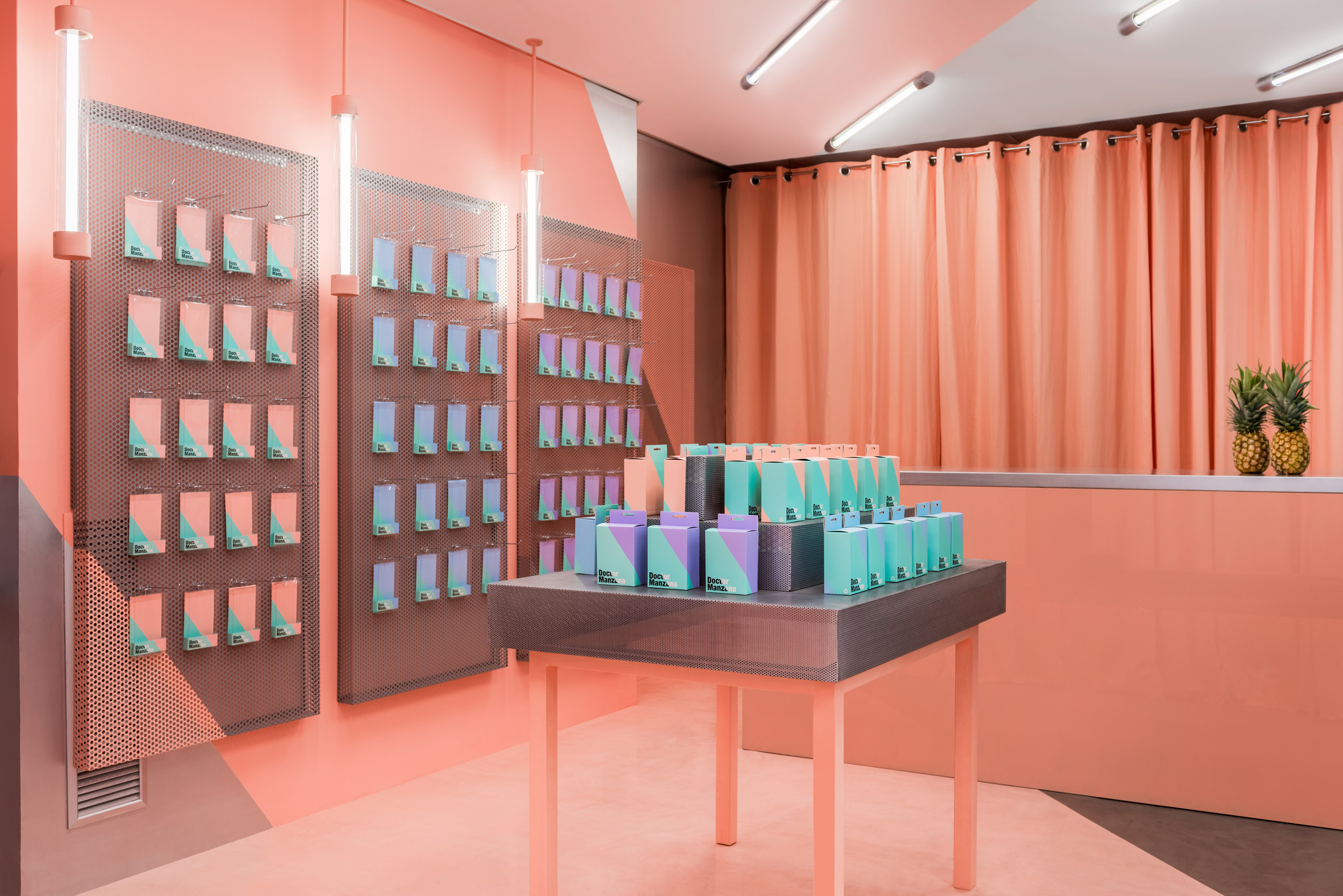 While one half of the space is painted salmon pink, the other has a silver metallic finish.

The blocks of colour are applied to the walls, floor, ceiling and fixtures at 54-degree angles, which the designers say is a reference to the angle that a touchscreen device is held at. 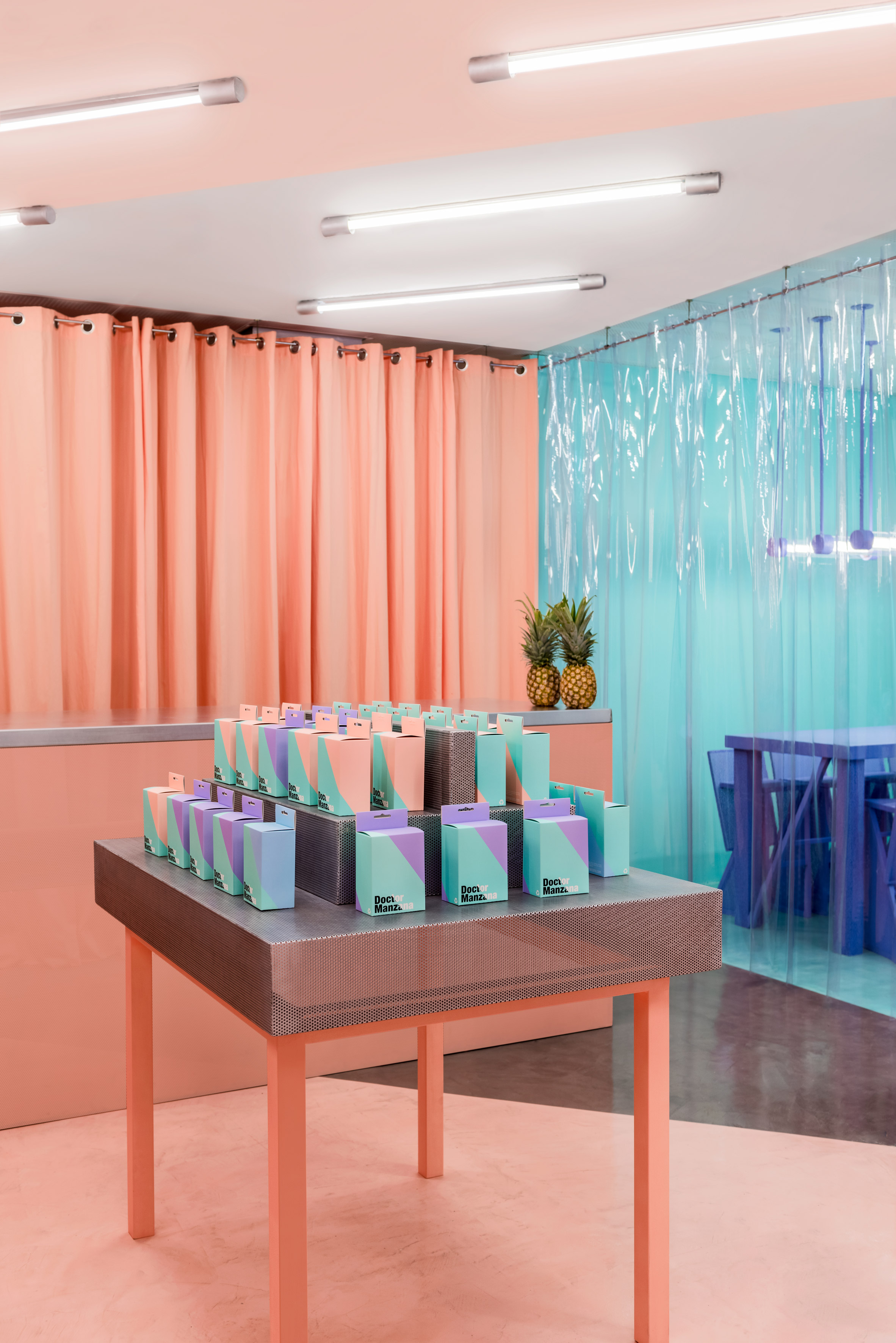 “Besides the four different colours – green and blue as a reference to the doctor, salmon for the fashionistas and purple for the geeks – the metal adds an industrial touch that reminds us of the laboratories,” explained the designers.

The new store has a larger proportion of metal finishes than the original location, as well as new storage and display elements made from various types of metal mesh. 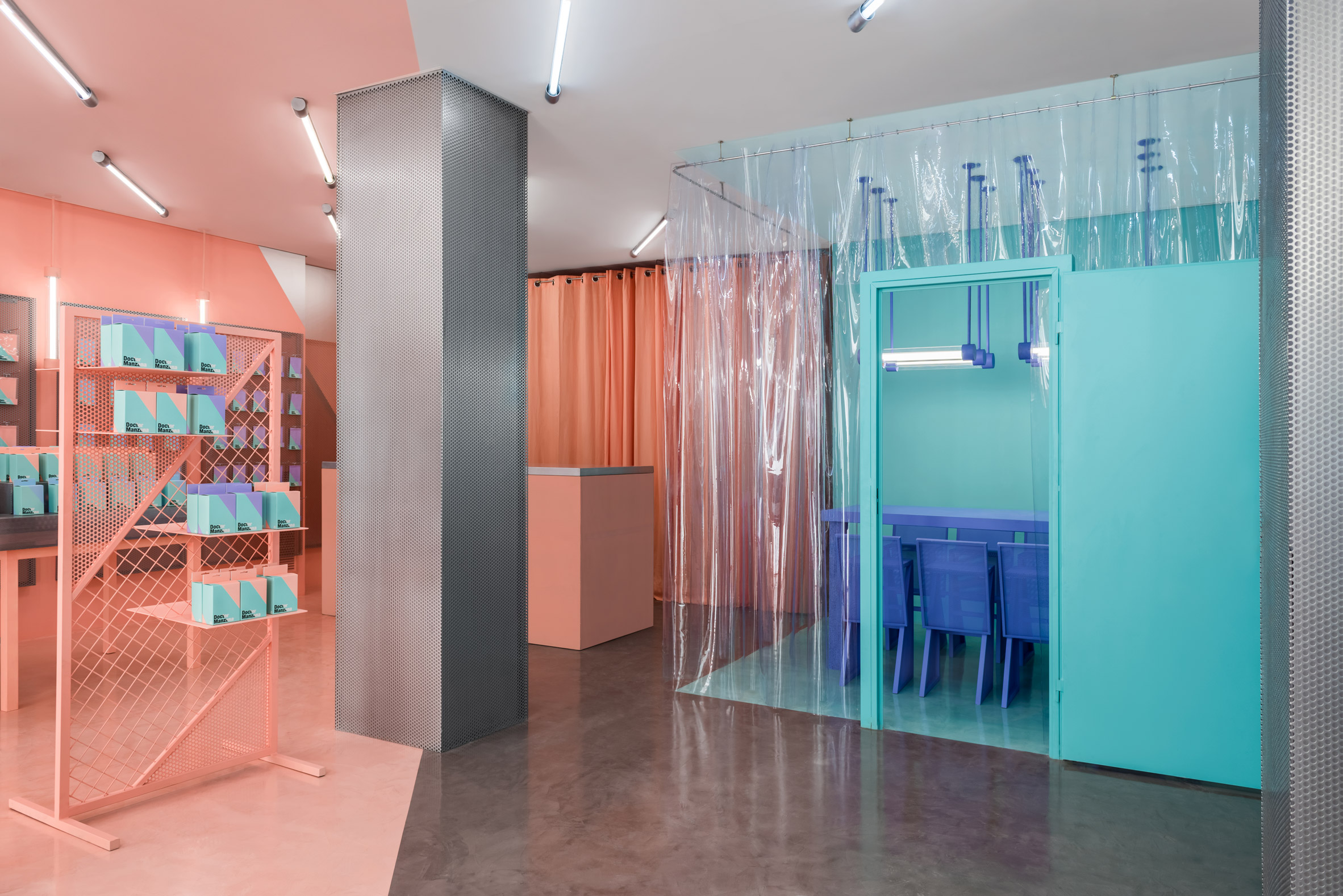 A separate bright blue space in the corner of the store can be used for workshops and talks. Enclosed by see-through plastic curtains, the space is furnished with purple stools and a table designed by Masquespacio.

The stool will be the first official product sold directly through Masquespacio’s new sub-brand Mas Creations, which was set up to sell the duo’s furniture, lighting and accessories designs. 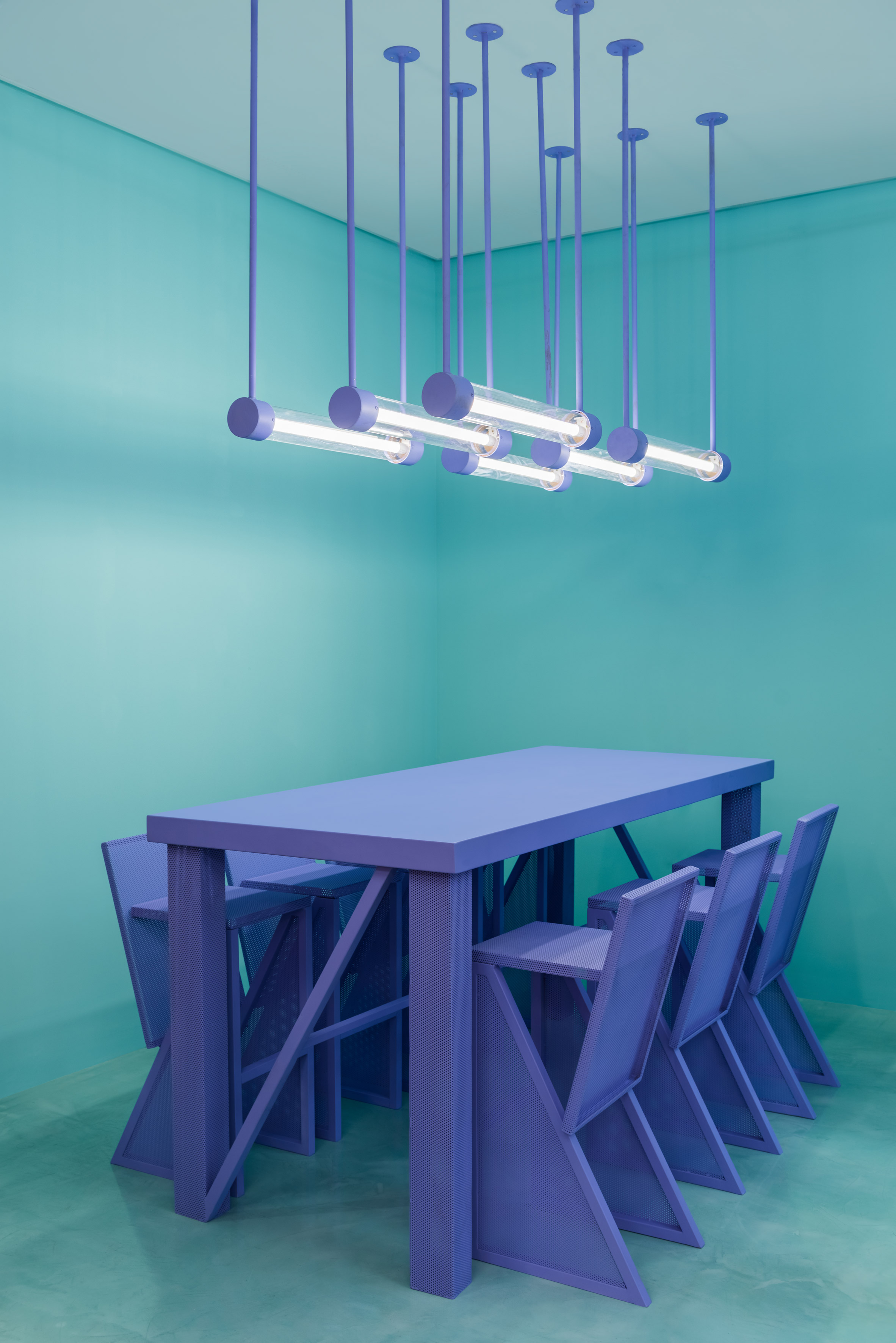 Masquespacio was launched by Hernández Palacios and Penasse in 2010. In the past, the design studio has designed toadstool-shaped furniture for Spanish brand Missana and a colourful Memphis-inspired interior for its own studio in Valencia.