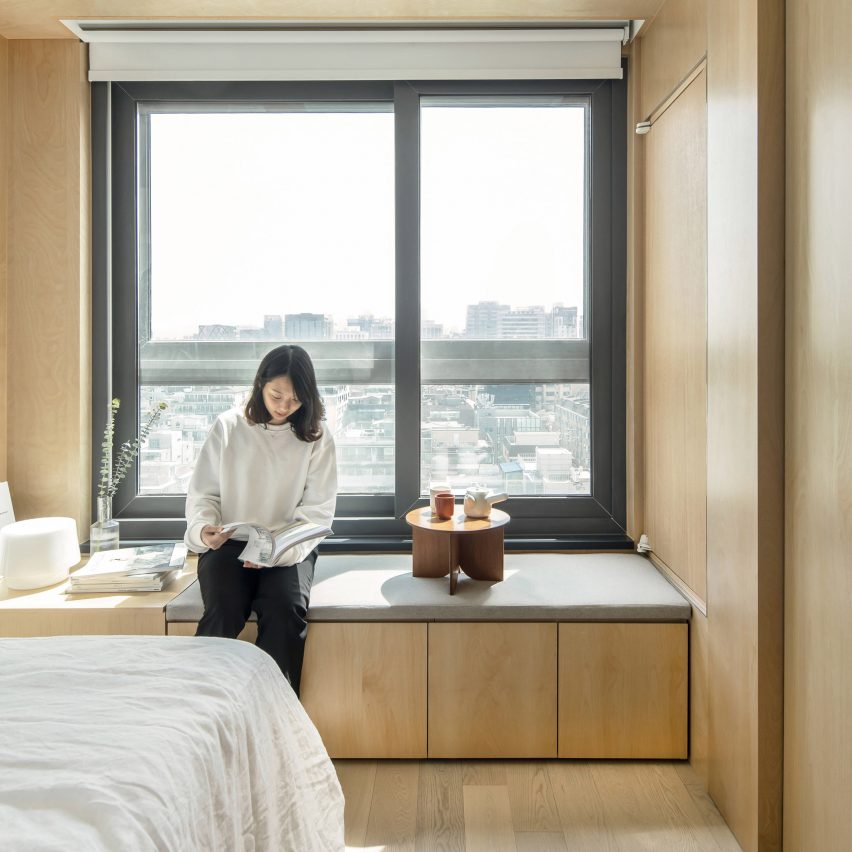 Interior designer Ian Lee has lined the walls of the LIFE micro-apartments in South Korea with birch wood to offer tenants pared-back spaces that they can personalise.

The block contains a total of 140 rooms, which vary between 16 and 23 square metres in size, alongside shared living areas that Vancouver-based Lee also designed.

Lee’s goal for the LIFE apartments was to create deliberately simple, timeless interiors that were visually uncluttered.

While helping to distract from the small size of the rooms, this offers tenants the opportunity to create homely, private spaces with their own furniture and belongings.

“Like in many densely populated cities, most young adults in Seoul struggle to find homes as housing prices climb,” explained Lee.

“I wanted this co-living space and the community it would build to be an accessible alternative to traditional housing options that can eventually give its residents a sense of belonging.”

“One of my aims in designing these rental units was to find that balance, where the space feels timeless and comfortable as it is, but also like a blank canvas for tenants to personalise,” Lee continued.

“The overarching goal was to evoke a sense of home.”

Each apartment is fully equipped with a private kitchen and bathroom, with storage and appliances built-in or hidden within the birch-lined walls to maximise useable space.

Some units are fitted with sliding glass partitions that can be used to divide the flats offering tenants flexibility while ensuring natural light can still filter through.

Lee chose birch as the main material for the micro-apartments to create a cosy finish, but also because the material forms a neutral backdrop for furnishings.

The only decorative elements he has included are playful arched cut-outs, reading nooks and window seats, which he hopes contribute to the cosy aesthetic.

“Rental homes can feel generic, cold and utilitarian,” Lee explained. “The soft spatial elements like arches and curves were used to infuse warmth and emotions into the rooms.”

The shared living spaces, which were not photographed, include a communal kitchen, workspace, lounge, gym and rooftop garden.

Finished with an equally minimalist design, these are hoped to help foster community amongst tenants.

Other micro-apartments on Dezeen that feature wood-lined interiors include A Little Design’s 17.6-square-metre residence in Taiwan, which features built-in, space-saving furniture.

Elsewhere in Taiwan, the studio also designed a 22-metre-square apartment with storage spanning one entire wall, covering the 3.3 metres from floor to ceiling.

Photography is by Texture on Texture.